Let's Try This All Over Again

Over the course of four weeks (as part of Action Adventure April), we've talked a lot about the James BondThe world's most famous secret agent, James Bond has starred not only in dozens of books but also one of the most famous, and certainly the longest running, film franchises of all time. series, going through all the movies and watching how they connect up, feed off each other, and slowly, over time, begin to create trends that influence the whole of the series. Call it a "house style", but at a certain point you can just tell you're watching a Bond film, know the ins and outs of the series that you can guess not only the general plot of a movie but each and every one of the beats, twists, and turns, all because the films, eventually, all kind of become the same. Same story, same ideas, same Bond (even when it was different actors). 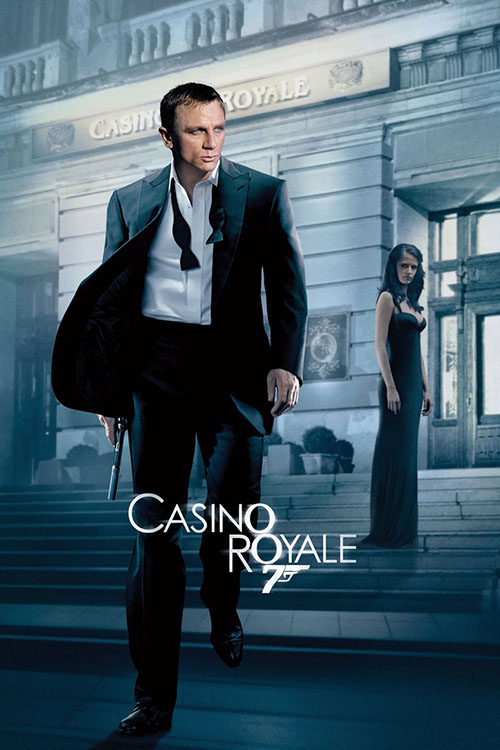 Sensing that the Bond series had become to fantastical (with all the silly gadgets and over-the-top locales Bond had started going to), along with the fact that the series had become quite staid in its later years, production company Eon elected to reboot the series, scrapping everything that came before and creating a new Bond with Daniel Craig, one that was at the start of his career, first learning to be a 007 and handle his license to kill (TM). The results were nothing short of fantastic.

Look, I am not a Bond fan (as if that wasn't already clear from these past reviews). I have been surprised by the fact that there were a few movies in the classic series that I actually did enjoy (On Her Majesty’s Secret Service chief among them). The first Bond movie I ever saw that actually hooked me was the 2006 Casino Royal (which I was dragged to when it came out in theaters) and I liked it specifically because it didn't feel like a Bond movie. If anything, it drew its inspiration from The Bourne Identity and it's ilk, a much more hard hitting and raw look at the espionage genre. Casino Royale tapped into that and used it to great effect.

The credit is due, in no small part, to Daniel Craig. I've had issues with previous actors in the series because it never felt like they found the right blend of elements to properly play James Bond. Connery was too above-it-all, Moore was too silly, and Brosnan even worse. While I liked Lazenby I do have to admit he was a tad nebbish, a little too green for the role, and while I thought Brosnan had the right charisma and command of the screen, even he wasn't up for the action elements the series required. Bond needs to be suave and cool and collected, yes, but he also has to be an ass-kicking, take no prisoners force as well. That's what the movies demand.

It's those elements that Craig puts on display in Casino Royale. He has the ability to switch off, to be cool and removed, using his license to kill without compunction. But then he can turn it on, allow that glimmer of charisma to leak out of his eyes, and suddenly he's a human again, maybe not warm but certainly alive. Craig can play the killer and the cad, both side required to be Bond, and he can sell it so it feels not like some immature male fantasy but because it's what the job of a secret agent requires. 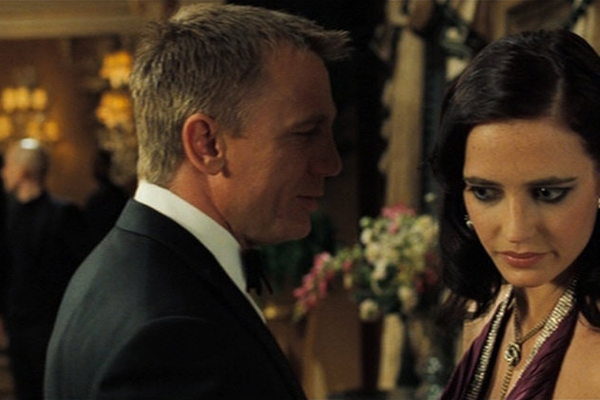 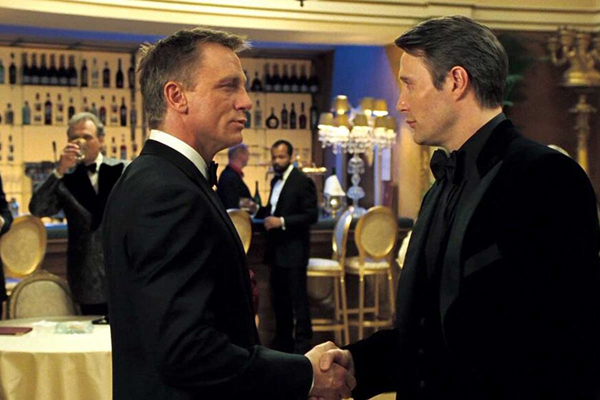 Plus, the man can kick some ass. The action in this film certainly feels like it learned from Bourne will long and elaborate action sequences that feel crunchy and real. The opening of the movie is great, with a long chase sequence between Bond and a terrorist, where the two go running across a third-world city, tearing through a construction site before leading to a gun fight at the end. Yes, it does use a little too much parkour at times (a big trend in action movies of the mid-aughts that has certainly fallen off since) but there's no denying that the stars are really doing their own stunts, are totally committed to making this sequence as hard and believable as possible. It's a stunner for the series.

Yes, there are more great action sequences in the film (first fights and gun play and a final climactic chase that leads for explosions and sinking buildings), but what's so great about Casino Royale is that it finds a way to make even the quieter sequences compelling. Much of the middle of the movie takes place at the titular casino where Bond has to drain the chips off his mark, Le Chiffre (a perfectly understated Mads Mikkelsen), so as to put a crimp in the plans of the evil organization (don't say SPECTRE just yet) that Le Chiffre works for. Watching people play cards games isn't usually compelling (watch all the times they played Baccarat in the previous films to see how it can be really boring to watch), but by switching the game to something more fun, poker, and filming the sequences with some tension, the movie makes the card games as compelling as the action.

The most compelling part of the film, though, may just be the connection between the two leads, Craig's Bond and Ava Green's Vesper Lynd (the "Bond Girl" of the piece). As I've noted in the past, Bond Girls tends to be shallow and disposable characters, someone for Bond to toy with by never someone he cares about (that is, of course, part of the fantasy). It's rare for him to make a real connection, and rarer still for the actors to convey it properly. Green, though, is a phenomenal actress who commands the screen (there's a reason more than one reviewer called Penny Dreadful the "Eva Green Presents the Eva Green Show, Starring Eva Green" because, frankly, you weren't watching the show for anyone else), and she brings her acting chops here to make Lynd into a character equal to Bond in charisma and personality.

Yes, Bond falls for the Bond Girl this time, but that's part of the point of it. This early in his career Bond hasn't put up all the firewalls to keep people out, to be "above it all" and disconnected so that the women can just be used for fun. Hell, with the way the series is created, I don't think that's ever going to be part of the character moving forward. But here you can really feel the connection between the two -- the attraction, the fire, the emotion -- and it works so well. This is the spark that we saw back in On her Majesty's Secret Service and we finally have a Bond/Bond Girl pairing to rival that of the one in the classic film. 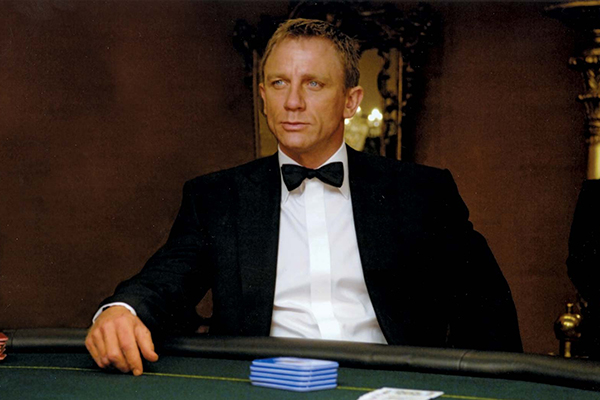 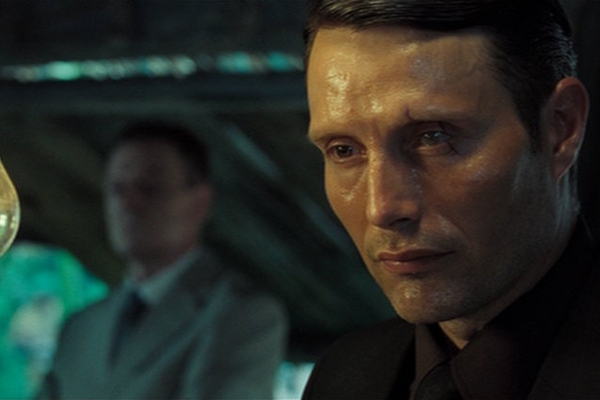 If there's a misstep (and spoilers for a 14 year old movie) is that Vesper dies at the end. Yes, it part of the point of the story and, yes, she kills herself to save Bond. In a way it's all understandable. It's not quite a fridging moment, although it does still serve as motivation for Bond moving forward, but at least it makes sense within the bounds of the film. You know why she does what she does, and you feel the pain it causes Bond, and that's not nothing.

Truly, Casino Royale finds a way to reinvent Bond and make him into an interesting and compelling character. The series has always had a habit of borrowing from other films and trends around it (Star WarsThe modern blockbuster: it's a concept so commonplace now we don't even think about the fact that before the end of the 1970s, this kind of movie -- huge spectacles, big action, massive budgets -- wasn't really made. That all changed, though, with Star Wars, a series of films that were big on spectacle (and even bigger on profits). A hero's journey set against a sci-fi backdrop, nothing like this series had ever really been done before, and then Hollywood was never the same. and Moonraker, for example) but there are worse things to emulate than the first Bourne film. The fact is that this movie takes elements, past and present, and merges them together into a film that is far more than the sum of its parts. Craig's films are markedly better than what came before (even if the rest of his run is arguably not as good as this first effort) and a sign that there is still life to be had in this 60-plus-year franchise.