Will the Real James Bond Please Stand Up

The 1960s were certainly a high point for the James BondThe world's most famous secret agent, James Bond has starred not only in dozens of books but also one of the most famous, and certainly the longest running, film franchises of all time. series. First launching with Dr. No, the films had consistently made 100-fold returns on their investment, giving EON Films (as we noted over in our review of On Her Majesty’s Secret Service) a license to print money. It's no surprise that other companies were salivating at the prospect of making their own James Bond movie, they just had to find a way to pull it off.

Enter Columbia Pictures, the studio who had wisely picked up the rights to the first James Bond novel right after it was released. It's worth noting that the rights to the world's most famous secret agent were a tangled mess for years, with the EON films claiming the license via the original screenplay that predated the books. The novel was a separate beast, technically, and later the rights over the screenplay would even lead to another competing film in the series (the Thunderball remake, Never Say Never Again). Essentially, if you were a Bond fan, in theory you could have more material to sate your tastes than you could ever possibly want.

The real issue, though, is that no one should ever have wanted the 1967 Casino Royale. This film is, without a doubt, a mess, having a long, troubled production that led, in the end, to a complete and utter cinematic disaster. Watching through Casino Royale felt like a dare, as if the production team slapped together whatever they could come up with from all the footage they somehow shot and then said, "it's a James Bond film, so why not give it a try, eh?" Whatever you do, don't do it. Don't watch this movie.

The film opens with the heads of various intelligence organizations going to meet with the retired James Bond (David Niven) at his private estates so they can lure him out of retirement to take on SMERSH, the evil once-Russian criminal organization (who take the place of SPECTRE in this film as that organization was tied up in the EON rights). Bond, though, flatly refuses, preferring to stay retired, so M (John Huston) has Bond's estate blown up as kind of "help us or we'll do even worse" motivator. Bond readily agrees and sets right on the case.

Well, after first taking M's ashed back to Scotland as M died in the explosion at Bond's estate (not exactly the best plan, all things considered). There, at M's estate, he meets an evil secret agent pretending to be M's widow, along with all his "daughters" (also SMERSH agents), and they all attempt to kill him before he escapes. However, this clues him in to the fact that SMERSH is well aware of his one weakness: women. So, to counter all their plans, James brings in every MI6 agent -- Vesper Lynd (Ursula Andress), Evelyn Tremble (Peter Sellers), Mata Bond (Joanna Pettet), Miss Moneypenny (Barbara Bouchet), and Coop (Terence Cooper), among others -- and codenames them all "James Bond 007" to throw SMERSH off the scent. This gives the Bonds time to each research their own part of the mission: to find the primary agent of SMERSH, Le Chiffre (Orson Welles), put a stop to his plans to get the money to fund SMERSH, and then end the evil organization once and for all. 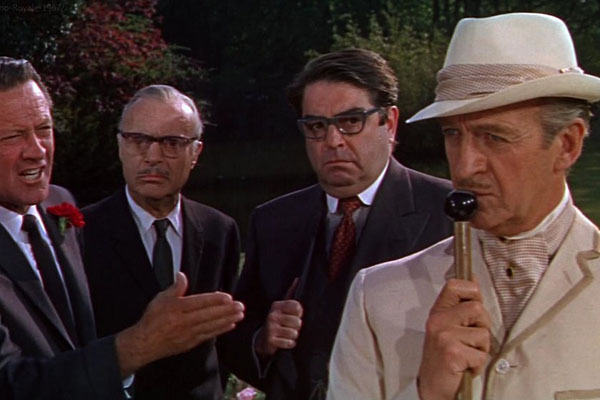 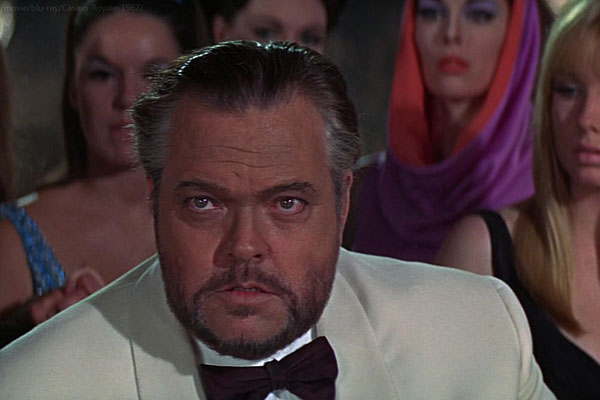 When I noted that Casino Royale '67 is a mess, I mean that from every angle. Part of the problem is the fact that the film doesn't know what kind of tone or style it wants. Sometimes it plays the material straight (often when Peter Sellers in on screen), other times it goes for dry British comedy, or overly broad slapstick. The film wavers from one storytelling style to the next without ever settling down and doing any of it properly. If it could have focused, found a groove, and told a story that worked the film really could have been something.

This is evidenced by the plot line following Sir James Bond after he reached MI6 (and ignoring essentially the first half hour of the film because, ugh, it's garbage). The storyline of James organizing all his other agents, pulling the works together, giving out his orders, all comes together as a delightfully told farce, dry and sarcastic with just enough momentum to really get this part of the film humming. Niven, honestly, is the treasure of this film, selling even the worst material with everything he has -- he's not always successful but the best bit of the movie are all due to his performance.

It's when the film pulls away to follow any of the other agents -- Seller's Tremble or Pettet's Mata Bond as the primary other storylines -- that everything really falls apart. Each of these agents get involved in stories set to de-fund SMERSH and put the screws to the organization, which would be funny if their sequences went anywhere. As serious spy drama the scene don't work because they take forever to reach their goal and, very rarely, illuminate any part of the plot of have anything of substance or consequence. At the same time, though, there's no humor in these scenes (unless you find Sellers dressed up as Hitler for no reason inherently funny). They;re overly long skits that go nowhere, illicit no laughs, and then die before the film finally cuts away to go do something else useless.

Other agents spend time getting introduced, like Coop, only to have absolutely no storyline in the film whatsoever. Sir James sets it up that he needs a secret weapon, an agent immune to the charms of women who can still act like catnip to them, and that's Coop. We even get a training sequence of Coop throwing off the advances of every women around him, obviously setting up his big infiltration sequence later in the movie. Except, Coop the disappears right up until the end of the film and none of the setup for his storyline goes anywhere. Believe me, this happens a lot, with plenty of plot ideas dropped then ignored, skipped over, or completely forgotten. 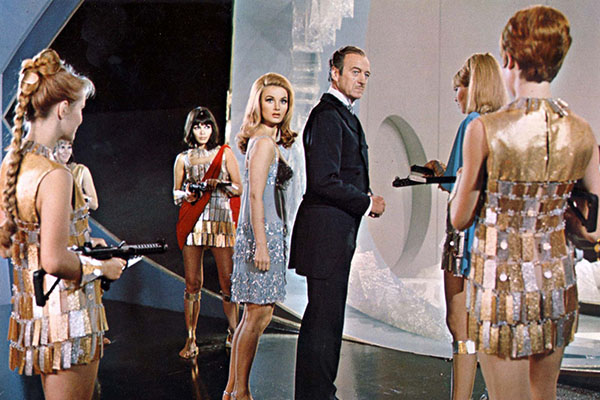 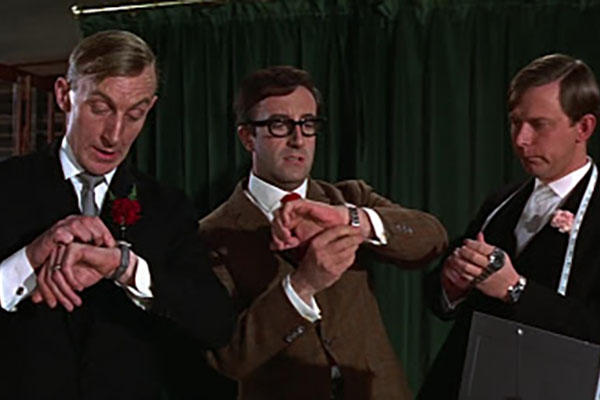 Of course, that all goes back to the troubled nature of the film which went through multiple directors and writers as the film was pulled together, shot, and edited. Plus, Sellers was quite unhappy with the way the film was put together and often refused to show up on set, meaning that the Tremble character, a key part of the back half of the plot, had to be stitched in via outtakes and footage meant for other sequences. Everything ends having a very rough and unfinished quality to it with nothing seaming together properly and very few things paying off the way they're supposed to.

I kind of get what the producers wanted, a big, celebrity blow-out film in the vein of It's a Mad, Mad, Mad, Mad World (which had come out four years earlier to great acclaim). The fact is, though, that Casino Royale lacked all the things that made that other movie such a success, like style, or story, or even humor. This is a big, hang-out film that actively discourages you from hanging out with it. It's a rough, boring, hard watch to get through, worthy of paying attention to it only because of it's name and connection to a much more interesting franchise. If it didn't have the character of James Bond in it, Casino Royale would have been (rightly) forgotten long ago.