And Back to the Old Way

I think it's fair to say that I wasn't all that interested in Diamonds Are Forever going into the film. As I noted yesterday in my review of On Her Majesty’s Secret Service, I was rather a fan of George Lazenby's version of James BondThe world's most famous secret agent, James Bond has starred not only in dozens of books but also one of the most famous, and certainly the longest running, film franchises of all time. and, after watching that film for the first time, I was more than a little sad to realize we wouldn't get his secret agent wandering through a series of films. Instead, the actor left the role and EON Productions decided they really had to have Sean Connery back for the lead role. 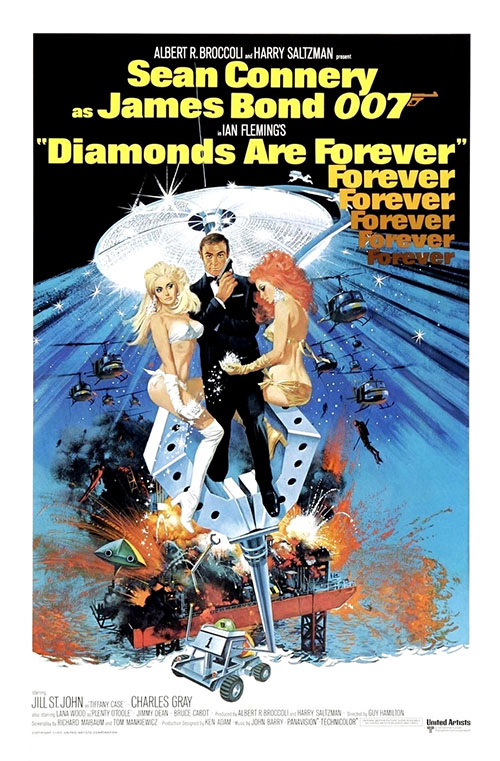 Don't get me wrong, Connery could bring a certain style and performance to the role of James Bond... when he wanted to. He was fantastic in Dr. No (even if that movie was horribly uneven), and his tete-a-tete with Auric Goldfinger in Goldfinger is what drove that movie. At the same time, though, it was clear that Connery had grown tired of the role, and many times he ended up phoning in his performance, acting above it, like it was all too silly, instead of investing in Bond.

Of course, fact of the matter is that many of the movies are pretty silly. Even the best of the set (like Goldfinger and On Her Majesty's Secret Service) had parts that were pretty awful (the final chase down the mountain between Lazenby's Bond and Savalas's Blofeld is a particularly atrocious sequence that just doesn't work). We're talking about a series with the least covert secret agent (this side of Sterling Archer) getting into near-sci-fi scrapes, going up against villains that, no matter how many times they get thwarted, still think it's a good idea to lock the secret agent up instead of finally, just finally, putting a damn bullet in his head. It's dumb, but sometimes it works in its own cheesy way.

To sell it, though, you have to have an actor that is willing to invest in the cheese of it, to make it somehow come back a little but to reality that the stupidity of what we're watching someone works again. With EON bringing Connery back, it wasn't for his performance just for his name, so my fear was that Connery could collect a fat paycheck ($1.2 Mil, reportedly, the highest salary every paid for an actor at the time), do his usual above-it-all performance, and go home a rich and happy man. And, sadly, that's exactly what he did, cutting the legs right out from under Diamonds are Forever before it could even get going.

Fact is that with the right actor, I think Diamonds Are Forever could have been a pretty winning movie (maybe if Lazenby had stayed on and they followed up the story of his dead wife, Tracy, in this film as a B-plot). The film opens with Bond tracking down Blofeld (presumably to avenge his dead wife although that is never mentioned). Then we cut to the main plot, which involves a diamond smuggling ring worth hundreds of millions of dollars. Bond is called in because a number of people start turning up dead in relation to this smuggling operation, and suddenly the Brits have caught wind of just how bad all of this could be. 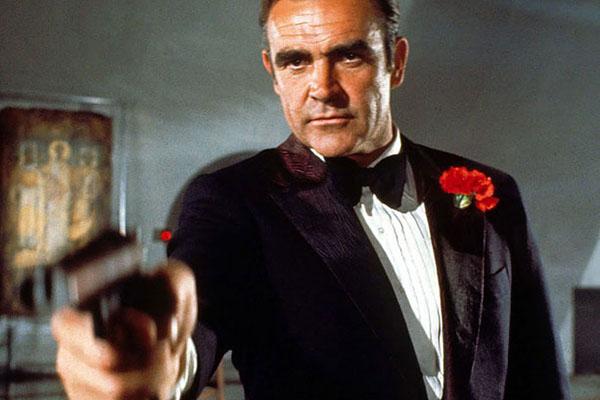 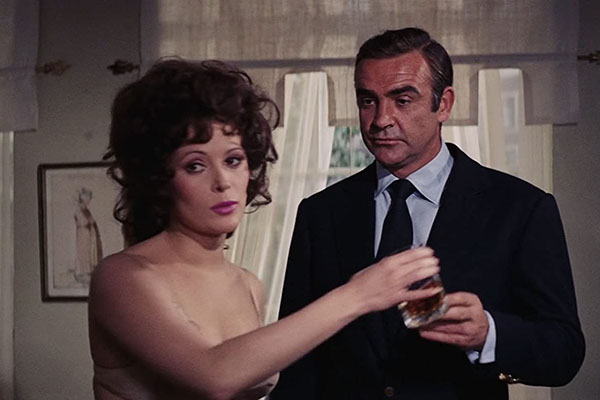 To stop the operation, Bond has to go in and take the role of a diamond smuggler so he can find who is really in charge and how far up the chain this all goes. Of course, in the end we find out that SPECTRE (ugh, always SPECTRE) is behind the whole thing, and it's really not about money but, in fact, about creating a light-refracting super-laser that can destroy any target on land, or in space, with a single shot. So, of course, Blofeld wants to use this weapon to ransom the world and Bond has to stop him. Oh, right, and Blofeld isn't dead, despite what seemingly happened in the first sequence of the film, because he has body doubles. Who knows if any of the Blofelds are real. Naturally, he'll just come back again in the next movie no matter what.

I'm not going to try and argue that the story in Diamonds are Forever is all that great -- it's loose, just really a collection of scenes with Bond casually swaggering through them, without any real, connective tissue -- but with the right actor investing in the story it at least could have been fun. Instead, with Connery's bored Bond at the center of it all, the two-hour-plus runtime for the film feels absolutely interminable. There are amusing moments here and there -- a bit of a tete-a-tete with new Bond Girl Tiffany Case (Jill St. John), some amusing kills from two nasty goons (Bruce Glover and Putter Smith as Mr. Wint and Mr. Kidd) who, let's be honest, should have been the main villains of the movie -- but overall this film just drags, and drags, and then drags some more. It feels less like we're watching an action-adventure film than the casual home videos from James Bond and his trip to Las Vegas.

I really wish anyone else had played Bond this time around than Connery (although, from what I hear, Roger Moore isn't much better). Not only does he seem bored in the role at this point, but he brings that same macho-male dominant attitude with him again (women get slapped a lot in this film, for no reason). I certainly hadn't missed his performance, and that fact that he plays this role like the previous version off the character, without any hint of the story (or grief) that would have come for the character in the intervening movie is seriously annoying.

And, frankly, Connery was looking a touch long in the tooth at this point to play a young, swinging playboy secret agent. Although I hated the 1967 Casino Royale, I did appreciate the one bit of continuity they alluded to (and the reboot series with Daniel Craig has played with): the idea that James Bond isn't just a person but is also a name (and 00-number) that can be assigned to anyone. Connery might have been the bankable name for the franchise, but he was neither the fresh face nor best fit for the role at this point. Women fall at his feet still, but I had to admit that someone who could be their dad going after women at least twenty year younger was more than a little creepy at this point. 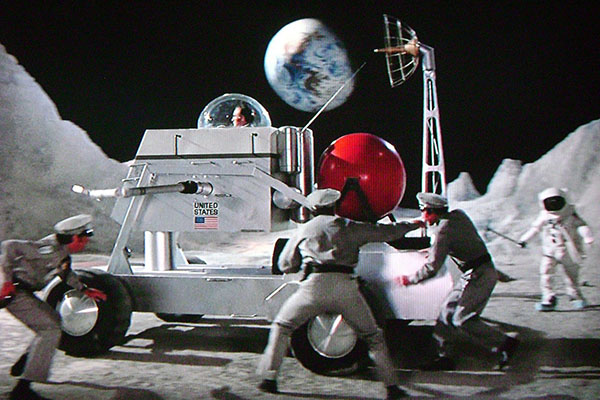 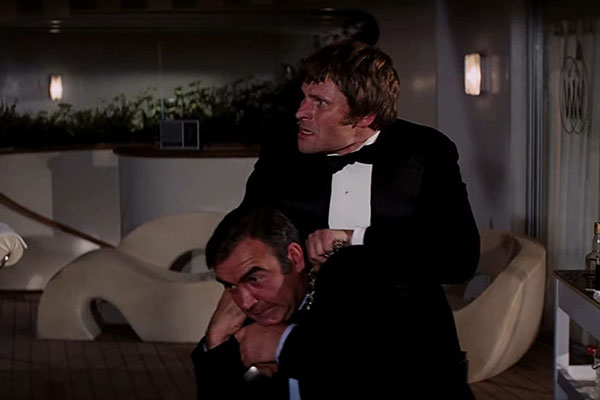 Not that the villain is any better. Blofeld was at his best when played by Donal Pleasance in You Only Live Twice -- a scenery chewing performance just as the actor loved to deliver. When played by Savalas or, as here, by Charles Gray he's like the presence to act as an equal not just to Bond but to all the demands of the plot that are required. He has to come across that a force, an evil genius, a brilliant but terrible madman who controls everyone around him through fear. Gray, though, plays him like a grumpy dad. It's perhaps the worst version of the character yet, and a sad place for the character to exist at this point.

And it leaves me coming back, again, to the idea that this film needed to find a different angle for where it went. Instead of a revival of the Connery Bond of old it should have tried to build off the storyline of On Her Majesty's Secret Service. Even if Lazenby didn't come back, there was a great setup there for a little darkness, a little maturity, a new kind of Bond to grown out of the series. Instead it's a return to the tired old form with, quite literally, a tired old Bond in the lead role. This may not be the worst Bond film in the main series so far (I think I hated Thunderball just a little more), but it certainly ranks among the refuse, for sure.