James Bond Eon Film #19: The World Is Not Enough

So we are definitely descending into what feels like the "Second Moore Era" here. Brosnan is a very likable guy but, as with Roger Moore and his run of film, it feels like the James BondThe world's most famous secret agent, James Bond has starred not only in dozens of books but also one of the most famous, and certainly the longest running, film franchises of all time. films have turned to self-parody. Everything about the movies that people are familiar with -- the locales, the gadgets, the girls -- is turned up to eleven, but the things that actually make for a good movie -- story, acting, consistency -- it ditched. These films are so far removed from what really works in the series that they could almost be another franchise entirely. Add a few more jokes and they'd practically fit in the Austin Powers canon. 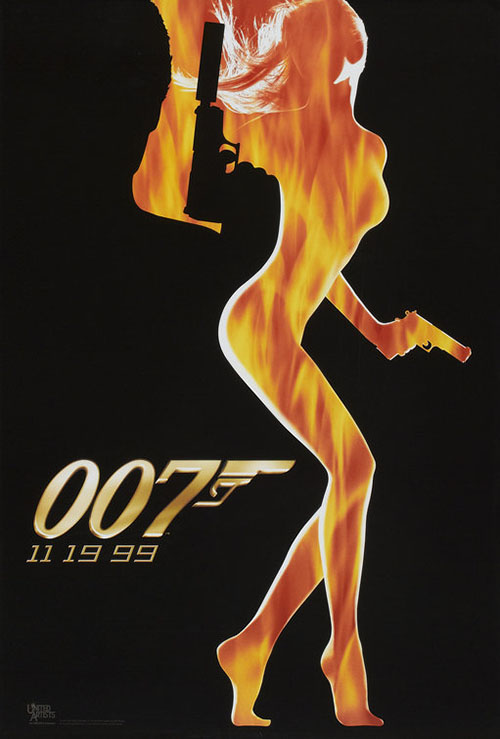 A lot of this is inevitable, really. Franchise fatigue is real and the longer a series goes on, even with a change of actors and locales, deep grooves will form in the well-worn material (we saw that in other franchises like Die HardThe 1980s were famous for the bombastic action films released during the decade. Featuring big burly men fighting other big burly men, often with more guns, bombs, and explosions than appear in Michael Bay's wildest dreams, the action films of the decade were heavy on spectacle, short on realism. And then came a little film called Die Hard that flipped the entire action genre on its head., The Fast and the FuriousStarted as a film about undercover policing in the illegal street-racing community, this series has grown to encompass a number of different genres and become one of the most bankable franchises in the world., and slashers like HalloweenThe franchise that both set the standard for Slasher horror and, at the same time, defied every convention it created, Halloween has seen multiple time lines and reboots in its history, but one thing has remained: Michael Myers, the Shape that stalks Haddonfield. and Friday the 13thOne of the most famous Slasher film franchises, the Friday the 13th series saw multiple twists and turn before finally settling on the formula everyone knows and loves: Jason Voorhees killing campers 'round Camp Crystal Lake.). There is only so long a series can go on before it starts to tread its own material, over and over again, losing sight of what made the series work as it recycles the same tired concepts in the chase for "bigger thrills". You combine that with the genre tropes of the late 1990s and early 2000s -- sexy women, tired one-liners -- and you have a recipe for a Bond that doesn't have any sense of his own past history, of what really worked for the character.

Case in point, The World is Not Enough gives us yet another terrorist, Renard Zokas (Robert Carlyle), stealing yet another nuclear bomb (as if these things are the easiest things in the world to get ahold of), so he can threaten the world. Bond (Brosnan), of course, is drawn into the plot through a long and drawn out plot line with a bunch of twists that, really, don't make much sense, and, in the end, if anyone would just have the good sense to shoot Bond when they had the chance, all their evil schemes would work out.

Making this all much worse is the fact that neither of the female leads -- kidnap-victim turned willing accomplice (in a twist I saw coming the moment her character was introduced), Elektra King (Sophie Marceau), nor doctor of nuclear physics Christmas Jones (Denise Richards) -- are played convincingly in the slightest. And, more to the point, they have very little bearing on the story whatsoever. They're decorations, things for Bond to play with on his adventure, but if you excised them from the story nothing would really change. The World is Not Enough is really about a secret agent, a chaos-minded mad man, and their chase across the world. No one else really matters.

Some might argue with that assessment as it's Elektra King that sort of sets the plot in motion. Her character was kidnapped by Zokas years before, and then she fought her way out and freed herself. Now, all these years later it seems like Zokas is back to finish the job, killing her father and seemingly targeting her next. So Bond has to go to her aid and save her, only to figure out (long after we did) that she's a plant, a ruse, and that she's really working with Zokas (because she's his lover). This is supposed to be a revelation, but it doesn't do anything really for the story, at all. 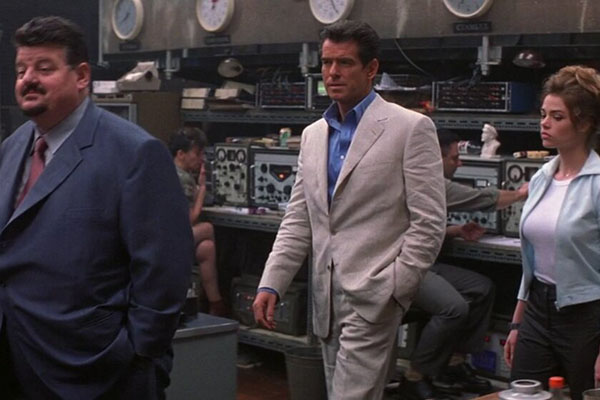 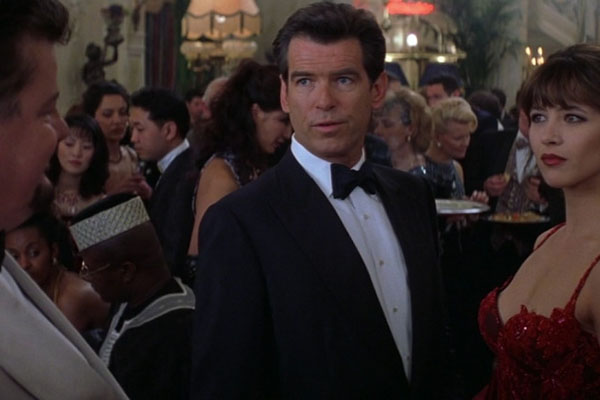 Think about it: what does Elektra contribute to the story beyond the (very mild) shock of her double-cross? Zokas is the one to get the bomb. Zokas has a sub. Zokas does all the leg work and gets the big climactic fight with Bond. Elektra, meanwhile, mostly just sits around at her compound and pines for her (insane) lover. Yes, she gets to almost kill Bond once, but that's just almost, like she's any other nameless thug that nearly gets Bond but misses on the task. Beyond that, everything else about her -- her powerful company, her plans to put an oil pipeline across Europe and Asia, her desire for revenge -- are all just set dressing and have absolutely nothing to do with the real scheme: the stolen nuclear bomb and the plans to blow up a city with it because... chaos and carnage, I guess. Everything about King is incidental to that.

Blowing up a city is Zokas's goal because he's an insane mad man and wants to spread chaos far and wide. He's like the JokerOne of Batman's first villains, and certainly his more famous (and most popular), the Joker is the mirror of the Bat, all the insanity and darkness unleashed that the hero keeps bottled up and controlled. in that respect, an agent of chaos that just wants to see the world burn. And he'd be effective at that if the film was more focused on Zokas, giving him more screen time to really come together as a character. He's played deliciously by Carlyle, sure, but he has neither the presence in the story, nor the shown background to really sell his character to us. A little more carnage from the character, a little less plotting, would have gone a long way to sell him as a heavy in the story. Frankly we spend more time with Elektra and she's so shallow and uninteresting in the grand scheme of things that we don't care about either of them. The film lacks a villain, basically, and in the slot where one should go the film puts to half-baked ideas and calls it a day.

Still, both of those characters are better than Christmas Jones. Oh, gods, this character. When people talk about how bad the Brosnan era got, Dr. Jones is immediately shown as Exhibit A. Jones is a barely sketched character, a beautiful nuclear scientist inserted to that Bond can have a "good girl" beside him when he goes to battle the "bad girl" (and that's really all the reasoning the film needs). But Jones, like so many other Bond girls before her, isn't there for what she can do for the story, only to be a piece of eye candy and give us someone Bond can talk to so he can deliver his one-liners. When it comes to actually doing anything -- defusing a bomb, exposing the evil plot, taking out the bad guy -- Jones takes a back seat and lets Bond do all the work.

Honestly, even if Jones were better written and worked into the story in a way that didn't relegate her as an "also ran", there would still be the problem of Richards. Denise Richards got her fifteen seconds of fame off the back of her turn in Starship Troopers (a film that made good use of its flat actors and flat performances because it was trying to tell a propaganda piece) and then, for a brief, shining moment, she was Hollywood's "It Girl". Of course, as Hollywood soon learned, Richards has absolutely no range and is, in fact, a terrible actress. Throughout The World is Not Enough, Richards exhibits one emotion -- bemused disinterest -- and never shows any other signs of life. That's, frankly, the same acting style she's given in every one of her films and, in some case (like the souther-fried Noir Wild Things) it actually works well. Here, though, it's the wrong performance from the wrong actress for the film. It's just awful. 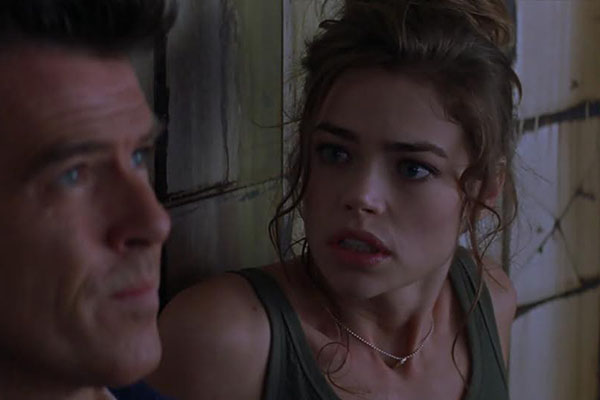 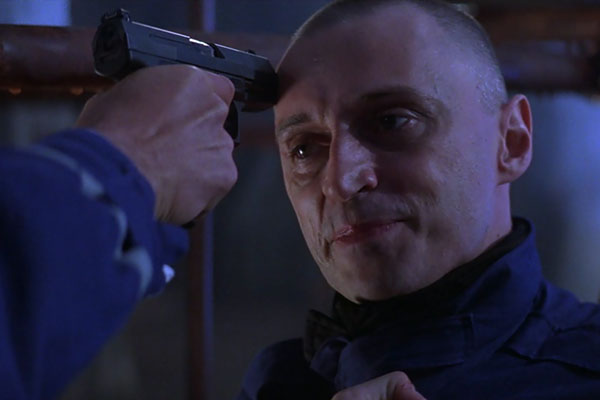 Not that I think anything could have saved this film. It's just another Bond film going over the same story beats that, at this point, we've seen for 19 films (and counting). Brosnan's Bond, in his "above it all, look at the shit I have to deal with" performance and his constant patter of one-liners, certainly doesn't help matters, but this film was hobbled from its inception and never finds any footing to actually become a halfway decent film. When people complain about the James Bond film, its tropes and plotting and everything that's wrong with the series, this is the exact kind of film they mean. This is James Bond in the worst possible way.