The Changing of the Guard

There is a fan theory that all of the James BondThe world's most famous secret agent, James Bond has starred not only in dozens of books but also one of the most famous, and certainly the longest running, film franchises of all time. movies are connected, not by a single continuity about one secret agent (who has been working since the 1960s and is not only unkillable but also largely ageless) but a series of secret agents who have all taken on the moniker of "James Bond, Agent of MI6, Codenumber 007". This theory really gained traction in the Daniel Craig era (which is a reboot, and we'll address those movies eventually), but, for my money, it really seems to start making sense here, in the first of two Timothy Dalton films. 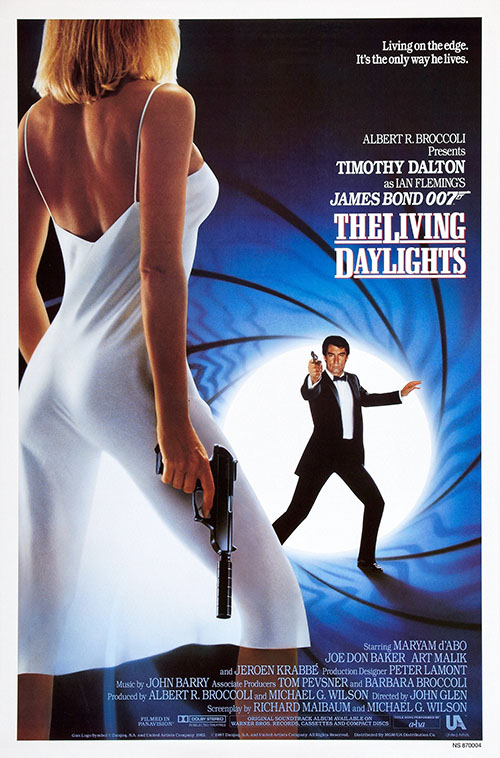 Actors, of course, age out of roles and when you have a series that, by this point, has been going on for 25 years, any actor would eventually have to abandon the role of the rich, young playboy/secret agent that was James Bond. Both Connery and Moore aged out of the role (and when Connery finally returned for the Thunderball remake Never Say Never Again they had to pitch him as an agent coming out of retirement for one last mission), while Lazenby bailed on the series after one film, required Connery to step in for another film after he left the first time.

Sometimes the series acknowledges these changes, like when Lazenby turned to the screen at one point and said, "this never happened to the other guy." More often, though, the movies just recast people in the same roles -- one M replaces another, just as the 007s swap out -- but never make a comment about it. And, for the most part, this makes sense in a logical way: everyone uses code-letters and codenumbers so why not just have someone else take over the rank and role of "M" or "Q" or "007"? And, from a practical standpoint, since Bond always goes around telling everyone his name, blatantly, maybe that really is a codename. Maybe when someone asks who he is, the disguise really is "James Bond" and not whatever role they're playing at the time.

I mention all this because The Living Daylights not only recasts Moore for the younger Dalton but also recasts the role of Miss Moneypenny, swapping out Lois Maxwell for the younger Caroline Bliss with nary a word about it. Is she Moneypenny's daughter taking over the position of M's secretary? Or is Moneypenny also a codename to protect the identity of this woman working for MI6? It's the only thing that makes sense, really when other characters such as M (Robert Brown), Q (Desmond Llewellyn) and, Russian General Gogol (Walter Gotell) reprising their roles and now playing characters much older than the current Bond.

This fan theory does help to add a bit of depth to The Living Daylights. The movie is a fun little romp on its own but it's even more interesting when you view it as the first big case for the new Bond, it first adventure our with the title and codenumber, feeling out what it means to fill the shoes of the men that had occupied the role before. Hell, the film even opens with a training exercise as if to say, "here's the new Bond, taking the title out for a spin." 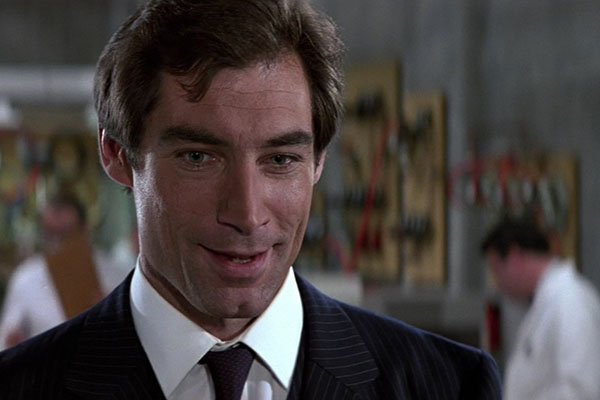 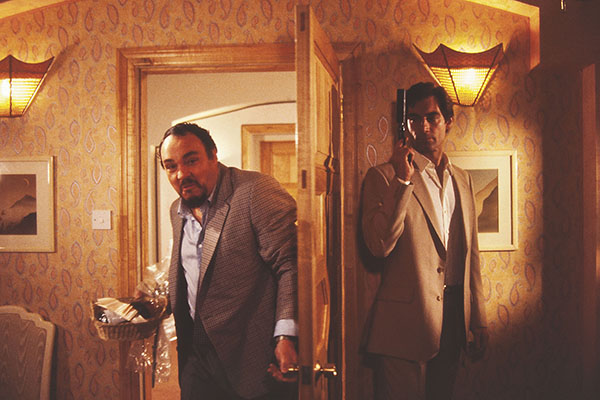 Once we get past the intro, the film settles into familiar patterns of previous Bond films. This isn't a movie trying to reinvent the franchise for a new era, instead working to slot the new Bond into a familiar film so that audiences (the now aging collection of dads that grew up with the film series) gets the comfort food they need. The Bond is younger, less reliant on gadgets and gizmos, and the silly humor that marked the Roger Moore era is less overt. At the same time, though, you could easily slot in Connery or Moore or even Lazenby as Bond and this film would feel of-a-piece with their previous adventures. That's the Bond style and substance and what so many people paid good money to see.

And, for this adventure, it does work. The Bond films benefited from the changing of the guard since, even while they trotted out the same old tropes -- crosses and double-crosses, dastardly schemes on top of further schemes, all set against a Cold War backdrop and actors pulling big "stunts" in front of a projection screen -- a new actor in the lead role helped everything to feel fresh. And Dalton, a solid actor with charisma dripping out of every pore, certainly worked to make James Bond into his own role. Gone are the dad-jokes and slightly above it all performance of Roger Moore's tenure, with Bond hardly even making those knowing one-liners. Dalton's Bond is more focuses, more intent in his job as a secret agent with a license to kill, like the movie is commenting on its own past history (again, pointing to that fan theory).

Dalton is certainly the best part of this movie (which is a nice change of pace from the Moore era). Unfortunately the actual plot of the film is B-level Bond material. We have a Russian defector who seemingly is going to help MI6 but, in reality is just using the British to plot a big score of jewels and weapons so he can make a ton of money and retire in style. This somehow requires that he double-cross everyone, set up a whole scheme to assassinate a bunch of MI6 field agents, and then go back to Russia for... reasons. Honestly none of his scheme really makes sense if you try and parse out all the details. Which, frankly, is exactly how most schemes in this series work.

Bear in mind this is a high level officer in the Soviet Army, one who is basically allowed to travel where he likes and commandeer whatever materials he needs. He could easily setup this whole scheme and pull it all off without involving MI6 or the rest of the Soviet intelligence service. It would be a low-key op, and in the end no one would be any wiser as he sails of into the sunset to live on beaches and drink mai-tais. But then that's the kind of embezzling scheme that doesn't rate high enough for Bond to get involved. It's practical and functional, neither of which is useful in a Bond story. 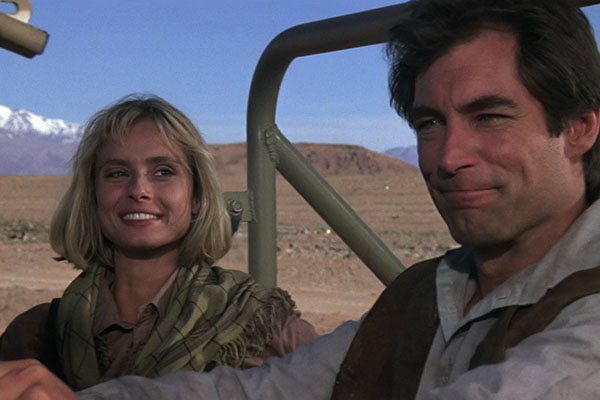 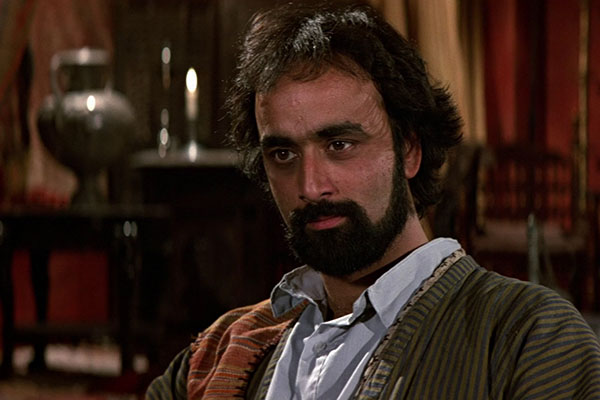 But the villain isn't really important in The Living Daylights, not in the same way they are in other films in the series. This movie isn't trying to be another Goldfinger or A View to a Kill (the latter of which, at the time, was considered a disappointment). Instead this is the Jame Bond show, starring Timothy Dalton, and the film is very focused on his adventure, his story, his growth. The villains a secondary, and while we do get some scenes with them, it's all stage dressing for Bond and his storyline. A good villain might have made this film more interesting, sure, but the movie at least wisely invests in the part that matters: Dalton.

The film works because it knows that the lead actor is the best part of the whole story, but also because it toys with the idea that we're watching a soft-reboot. We get to watch Dalton feel out the role, make it his own, and grow into being "James Bond". As almost an origin story for this agent taking on the role, The Living Daylights works. It might not be the best Bond film ever but it's certain a good shoulder above anything from the Moore era. And now I'm curious to see just what else the series is going to reinvent between the next Dalton film and the adventures of Brosnan after him.