A Snooze By the Sea

Let's all admit this up front: Goldfinger is an iconic movie. A classic Jame Bond adventure with a number of memorable characters -- Oddjob, Pussy Galore -- that also helped to cement so many of the tropes of the series. And, on top of that, it's just a solid adventure told very well (a few flaws notwithstanding). It was, in short, a hard act to follow so the fourth movie in the EON series, Thunderball, really had its work cut out to try and top that movie and keep improving the series. 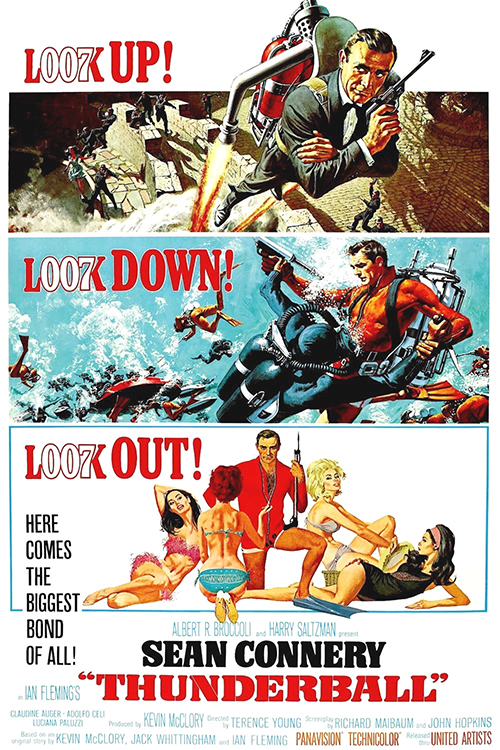 And, frankly, it failed. Credit is due to the production as they really did try to up the stakes, adding in more elaborate stunts, big action set-pieces, all while giving us a different enough plot to not feel like just another Goldfinger. And effort was made, but the creators of this film just didn't seem to understand how to recapture the magic of the previous film, to make something new and interesting, to take the lessons of Goldfinger to make the best Bond adventure they could. While it's not the worst film in the series I've seen yet, it does end up as another ho-hum, predictable tale for the series.

The movie doesn't get off on the right foot, honestly, with an opening that barely ties into the events of the main story. Bond (Sean Connery), on a mission in France, is tracking the widow of an agent Bond had supposedly just killed. Except, when he finally confronts the window it's revealed they're actually the male SPECTRE agent (in drag) pretending to be their own wife. There's a big fight, Bond kills the agent, and then flees on a convenient jet pack (you know, as you do). SPECTRE, though, is none too pleased by this turn of events and hatches a new scheme that just might take out Bond whole also netting the evil organization a boodle of money.

Despite Bond's interference, SPECTRE is able to get their hands on a nuclear warhead. With this warhead they hold Britain and the United States hostage -- unless these two NATO nations pay up, the warhead will be exploded in a random city somewhere in their countries. The two ally nations have two days to decide if they're paying, but Bond (suspecting the SPECTRE agents in charge of this scheme might be in Jamaica) jets off to stop the problem and secure the warhead. This leads him on another adventure in a tropical nation, enjoying the sights, sampling the female charms, and eluding SPECTRE's best, all while once again saving the world.

There are a few flaws with this movie, but the biggest issue (by far) is the lack of a solid villain. As you will recall, I was complimentary when talking about Goldfinger because, from the outset, the film gets us invested in the cat-and-mouse game between Bond and Auric Goldfinger. Their back and forth, their sniping at each other (literally and figuratively) drove the film and kept the tension up the whole time. Thunderball, by comparison, lacks a solid villain for us to invest in. Emilio Largo (Adolfo Celi) could be considered the central villain -- certainly he's the one that starts the whole warhead scheme -- but he farms most of his work out to other agents -- Fiona Volpe (Luciana Paluzzi), Vargas (Philip Locke) -- while Largo lurks in the background, doing very little of consequence. 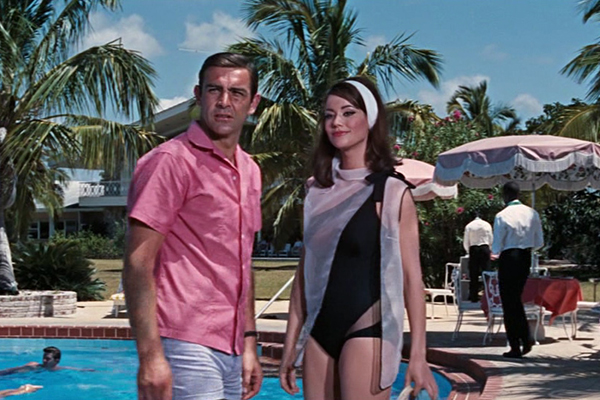 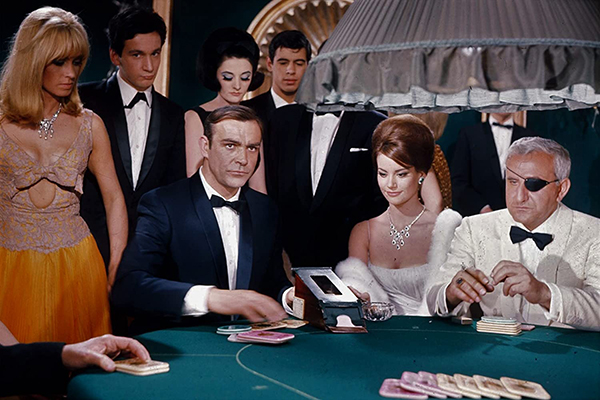 It's pretty clear that the production team feels like SPECTRE is a big enough villain to carry the film, that just the looming threat of this evil organization fills the void of any one villain to the point that Bond is, clearly, fighting all the evil spies in the world. The issue with that is that, even now, SPECTRE still hasn't been very well developed. That's likely due to the fact that the earliest Bond films had trouble getting off the ground -- despite being the fourth movie produced, the original script for Thunderball predates even the James Bond novels, and SPECTRE was a threat first developed in that original screenplay. Of course, the previous films (Dr. No and From Russia with Love) had already used SPECTRE so the villainous organization had to be reworked here.

That doesn't change the fact, though, that the SPECTRE we've been presented is unformed and nebulous. They're shadowy enough that the governments of the world can't just track them down and assassinate the whole lot of them, ending the organization once and for all, but also powerful enough that they can influence major events. SPECTRE is essentially whatever the script needs it to be which might work moment to moment to explain plot points but it doesn't really develop them. Basically, we understand SPECTRE as well, four movies in, as we did at the start of this series. I just can't invest in it at all.

Not that Thunderball makes it easy to invest in anything. It's a shaggy-dog story, with various events stitched together loosely while Bond basically just goes on vacation in Jamaica. It's a lovely travelogue of the island, with plenty of glorious shots of the water, the beaches, and the jungle, but Thunderball lacks any tension, anything that can make us actually care about what's going on.

Think about it this way: a bomb is going to go off in a city, somewhere. That's a great concept, but the mystery of where the bomb could be also undermines the tension. Bond wanders the globe, never setting down roots, so the closest place he has to a home are the offices in London. If the bomb ended up there it was give Bond a personal stake in the proceedings, but instead the bomb goes to Miami, a city Bond hasn't shown the least consideration towards. A good setting can act like it's own character, and if the bomb were to end up in a place that had been developed, that Bond cared about (again, like London), that could have upped the stakes. But, as with everything else, Thunderball doesn't seem to understand using the story to raise tension. 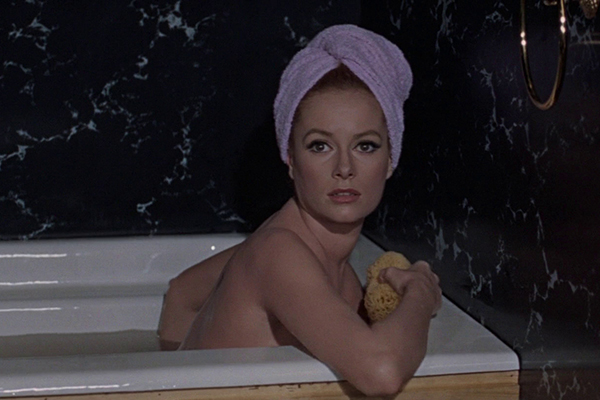 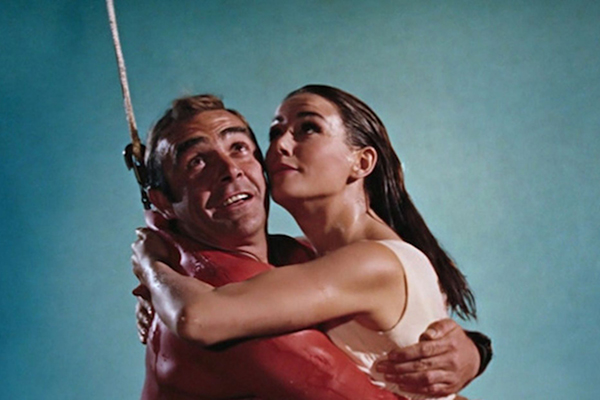 Maybe I could have forgiven this if the action were at least good, but a vast majority of the action sequences are spent underwater. Water action is different from action sequences filmed on land, so you need a solid team of stunt performers and coordinators that understand what's going on to be able to produce solid underwater action. The team involved here in the filming and editing of the sequences, though, just didn't have a clue what made for compelling underwater action. It's all a slog to watch, slow and meandering, without a lot of really good, visceral moments to carry the carnage. It's lifeless, airy, and boring, not what you want out of an action film.

The core idea of Thunderball is interesting -- Bond taking on a new villain and stopping a nuclear bomb from going off in a major city (not for nothing that two different Mission: ImpossibleIntroduced in 1966, the original Mission: Impossible featured a team of agents (with varying skills) heading out into the field to solve puzzle-box like cases on a weekly basis. This simple concept spawned a long-running series, a second series in the 1980s, and a hugely successful movie franchise starring Tom Cruise that continues today. films have used this exact plot device to drive their stories) -- but the execution of this fourth Bond adventure is lacking. It's too flabby, too slow, to amused with its own tropes to be a solid, quick-paced action adventure. Goldfinger was an iconic thrill ride, but Thunderball is just a sad, slow water feature no one cares about.