If you grew up in the 1990s you remember Wayne's World. Based on the sketches by Mike Myers and Dana Carvey from Saturday Night Live (during one of those times where the entire cast of the show was brilliant and the show didn't suck), this film felt like exactly what the generation needed, a tribute to what life was like during that decade. Wayne (Myers) and Garth (Carvey) were cool. Slackers, sure, but cool and (as they parody with their scene lifted from Laverne and Shirley), they do it their way. 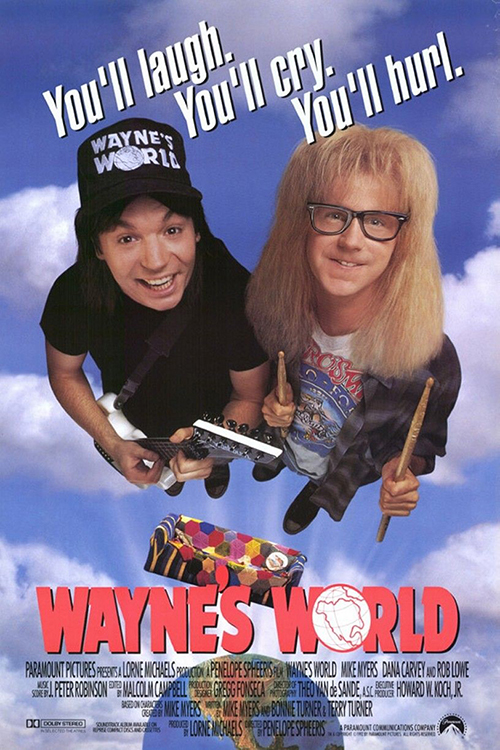 But this film is going on 30 years old at this point (a fact that should make many of the children of the 1990s feel very old) so I had to wonder if this film held up. Was it as funny as I remembered it, or had something come along to make it suddenly feel tired or, even worse, out of touch? I hadn't seen the film in probably a decade so I wasn't sure how well it would hold up. Thankfully, for the most part, the film still does work. Maybe it isn't as funny as it used to be (or perhaps I'd just watched it so many times in the past that most of the jokes were expected now) but it's still a fun lark of a film that doesn't take itself all that seriously.

In the film we're introduced first to Benjamin Kane (Rob Lowe), a sleazy producer who, during a night hanging out with the girl he's sleeping with at the time (she never shows up again so I hesitate to call her his girlfriend), spots an episode of the community access show Wayne's World (making it a show within a movie that both share the same name, so just go with it). He decides then and there that he'll get the rights to the show and sell it to his biggest client, Noah Vanderhoff (Brian Doyle-Murray), owner of the chain "Noah's Arcades".

After this introduction to the plot we're then dumped into the basement of Wayne Campbell as he and his co-host, Garth Algar, put on their show, Wayne's World. It's a dopey show that really is little more than them hanging out in the basement, talking to the camera and doing interviews and other skits. After watching a bit of an episode we then follow along as Wayne and Garth hang out around their town, Aurora, IL (a suburb of Chicago). Wayne goes to a rock concert, meets Cassandra Wong (Tia Carrere), lead singer and guitarist for Crucial Taunt, and instantly falls in love. He and Garth get courted by Benjamin and sign a contract to do Wayne's World for money. But all the while things start turning against Wayne. Has he sold his soul to be able to do his show professionally? If it's a professional show is it still the same show anymore?

It's interesting to go back to this movie after all this time and see the parts that work as well as the things that don't. The most obvious thing that doesn't work anymore: it's doubtful that anyone, now, would become famous off of a cable access TV show. We live in an age where everyone is unplugging from network TV packages and going Online for all their TV consumption and a show like this, no matter how weird and scrappy, wouldn't make someone even "locally famous", let along get just enough of a draw to interest a producer like Benjamin. 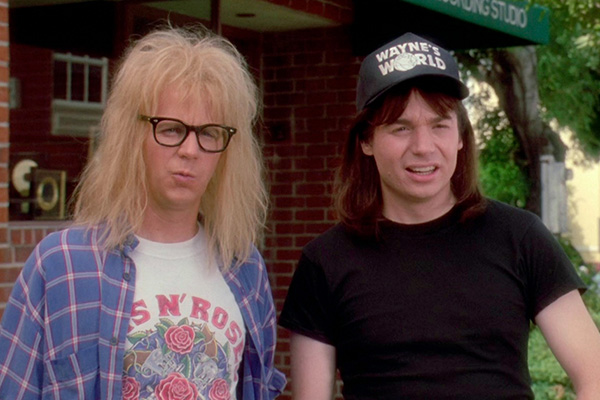 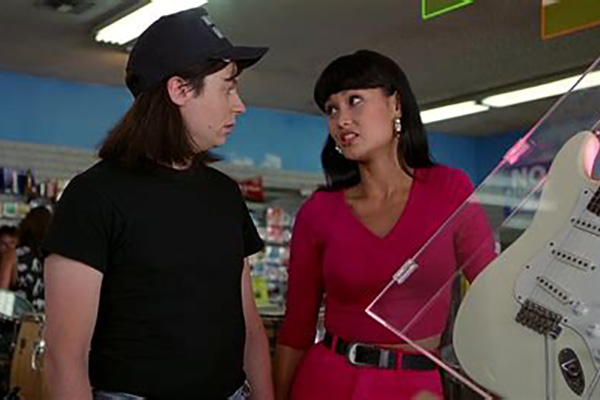 That said, there's a lot about this movie that feels spot on, and if we can address the show-within-the-show for a second, I could see a version of Wayne's World working today. All it would take is for the show to move over to, say, YouTube or TikTok. There, the short skits and little interviews Wayne and Garth perform would work as the perfect video bits for people to download and enjoy on their phones or while scrolling through social media. While a public access show would never succeed now, the idea behind the show seems like it would work even better today.

Hell, carrying that further, if Wayne and Garth could become Internet famous it's doubtful that someone like Benjamin would even be able to lure them into selling their show for a measly $5k a pop (as he does here). Someone with that kind of following would probably be an Internet influencer so Wayne's whole dream (and the plot of this film) of being able to do Wayne's World as his career likely would resolve itself the second his first video went viral. We live in a very different age from the 1990s.

That said, so much of this film manages to nail the Gen Y/Gen Z angst of being stuck in jobs you hate, still living with your parents while you wait for something to come along that will pay you to do what you love (or, really, at all). All the things Wayne and his friends do -- driving around, going to cheap shows, scraping by from paycheck to paycheck -- hasn't really changed in any way. If anything their desperation feels even more real, more tragic than it did back then, and these two 1990s grunge slackers are the perfect icons for where our current generations are at right now.

One other thing I really want to credit the movie for is treating the female lead, Cassandra, like a real person and not just a prize to be won. Sure, when she's first introduced Wayne does say, "she will be mine," just like he did for a Fender guitar he saw a couple of scenes back (and that felt a little icky). But then Wayne goes out of his way to prove himself to Cassandra, learning to speak her native language (Cantonese), having real, honest conversations with her, and doing what he can to support her career. All too often its the woman he has to just stand around while the guy finds himself but here Wayne knows he has to work up to be at her level and he puts in the leg work. I can respect that and it's refreshing for a film like this. Plus, Cassandra is of Asian descent and the film not only doesn't make a big deal of it, it kind of celebrates her for it. 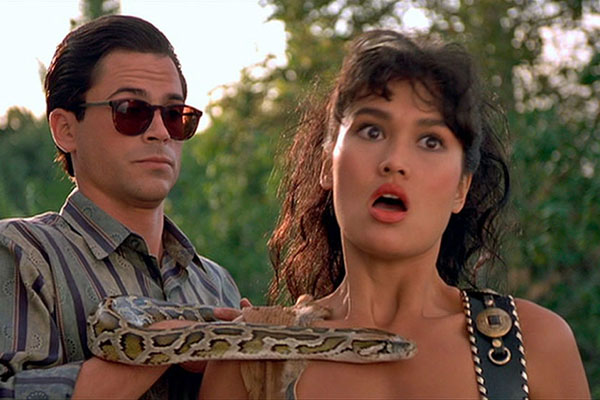 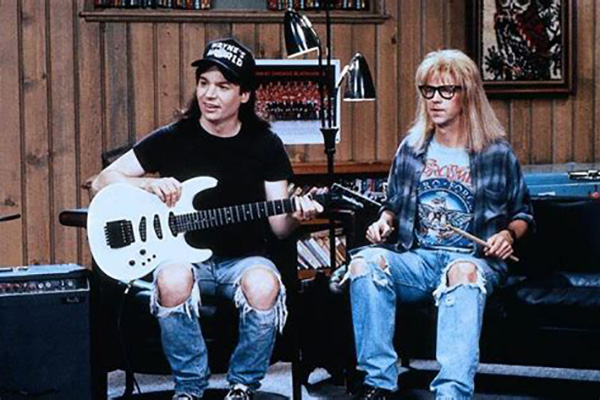 That said, I do wish the film was a little more cagey about Benjamin and his motives. The opening scene certainly casts him in a bad light, and then we have more scenes later on that illustrate how sketchy the dude is, lying to everyone to get his way and make a deal. These scenes stand in weird contrast to the rest of the film which, by and large, only follows Wayne and Garth, and it feels really weird to be let in on Benjamin's scenes. Even worse, because we know how sketchy the guy is we never once think of anything going on with Wayne and Garth (and their show) as a good thing. If the film could lure us in for a little while, make us think, "hey, maybe this really is good for the show," only to have the sleazy commercialism of it sink in over time, I think the plot would work a bit better.

The film, though, does have a lot of fun playing with the idea that being a sellout and giving in to commercial greed is a bad thing. Hell, there's an entire montage lambasting the entire idea of corporate sponsorship by absolutely roasting the film with corporate sponsorship (the only film that does this even better is Josie and the Pussycats). Sure, it's a little weird for a blatantly corporate product (like a Hollywood film) to be throwing shade at blatant corporate greed, but it works within the context of the film at least. And then you cheer when Wayne and Garth stick it to the "man".

So, on the whole I do think this film holds up. It's still fun and funny (and the "Bohemian Rhapsody" sequence still kicks ass, of course) and while it might not have aged as well with technology as we could have hoped, in other ways it feels all to prescient. Wayne and Garth, in a way, are eternal and their misadventures as still a lot of fun to watch. That's good to see for a film approaching its own middle age.