And Then Ten Years Later...

As I've noted before, no one should have expected Veronica MarsWhen it first debuted on UPN, it's doubtful any suspected that this plucky "girl detective" television series would go on to spawn a movie, novels, and a revival series, keeping it fresh in the minds of fans 15 years (and more) later. to continue once it was canceled after its third season. While the show was good, and certainly deserving of a life beyond its three seasons, canceled shows don't tend to find second life (especially if they aren't immediately picked up by a streaming network). The fan-base for Veronica Mars, though, has always been rabid so, if ever a chance to bring back the show were available, series creator Rob Thomas swore he'd make it happen. 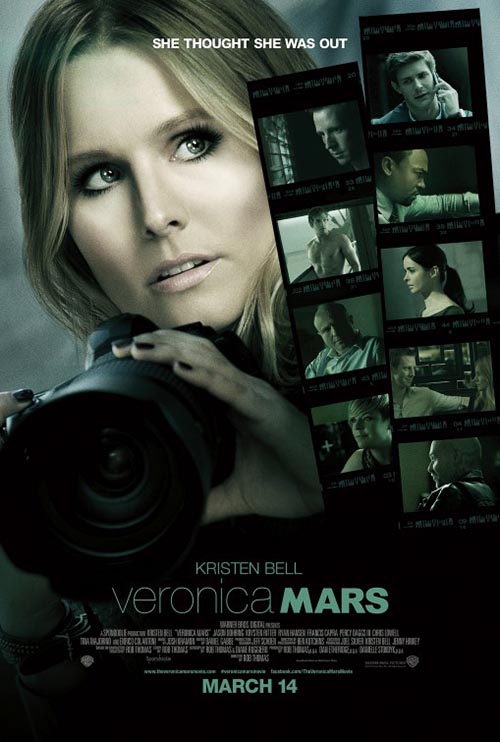 Although slightly off topic, but it's worth noting that another or Thomas's shows, Party Down, has a similar cult following. That's a show canceled far before its time after two hilarious, short seasons. Years later there is still talk about bringing that show back as well. Clearly, Thomas had great ideas that really inspire fandom (even if the larger TV audience doesn't always get on board).

The Internet, though, has created multiple avenues for productions to find new life. In the early days of Kickstarter, back when multiple articles were regularly written about some new massive funding event that had just happened, Thomas decided to take his pitch for a Veronica Mars movie Online. After conversations with studio Warner Bros. (who still owned the rights to the original show), Thomas had a starting goal of $2 Mil to get a movie off the ground (a number, presumably, that would show enough fan interest in the production) and the pledge drive was off. By the end of the 30 days the project had a budget of $5.7 Mil (all thanks to fans), and Warner Bros. gave their blessing. A Veronica Mars movie was happening.

So, is the end result worth it? Well... maybe. I guess it depends on what kind of fan you are. As an indie film released by a big studio, the movie had to make certain concession to be as friendly as possible to a wide audience. Remember, this was a show that aired on UPN and then the CW, and its ratings weren't good enough to remain on the air at the CW. The fan-base for the show, while, rabid, wasn't huge. Anything being released in theaters had to spend time recapping a lot of information from the series that people new to the series might not have known. That's why we get an extended "previously on"-style montage at the beginning of the movie, and characters will regularly exposition dump to make sure everyone knows all the intricate back-story of the characters. These parts of the movie are its least graceful and certainly hold the film back some.

And, really, I have to wonder why those sections of the movie are even in there. While I get that the studio really wanted to bring in new people to see this movie (so they could rake in as much cash as possible), how many people outside of the rabid fans really cared? I know I wanted to see the film and I didn't even bother catching it in theaters. If someone like me that's seen the whole series doesn't bother seeing it in theaters, how many other casual fans would bother? And all the new people, are they even going to be interested in a Veronica Mars film? Seeing as it only brought in $3 Mil during its theatrical run (presumably because most of the rabid fans were getting free tickets or copies of the movie from the Kickstarter run and didn't need to pay to see it twice), it was obvious wishful thinking on Warner's part that anyone outside the fans would bother with the film. 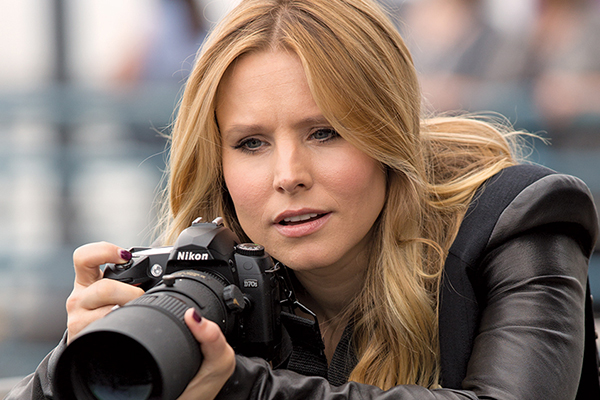 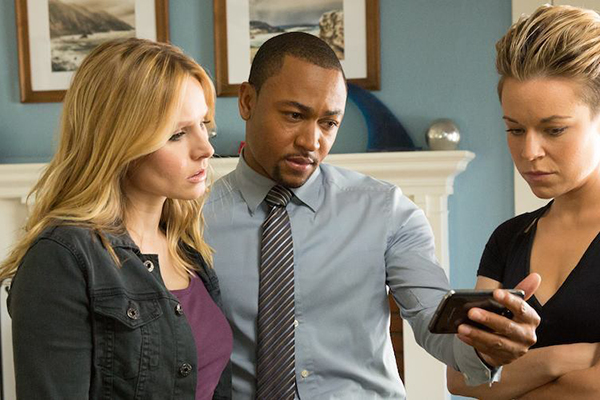 If you can get past the awkward "explain the series to everyone" moments in the film (which, thankfully, eventually subside part way in), the movie is a decent little mystery film. After leaving Hearst college after a single year, moving over to Stanford (thank you for answering that, movie) to finish her degree, Veronica moved to New York to pursue a career as a lawyer. On the cusp of taking the bar exam (and getting a great job at a high-priced firm), Veronica gets a call from Logan -- he's been accused of murdering his girlfriend, a pop star, and Need veronica's help in finding the right lawyer for the case. So Veronica drops everything, even putting her relationship with Piz on hold (yes, Piz is still around, somehow) so she can fly out to Neptune to help her old friend. Then she gets sucked into the murder case, working her magic to solve the murder and clear Logan's name, clearly illustrating that no matter how hard she tries, she can't escape her P.I. life.

It's a pretty standard case for Ronnie, and thankfully the movie handles it all pretty well. Because it's a film, with an hour-and-a-half (give or take) runtime, the case couldn't be that deep -- there isn't time to do thee long, season-style plotting of the show, and there certainly isn't much in the way of side cases or other plots for Veronica to get involved in. Essentially, if you really wanted Veronica balancing three cases while she worked to crack Logan's story in the process, like she used to do on the show, this wasn't going to be a story for you. Films are different from shows, and this movie pushes up against that boundary pretty hard to feel like the show yet still be a fast and lithe film.

What this means is that, even more than in the show, the movie is all about Veronica and her current case. While her friends, Wallace and Mac, show up, their time in the movie is quite limited. Same goes for Logan's idiot friend, Dick, and many of the old classmates that show up as well. While it's nice to see all the old faces, they don't get to be much more than glorified cameos (at least, not until the murder plot starts to come together and certain characters are focused on as Veronica tracks down the killer). In some cases the returning characters become superfluous (like a returning Weevil who gets all of three scenes to convey a half-baked story of redemption and then his fall back into the old life). It's nice to see people we know, but maybe if they couldn't be served by the film should have been left as cameos (or on the cutting room floor).

Sadly, even Veronica's dad doesn't get nearly as much focus as he deserves. As I've noted in the previous reviews of the show, the bond between Veronica and her dad, Keith, was the glue that held the show together. While the actors still had their chemistry, Keith is barely in the film at all. He doesn't get to hold his own weight, largely relegated to a side-plot about police corruption that, also, doesn't go anywhere. His story couldn't take priority over putting Veronica and Logan back together for a case (and then, maybe a little something more for that unnecessary love triangle with boring old Piz). It leaves the movie feeling like its missing a vital chunk, a key part of the dynamic that really made the show work. 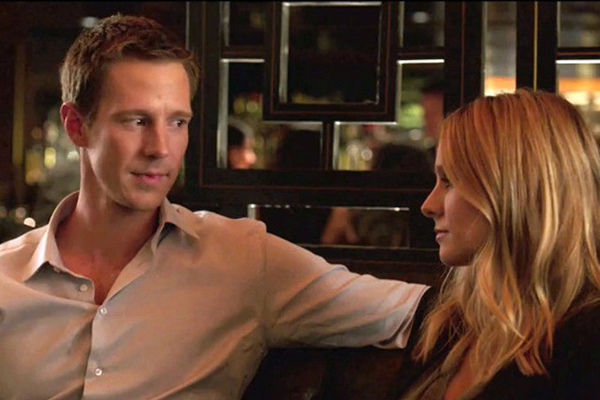 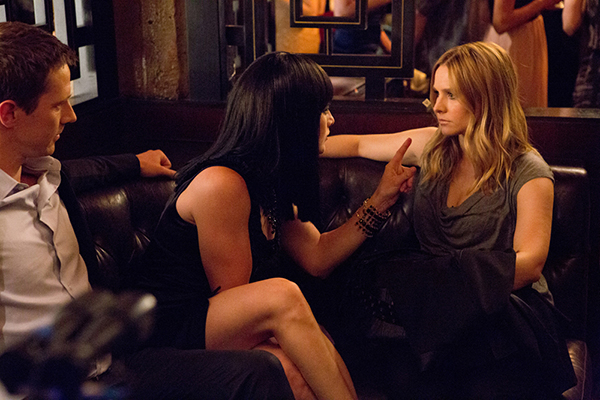 Thus, instead, we have Veronica and Logan to focus on. Kristen Bell is, of course, fabulous in the role. Even after all these years the actress still had the character nailed down, her demeanor and patter still spot on. Dohring's Logan, though, wasn't as strong in the film. The movie went outs of its way to try and redeem the character before he even appeared in the film, having him join the military, reforming his life to be a cleaner, better person. What it also made him, though, was super boring. Logan lacked the fire and vitality that made him such an interesting character. Cleaning up the bad boy just made him into a normal guy, and normal isn't interesting enough for Veronica. Normal is Piz, and we already had a Piz (and he's also not that interesting).

The case itself was pretty good with a few fake outs and red herrings before everything was revealed. The film does at least provide most of the clues needed for people to more or less figure out the mystery for themselves, which is a bonus, and nothing feels like a cheat. Really, the worst part of the mystery is the fact that the film doesn't have an overabundance of characters to work with so it's pretty easy to guess which character is going to be the bad guy (especially once you eliminated all the returning characters, like Keith, Piz, Wallace, and Mac) who clearly couldn't ever be a bad guy. It's not the strongest plot overall, but it does work well enough to carry the film.

Which takes us back to the original question, really: who is this film for? If you're a fan of the show then, yes, you're going to see the movie. Whether or not you enjoy it really then depends on what you want from the movie. If all you care about is spending a couple of extra hours with Veronica, especially when at the time if seemed like this film might just have been the last word on the character, then you'll probably enjoy it. If you were looking for anything as well executed and tightly plotted as the best episodes of the original series, though, this movie probably wouldn't thrill you. I know the first time I watched the movie I was left a little cold by it, and only on second viewing (knowing what to expect) did I really enjoy it at all.

But then there's also the fact that this movie already feels irrelevant. Hulu picked the show up for a fourth season of eight episodes (and, if that does well enough by streaming standards, and it likely will with how much Hulu has been promoting it) then Veronica Mars will be around for some time. The film isn't the last word on the character and, in fact, may not even be essential to the enjoyment of future seasons. It's an interesting side-story, a footnote at best to the continuing chronicle of the character, and more than likely anything important from the movie will be recapped in the next season and everything else will just be shoved under a rug. That leaves the film as essential viewing only for super-fans and no one else and, really, I don't know how much fans would like this film. It's a fine mystery but not a great return for Veronica Mars.