When catching up on the Veronica MarsWhen it first debuted on UPN, it's doubtful any suspected that this plucky "girl detective" television series would go on to spawn a movie, novels, and a revival series, keeping it fresh in the minds of fans 15 years (and more) later. series, I knew there was one other project I would eventually have to delve into for a full grasp of the whole franchise: the novels. If you're just a casual fan of the series you probably didn't know there were novels based on the character, set in the familiar city of Neptune, CA (heck, I only found out about them from Wikipedia). The trick is that the novels fit naturally into the flow of the series -- from the movie and leading into the fourth season -- -so there's important story to get that helps to flesh out the world. 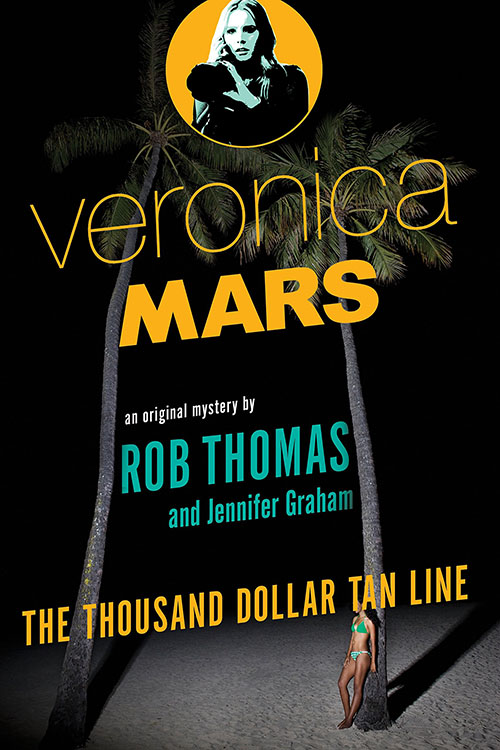 This isn't like the Star TrekOriginally conceived as "Wagon Train in Space", Star Trek was released during the height of the Hollywood Western film and TV boom. While the concept CBS originally asked for had a western vibe, it was the smart, intellectual stories set in a future utopia of science and exploration that proved vital to the series' long impact on popular culture. novels where anything depicted in the books is glorified fan fiction (if it doesn't happen in the shows or movies, it's not canon), but instead really does help to fill out the world and is, in fact, influential on the later season(s) of the show to come. Series creator Rob Thomas explicitly stated back when the first of the two novels (released so far) came out that any future production (he implied a movie but then a television series happened instead) would ensure the books remained in the continuity of the series. It's noble idea and, honestly, it's the only reason I even bothered with the books to begin with. While I like the character of Veronica Mars and everyone around her, I've always been irritated by literary continuations of shows that are then ignored when later works come out. If this book could have had that same fate, it wouldn't have popped up on my RADAR.

The first and most important development in this book is also going to feel like the least consequential: Spring Break. The fourth season of the show is set during this annual bacchanalia, making Spring Break itself a major plot point of the season as a bomber strikes key Neptune businesses right during their busiest season, all but eliminating all the money they need to survive the rest of the year. The fact that Spring Break is so important to Neptune probably came as a bit of a shock to fans of the show, though, since it was never once mentioned in the first three seasons at all. Sure, people hung out on the beach but we never saw giant, Spring Break ragers during the show. Heck, the show barely made any mention of the Neptune Boardwalk, which was the focus on the fourth season, so what happened? Did they suddenly just build a boardwalk and then make it a major tourist destination in seven years?

The Thousand Dollar Tan Line does help this development some. While the novel still acts like Spring Break was always an event in Neptune (this despite us never seeing it), the book is also set during the event making it feel more natural when the fourth season revisits the time period. Plus, the novel mentions students coming in from surrounding colleges, like Stanford and Hearst (two places Veronica attended), allowing us to get a sense of how Neptune's Spring Break celebration fits into the large dynamic of the show. At least this way it seems like the event matters and isn't simply stuck in as a sudden retcon for no good reason.

The novel also helps to continue the storyline of Keith's recovery after the car accident he suffered in the film. Here his convalescence has only just begun, with him still going to therapy two months after the incident. Considering that the fourth season picks up five years after the movie, once all the dust has settled and Keith and Ronnie are going on about their business like the last five years barely happened, this follow-up on the events of the movie is greatly appreciated. The novel helps us keep up with the characters, see Keith go through his development so that, by the time we catch up with him in the fourth season, we understand and relate as he continues to undergo long-term healing.

Those developments are appreciated and help slot the books nicely into the whole series. Some other development aren't nearly as interesting, though. The novel's focus is on the disappearance of two girls, one a college student and the other a visit high schooler, after they both vanish from parties at the same house. Veronica smells a connection between the two cases, but as stories come out and more evidence presents itself, Veronica steadily begins to crack the cases (even as it seems more and more likely that the two disappearances may, in fact, be unrelated events). In the process of following the second of the two cases, Veronica ends up coming face to face with her mother (last seen in the first season of the show). This is a major development, especially once it's revealed that her mother married a new guy and had a child with him (making that her new half brother), but honestly I doubt the show is going to do anything with this.

Here's the thing: a major character arriving, having a giant story, and then leaving in the span of a single book is the kind of thing fans will remember. It will color any future appearance of the character going forward and, if for some reason the show has to spend time going over the details of it all again, it makes this whole section of the book redundant. The show can't just treat it like canon without explanation -- there's no "previously on" that the show can cut to since it's all text on a page -- but if they explain it then it undercuts the book in the process. On the flip side, though, if the show ignores this development entirely and never brings back Ronnie's mom then the plot development is just so much fan fiction, official as it may be. It's a big event but one the show can't really use in any way, shape, or form moving forward.

Then there's the problem with the case itself. Like the show, the book leans heavily on misdirection and red herrings. A big part of my issue with the mysteries in the first and second seasons of the show was that the show spent a lot of time wandering all over the place trying to solve the mysteries when a lot of the meat of the cases was saved until the last second. The book shares that problem, spending a lot of time showing us all kinds of possible solutions to the conjoined cases when, in actuality, one suspect was known from the very beginning (and wrongly dismissed, a fact that we couldn't have known because the book cheats and fails to give us any context we could use to solve it ourselves) while the other doesn't really belong in the same case file (for reasons that become apparently by the end of the book). It's really, then, all a fake out, a bit cheat that undercuts the mystery of the novel (again, just like the show).

This might not have been such a big deal if there were any major B-plots to follow. Despite the fact that major characters from the show appear in the novel -- Mac and Wallace and Weevil -- none of them are given anything to do outside of Veronica's case. If we could have seen her, or her dad, assist someone with their own problems, or if her friends could have at least been more than props to assist Veronica with her own case (and then disappearing when not useful) that would have helped to make the whole of the story more satisfying. A certainly amount of meat is missing from the book it make it feel as full and real as the best episodes of the show (a problem, honestly, this book shares with the novel).

It's sad, really, because the novel does get Veronica's voice right. She comes across just like she did in the show, hard boiled and snappy with just enough vulnerability to make her an interesting character. The time she spends with her father or with Mac at the office is solid stuff, entertaining and interesting. It's just that the book, on the whole, is missing a spark, something to make it feel like anything other than the "Veronica follows dead ends" story.

Still, it was fun to have the character around for a few hundred pages, and the book was a light enough read that, even though I am tearing into the story, I enjoyed what I was given well enough. I don't know if I'd reread this novel (a high benchmark for books I enjoy) but I don't hate the time I spent with it the first read through.

I prefer the feel of books and have never been interested in audio books. I picked up the standard paperback of The Thousand Dollar Tan Line because I prefer physical novels. That said, if you do enjoy audio books, original actress Kristen Bell reads the novel for the audio edition. That's a nice touch and, once again, helps this novel feel of-a-piece with the rest of the series.