No Safety, No Freedom

I feel like I have to go into this review noting that I haven't played the Injustice games. I'm not big on fighting games, with the one series I could get into being the Smash Bros. titles. That game had easy combos and was just a lot of silly chaos, but the thought of having to memorize dozens, hundreds of combos even just so I can see the plot of a story just doesn't appeal to me. I don't begrudge people that enjoy fighting games, they've just never been my cup of tea. 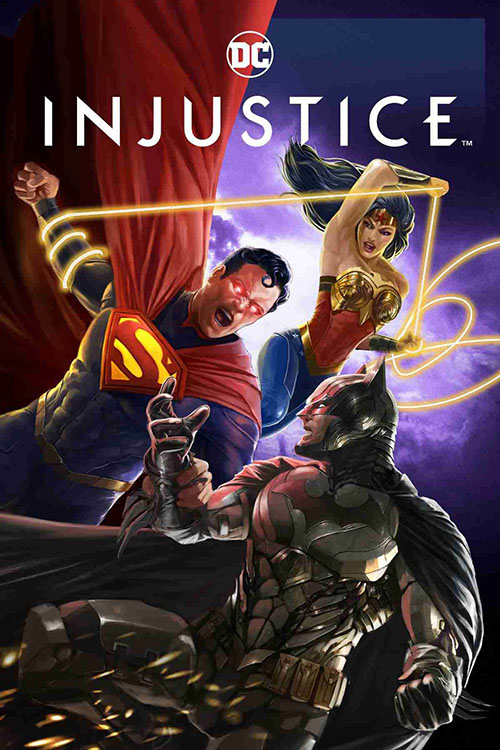 That said, there isn't a single idea is sacred for DC ComicsOne of the two biggest comic publishing companies in the world (and, depending on what big events are going on, the number one company), DC Comics is the home of Superman, Batman, Wonder Woman, and just about every big superhero introduced in the 1930s and 1940s.. Whether you consider the Injustices games -- both the original Injustices: Gods Among Us, or it's sequel Injustice 2 -- as "sacred", the games were well received. They had tie-in comics that fleshed out the world and story even more, and generally fans seem to have liked this little pocket of the DC Universe. That's not something DC can leave alone, so along comes a movie adapting the basic story of the games for those, like me, that don't feel like playing the games.

Honestly, from what I could dig up reading about the games and comics, this film is less an adaptation of the first game (let along even touching the second) than the comics around the games. That may be due to the divisions between the seconds, and maybe the film group couldn't use too much from the games themselves, having to stick to media that DC Comics published. Whatever the case, this is a film that probably won't appeal to fans of the actually games, since so little of that content is in here, but I don't know if it would actually appeal to normal superhero fans, either. This is a dark and depressing film that doesn't really know how to address the deep issues the characters feel, instead opting for a lot of blood and gore to paste over everything. It's interesting in the moment, but the relentless pace and dour mood make this story vastly less enjoyable to watch than it would be to play, I suspect.

The movie opens with SupermanThe first big superhero from DC Comics, Superman has survived any number of pretenders to the throne, besting not only other comic titans but even Wolrd War II to remain one of only three comics to continue publishing since the 1940s. (Justin Hartley) learning from his wife, Lois (Laura Bailey), that they're pregnant. He gets so excited about the prospects of a child, but duty calls and he gets sucked into "work", protecting Metropolis from its usual dangers. And it's unusual ones, too, as he quickly finds BatmanOne of the longest running, consistently in-print superheroes ever (matched only by Superman and Wonder Woman), Batman has been a force in entertainment for nearly as long as there's been an entertainment industry. It only makes sense, then that he is also the most regularly adapted, and consistently successful, superhero to grace the Silver Screen. (Anson Mount) on the hunt for JokerOne of Batman's first villains, and certainly his more famous (and most popular), the Joker is the mirror of the Bat, all the insanity and darkness unleashed that the hero keeps bottled up and controlled. (Kevin Pollak) who'd come to the mean streets of Metropolis for reason the Bat couldn't yet see. Soon we learn the Joker's plans, though, as the mad clown prince kidnaps Lois and puts her in a situation where, sadly, Superman accidentally kills her. And then Joker blows up all of Metropolis. In a single flash Superman lost the woman he loved, his unborn child, and his city. Understandably he then kills Joker, although this suddenly turns Superman into a man and not an ideal.

Having taken that step, Superman sees what has to be done. To protect the world he, along with some of his fellow Justice LeagueThe premiere team at DC Comics, their version of the Avengers (which actually came before the Avengers and, really, has existed in some fomr since the early 1940s), the Justice League is the team-up to end all team-ups, featuring some of the most popular, and longest running, characters in all of comics history (and also Booster Gold). members -- Wonder WomanLong considered the third pillar of the DC Comics "Trinity", Wonder Woman was one of the first female superheroes ever created. Running for as long as Batman or Superman (and without breaks despite a comic downturn in the 60s that killed superhero comics for about a decade), Wondie has the honor to be one of the longest serving, and most prolific, superheroes ever. (Janet Varney), Cyborg (Brandon Micheal Hall), Hawkman (who doesn't speak), become the world's policemen, outlawing all violence. Meanwhile Batman, already seeing where this was going, sets up an insurgency to fight against Superman. The goal was to get Big Blue to see what he was doing, to stop his madness (driven by grief and guilt) and come to his senses. But in the process a whole lot of people, civilians and superheroes, would end up dead. Justice doesn't come cheap. 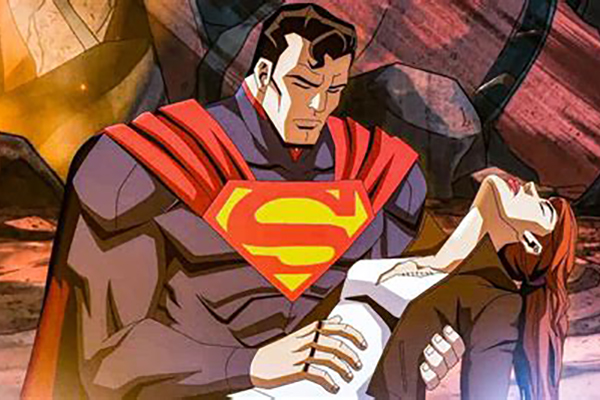 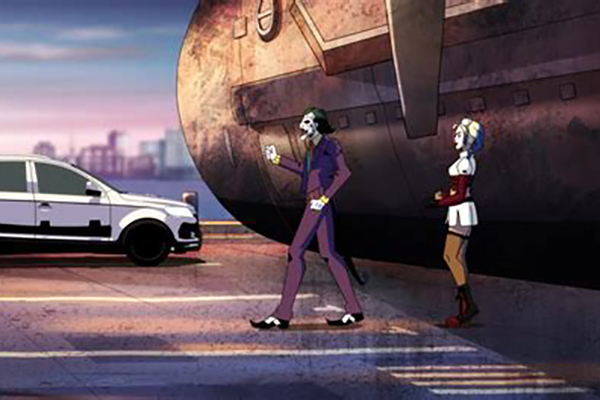 One of my big issues with Injustice -- and, really, this doesn't just apply to the movies but also the games and comics, but we're here to discuss this movie most specifically) -- is that it's yet another entry in the "what is Superman went bad?" canon. I get that he's the most powerful superhero on Earth but it's hard to care about yet another tale discussing Superman's downfall when this kind of story has been done to death lately. Apparently the cool thing to do is take the character that stands as an ideal and rip him down to show, what, the ruination of hope and inspiration?

There is some commentary on this fact. The Americans military in this film is fine when Superman goes around taking away everyone else's war toys, but once Supes turns his sights on American war tech, suddenly they're upset. The movie is a little ham-fisted about that, having the characters literally say that, but I get the idea of taking someone that's considered an "American" icon and poking holes in the idea of toppling dictators and policing the world. And yet, at the same time, the film doesn't really show the flaw in the idea of intervention. If anything, Superman here was actually pretty good at stopping war. It's only when he decided to go even further, killing people for little things like wearing joker shirts, or locking up any superhero that didn't agree with him, that suddenly he was shown to be truly evil. I'm not sure the film wanted to prove that having a single Superman hanging over our heads was a bad thing or not, but it didn't really manage it as well as it needed it.

Part of the problem is that they wanted Superman to remain redeemable. He couldn't be a true villain but, instead, had to be a grieving husband and father. Yes, this gave the character depth in so far as you could understand the why of what he was doing, but it also made his actions seem too shallow and yet incongruous at the same time. He wanted to put an iron fist around the world, yes, but when he actually went out of his way to do evil things it felt like someone other than this Superman was doing it.

Maybe it's a matter of the length of time it takes for Superman to go from widower to slaughterer of the innocent. In the comics this happens over the span of four years, but it feels like weeks, maybe months in the movie. There's no sense of time or scale to the events, just a rush through key moments so we can see the development of Superman's "perfect new world". Like many other DC animated films this movie rushes through the whole story in a scant 80 minutes, going from horrible inciting incident to resolution of the whole story so quickly that it's hard to really care about anything. Speed hurts a story like this where there are so many characters, so many moments that matter that speeding through it all leaves it feeling like nothing really sticks. 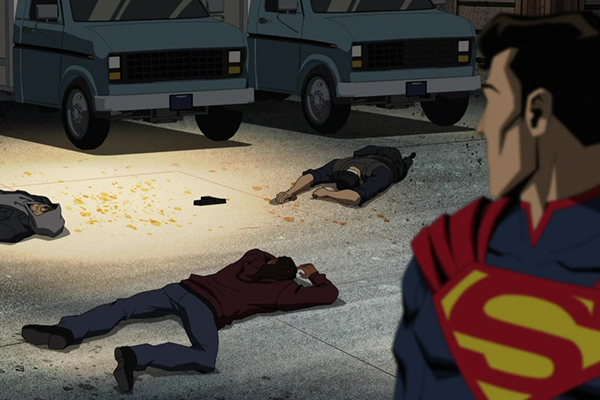 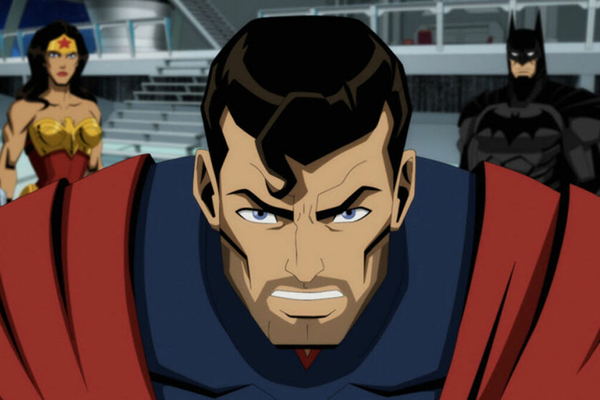 So I was annoyed at seeing a story I'd seen before, but I was also annoyed that the movie had to rush to tell it. On the latter front I think making the movie longer, something closer to 110 minutes, could have helped a lot, allowed everything to breathe. We needed more time in the quiet moments, more time to think and plot and connect with the characters. The films 80 minutes aren't enough but I wouldn't want to see this stretched across two films -- we've seen that done before with movies like Batman: The Long Halloween, and it usually results in a movie that feels overly padded to make a vastly expanded runtime. DC needs to figure out the right length for these movies but this movie clearly illustrates that 80 minutes isn't enough.

At the same time I wonder if there's a hero that would be more interesting to see cast as the villain. Batman is always on the knife's edge of being a crazed villain but I don't know that seeing him go bad would illustrate anything we didn't already understand about the character. An evil Batman would be near-indistinguishable from the Joker, aside from the flamboyant clothing, so there's not a lot of meat there. I do wonder what a story about an evil Wonder Woman would be like. A woman raised by Amazonian ideals, sent to America to act as her icon as well, who then has an inciting incident that forces her to turn her back on everything she knows. That could be interesting, but considering Wonder Woman is a warrior, willing to fight and kill for what she believes in, I still have to wonder if an evil Wonder Woman is really that interesting.

Maybe it's just that "good hero goes bad" is so played out that the whole genre needs to be set aside for a while. There have to be other stories we could explore in a game/comic/movie multi-media franchise, right? Whatever the case, I felt like this film didn't really nail the necessity of the story. Maybe this is something that plays out better in a video game, where you're in the visceral thrill of it and the issues with story and substance don't matter as much when you're throwing gore left and right. Perhaps Injustice simply needed to remain a video game after all. What's certain is that, as a film, it feels pretty flat.