There's a Double-Agent in the T-Building

I think it's fair to say that, at times, the DC Animated Movie UniverseWhile DC Comics was amping up production on this big "MCU-killer", the DC Extended Universe they were also quietly putting together another shared movie continuity, the DC Animated Movie Universe. This series was more closely related to the comics, directly adapting a number of famous storylines to, arguably, better effect than the live-action movies could. has been a touch hit or miss at times. For all the really good films in the run -- films like Batman vs. Robin and Justice League Dark (and those are uneven themselves, as good as they are) -- there have been a lot of stinkers (like Batman: Bad Blood). When the films really settle down and tell a focused story, though, these productions can really sing. 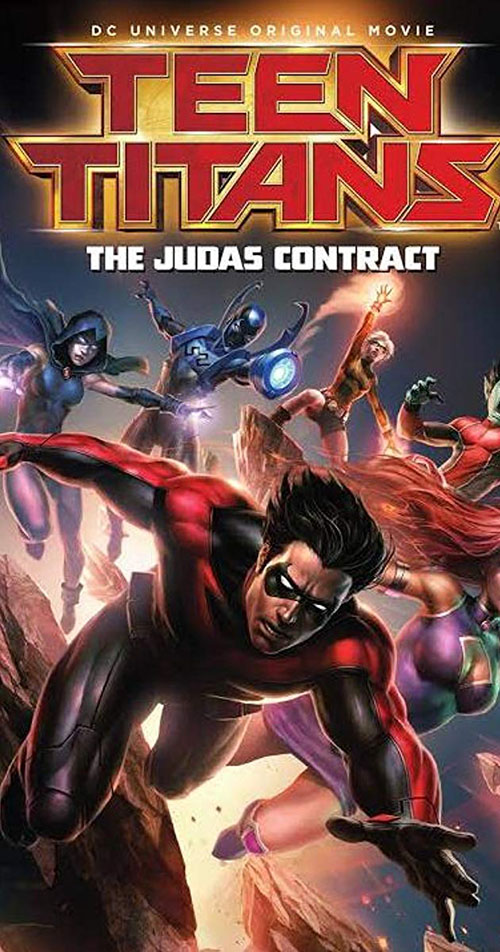 Of course, Teen Titans: The Judas Contract benefits from being a sequel to Justice League vs. Teen Titans since that previous film (being a Justice League film basically in name only) did all the heavy lifting of introducing us to this universe's version of the Teen Titans. With the character introductions out of the way (and with the focus solely on the Titans (and not Batman or Superman or the Justice League or whatever other major team they want to shoehorn in as well) we get to spend a lot more time with this team learning about them as characters, finding out who they are as people, and watching them work. It allows us to bond with them in a way, honestly, we haven't managed to bond with any of the characters since the first real film in this series, Justice League: War.

Arguably, this film does a better job of really letting us bond with the titular heroes in a way even JL: War couldn't, simply because that film still had to get introductions out of the way while this one could just let us enjoy the characters and focus on them as people. I would actually say this is the first film in the whole series that's let us do that since so many of them are trying into introduce new lands, new characters, new power sets, that the focus on characters is almost always lost. What that gives us is not only a team we can understand (as we see them as real people, Damien Wayne included) but also a story we get get into and enjoy because we see how it affects each of the characters in turn.

In The Judas Contact, our familiar band of heroes -- Starfire, Nightwing, Robin, Raven, Beast Boy, and Blue Beetle -- are joined by new recruit Terra as they take on H.I.V.E., and organization with ties to cult leader Brother Blood. Blood feels that all meta-humans (and superheros) are a blight upon the land, blasphemy in the eyes of God. It just so happens that, due to his own meta power, Blood is immortal and thinks he's the God. As such, his plan is to somehow capture the Teen Titans (not kill them, even though they're on his trail) and use them to give himself immense power, turning him into the literal god he believes himself to be. So, to do that, he teams up with an old nemesis of Damien Wayne, Deathstroke, who was presumed dead back in Son of Batman, but is back, alive, and looking for revenge. Together, these two might just be able to take down the Titans, especially with a little help from within.

Yes, there is a twist in the story of The Judas Contact but it's one that, if you are at all familiar with DC ComicsOne of the two biggest comic publishing companies in the world (and, depending on what big events are going on, the number one company), DC Comics is the home of Superman, Batman, Wonder Woman, and just about every big superhero introduced in the 1930s and 1940s. characters and history, will be completely obvious from the start of the film. I won't spoil it here just in case you're going into this movie fresh (even though the film is two years old so I tend to feel like I shouldn't have to worry about that) but suffice it to say that the twist isn't really all that spectacular. In fact, I'd say it's basically expected even if you don't know the characters and situations in this film because, really, it's pretty obvious all things considered. 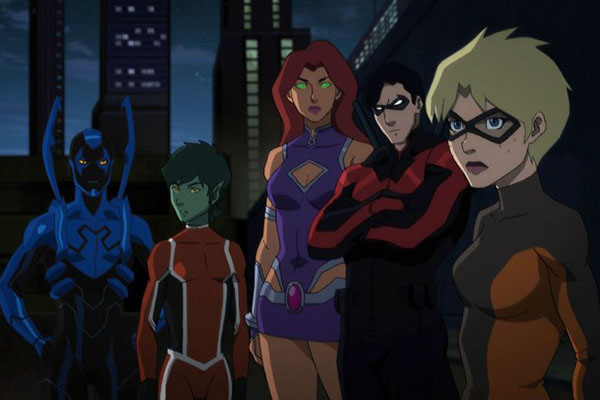 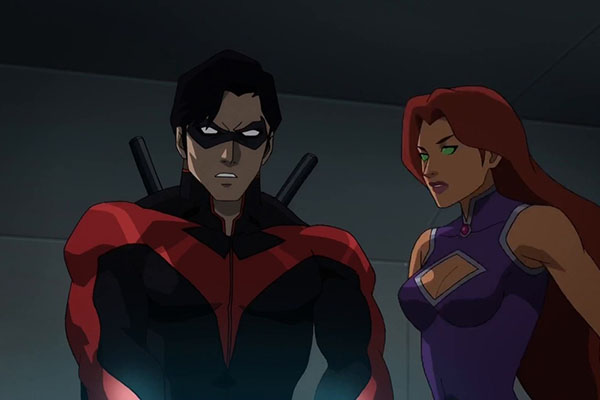 And, frankly, the last act of this film gets a little weak. Brother Blood, despite all his build up, is a pretty lackluster villain. Deathstroke is better, charismatic and interesting, a real evil force (which is why ever version of the Teen Titans end up going against him), but he's a pawn in the story of Brother Blood. Watching Blood's plan come to fruition isn't really all that interesting simply because we know, deep down, the Titans will somehow get out of any scrape they're in, especially against a C-rate villain like this. If they film could have just focused on Deathstroke and his own master plan it might have done better. Certainly we might have felt like the heroes were in real danger just because Deathstroke is the natural big bad for these teens. He's a real force, so pairing him with Blood was a real misstep.

Also, i want to point out that that opening section of the film, where we follow a previous version of the Teen Titans, doesn't really work in the timeline we know from War onwards. That film supposedly picked up with the various major heroes are the star of their various careers while, here, this team of sidekicks would seem to imply a much longer timeline with more time for the heroes to bond, develop sidekicks, and have the sidekicks team up. It's a minor quibble, to be sure, but watching all of these in quick order I was a little confused at how it could all fit together.

But that all doesn't change the good work the movie does with our heroes. We get plenty of time with the Titans to find out more about them. We learn how Starfire came to this world and that she and Nightwing are dating. We learn about Blue Beetle, the struggle he has keeping his grafted symbiote in check, and how the alien tech is having trouble understanding humanity. And there's Terra and Beast Boy, the latter of whom is in love with the former while the new girl has her own issues (and scary background) that colors everything she does. If anyone gets shortchanged its Damien (who has already had four movies with him in a lead role) and Raven (who was the focus of the last film), so even then it's not a hardship to focus on other characters.

Focus is the key of this film. The Judas Contact really wants to spend time on the setting, on the team, and that may be a detriment to the villain but I think it's a bonus for the characters. I appreciated that we got to spend so much time with these heroes just seeing them learn about themselves, finding their own paths through life. It allows everyone to have a chance and be real people which, in turn, makes the whole world feel more realistic. Too often in this movies, due to time constraints, we get a couple of simple character moments before the heroes have to rush through the plot the movie is adapting. Here, though, the plot is dictated by the heroes (not the other way around) so we get to experience everything through their eyes. It makes the story more interesting and gets the audience better invested. 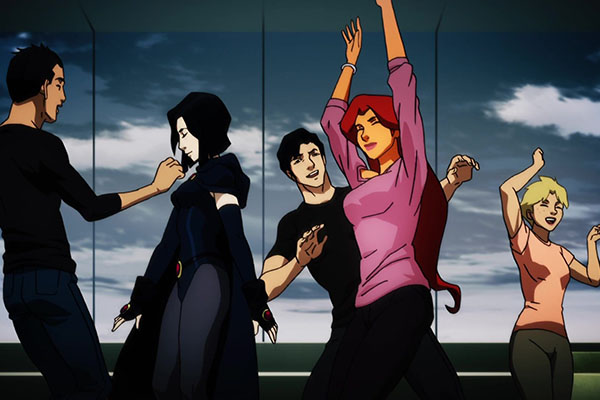 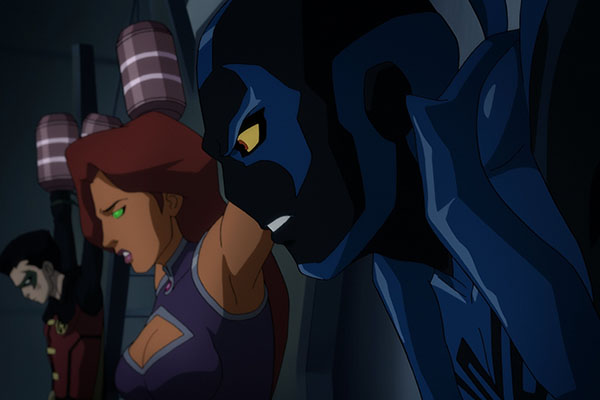 Sure, Brother Blood never becomes a solid villain but that's just another symptom of the time constraints. The reason I think the movie should have focused on Deathstroke instead is because he'd already been introduced, and fleshed out, in previous movies. That allows us to already know who he is, to understand him at a basic level. If the team could have just fought him and whatever machinations he was working on, we would have already have an investment in the proceedings. We know this villain, he's someone we're ready to root against. But Brother Blood? He's new. He doesn't matter to us. If he could have been introduced here for a future adventure of the Teen Titans, that would have worked better for his character as it would have allowed us time to get to know him. In long-form storytelling it's best to slowly trickle in threats so the viewer has time to prepare for them.

Still, I really like this team of heroes. They're an enjoyable bunch and 90 minutes with them is great even with a less than stellar third act. The action is great, the character moments are even better, and the movie ends with us wanting to see even more of the Titans. That's the best possible outcome we could have hoped for from one of the direct-to-video animated films.