Bats in the Belfry

With the DC Animated Movie UniverseWhile DC Comics was amping up production on this big "MCU-killer", the DC Extended Universe they were also quietly putting together another shared movie continuity, the DC Animated Movie Universe. This series was more closely related to the comics, directly adapting a number of famous storylines to, arguably, better effect than the live-action movies could. essentially following the path of the New 52, there were really only so many stories that could be told in the BatmanOne of the longest running, consistently in-print superheroes ever (matched only by Superman and Wonder Woman), Batman has been a force in entertainment for nearly as long as there's been an entertainment industry. It only makes sense, then that he is also the most regularly adapted, and consistently successful, superhero to grace the Silver Screen. portion of the universe. Without Jason Todd or Tim Drake (who do exist in the New 52 but haven't been introduced in the DCAMU), that limits focus of the stories to Bruce Wayne / Batman, Damien Wayne / Robin II, and Dick Grayson / Nightwing. Where do you go from there? 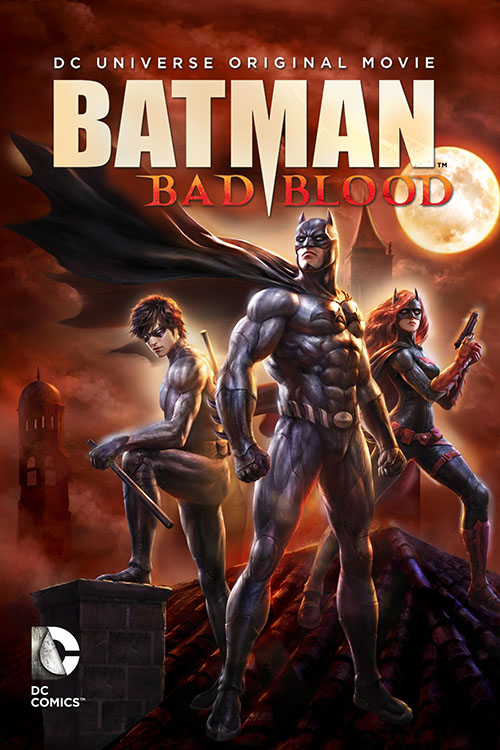 Well, in the case of Batman: Bad Blood, the choice was made to introduce more Bat-people into the universe while, at the same time, removing Bruce Wayne from the equation. At least partially based on the run of Batman & Robin, the movie sees Batman disappearing in an explosion (one that, in the movie, is witnessed by new character Kate Kane / Batwoman), leaving Dick Grayson to down the cap-and-cowl to keep Gotham City safe. Batman is a symbol for the city, and without that symbol stalking the night the criminals of the city have decided that the city is fair game for a hostile takeover. Dick wearing the cape (and Damien backing him up) is only a stop-gap measure, though -- the real goal is to find out what happened to Bruce and, if he's still alive, rescue him and get him back to full health.

It's no secret that the Dick Grayson / Damien Wayne run of Batman & Robin is one of my favorite storylines from recent DC ComicsOne of the two biggest comic publishing companies in the world (and, depending on what big events are going on, the number one company), DC Comics is the home of Superman, Batman, Wonder Woman, and just about every big superhero introduced in the 1930s and 1940s. history. The juxtaposition of a Robin as dark as the first Batman against a lighter, friendly Batman created a really solid dynamic. It was fresh and interesting, and it was one of the few runs of Batman comics I bought, start to finish. I was honestly sad when Bruce Wayne came back from the dead (because heroes in this stories never really stay dead) and took back over on his main book. The character dynamic between Bruce and Damien just isn't as interesting to me as the the one between Dick and Damien. And, unfortunately, the movie kind of pulls the same trick.

Dick putting on the cape and cowl to take over for Bruce is treated with respect here. Unfortunately it's only about a third of the movie's runtime. It's a great story, and the movie tries to do what it can with the dynamic between Dick and Damien, but it's just never given the focus it deserves. Instead of making the movie all about Dick and Damien learning to work together to keep Gotham City safe (you know, the story of much of the Batman & Robin run), it instead spends a lot of time developing new characters Kate Kane / Batwoman and Luke Fox / Batwing. Certainly I appreciate these characters being introduced into the movie continuity -- more representation is great, and I'm glad they put in a lesbian character and a African American as well -- it just would have been nice to give the movie more focus on the main dynamic between Dick and Damien before it started fleshing out more of the Bat-family.

Put another way, I wish this film had been split into two parts. Part one could have been the strongest section: Bruce going on his mission, getting apparently blown up, and then Dick taking over the duties of Batman. Some hints could have been dropped about a secret organization behind the scenes (one that is eventually, in the second and third acts, revealed to be backed by Talia Al Ghul) but the focus would have been on the two heroes learning to work together in this new dynamic while they take on some other threat (maybe Professor Pyg, as in the comic version of this story). You could still drop some references to Batwoman and maybe even start the origin for Batwing, but neither of them should have really come in at this movie until the end when it's revealed that Bruce is alive. Then, in part two, Dick could pull together the Bat-family, bringing Batwing and Batwoman onto the team before they start the hunt for Bruce, Talia, and the League of Shadows. 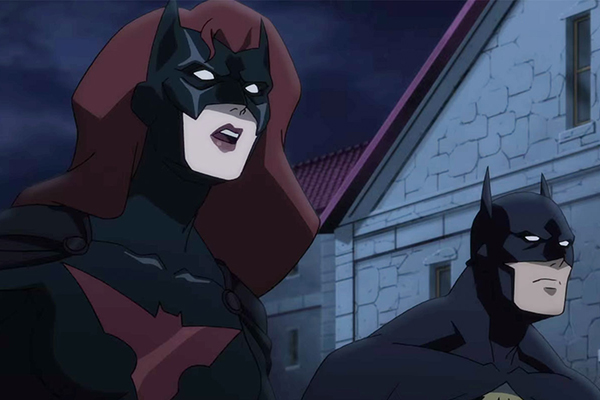 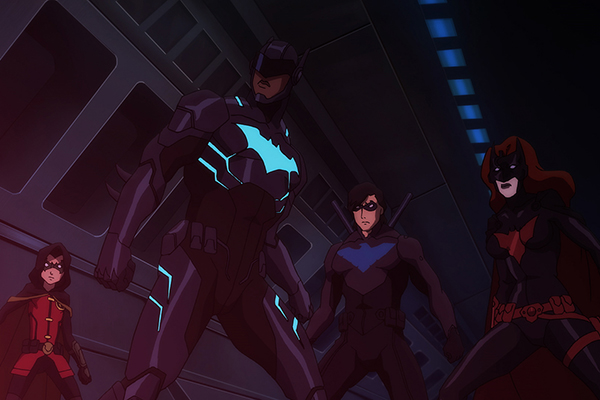 As the movie is currently written all of the plots are mashed together and run over each other, fighting for air. If, instead, the storyline of the movie had been given time to breathe by breaking it up into two flicks, everything could have smoothed out. The movie could have taken time to develop characters and show their various dynamics. But, most of all, it would have treated the Dick / Damien paring as the new normal instead of just making it a placeholder until Batman shows up again. What should be the core story of this movie is given the short shrift as the film burns through plot and story to get to the final confrontation between Talia and the Bat-family.

Splitting a story like this up into two acts isn't as crazy as it sounds. DC has a history of doing just this, dividing up The Dark Knight Returns into a two-parter while the original, long-form Death of Superman arc has been more recently given the proper, two-movie treatment. If Batman had died in one movie and then failed to return for a while (especially if there had been some Justice League movies in the middle of all of it to make it seem like his time away was actually more than half-a-month), this would have given Bruce's "death" some actually emotional weight.

Because that's what's missing from the core of this movie: weight. From the moment Bruce seemingly dies the movie treats it like a foregone conclusion that the character is returning. No one mourns for him, no one ever thinks he's really dead. If the characters don't feel it, how are we supposed to? And if Batman clearly isn't dead then Dick taking over the title of "Batman" is clearly just to kill time. Nothing here really matter, nothing has consequence like it should, which then means that the last-act reveal of Bruce, alive and well, doesn't stick like it should.

There is a lot to like about this movie. The art is solid, for one thing, with the the DCAMU house style -- a seeming mix of classic comic art with anime influences -- really settling into shape. We're only six movies in and the art style has already grown by leaps and bounds, looking so much cleaner and more dynamic than it did back in The Flashpoint Paradox and War. 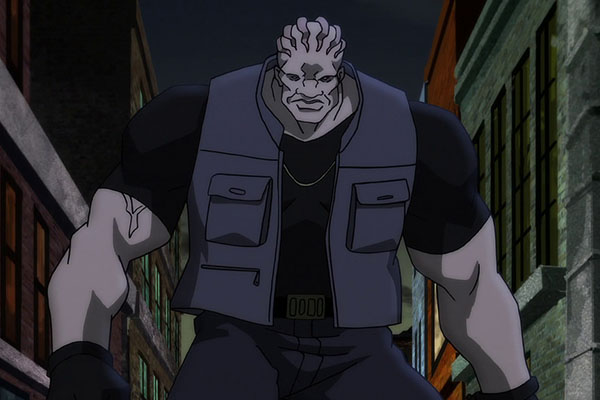 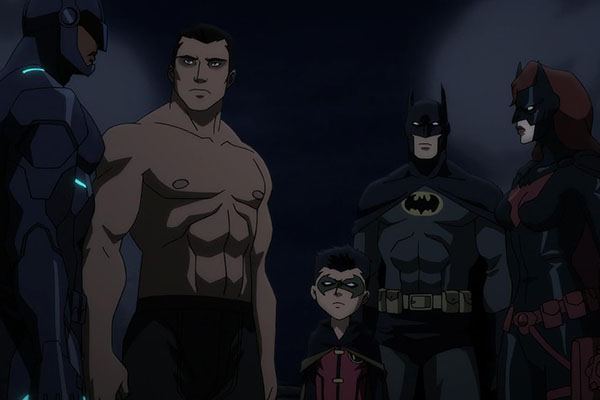 And while I argue about the necessity of giving so much time to the new Bat-family characters when we really need to explore the Dick / Damien dynamic, it's hard to argue with how these two characters are treated. Batwoman certainly gets more screen time, almost serving as a top-billed character alongside Dick, and she's treated with depth and dignity. Batwing doesn't get as much screen time but he's given a solid back-story and good reason to want to don the mechanized wing-suit. I like these characters I just wish that, like with everything else in this movie, they had room to breathe.

Really, in the long-run, what hurts this movie most is that nothing that happens here has any consequence in the rest of the DCAMU. Batwoman and Batwing are introduced here (along with a blink-and-you-miss-it Batgirl cameo), but neither of them show up again in later films. Dick gets to be Batman for a little while, but he's already back to being Nightwing by movie's end. Everything here seems like it's setting up a continuing story about the Bat-family, but this also happens to be the last Batman movie we get in the universe (at least for now -- who knows down the road?). Damien goes off to join the Teen Titans after this, while Bruce does a couple of Justice League adventures before disappearing.

So, really, what's the point. What did any of this mean? Nothing. This film is a weird setup for what could have been with no follow up. I want to like it because there are good ideas in the film, but when none of it pays off you have to wonder why it even exists at all. While the film is pretty, and well acted, it's also the least essential film in the DCAMU.