Beyond the Present! Beyond Reason! Beyond Logic!

Batman Beyond: Return of the Joker

Although I managed to watch a fair bit of Batman: The Animated Series while it was on the air (especially once it got paired up with Superman: The Animated Series later in its life), I didn't ever really tune in for Batman Beyond. It was a cool concept, certainly -- BatmanOne of the longest running, consistently in-print superheroes ever (matched only by Superman and Wonder Woman), Batman has been a force in entertainment for nearly as long as there's been an entertainment industry. It only makes sense, then that he is also the most regularly adapted, and consistently successful, superhero to grace the Silver Screen., but in the future -- that I'm sure I would have enjoyed the hell out of it while it was on the air. The year it debuted, though (1999) was the year I went off to college and, after that, I just didn't have a lot of time to catch the show while it aired. 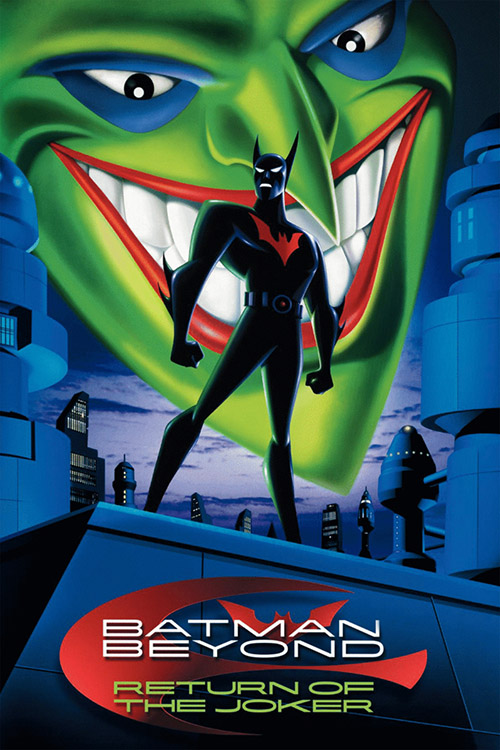 The character of "Batman Beyond" (who is just called "Batman" on the show, and could just be called "Batman II" in the continuity of the series) would go on to have quite a successful life. His series aired for three season (which, considering the original Batman: The Animated Series went a total of four across the main series and a continuation season, is pretty good), launched a spin-off (The Zeta Project), and even had a tie-in animated movie: Batman Beyond: Return of the Joker. Even after this the character would live on, getting cameo appearances as Batman's potential future incarnation in video games and comics, and the character himself would continue on in one comic series or another for a long time to come.

Released mid-way into the third season run of Batman Beyond, Return of the Joker almost feels like a series finale for the show (coming out just two months before the series went off the air). It's a movie that not only works as a tie-in to Batman Beyond but also has a number of scenes set back during Batman: The Animate Series, and it helps to explain the tense relationship between Batman and Commissioner Barbara Gordon in this future-set series. It is, honestly, the finest example of how Warner Bros. could use these tie-in movies to not just present another adventure for a superhero but actually flesh out their world in a meaningful way. If only more DC ComicsOne of the two biggest comic publishing companies in the world (and, depending on what big events are going on, the number one company), DC Comics is the home of Superman, Batman, Wonder Woman, and just about every big superhero introduced in the 1930s and 1940s. could pull off this trick.

We a dropped right into the action as Batman Beyond (Will Friedle) diving in to stop a technology heist by the Joker Gang, a future crew of misfits that took on the JokerOne of Batman's first villains, and certainly his more famous (and most popular), the Joker is the mirror of the Bat, all the insanity and darkness unleashed that the hero keeps bottled up and controlled. name: the two girls named Dee Dee (both voiced by Melissa Joan Hart), the Scarecrow-like Ghoul (Michael Rosenbaum), fat clown Chucko (Don Patrick Harvey), beefy Bonk (Henry Rollins), a "spliced" hyena-man Woof (Frank Welker). Although the heist is foiled, the gang gets away, and the crime leads Beyond and original Batman (Kevin Conroy) to debate what the point of the crime was (as it clearly wasn't for money). Eventually the mystery deepens when, like a ghost from the past, Joker (Mark Hamill) returns, seemingly having seized control of the Joker Gang.

Joker's return seems impossible, though, as Batman saw Joker die years earlier. As we eventually learn, back in the day, Joker kidnapped Robin II / Tim Drake (voiced in the past by Mathew Valencia), leading Batman and Batgirl (voiced in the past by Tara Strong) to search Gotham for the missing lad. Eventually they find Joker's hideout where Joker and Harley Quinn (Arleen Sorkin) have set it a messed up little home and, in the processed brainwashed Robin into becoming Joker, Jr. This leads to a massive battle between heroes and villains and, eventually, Robin kills the Joker. But if Joker is dead, how could he be here in the future? Is this all a trick or has the Clown Prince of Crime really returned? 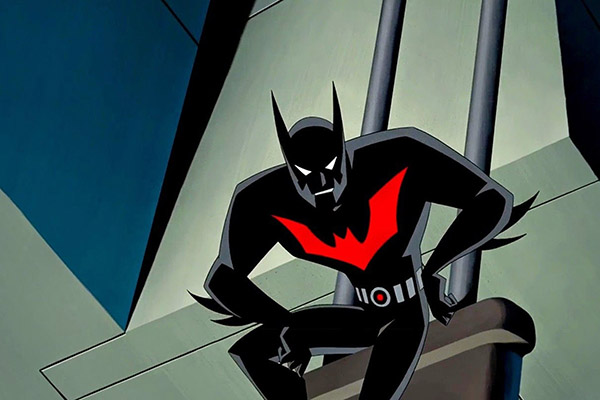 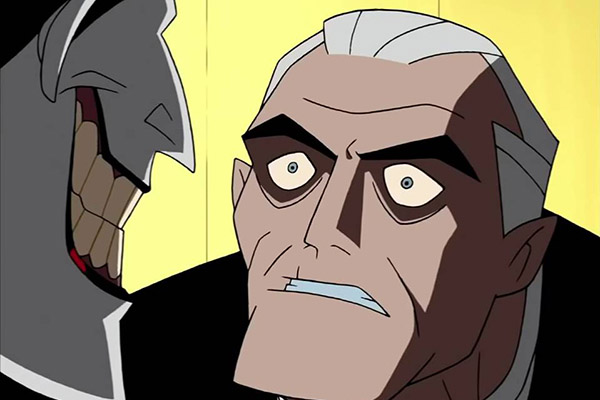 In a number of ways I really enjoyed this film. For starters, let's not undersell how cool the future setting is. While the original series had to remain grounded (as much as any superhero show does), trying to at least represent a version of Gotham that could seem realistic in the modern day, Batman Beyond wasn't tied down by those rules. If they wanted ray guns and flying cars and space lasers, all of that was possible simply by saying, "it's the future!" and hand-waving it away. This, coupled with cool character designs for the heroes and villains, and real investment in making both Batman I / Bruce Wayne and Batman II / Terry McGinnis into real, fleshed out characters, make not only this movie, but the whole series, into a truly watchable experience.

One down side of the movie is that, like with Batman: Mask of the Phantasm and Batman: Mystery of the Batwoman, we have yet another mystery character stroll into town and Batman (and crew) have to figure out who he truly is. This does feel more than a little tired at this point, as this is a trope apparently ever Batman film has to fall into in this animated universe. That said, the film does at least take a different tack this time, actually giving us a real mystery (with plenty of red herring characters) instead of just giving us a new character (or, in Batwoman, three characters) who end up being our new character. There's a mystery here, to an extent, and it works.

Of course, the real power of the episode comes down to the return of Mark Hamil's Joker. I'm not saying Batman Beyond needed Joker in it -- the fact that the show was willing to diverge from the main rogue's gallery and forge its own path is one of the highlights of the series -- but Hamil does bring his full acting charm to the Joker, making for one of the best on-screen interpretations of the role. I like the interplay between old Joker and new Joker Gang (mirroring Batman and Beyond), and I love all the evil and delicious slime Hamil brings to his Joker here.

Having also gone through all the other Batman animated movies up to this point, I also appreciated how this film worked to tie the two series together. While Batman Beyond had it's connections to the original series -- Batman and Barbara Gordon specifically -- this show honors and respects the previous series by working in a series of scenes set during that show (and the movie continuity after). This, more than Batman & Mr. Freeze: SubZero or Mystery of the Batwoman, feels like a proper series extension for whole run, and even functions nicely as a true series finale for the original run as well. 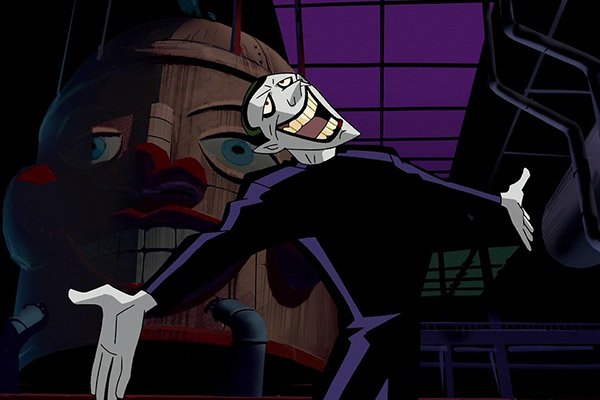 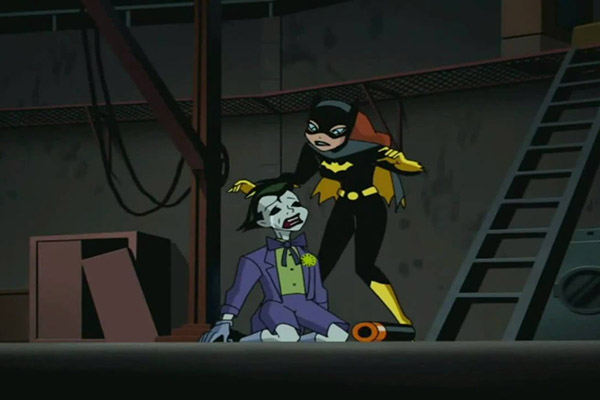 Plus, honestly, it's just so well designed. I've complained in the past that the animated movies for this continuity don't look all that great (SubZero being especially egregious), but this film actually looks really solid. The studio WB farmed this out to, Tokyo's TMS Entertainment, crafted a well-animated, detailed, and lushly drawn version of Batman Beyond. This film lacked the weird compositing issues and cruddy, grainy colors of the previous direct-to-video efforts, making a film that actually looked good enough to air on the big screen (even though this went direct-to-video).

Any niggling issues I have with the film (some minor plot details; the weird and contrived way it's explained that Joker comes back, which I won't spoil here) are balanced out by the quality of the production. This is the kind of film I was expecting from the DC Animated Universe and I'm glad that finally, after three previous attempted, Warner Bros. finally delivered. It makes me actually want to go back and watch the whole run of Batman Beyond now.