The Two-Faced Tyrant of Terror!

Although I will admit that I wasn't impressed by the cartoon revival of the Batman '66 series, Batman: Return of the Caped Crusaders; it was fun to see that realm of BatmanOne of the longest running, consistently in-print superheroes ever (matched only by Superman and Wonder Woman), Batman has been a force in entertainment for nearly as long as there's been an entertainment industry. It only makes sense, then that he is also the most regularly adapted, and consistently successful, superhero to grace the Silver Screen. rendered again, but I didn't feel like the animated did a very good job of either committing to the bit or pushing itself well outside the comfort zone of the original content. It was a mixed bag, really, and I wanted more. 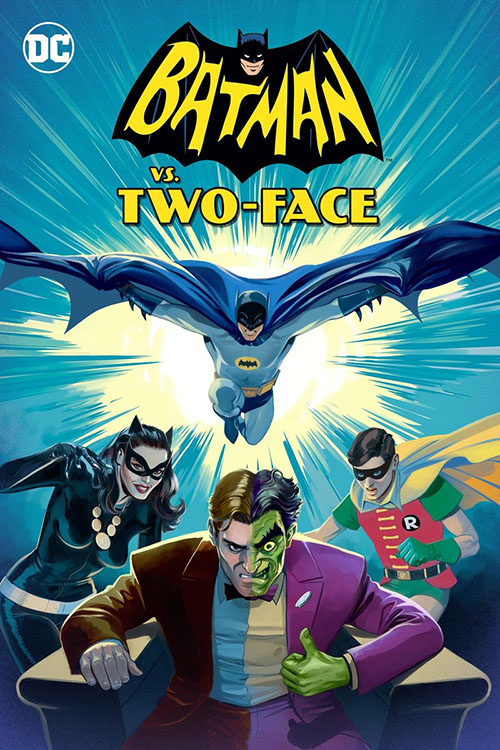 I was likely in the minority at the time, though, because the first animated film sold well enough to warrant a sequel: Batman vs. Two-Face. Like the first animated film, this is a wholly original story set in the Batman '66 continuity featuring Adam West and Burt Ward returning to their most famous roles. Interestingly, this film marks the first time Two-Face would appear in that continuity as, although the producers tried repeatedly to develop scripts for the character, Two-Face never actually appeared in the series. In a brilliant move, the films casts William Shatner in the role, adding some more, much needed 1960s star power. Overall this is a better film than the previous effort but, still, something essential is missing to really make it a winner.

As the movie opens, Batman (West) is outside the prison cell of Catwoman (a returning Julie Newmar) courting the felonious feline as she serves her time for past crimes (as alluded to in the previous film, even if she seemingly died then). He then ventures to the state penitentiary with Robin (Ward) to view the new experiment by Hugo Strange (Jim Ward), a machine that will extract the evil from the most notorious supervillains Batman has ever faced (Jeff Bergman as JokerOne of Batman's first villains, and certainly his more famous (and most popular), the Joker is the mirror of the Bat, all the insanity and darkness unleashed that the hero keeps bottled up and controlled., Wally Wingert as Riddler and King Tut, William Salyers as Penguin, and an uncredited Mr. Freeze). The heroes are joined in the viewing by new D.A Harvey Dent (Shatner), who is hopeful this machine will help keep the city perpetually safe. The villains, however, forcibly overload the machine, causing it to rupture, splashing its evil across Dent, turning him into the evil Two-Face.

After an opening montage that then shows Two-Face's reign of terror, we find Harvey recovering in the hospital after an operation to heal his face and cure him of Two-Face's influence. Seemingly healed and a sane member of society once more, Harvey is admitted back into the District Attorney's office where he help Batman put away criminal after criminal. But while Harvey seems fine, a new, mysterious villain has taken over the crime wave started by Two-Face. Is it Harvey, back to his old ways, or has someone knew picked up the mantle of Two-Face? Only Batman and Robin can figure it out!

In general I do feel like this film is an improved version of what we saw in Batman: Return of the Caped Crusaders. I wouldn't say that first animated film played it safe as it was clearly poking fun at the original 1966 series, in a loving way, but it did feel like it somehow held back, was a little too reverential to the source material. It wanted to play in the pond but, for the most part, didn't really want to offend. While it did manage to give Robin and Catwoman their first heroic adventure in this continuity outside the Batman's shadow, it just didn't find enough energy to really sell the material. 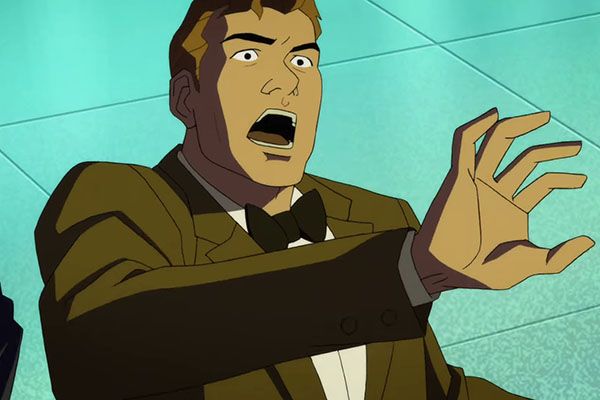 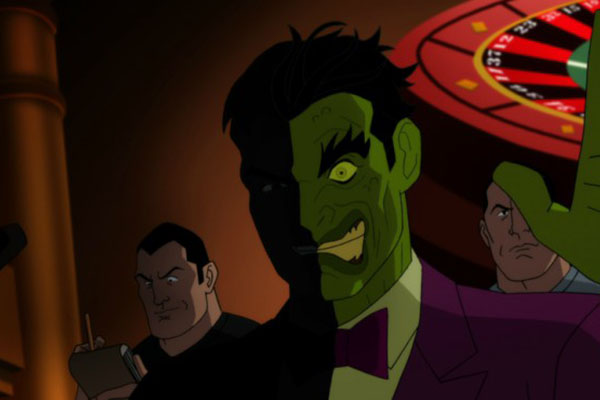 That's not the case here as this time we get some pretty solid setup and delivery from scene one. The story kicks in early, and from start to finish we have our singular villain, Two-Face, and we know who Batman will be taking on and what the plot of the story will be. That helps to keep things much more focused than the previous effort and aids in keeping the film on task and energetic.

The inclusion of Two-Face really is a brilliant stroke. Because he never officially appeared in the 1966 series, just putting him in the film already gives the movie its own energy. They can craft their own take on the character without having to be reverential to source material, and it frees the producers to tell their own story in their own way. Shatner, it should be noted, does a great job in the role, finding the right energy, smarmy yet funny and the right level of committed to the role, to really make Harvey Dent feel like a properly realized character.

It helps that the movie spends a lot of time on setup for him. While other villains show up in cameo roles (including a setup for Harley QuinnCreated to serve as "Joker's Girlfriend" as well as his primary minion for Batman: The Animated Series, Harley Quinn quickly grew to be one of the most popular characters of that show, eventually finding a solid life beyond the cartoon in comics, movies, and media. that, weirdly, goes nowhere and now never will), this is the Harvey Dent show. We learn his back-story, see his crime spree, and get to know both halves of his double life, making this one of the best realized villains in all of the Batman '66 continuity. By far the best villain we've seen in these films yet.

The downside of all this focus on Harvey, though, is that other characters don't quite as much development. Newmar's Catwoman shows up here again, but where she got to play a leading role in the last film, she's reduced to love interest and occasional cameo character, a serious downgrade for her. The film also introduces lawyer Lucilee Diamond, played by second Catwoman Lee Meriwether, and she's also reduced to a cameo role. We do get a fun nod to her past in the role with the lawyer getting knocked out by Catwoman and dressed in the Cat-suit, but again this is a cameo that doesn't go anywhere, at least not in this film. 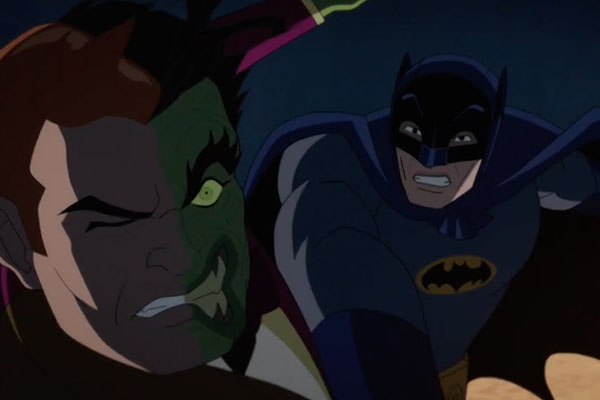 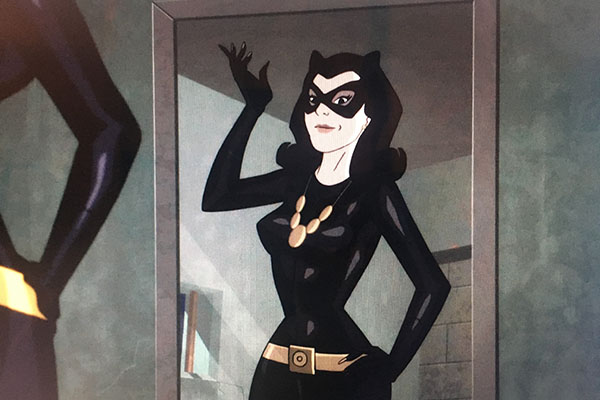 The biggest let down in the film, though, continues to be Adam West. While it's nice to have as many classic actors back in their roles as the film supplies, it still doesn't feel like West is invested in Batman. His voice performance is low energy in comparison to everyone else and it just doesn't suit the character. He's constantly in quiet teacher mode, condescendingly speechifying at us when we need him to find a bit of heroic voice and really sell the role. Maybe his attitude was something the producers wanted, maybe they found it funny, but it just doesn't work for me here.

I still don't think this film knocks it out of the park. It's certainly a solid improvement over Batman: Return of the Caped Crusaders, but there's an essential element, that central Batman to really unify it, that's missing. Everyone outside of Batman is great, and the film really starts to let loose from the main continuity, finding its own feet to stand on, but it doesn't quite gel like it needs to. It's an easy layup when it could have been a home run with e more engaged Batman.

Sadly any plans the producers might have had for a third film, one that could have really nailed this continuity (maybe a Joke and Harley Quinn film, or something with two Catwomen) were canceled when Adam West died. This was his final role and he was the essential ingredient to these films and their continued success. However good or bad I might have felt he was here, you can't make Batman '66 films without him. I think these films had the potential to really get good as this one was a big improvement. We just won't know where the films could have gone now.