I originally wanted to write about this new movie, Batman Ninja, last week during "Batman Week" here on the site, but I had a lot of other movies to cover at the time. I also kinda wanted to write about it at the same time I covered another weird Western-Asian hybrid flick, The Great Wall. So instead we get to talk about it today. 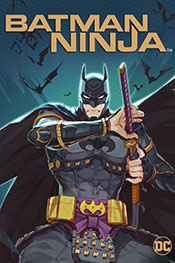 Man, is this movie weird. Things start of relatively normal (in the context of a Batman movie, anyway) with Batman and Catwoman heading up to Arkham Asylum to battle with Gorilla Grodd. Grodd, apparently, have invented some kind of time control device but, due to Batman's interference, the device goes off early and everyone in Arkham is transported back to ancient Japan. Batman, being the last to enter the portal, shows up two years later than just about everyone else.

Once he gets there he finds that things aren't exactly as they should be. Joker and the other major villains have taken over five provinces across the country and are waging war with each other in an attempt to become the next Shogun. They've also, somehow, built giant transforming palaces that can become walking mechs (because this is an anime). Thankfully, to take on these villains, Batman will find help from the various Robins (Robin, Red Robin, Red Hood, and Nightwing), all of whom were also sucked into the portal. And he'll have to contend with Gorilla Grodd, the time device, and whatever other schemes Joker has in mind.

That description might not sound so strange, but believe me it gets quite weird. The transforming palaces were odd enough (if not unexpected for anime), but then we also have intelligent monkeys, armies of ninjas, giant robot-kaiju and giant monkey-kaiju (seriously), and Batman somehow gaining magical ninja powers. The anime keeps on-upping what's going on, always adding some new weirdness to the proceedings in an attempt to continue the energy and build to some kind of climax. Unfortunately it all gets so tiring after a while.

Part of my issue, too is that the movie is so over-stuffed, not only with anime weirdness but also just with everything else going on. There are all of Batman's helpers, none of whom really get a lot of time to shine. Red Hood gets a full scene to himself and his biggest character trait that we can take away is that he's murderous which, sure, he is in the comics too but he's also more than that. The same issue exists with the villains -- only two of them area really important to the plot, Grodd and Joker, while the rest (Poison Ivy, Two-Face, and Penguin) are just background filler and occasional pawns in the plot. Why even bother including them when various actual Japanese characters could have been used instead to the same effect. Maybe they'd even have had actual plotlines if the writers would have taken the time to think about them in that context. 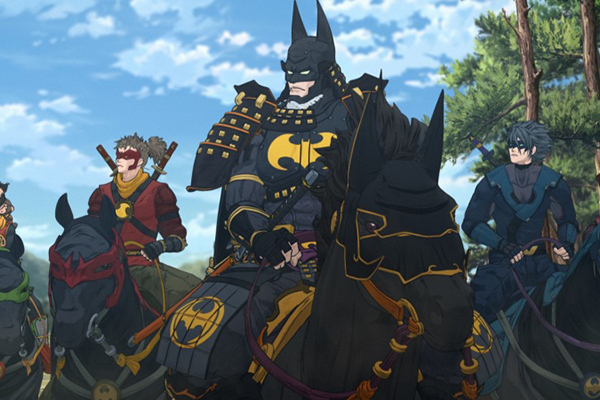 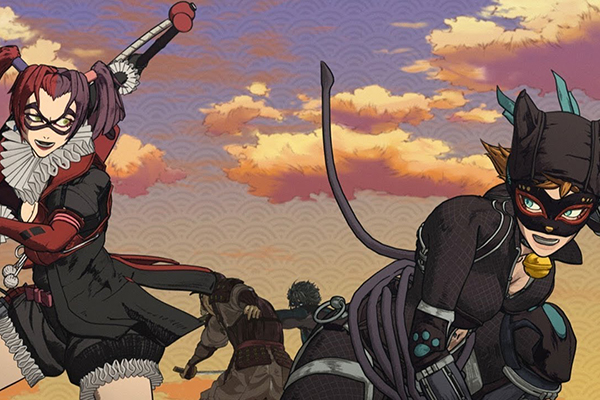 But no, the movie has to rush from one plot device to the next, bringing the action beats often without a whole lot of time to breathe. Things happen without a lot of context to them. Why can the palaces turn into giant monsters when a cursory study of ancient Japanese technology would seem to indicate that's ridiculous? How did each of the villains become leaders of their provinces? How do any of the special powers work? Why is there a cult of ninjas worshipping Batman before he even gets to Japan? Any or all of these questions could have been their own episodes in a much longer epic, but instead all of this, and more, is crammed into an hour-and-a-half flick. It's just so much and it never settles down to tell a cohesive story.

Plus, let's be honest, in 2018 it's a little weird to have a white guy (Bruce Wayne) go back and say Japan. That's the kind of "white savior" trope people always grouse about, but it goes by without a mention here. Hell, that entire group of ninjas apparently has been waiting this whole time for their white savior to show up, and we accept it because he's Batman so of course. That makes perfect sense somehow.

And sure, maybe what people want is a big dumb movie they didn't have to think about. Maybe a fast-paced, over-the-top, ludicrous anime that's too dumb to see its own inherent flaws is exactly what fans want when they hear a movie is titled "Batman Ninja". I, however, was left wanting.

Admittedly, some of my frustration with the movie is probably due to the fact that I don't much care for anime. Normally I'd avoid a movie like this because the storytelling conventions of anime just don't thrill me. But this is a Batman movie so if there's any anime I'd expect to be able to get through it would be this. Sadly, that just wasn't the case.