A New Woman in Town

Batman: Mystery of the Batwoman

For a while there the DC Animated Universe was the most successful filmed universe DC ComicsOne of the two biggest comic publishing companies in the world (and, depending on what big events are going on, the number one company), DC Comics is the home of Superman, Batman, Wonder Woman, and just about every big superhero introduced in the 1930s and 1940s. ever managed to put together (and the argument could be made that it remains so). Across a number of TV shows and filmic continuations, the series cranked out a ton of media that was (generally) beloved by fans. Even now, all these years after the last series in the whole continuity, Justice League Unlimited went of the air, films continue to be made for the continuity. 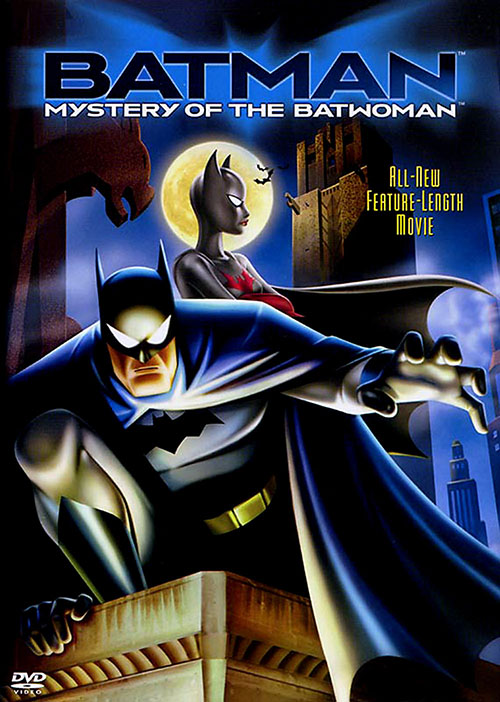 The third of these films, and the last made during the main boom of the series, is the first to come out after its own show, Batman: The Animated Series went off the air, having been replaced by the future-set Batman Beyond. Despite this, the film, Batman: Mystery of the Batwoman, remains firmly set in the "present" set continuity, ignoring any characters or developments that would come from the later series. It introduces a new Bat-heroine, brings back all the old actors, and continues to evolve Gotham... kind of. The biggest knock against the film (of a few different issues I had) is simply that there's nowhere for this movie to go from here, lacking a series to anchor it and to continue to develop its plot threads. It's a story that seems to promise more but has nowhere to go in the end.

In the film, BatmanOne of the longest running, consistently in-print superheroes ever (matched only by Superman and Wonder Woman), Batman has been a force in entertainment for nearly as long as there's been an entertainment industry. It only makes sense, then that he is also the most regularly adapted, and consistently successful, superhero to grace the Silver Screen. and Robin III (we don't talk about Robin II) are on patrol when they catch a glimpse of a new vigilante in town: the Batwoman. She'd already hit a couple of major crimes in action, causing much wide-spread destruction as she worked to take the goons down (by any means necessary). This is something the Batman simply can't abide (especially as she's dressing up as if she's on the the "Bat-family"), so he has to work to figure out who she is and stop her.

There are a few candidates he finds, from Kathy Duquesne (Kimberly Brooks), the rich socialite and daughter of a crime boss, to the tech-genius Dr. Roxanne Ballantine (Kelly Ripa), and the new on the force Detective Sonia Alcana (Elisa Gabrielli), any one of whom could be the one behind the Batwoman (Kyra Sedgwick provides the voice of the masked heroine). Whoever it is they have it out for the Penguin (David Ogden Stiers) and the men working for him. Under pressure from Batwoman, these criminals start getting desperate and all of Gotham could be in danger from their violence until Batman and put an end to all of this.

If some of this story feels familiar, it should. The idea of a new vigilante coming into Gotham, stalking a main foe of Batman, and having Batman have to search among the people he's just met to find the likely killer is a story we've already seen before: two movies ago in the main continuity with Batman: Mask of the Phantasm. If you've already seen that film then many of the beats will feel all too familiar, giving this film the feel of a retread of what's already come before. 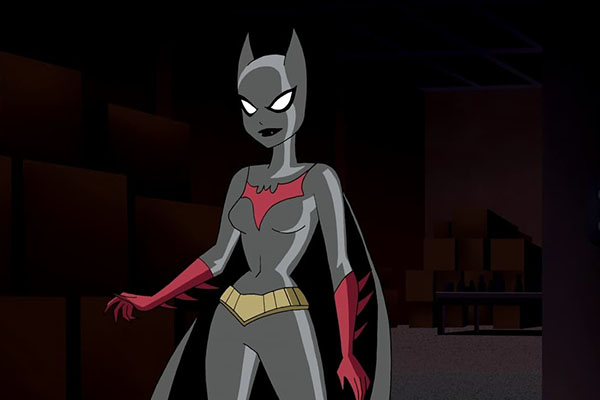 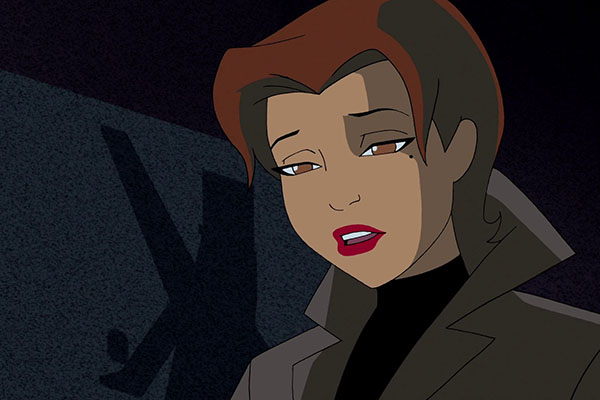 It's not just the basics of the vigilante story but also Batman's personal life in the process that get retread. You'll remember that in Mask of the Phantasm a love from Batman's past life comes back, only to eventually be revealed as the new vigilante. That same thing happens here, except its a new girl that wander into his life, Ms. Duquesne, and, yes, she's the Batwoman. Well, one of them; the one trick this film performs that I did like is having three woman share duties as Batwoman, in part to throw the hero off their scent (which does work, for about five minutes). But still, having the love story tie into the main story still feels like a retread.

Can't Bruce Wayne fall in love with someone, have a strong connection with them and get character development, without them then having to be a supervillain (or, at the very least, a vigilante). It's like Bruce can't help but fall in love with people that Batman will eventually have to fight. It worked once, in the previous film, but here the coincidence of it stretches credulity just a little too much. Again, I liked that they had more than one woman under the hood here, but that just means that all three new female characters introduced in this film are all the villain, in a way. That is in no way a good way to tell a story.

One note of irritation I had for the film isn't the fault of the creators, though. It was weird to me that Batwoman here had no connection to Kate Kane, the character that's had the heroine's mantle since 2006. This film came out three years earlier, and before that the closest version of Kate we'd had was Kathy Kane from the Golden Age. Kathy Duquesne is a fine update of her character, and it works within the bounds of this story, but the whole plot line here didn't age that well because of later DC reinventions of the character. I doubt an out-and-proud lesbian version of the character would have flown back in 2003 (not for a film based on a "kids" movie, as shitty as that is), but I would have liked to have seen that version here, in some capacity. The timing just didn't line up.

Still, I struggled to get invested in this film, whichever versions of the characters we had. I immediately pegged the details of the story, figuring out there were three Batwomen before Batman did all because I'd seen his previous adventure and put two-and-two together... which, really, Batman should have done as well. Alfred should have wandered into his cave, said, "Master Bruce, remember when you fought your last lover because she turned out to be the vigilante you were fighting?" It takes our heroes way too long to click on to what is going on. 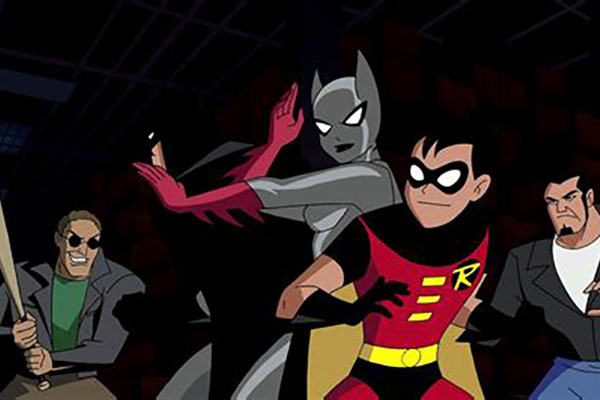 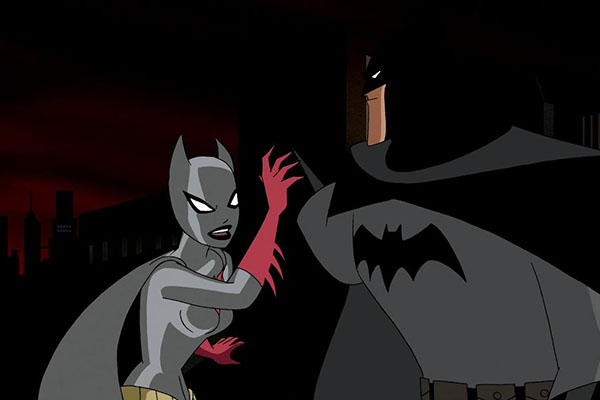 Plus, the film spends so much of its short, 74 minute run-time divided between the three Batwomen, Penguin, and the Batman that none of them really get any true fleshing out. The strength of the twist of having three women under the hood, so to speak, is also it's weakness because it stretches the entire storyline a little too thin. We want more development, more time to get to know these characters beyond a single plot point or character tick, but we never manage to get that. Penguin never feels like a threat because he's barely in the film, and the connection between Batman and the Batwoman ends up feeling rushed because the film has no time to devote to it.

The film is love to look at, and I liked the new design for Batwoman, but there's a spark to the whole production that's missing. This film was clearly made to entertain the kids that watched the cartoons, so it has to be fast and feature very little violence that might offend their sensibilities, but that leaves us with a toothless movie that never really gets the characters under control. It's no worse than the second film in this series, Batman & Mr. Freeze: SubZero, but it's hardly any better, either. I'd argue, even, that SubZero is more important to the series as it least it tied in and could influence episodes that came after. Mystery of the Batwoman, coming when it does, lacks that benefit.

It's a weird ending to a series that really didn't need it, a hanging point without it's own continuation. If this had come a little earlier, maybe it could have tied in and had a bit more impact. As it is, this is just a film made to cash in on the Batman name and without connection to the main series, or a good story for it to stand on its own, it ends up a disappointing end for all that came before. There's little reason to watch this film, especially not more than once.