One Small Step for One, One Giant Step for the Man of Steel

Although the the most famous team-up in the line of DC ComicsOne of the two biggest comic publishing companies in the world (and, depending on what big events are going on, the number one company), DC Comics is the home of Superman, Batman, Wonder Woman, and just about every big superhero introduced in the 1930s and 1940s. finally made it into theaters with the 2017 Justice League, they've had much better success on the smaller screen, between the 1970s Super Friends, the 2000s Justice League and Justice League Unlimited, and a ton of direct-to-video films. 2017's film might have been the first time the Justice LeagueThe premiere team at DC Comics, their version of the Avengers (which actually came before the Avengers and, really, has existed in some fomr since the early 1940s), the Justice League is the team-up to end all team-ups, featuring some of the most popular, and longest running, characters in all of comics history (and also Booster Gold). was in theaters but fans had seen a lot from them over the years. 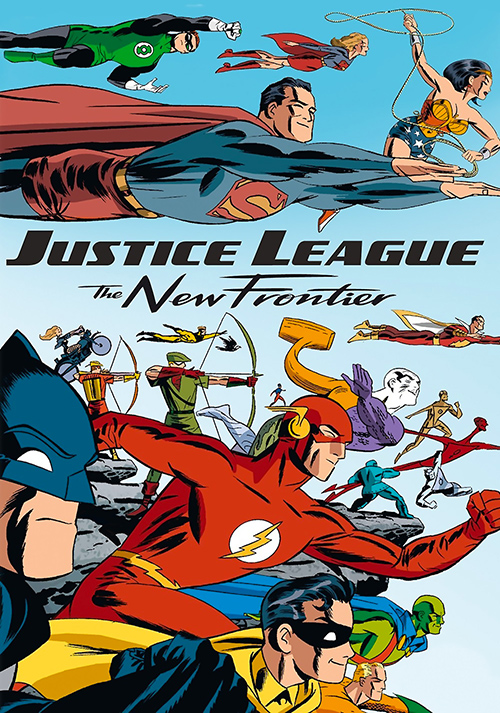 In 2008, we received a somewhat different adventure from the usual, modern-set productions of previous years. Set in the mid-1950s, after the Korean War, this movie takes place entirely in that era, depicting older-era versions of all the heroes in the DC stable. The film is based on the 2004 limited series DC: The New Frontier by Darwyn Cooke and it does a decent job of translating that writer/artist's unique style to the screen. That said, it's not a perfect production a some of the whiz-bang glee (and solid writing) of Cooke's version of the story was lost in the compaction, and translation, from page to screen.

The film opens with introductions to the various heroes. Some of them, like SupermanThe first big superhero from DC Comics, Superman has survived any number of pretenders to the throne, besting not only other comic titans but even Wolrd War II to remain one of only three comics to continue publishing since the 1940s., Wonder WomanLong considered the third pillar of the DC Comics "Trinity", Wonder Woman was one of the first female superheroes ever created. Running for as long as Batman or Superman (and without breaks despite a comic downturn in the 60s that killed superhero comics for about a decade), Wondie has the honor to be one of the longest serving, and most prolific, superheroes ever., and BatmanOne of the longest running, consistently in-print superheroes ever (matched only by Superman and Wonder Woman), Batman has been a force in entertainment for nearly as long as there's been an entertainment industry. It only makes sense, then that he is also the most regularly adapted, and consistently successful, superhero to grace the Silver Screen., have already been established for a little while (which is similar to their status as the only heroes to remain in print throughout World War II and beyond), while other heroes are just starting off in the careers. We see The FlashStruck by lightning while working in his lab, Barry Allen became a speedster known as The Flash, launching an entire set of super-fast superheroes. on one of his early escapades against Captain Cold, and are then also introduced to Hal Jordan (before he finds the green ring and becomes the Green Lantern) and a curious Martian accidentally brought to earth right as the scientist that did the deed dies of a heart attack. The Martian, J'onn J'onzz, studies humanity and uses his shape shifting powers to be come a detective, John Jones, all before eventually taking up the mantle of Martian Manhunter.

Each of these heroes has a case or encounter that all seems to be orchestrated by some higher, psychic power: The Center. None of them are sure what The Center might be, but as these heroes meet each other and start pooling resources, it becomes clearly that the threat from this new enemies is more than any one of them can take. It will require all of these heroes coming together, along side many other heroes and government-authorized agents, all to take on the true source of The Center and defeat it before all humanity is lost.

Justice League: The New Frontier is, honestly, a bit of a disappointment, all things considered. There's a lot the film gets right in the early going, as each character is introduced, but once the film actually has to focus on the plot everything starts to run aground. This is certainly an issue with trying to compress a six-issue series into a single, 75 minute film, which leads me to think the film should have been made longer, letting the runtime of the movie suit the story and not the other way around. 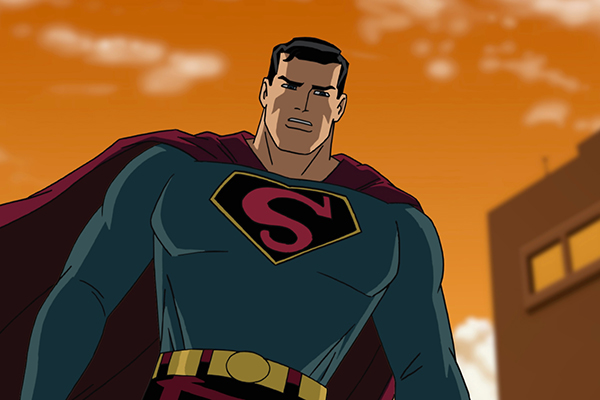 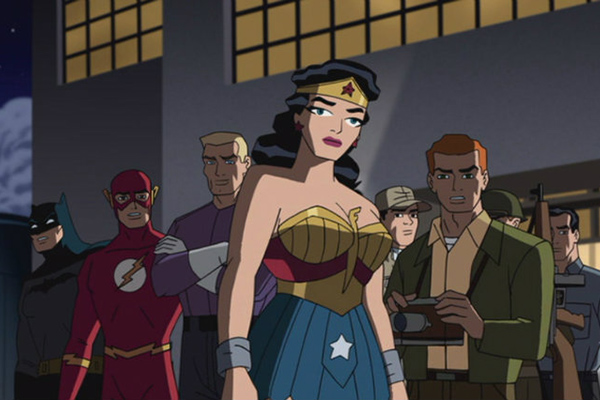 The first half of the film is certainly much better than the back half. The introductions to the heroes, especially Barry Allen / The Flash (Neil Patrick Harris), Hal Jordan (David Boreanaz), and J'onn J'onzz / Martian Manhunter (Miguel Ferrer), are great. I really appreciated that the film gave time to three three specifically, letting them become the focus of the film while Superman (Kyle MacLachlan), Wonder Woman (Lucy Lawless), and Batman (Jeremy Sisto) take supporting roles. We have plenty of films and shows focused on the big three of DC's "Trinity", so letting these other guys from the Justice League share the spotlight helped give this film a different energy.

The 1950s setting for the era also does wonders for the story. Everything gets this retro vibe to it which allows the first half of the story to fly with a good vibe. It's breezy and fun, even as the movie works in some darker moments and a little social commentary. It also allows the producers to enjoy throwing in technology, artwork, and costumes with a kind of retro-futuristic vibe, like looking at the heroes through the lens of a sci-fi film made back in the 1950s. The aesthetics of the film really help the setting and story, creating an overall great vibe to the film.

The issues crop up with the villain, an undefined entity called "The Center" who has vague motives and unknown intentions. The best the film can define for The Center is that it's some ancient entity that hates humanity and wants to kill everyone. That, on it's own, is fine, but we never really get a sense of who the center is. What we see, eventually, is a giant space-ship looking creature that spews out, of all things, dinosaurs. It's, frankly, ridiculous and really doesn't seem like a big threat, not on the grand scale the movie makes it out to be, and instance of "telling instead of showing" that backfires royally in the end.

Thing is, I remember the villain being much more interesting, and more of an actual threat, in the book the film is based on. Clearly something was lost in the translation here, and it's not just in the villain and the ending. Cooke generally has a bouncy retro vibe to his work, and that was present in the comic book form of this story. Here, though, the production is a bit darker, the characters act a little more distrustful. Everything has a nastier vibe, especially in the back half of the film, that makes it seem less like a Darwyn Cooke adaptation and more of your standard "dark and gritty" DC film (this despite the retro-futuristic setting). 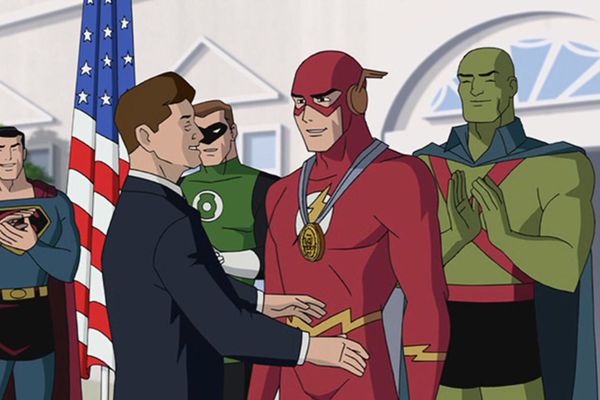 And that doesn't even get into issues with the structure of the end of the film. Presumably due to time constraints, everything from the last couple of issues had to get resolved very quickly. Characters go from hating each other to suddenly being the best of friends, old grievances are immediately dropped, and everything suddenly is toeing the party line of "American Exceptionalism" even when it doesn't suit their character from just a couple of scenes ago. It hurts the end of the film for everything to get glossed over simply because a bigger threat comes along; that's not how human works as they can be hateful in multiple directions at once.

Plus, then the film borrows a JFK speech, using the President's own audio played over top of a montage to evoke feelings of patriotism and heroism. It's all laid over a montage of the heroes coming together after the battle with the The Center, becoming the Justice League as they take on a flurry of new threats. It's not earned though, and this whole ending reeks of simply trying to cram in as much as was possible from the comics as quickly as possible while glossing over it with better writing than the team could muster (i.e., the JFK speech). The end, frankly, sucks.

It's just a huge disappointment because, seriously, the first half of the film is great. The back half could have treated the characters as well, could have had that same sense of pace and style, this film could have been a winner. But like the later, 2017 film also bearing the Justice League name, this one ends up falling apart right when it needed to get good. Such a waste of a great story and an even better setup.