Hey Now, You're an All Star

It's not easy crafting a tale about SupermanThe first big superhero from DC Comics, Superman has survived any number of pretenders to the throne, besting not only other comic titans but even Wolrd War II to remain one of only three comics to continue publishing since the 1940s. that actually feels worthy of the character (and the viewers, for that matter). Superman is so powerful -- the invincible golden god of the DC ComicsOne of the two biggest comic publishing companies in the world (and, depending on what big events are going on, the number one company), DC Comics is the home of Superman, Batman, Wonder Woman, and just about every big superhero introduced in the 1930s and 1940s. universe -- that it can be hard to come up with a story that isn't beneath the character. When you have a guy that can survive every danger, punch his way through any problem, what kind of story can you give the guy that represents an actual challenge? And once he's defeated that, how much more powerful does the next problem have to be? 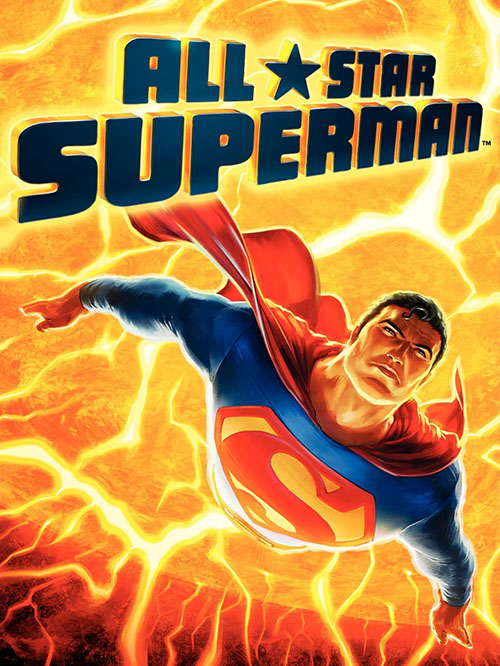 Some films and shows have managed that tight balancing act, and I think the currently run on Superman & Lois over in the ArrowverseWhen it was announced that the CW was creating a show based on the Green Arrow, people laughed. The CW? Really? Was it going to be teen-oriented like everything else on the network and be called "Arrow High"? And yet that one show, Arrow has spawned three spin-offs, various related shows and given DC a successful shared universe, the Arrowverse on TV and streaming. does a good job, probably better than a lot. That show keep Clark grounded by focusing on his family. Yes, he is having to battle faux-Kryptonians in the first season, but he's also dealing with two teenage boys, life's tribulations, and all the problems that come with uprooting a family and moving to a small town. And through it all Clark still manages to keep the optimism and wonder that are a part of his character. He's a boy scout but that isn't a bad thing. Someone had to stand up and be a ray of sunshine.

That's part of the charm of Superman (and something the DC Extended UniverseStarted as DC Comics' answer to the MCU, the early films in the franchise stumbled out of the gates, often mired in grim-dark storytelling and the rushed need to get this franchise started. Eventually, though, the films began to even out, becoming better as they went along. Still, this franchise has a long way to go before it's true completion for Marvel's universe. didn't really get): he's a symbol as much as he is a hero. You have to be able to play with all that Superman is -- powerful hero, super-intellect, symbol of hope -- and bring that altogether without losing the fact that he is that beacon of light. He's not BatmanOne of the longest running, consistently in-print superheroes ever (matched only by Superman and Wonder Woman), Batman has been a force in entertainment for nearly as long as there's been an entertainment industry. It only makes sense, then that he is also the most regularly adapted, and consistently successful, superhero to grace the Silver Screen., who lives in the darkness and works off fear, nor is he a trained warrior ready to kill like Wonder WomanLong considered the third pillar of the DC Comics "Trinity", Wonder Woman was one of the first female superheroes ever created. Running for as long as Batman or Superman (and without breaks despite a comic downturn in the 60s that killed superhero comics for about a decade), Wondie has the honor to be one of the longest serving, and most prolific, superheroes ever.. Clark came to this Earth as a baby and was raised to exemplify and that's right and good in the world. If you lose sight of that you lose what makes him Superman.

2011's All-Star Superman, one of DC's many direct-to-video animated films, understands that perfectly. Based on the limited comic series by Grant Morrison and Frank Quitely, the film goes deep on the lore of Superman, giving us an episodic tale about Big Blue that feels like a homage to Golden and Silver Age adventures the hero used to have. It's all in service of a story that shows off the best of Superman: the selflessness, the goodness, the honor. This is Superman done absolutely perfectly, perhaps the best on screen version of the hero yet.

The film opens with an adventure that only Superman can solve: the Earth's first manned mission to the sun (for observation near the star) goes horribly wrong when one of the astronauts goes mad, turns into a monster, and threatens the whole mission. Superman, naturally, shows up and battles the beast, eventually casting the monster into the Sun. In the process, though, Supes is hit by a blast of the Sun's plasma. This has the effect of bathing him in more pure Sun than he's ever had before, shoving his powers into overdrive. 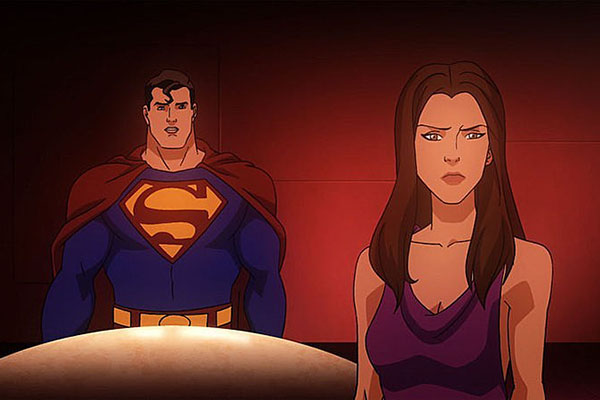 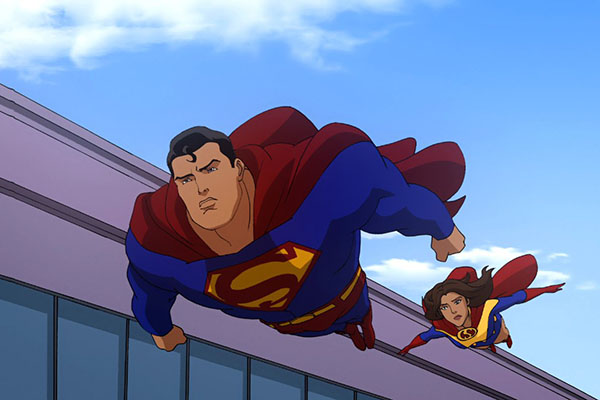 Suddenly Superman finds he's thousands of times stronger than he was before, thousands of time smarter. He can do just about anything, think through a million problems, tackle any issue. Well, except for one: the pure sun energy has made him more powerful, but his cells can't bear to contain all the energy and, slowly, are dying. At a certain point his powers will fade and he'll die, and wouldn't you know it, Lex Luthor (who managed to put the monster on the space mission) knew this would happen. Lex is on Death Row for his crimes but, before he went he wanted to make sure he took Superman with him. Now Superman only has so much time to right all the wrongs he can and, finally, tell Lois who he is and just how he feels about her.

The film isn't a love triangle, but there is a triumvirate at the center of the film, with Superman's relationships with both Lois and Lex forming the core of it. With Lois we get to explore all the best of Superman: his goodness, his power, his love. We see him take her on a tour of the Fortress of Solitude and she can see all the weird things he's collected over the years, from his army of super-robots to the animals he's saved over the years (including a baby sun eater) and all the advanced technology he's built during his time on Earth. It's all very goofy and is meant to evoke the Silver Age adventures the superhero had in the comics, but it works because through it all Superman joyous about his collection. He's proud of the work he's done and the things he's accomplished and he just wanted to share it with Lois.

And then he bestows his powers on Lois for a single day (via a serum) and they get to have a fun date together. They fight more villains, had more dorky adventures, and generally just get to bask in how strange and wild the DC universe can be. It's great because here the film shows off his heroics, what he does to save the world and how he's always working to try and mitigate risk to those around him while battling threats only the Man of Steel can handle (this is contrasted by pitting Superman against two "heroic" equals, Samson and Atlas and showing how little regard they have for the safety of others).

Then there's Lex, and his constant war with Superman is used to illustrate a different side of Superman's goodness. Lex is always coming for Big Blue, always attacking him, always trying to twist the knife just a little further. A different hero would view Lex as someone that had to be stopped no matter what, that the world would be better off if the villain no longer existed. Clark, though, isn't happy that Lex is in prison awaiting his execution. For Superman this is a tragedy because, in the end, if Lex could have just focused on doing all the grand things he says he could do, fixing the world and making everything better, it could have been a paradise. Lex, though, is all ego and never thought to use his intellect for good; he just hated Superman and had to get rid of the hero so he could bathe in glory once more. 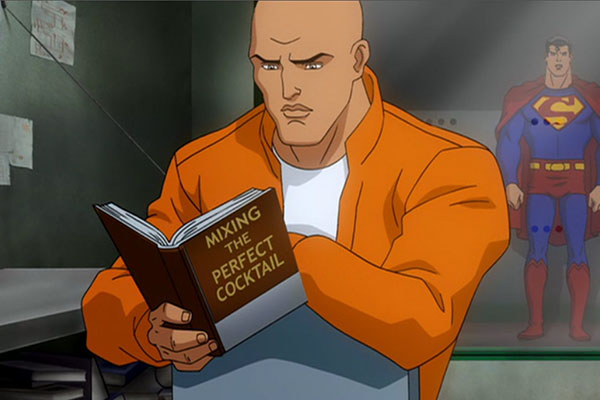 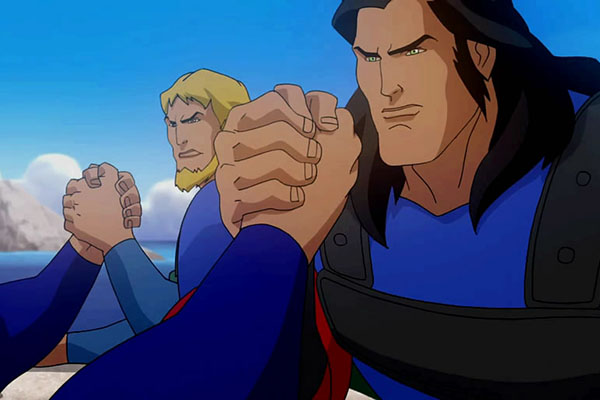 I think this is something that a lot of comics and shows fail to get about Superman. He might not like Lex Luthor but he respects the man's intellect and, as with all life on Earth, views Lex's life as sacred. No one dies on Superman's watch, not if he can help it. Superman doesn't want Lex to stop being smart, he wouldn't even mind it if Lex were something of a rival. But Lex can't bear to have Superman around, and that's where the trouble lies. Superman wants Lex to be his best self, Lex wants to be the only one like him on the planet, so suddenly a force that could change the world just makes it worse... and yet Superman still has hope.

That's the prevailing statement this film makes: hope. Superman is a symbol of goodness, of justice, but most of all of hope. Through all his weird adventures, all the things he's done and all the weird tech he's created, it's all be for caring, for compassion, and for hope. Superman is the ideal we all should strive for, and in All-Star Superman he presents a world, through his eyes, we all would want to strive for. Plus, it's a rollicking, fun adventure that never stops playing up all the strange bits of the DC Universe. It's just a fun time, start to finish, with an ending that might just pull at your heart a little. Let's see the DCEU do all that.