The Newest New Superman to Ever New

I read comics pretty regularly, but my comic devouring habits are probably different from most comic book nerds (I do group myself with the comic nerds, so that's not a disparaging term in this instance). While I know plenty of people that buy their monthly (sometimes weekly) titles to keep up with the characters they like, I prefer to wait for the trade paperbacks. I'm not into comics as a kind of monetary investment -- the speculative comic market crashed decades ago at this point and Marvel and DC have both done their part to keep it buried. I want the comic stories and I want the books I pay out the nose for to look nice on my shelf. If I'm gonna spend a lot of money on cape and cowl stories, I want to be able to display them nicely. 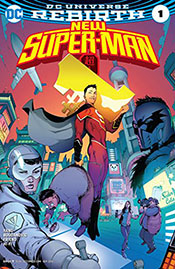 Waiting for the trades has another benefit: I can see what stories people are actually talking about, which ones have gotten good, and if I'm not already on-board with those titles I can easily jump on. It's a waiting game that usually pays off preventing me from spending cash on storylines that don't go anywhere or titles written into the ground by hack authors.

The downside of waiting for trades, though, means that I'm usually behind on a number of stories. Not only do I have to wait for the comics to all get published but then I have to wait for the publishers to actually put out the trade. In the case of DC, I've waitied up to a year to read a big arc because they dragged their feet getting the trade out to stores. And then, naturally, there's a glut when a bunch of books come out all at once, and it sometimes takes me a while to get through all the books as I pick-and-choose my way through my "to read" pile.

All that is explanation for why I'm only now getting around to talking about New Super-Man, one of new heroes launched during DC's "Rebirth" initiative. It's curious, really, because for a short while there we essentially had three Supermen what with the post-New 52 Supes, the pre-New 52 "Classic" superman (of modern Earth 1 before DC screwed all that up), and then New Super-Man of China. While I don't pay too much attention to what goes on in the Superman books (both preferring my Super to have "Girl" at the end of her name and not trying to figure out the stupid reasons why we had two Supermen in the U.S.), I'd heard good things about the new New Super-Man. Thus, long after everyone else had started reading to book, I picked up the first trade, "Made in China", to give it a try.

In the story Kong Kenan (clearly going for that double "ka" noise a la Clark Kent) is just some punk teenager in Shanghai. A bit of a bully, Kenan spends his days harassing other teens and basically avoiding doing anything of value. That changes, though, when he accidentally does something heroic and becomes an internet star. Soon, the powers that be in a secret Chinese government organization are tapping him to become the "New Super-Man" (via splicing him with some of classic Superman's DNA). Thus he gains all kinds of powers but still doesn't really have the personal responsibility to use them well. He also has to contend with two team mates, New Bat-Man and New Wonder Woman, who doubt his abilities or value to the team. Kenan has to find the power within himself, and mature as a person, to become worthy of the big "S" on his chest. 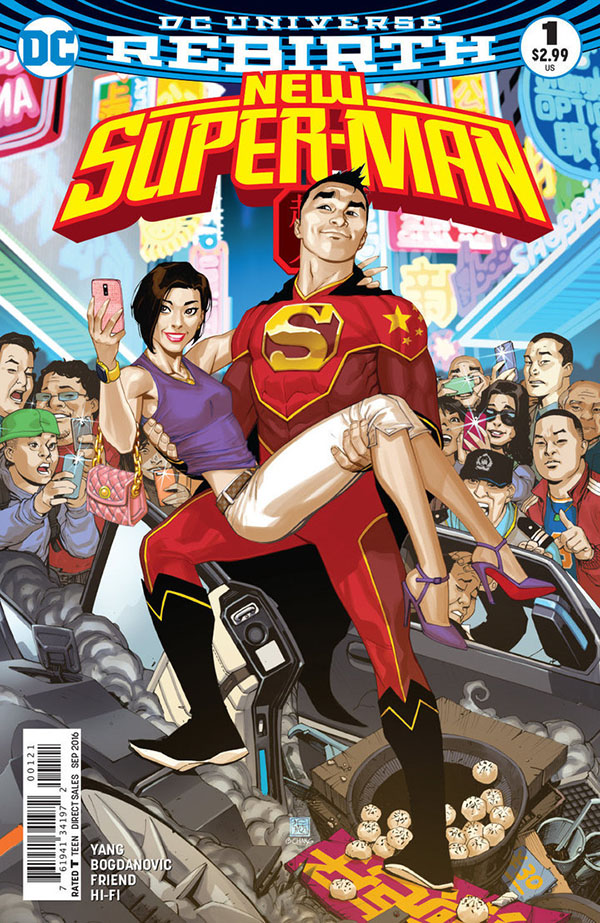 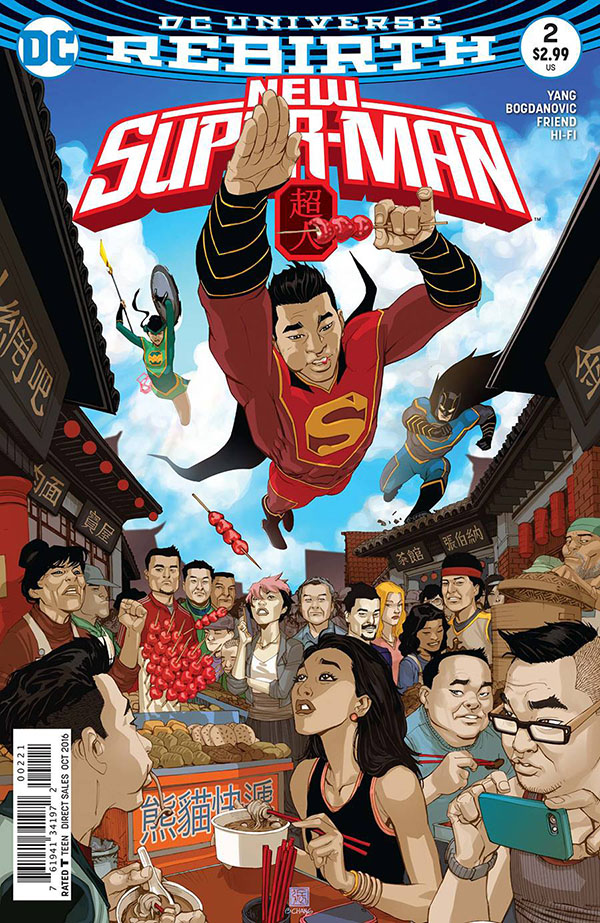 The setup for the story is one of the things I liked. The fact that this "new" Superman isn't yet another Kryptonian is a nice change of pace (having seen all number of Kryptonians land on Earth 1 and Earth 2 over the years). The genetic infusion experiment actually makes Kenan more of a "Superboy" a la the 1990s version who came out of the "Death of Superman" arc. It's a neat twist, one I dug conceptually.

I also was intrigued by the two other members of the team, New Bats and New Wondie. Bats is an overweight techy guy who uses his brains, but not brawn, to save the day. Meanwhile Wondie is clearly not an Amazonian (and there's no explanation as to how she gained her powers), but she still has that Wonder Woman power, that steely resolve, that I really like. Over time she grows as a character despite Kenan.

That is one of the big problems with the first trade -- Kenan is just a big old waste of space. This book is supposed to be his title, but the other two heroes do more of the actual "hero" work and are, just over-all, better, more interesting characters. I kept wishing for Kenan to get killed off, or be permanently depowered, or anything just so that we didn't have to keep reading about him. Sadly that's not the case.

There's also a weird tone to the book when it comes to politics. This is a book that, I assume, was made to cater to Chinese audiences as well as American. I'm all for that as it's good to get different perspectives and new readership. What I found odd was the relationship between the government entity behind the Justice League of China (New Supes, New Bats, and New Wondie) and the rest of the Chinese government. The comic wants to have its cake and eat it to, making a villain of a Chinese governmental wing and yet nave it clearly not be under the auspice of the Chinese government, a shady cell working off the books. It's like the author wanted to make the Chinese government the bad guys but knew if they did that the book would never get released in China (as the government would censor it), so they half-assed a solution. "The government is bad, but only this one little part, honest." 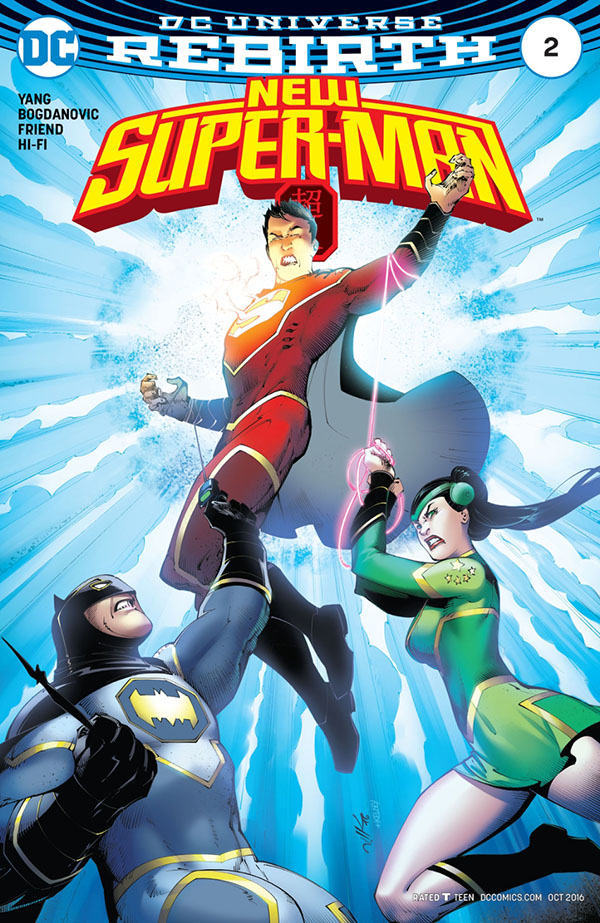 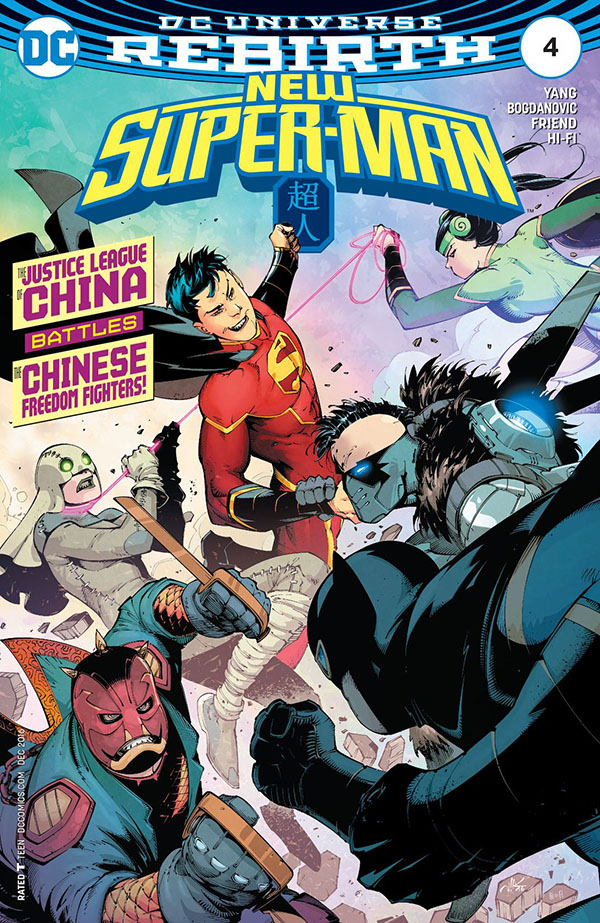 This same dissonance comes into play with the villains of the piece, the Freedom Fighters of China. These guys are working against the Justice League of China and, of course, the government, but they also think they're the heroes of the piece. Eventually we're even supposed to see them as heroes as JLC eventually teams up with them. Again, clearly the author had a specific vision in mind that bumped into what could actually play in Chinese media and had to compromise to make the story work.

It all leads to a vision that doesn't really gel together. Maybe the story picks up and all the weird details work themselves out. Maybe what I'm seeing as confusion of the plot (and the characters) is part of a larger plan. What I know is that after reading the first six issues in compiled into the first trade, I wasn't hooked. The story just didn't work for me and that, combined with a main character that I really just hated, means that I'm not likely to pick up another New Super-Man book, at least not any time soon.