This Will Drive the Conservatives Crazy

Recently DC ComicsOne of the two biggest comic publishing companies in the world (and, depending on what big events are going on, the number one company), DC Comics is the home of Superman, Batman, Wonder Woman, and just about every big superhero introduced in the 1930s and 1940s. announced that SupermanThe first big superhero from DC Comics, Superman has survived any number of pretenders to the throne, besting not only other comic titans but even Wolrd War II to remain one of only three comics to continue publishing since the 1940s. would be getting a slightly different motto from the one everyone knows. Instead of fighting for "Truth, Justice, and the American Way," he'd now be applying his skills towards "Truth, Justice, and a Better Tomorrow". While there are many that feel like this is a better, more applicable way to say the thing Superman has always been about -- he's a beacon of hope, the "best of us" because he has to be -- there will, of course, be a contingent that hate the idea that the ideas Superman is fighting for aren't "American". "What's wrong with having him fight for the good things that American's appreciate?" 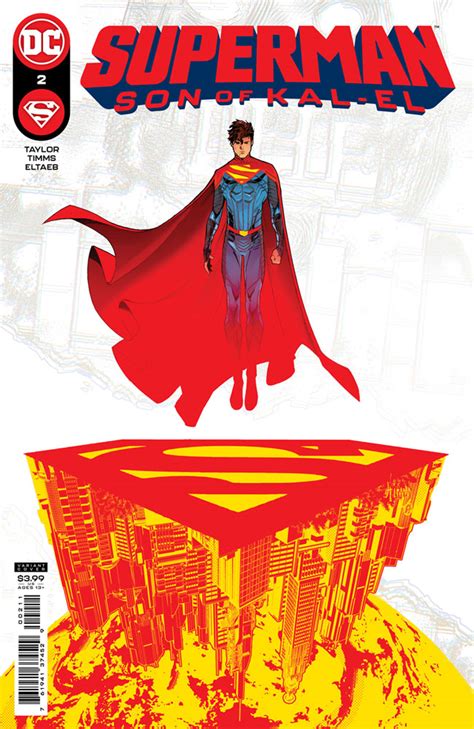 To get into that we, of course, need to apply some context to all of this. This change does come as part of a larger of a larger evolution for Superman in the comics. The Superman we know, Clark Kent (aka Kal El), is off in space dealing with matters beyond the Earth in current comic continuity so his mantle of "Superman" was passed to his son, Jon Kent (who originally appeared as Superboy), who now stays as the defender of Earth. He's more headstrong than his father, a bit more of Lois's personality in the boy, and he's also a lot more overtly liberal than dear old pa.

Superman is a beacon of hope but there are those that do feel like he's stodgy, a reflection of the time he came from (dating all the way back to 1939, but the version of Superman we think of really coalesced in the 1950s). The whole "Truth, Justice, and the American Way" shtick was a part of the radio shows and TV series from the 1940s and 1950s, and that become a defining trait. For all of his love of the world, Superman does have a certain "Americana" quality to him. He might seem a little stodgy, heck maybe even a touch jingoistic (although that's more perception from comics past and less a feature of the character anymore). By moving Clark out into the stars and making his son the new Superman it gives DC a chance to reset the character and find new stories to tell about Superman. It also lets them make him a global figure, and a more liberal one, than his dad ever could be.

The world is a very different place now than it was when Superman was first conceived, or during World War II, or when he came back into relevance in the Silver Age of Comics. Superman, despite having that "American Way" attached to his motto, is a global icon and a beacon of hope to more than just America. Just from a business standpoint having Superman have "the American Way" attached to him probably turned off a number of people that might otherwise have appreciated the character. And that doesn't even begin to get into issues with China and whether or not they were happy to have an icon like that with that phrase coming out in Chinese media. Propaganda is fine in China so long as it's Chinese government controlled propaganda (hell, they even got their own Superman, New Super-Man, a few years back).

There is, also, a troubling political undercurrent to saying someone stands for the "American Way" at this point. Does that mean Superman endorses drone strikes, or toppling regimes, or any of the other bad things that American has gotten up to in the last 80 years ostensibly under his watch. Back when he was created, the whole "Truth, Justice, and the American Way" saying wasn't part of his comics, but because it became popular due to the radio and TV serials, DC now has to address it. Superman wouldn't appreciate all the actions of the American government (as highlighted in Injustice) and even if he has a code of noninterference it would still seem weird for Superman to tacitly endorse those actions. 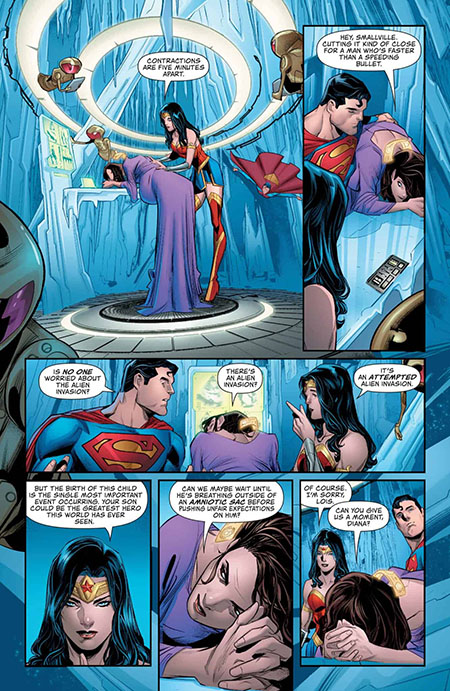 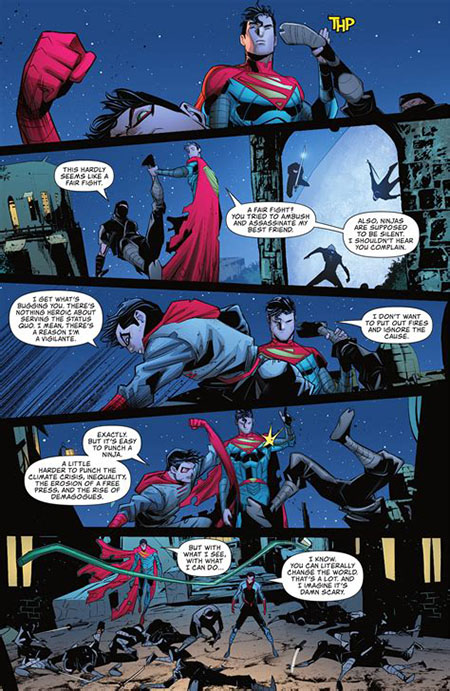 It's interesting, in fact, to see this evolution for the character and his phrase. You can see DC slowly distancing themselves from the "American Way" even before this announcement was made. If you watched Superman & Lois then you saw the flashback to Superman's first interview with Lois and he said, "I fight for truth, justice-" and she cuts in with the, "and the American Way?" to which he only smiles and brushes it off. DC knew what they were doing, even then.

His son, naturally, isn't tied to past comics history. Because of that, Superman can now shake off the old motto and reinvent it to something that works on a global stage. He doesn't endorse any one nation or their actions, instead acting as that beacon of hope for a "Better Tomorrow". It still feels like he wants the things Superman has always stood for but now he can do it without having to ascribe to any one government, any one set of actions. It's uplifting, really, as it shows that this Superman realizes the baggage that comes with "the American Way" and is distancing himself from it.

Naturally, conservatives in the media were upset with this change. They feel that Superman is a strictly American icon and, naturally, the American way is the right way. Someone like Superman, a red blooded American, would know what "the American Way" mean. This, despite the fact that Clark Kent was an illegal immigrant from an alien world (even if he was legally adopted eventually all that paperwork would be fake). Superman has to be more than one nation, had to be more than just one set of ideals. He had to be that beacon in the sky.

Of course, Jon is his own man, and he has his own things going on that will piss off conservatives. It just recently came out that Jon, well, came out. He's at the very least bi, dating a boy, and they've already shared their first kiss in the pages of Superman: Son of Kal-El. Naturally much fuss was made about this, on both sides, with the right wing media screaming that, "Superman can't be gay." Clark isn't, but his son can do what he wants. He's a powerful half-Kryptonian. You try telling him who he can date. 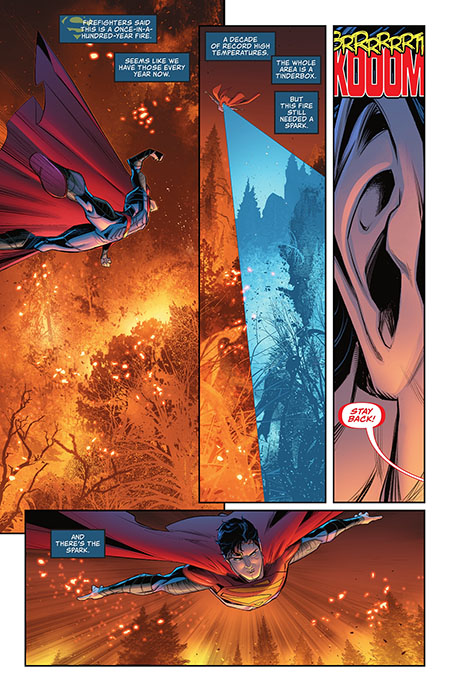 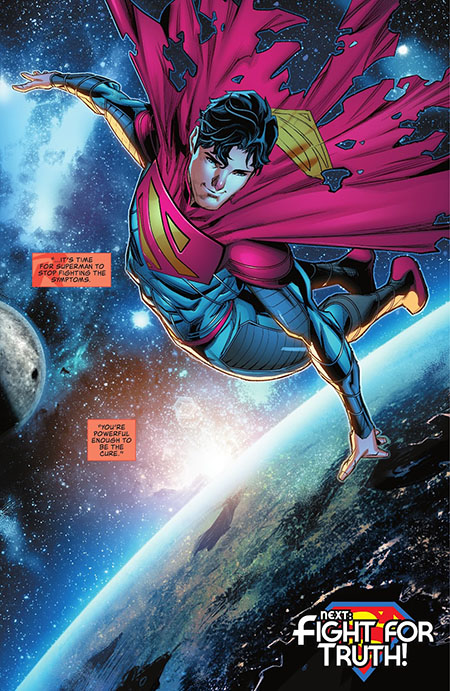 Maybe all these changes are just corporate in nature. It could be that "a Better Tomorrow" tested better than "the American Way" and that's why DC made the change. I'm sure there will be some comics fans that will tear at their hair shirts and gnash their teeth over this change, just like they'll be angry that Jon is kissing a boy. But there will be others that will see these changes are a positive step. There will be some gay people that could see themselves in Jon and will be more interested in the comics. Hopefully these changes, and the hope they bring, will goose sales enough that DC keeps them around.

But then we know how much DC loves to reboot its continuity. If sales take a hit it's possible Superman: Son of Kal-El gets the axe and then Jon suddenly realizes he just loves them ladies. It could be that three years from now we have Superman (Clark) back on Earth, waving the Stars and Stripes while drinking a beer, talking about how he's a good old boy through and through. That would be sad if that's what happens, but considering these changes I somehow doubt DC is going to capitulate to the whining of a select few angry MRA readers. Let's hope this change is here to say as, frankly, it's better for the character of Superman. It makes him more solidly in the beacon of hop he should be for everyone.