Is the World Ready for the Man of Steel?

When last we checked in with an animated version of SupermanThe first big superhero from DC Comics, Superman has survived any number of pretenders to the throne, besting not only other comic titans but even Wolrd War II to remain one of only three comics to continue publishing since the 1940s. it was at the end of the DC Animated Movie UniverseWhile DC Comics was amping up production on this big "MCU-killer", the DC Extended Universe they were also quietly putting together another shared movie continuity, the DC Animated Movie Universe. This series was more closely related to the comics, directly adapting a number of famous storylines to, arguably, better effect than the live-action movies could. as all of the world was destroyed in Justice League Dark: Apokolips War. The question many of us had was where exactly would DC ComicsOne of the two biggest comic publishing companies in the world (and, depending on what big events are going on, the number one company), DC Comics is the home of Superman, Batman, Wonder Woman, and just about every big superhero introduced in the 1930s and 1940s. go with their animated properties after this? 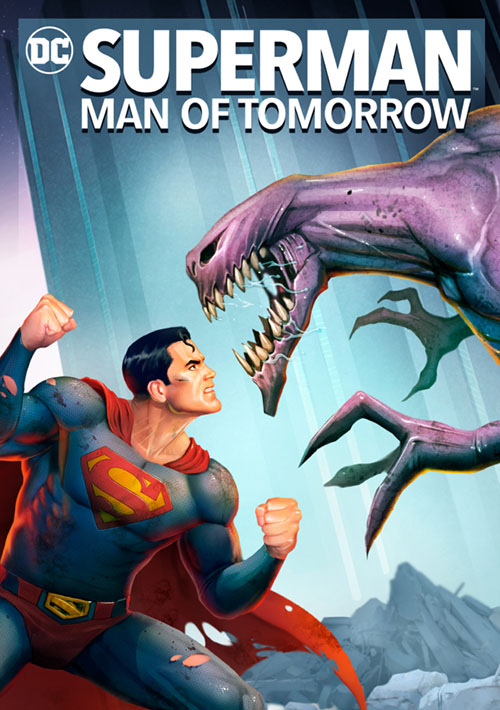 Now, a few months later, we have our answer: back to the beginning apparently. Superman: Man of Tomorrow marks a literal new beginning for the Man of Steel as we venture all the back to when he first started his career as Superman, back before he even had that designation. This is a version of Clark Kent (voiced by Darren Criss) who is still figuring out what it takes to be a hero, how he wants to handle doing the right thing and balance that against keeping himself, and those he holds dear, safe. Its a new perspective on the character, one that seems to blend some elements from other versions of the character, while charting a fresh path forward.

Normally I'd recap the story for the film here, but honestly we all already know Superman's origin story: crashed as a baby in Kansas, raised by John (Neil Flynn) and Martha Kent (Bellamy Young), and then eventually moves to Metropolis to work at the Daily Planet. This film gets interesting once Lobo (Ryan Hurst) shows up. Lobo, the intergalactic bounty hunter, is on Earth to capture Superman as he's the last Kryptonian and, apparently, that's worth something. But, during their confrontation, Lobo accidentally infects a human with some of his weird alien tech, and that guy, Rudy Jones (Brett Dalton), becomes parasite, the energy sucked creature that Superman eventually has to defeat.

I will admit that I wasn't initially super stoked for this film. We've seen a lot of Superman origin stories, and that was one thing I actually appreciated about the DCAMU: we didn't get Superman's origins right off the bat, the film trusted us to just know who he was after all these decades of media about him. But, for whatever reason, this time around we get yet another retelling of the basics of his story and its the same familiar beats (not like the previous Superman film we had at the start of the year, the Elseworld's tale Superman: Red Son).

However, once the film really got going, I had to admit that this movie at least had a good handle on the character. It had a light touch, keeping Superman as a symbol of hope, of justice and strength for all of us (obviously taking a page from Supergirl in the ArrowverseWhen it was announced that the CW was creating a show based on the Green Arrow, people laughed. The CW? Really? Was it going to be teen-oriented like everything else on the network and be called "Arrow High"? And yet that one show, Arrow has spawned three spin-offs, various related shows and given DC a successful shared universe, the Arrowverse on TV and streaming.). This is a disarmingly charming version of the character, one who really does think about doing the most good for the most people, and who would rather talk a villain down than have to punch them. It's a great take on the lead role. 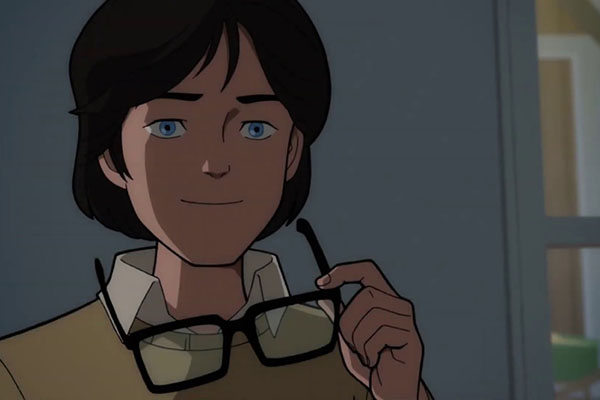 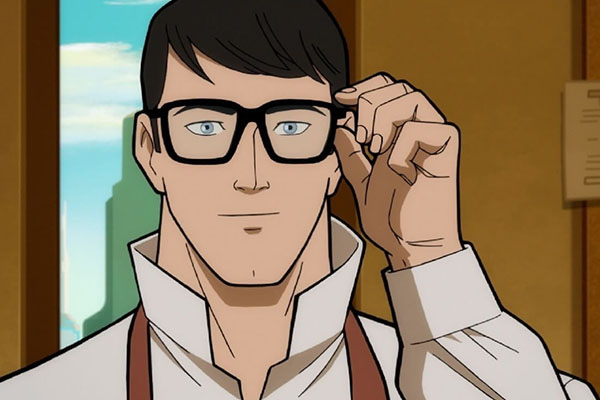 Much of the film bears that light touch. Stylistically it reminded me a lot of Superman: The Animated Series from the mid-1990s, just with that extra layer of optimism from Supergirl thrown on top. I have to bet that's part of the reason Martian Manhunter (Ike Amadi) appears in this film as a hero aiding Superman as that character also shows up over on Supergirl. Plus, having a second hero for Superman to talk to does allow for dialogue, for humor and caring and friendship. As with Superman, this is one of the best takes on J'onn J'onzz I've seen on film.

That said, not everything works about the movie. Lobo, for instance, is just irritating. This is a character that needs the right performance, backed by writers that understand the character, to really sell him properly. While I liked Hurst's voice, I didn't feel like he had the delivery, and the writers here make him too much of a cartoon, relying on his catchphrases without any substance behind them. A good Lobo to build off of would have been the version of the character from the second season of Krypton, but this version of the character doesn't have that necessary spark.

Meanwhile, Lex Luthor (Zachary Quinto) is a total bore. We already know Lex is evil, out for himself and always looking for a way to be the most powerful person in the room. While the film nails that part of the character, making him jealous of the attention Superman draws away, there's little else to this character. The film puts him in jail early on and then ignores him until near the end film when he's needed to further the plot. He's just a dues ex machina, really, the guy to cause trouble for the sake of it, but any substance the character needs to make him a charismatic force (again, I'm thinking of Lex from Supergirl is missing here.

I will credit the film, though: I really liked the animation style. It's simpler than what we were seeing in the DCAMU, cleaner in a way. I like that it differentiates its art from the DCAMU so you aren't just thinking it's a reboot of that continuity but, instead, is something meant to stand on its own feet. The art is clean, colorful, and, in a way, bright and hopeful. This isn't a film influenced at all by the DC Extended UniverseStarted as DC Comics' answer to the MCU, the early films in the franchise stumbled out of the gates, often mired in grim-dark storytelling and the rushed need to get this franchise started. Eventually, though, the films began to even out, becoming better as they went along. Still, this franchise has a long way to go before it's true completion for Marvel's universe. but drawings that reflect the optimistic side of the DC library. 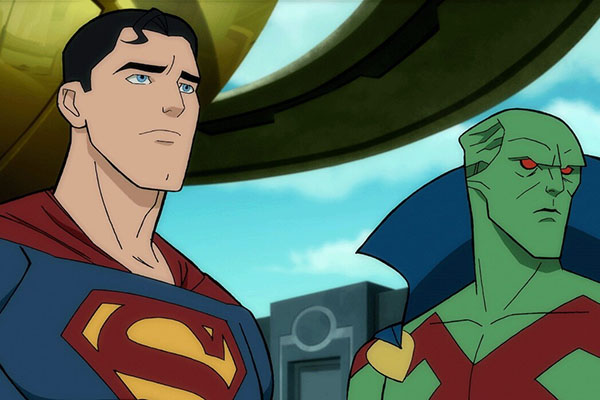 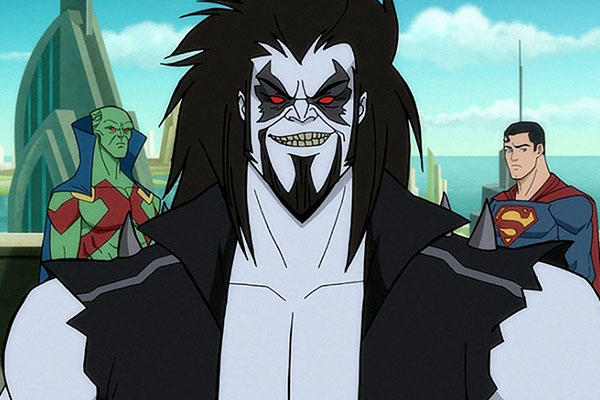 The biggest question I have about this film, though, is what is it all for? Is this supposed to be the launch of a new continuity or is this just a one-off film about Superman and then we'll move on to something else after this. DC has, as of yet, been mum on future plans, but this one film leaves me wanting more. Parasite is an interesting villain, for example, but his take down at the end of the film (spoilers) doesn't feel like the conclusion of Superman's story. This is an amuse bouche for the character, not the complete story of Superman.

If this film does lead in to some sequels, I will be there ready and waiting. This one film was pretty solid, a few quibbles aside, and I'd like to see more of this take not only with Superman but the rest of the DC stable. If this is a one-off, though, it leaves me just a little cold because I want something more. Its a decent film on its own but it begs for more adventures to come. We'll have to see if that ends up being the case, but for now if you're on the fence about this film maybe wait to see what else DC doesn't with this continuity before diving in.