A Confounding Lack of Will

I am a huge fan of the Green LanternMade up of aliens from sectors scross space, the Green Lantern Corp. defends the universe against threats with the power of the Green Light of Willpower.. All of them, from Hal Jordan to John Stewart, and even Alan Scott. I think the powers are cool, I really enjoy the sci-fi stories, and I simply love the potential for these heroes, more than just about any other, to tell any kind of story that can be imagined. I got into the comics with the Geoff Johns run, then went back and read a number of earlier stories while following Johns's run through to its ending. It's just a great series of books and it cemented Green Lanterns (and the Skittle Lanterns in general) as my favorite heroes. 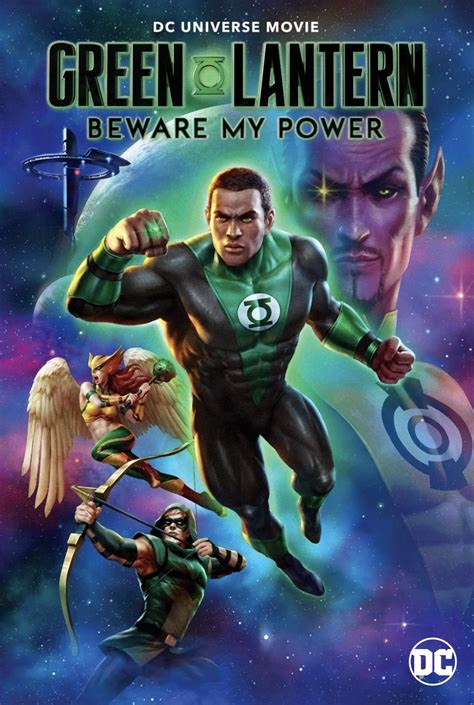 Because of DC's general inability to tell a good Green Lantern story on screen, though, I've been left waiting for the right production to come along. It should go without saying that the Ryan Reynolds Green Lantern from 2011 was not the right production. It was a massive misfire hat scrapped DC's first attempt at a shared universe of heroes, and ever since it has felt like DC has been hesitant to unleash the green light back on the screen. They produced a couple of animated films, and a short lived TV series, but nothing they've worked up has lit the world on fire. The world, it would seem, was just not ready for the Green Lanterns.

When it was announced I had hopes that Green Lantern: Beware My Power would be the film that could treat the lanterns right. Tied into the new DC Tomorrowverse, which also sported the pretty decent Superman: Man of Tomorrow and Justice Society: World War II, so one would think this film could meet the standards set by those other animated works. Unfortunately, like the other two-part film in the Tomorrowverse, Batman: The Long Halloween Part 1 and Part 2, Beware My Power is a massive, tedious misfire.

The problems start early when we're introduced to John Stewart (Aldis Hodge). Like in the comics, Stewart is a returning war vet dealing with his trauma, but then his story is mixed in with the original backstory of Kyle Rayner (Sir Not-Appearing-in-this-Film) when an alien ship crashes down with an Oan Guardian inside. The guardian, Ganthet (Jason J. Lewis), tells Stewart that he's the last hope for the universe and then hands the vet a ring before suddenly dying. The ring binds to John's hand, automatically inducting him into the Green Lantern Corps., a little detail Stewart is none to happy about (he doesn't want to serve again seems to be the whole reason).

Under the guidance of the ring, Stewart flies to the JLA Citadel up in space where the soldier is confronted by the Green Arrow (Jimmi Simpson). As the previous Green Lantern of Earth, Hal Jordan (voiced eventually by Nolan North), is Arrow's best friend, the two venture off into space to find Hal and see what happened. What they find is Oa, the home planet of the Lanterns, in ruins, and more questions than answers. They end up teaming with Shayera Hol (Jamie Grey Hyder), a Thanagarian warrior who blames the Oans for an attack on her home world by the Rann forces. The three end up traveling off together to follow the clues and see what is going on with the Rann-Thanagarian war, the Green Lanterns, and how everything ties by to Hal Jordan. 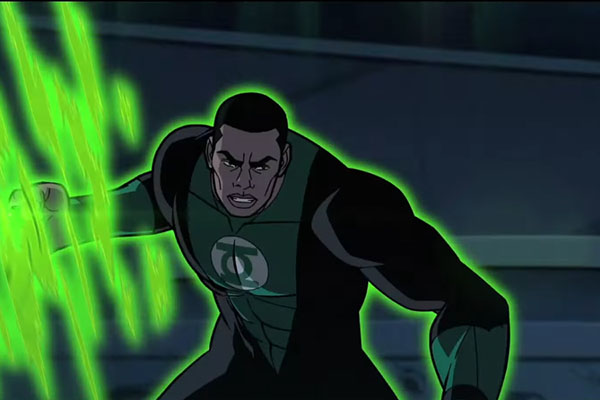 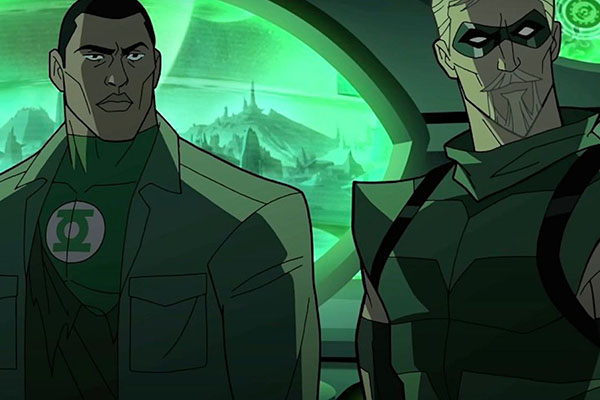 Let's be clear: the biggest issue with this movie is that it bites off way too much, too quickly, without taking time to explore anything. First and foremost, because this film takes place in the new Tomorrowverse that means we don't know any of the characters featured within this work. We've had films for SupermanThe first big superhero from DC Comics, Superman has survived any number of pretenders to the throne, besting not only other comic titans but even Wolrd War II to remain one of only three comics to continue publishing since the 1940s., The FlashStruck by lightning while working in his lab, Barry Allen became a speedster known as The Flash, launching an entire set of super-fast superheroes., and BatmanOne of the longest running, consistently in-print superheroes ever (matched only by Superman and Wonder Woman), Batman has been a force in entertainment for nearly as long as there's been an entertainment industry. It only makes sense, then that he is also the most regularly adapted, and consistently successful, superhero to grace the Silver Screen. (along with a precursor to the Justice LeagueThe premiere team at DC Comics, their version of the Avengers (which actually came before the Avengers and, really, has existed in some fomr since the early 1940s), the Justice League is the team-up to end all team-ups, featuring some of the most popular, and longest running, characters in all of comics history (and also Booster Gold)., the Justice Society), but every character in this film is new. The film acts like we should know them (and for comics fans we kind of do, at least the broad strokes), but because we don't know the versions of these characters presented here, there's a lot of characters development that should be done and, sadly, isn't.

Last we'd seen, Superman and the Flash teamed up to maybe work together at some point in the future (Batman, naturally, was off doing his thing and ignoring anything not happening in Gotham). Somehow, in the short time since then, though, the whole Justice League formed, they have a space satellite, more team members joined, Green Lantern Hal Jordan became a hero, he became best friends with Green Arrow, and now Hal is apparently lost in space and a new Green Lantern was chosen. Thats, suffice it to say, too much to just drop in the margins of a film. It feels like a movie or three's worth of story that's more or less a footnote in this film, never explored or explained. We needed that story to not only get the version of the world we're watching but also so we care about anything that's going on here.

Who is Green Arrow? Well he's voiced well by Jimmi Simpson, but outside of that all we know is he wears green and uses arrows. We never explore him as a character. Who is John Stewart? We see him punch some thugs for being dicks to a homeless man, but we never really get a sense of his struggle. Who are the Ranns, or the Thanagarians, and why have they been at war for hundreds of years? The film drops a lot of facts on us, giving us the "what" of every instance, but not the "why" or the "how". It assumes we've seen the comics and know what the film is talking about, but if the best justification is "go read the comics to know" then I can just go read the comics to see the story that inspired this work. This film, on its own, doesn't justify its own existence.

When we talk about the film doing too much, that's because it takes various storylines from the comics and mashes them all together. We get Zero Hour (and the prelude leading up to it), along with the Rann-Thanagarian War, to say nothing off the mashed-up introductions for John Stewart (which also borrows from Kyle Rayner's as well), and the formation of Sinestro's Yellow Lantern Corps. All of this, condensed into a 90 minute movie that would have felt full doing any one of those stories. Instead of investing in any story that would have mattered, it breathlessly drags us through all of these events, and more, without giving us time to understand any of it. It can't stop because, for some reason, the writers decided to tackle all of it. 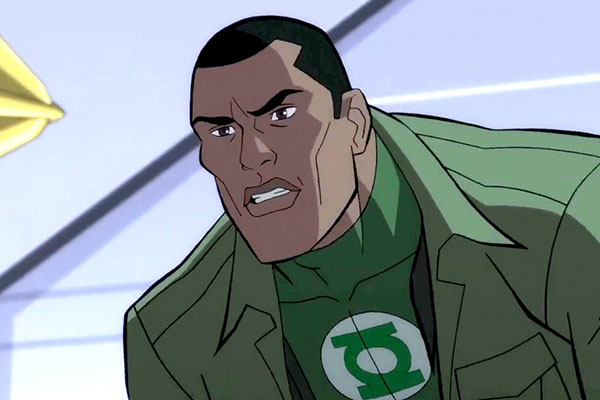 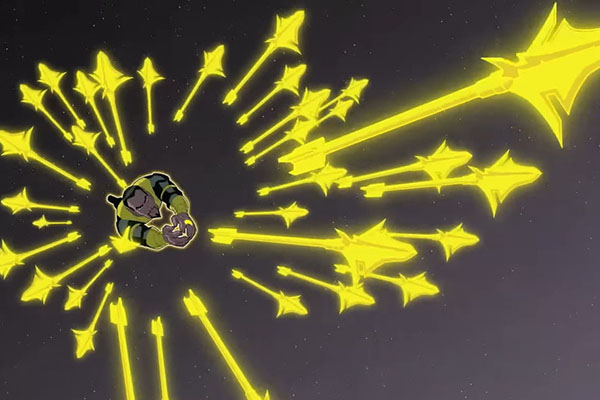 By the end of the film some villains get defeated, a war is averted, and something happens with the Green Lantern Corp. I say "something" because even that detail remains kind of vague (especially if you know your comics). The film acts like it's given us a great buddy cop comedy of Green Lantern II and Green Arrow, but nothing in the film up to that point justifies it's happy ending. None of the characters are treated right, none of the events we see matter, and it's all so pointless and stupid, start to finish.

This is, in short, a bad movie. It feels too long while only having a runtime of 75 minutes. It abuses characters we barely know, and forces its way through a ton of story, all to do... what? Launch the Green Lantern Corps... again? Nothing here makes sense in the context of the Tomorrowverse. It's 75 minutes of padding that just wastes everyone's time. If this film does anything it makes the Ryan Reynolds film look like high art in comparison.