It's Time for the Next Generation

Batman and Superman: Battle of the Super Sons

The characters of both BatmanOne of the longest running, consistently in-print superheroes ever (matched only by Superman and Wonder Woman), Batman has been a force in entertainment for nearly as long as there's been an entertainment industry. It only makes sense, then that he is also the most regularly adapted, and consistently successful, superhero to grace the Silver Screen. and SupermanThe first big superhero from DC Comics, Superman has survived any number of pretenders to the throne, besting not only other comic titans but even Wolrd War II to remain one of only three comics to continue publishing since the 1940s. have long and complex histories. Being two of only three chaarcters to survive from the Golden Age of Comics into the modern era without a break in their publishing history (the other being Wonder WomanLong considered the third pillar of the DC Comics "Trinity", Wonder Woman was one of the first female superheroes ever created. Running for as long as Batman or Superman (and without breaks despite a comic downturn in the 60s that killed superhero comics for about a decade), Wondie has the honor to be one of the longest serving, and most prolific, superheroes ever.), these two have seen a lot on their life spans (with many events rebooted away in one continuity shift or another). Batman has seen many Robins come along, with the latest being his actual son Damien Wayne, a darker and even more brooding reflection of Bruce himself. Superman, being the lighter and kinder beacon of the DC universe, has a son who reflects his own ideals, Johnathan, who also strives to be a hero in his fathers image. These two sons show the way the next generation of DC will operate, extending the legacy of these characters far into the future. 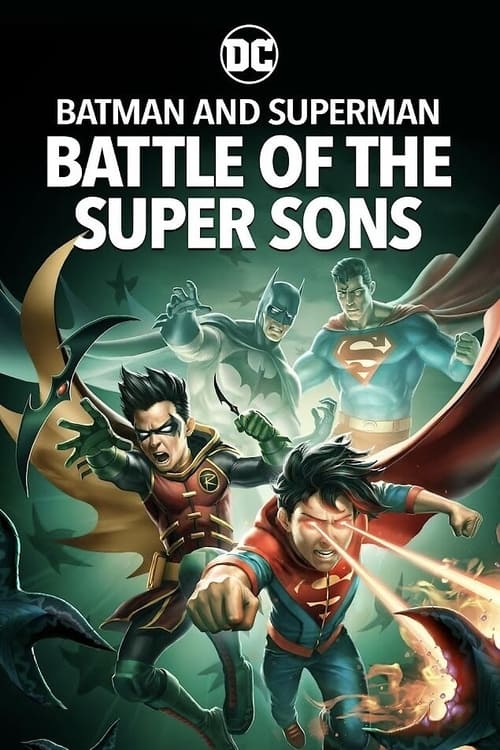 What's interesting, though, is that up until now, Johnathan Kent hasn't appeared in any of the various DC Animated Films. Sure, Damien had been a regular fixture in the DC Animated Movie UniverseWhile DC Comics was amping up production on this big "MCU-killer", the DC Extended Universe they were also quietly putting together another shared movie continuity, the DC Animated Movie Universe. This series was more closely related to the comics, directly adapting a number of famous storylines to, arguably, better effect than the live-action movies could. (starting with Son of Batman), but while mentioned once or twice in alternate continuities, Superman's son hasn't seen his own animated adventure, and that means the two "super sons" weren't able to team up, either. That changed with the release of Batman and Superman: Battle of the Super Sons, a movie that really isn't about Batman or Superman, but is more focused on the "Super Sons" in that title. And, despite what you may expect from an adventure following around a couple of super-powered tweens, Battle of the Super Sons is a suprisingly fun and engaging animated adventure. It may, in fact, be one of the best animated films DC has released so far.

Batman and Superman: Battle of the Super Sons starts on the Kent farm, with Lois (Laura Bailey) preparing for the birthday of her son, John (Jack Dylan Grazer). John is understandably upset because his dad, Clark (Travis Willingham) hasn't been home for two weeks, stuck away on business. What John doesn't realize (because he's never been let in on the secret) is that his dad is, in fact, Superman. That changes, though, after Clark misses John's baseball game on his birthday (which is understandable as Superman had to stop a tsunami off the coast of Japan). John gets so upset at his father breaking his promise to be at the game that the younger Kent runs off, crying... only for laser beams to come out of his eyes.

Realizing that his son is developing powers, Clark reveals the truth to John. The boy takes it really well, revelling in the fact this his dad is the greatest superhero around. Hoping to learn more about his son's powers, Clark takes John to see Bruce Wayne (Troy Baker). There John is introduced to Damien (Jack Griffo), the current Robin. Things between the two... don't go well. Still, they're forced to team up together soon enough after an attack on the JLA Watchtower puts the Justice League out of communication. Soon, the heroes are showing up once again, but they aren't acting like themselves. It's almost like they've been taken over, and they have... by the alien Starro (Darin De Paul). As the only two superheroes no affected, it's up to John and Damien to fight the aliens and, hopefully, save their dads in the process.

While there's much to like about this film -- the characters, the writing, the voice acting -- there is one part of this production that didn't really gel for me: the animation. DC boasted in their various PR materials that this film is the first full CGI-animated production in the DC line. While that is true, frankly the CGI animation really isn't anything special. It's not necesarily terrible looking, but for the most part it's hard to tell that anything is CGI animated. Everything is fairly flat, without a lot of depth. But the characters also have really weird details, like a strange bit of permanent shadow under Lois's chin, Superman with a huge, Dorito-shaped body, and more. It's hard to say this looks good, and while the CGI isn't glaringly bad, the art direction in general doesn't really have the spark or creativity of DC's other, more traditionally animated, films. 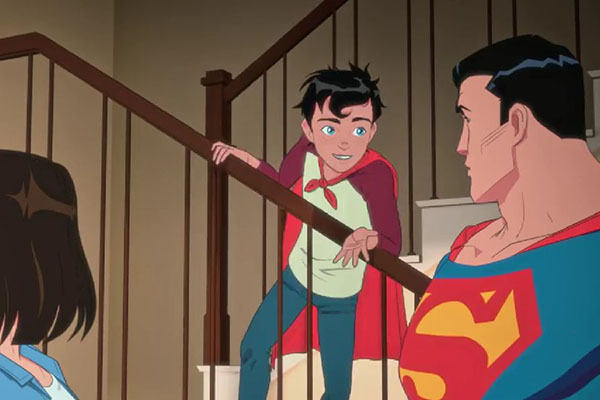 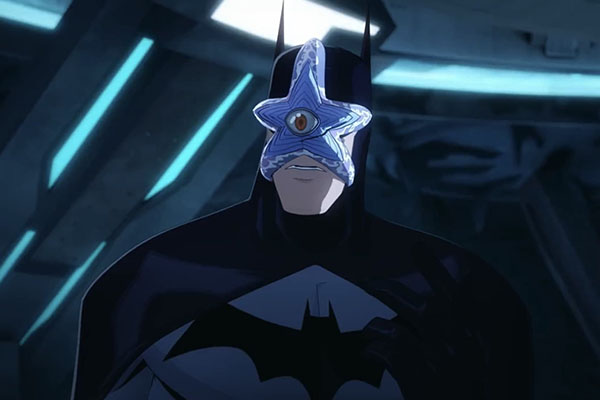 That's largely a minor quibble, though, in comparison to all the things this film gets right. First and foremost, it manages to cram a whole lot of DC continuity into a relatively tight 80 minutes. We don't just get the introduction of Johnathan and his life on the farm, but Superman, Batman, Damien, the Teen TitansStarted in The Brave and the Bold back in 1964, the Teen Titans were a supergroup formed of the younger sidekicks of the more famous heroes in the DC Comics line. Over the years the team has been reformed, rebooted, and relaunched, but always with that basic premise in place., the Justice LeagueThe premiere team at DC Comics, their version of the Avengers (which actually came before the Avengers and, really, has existed in some fomr since the early 1940s), the Justice League is the team-up to end all team-ups, featuring some of the most popular, and longest running, characters in all of comics history (and also Booster Gold)., the Watchtower, the Batcave, the Fortress of Solitude, Krypto, Jor-El, Lex Luthor, Starro, and more. The film handles all this with assurance, only briefly saying a name or giving a tiny tidbit of story while assuming we can fill in the rest. It wisely, then, keeps the focus on the sons despite all the deep-cut references its making, leading to a story that feels tightly woven into the DC continuity without feeling beholden to giving an essay about every character as they walk on screen. That's great.

Also working in this film's favor is that is knows how to have fun. The script is light and funny, with plenty of jokes. This is a story told, largely, from Johnathan's perspective, so it would have a much lighter tone than anything that wallowed in the world of Damien Wayne, for sure. But then the movie is willing to just commit to the lighter tone, with gags like Superman commenting on Batman and his crime fighting style. "He gets rather grumpy when I try to help," he says, watching Batman beat the snot out of the Penguin. Or Johnathan exploring the Batcave and coming across Damien's Bat-cow. Yes, a cow in the Batcave. It's silly (right down to the bat-markings on the cow) but also amusing. At each turn the film finds a way to inject just enough humor into the story to keep things light and fresh.

This is not a grim-dark movie by any stretch, so those hoping for something that wallowed in the darker shades of Gotham arrived for the wrong film. Johnathan lifts up Damien, and by the end the two are joking and ribbing each other like two old pals. Of course, honestly, this makes for one of the more enjoyable Damien Wayne performances in the DC universe, redeeming a character who (by this film's own admission) can be a real dick sometimes (a dick, but not like Dick Grayson). Johnathan, meanwhile, shines as a little version of Superman, full of hope and optimism about his time to come as a superhero. This film really paints a bright picture for the kid, and hopefully this is an angle, for both of these super sons, that gets explored in a sequel or two down the road.

Meanwhile, I feel like the threat imposed by Starro here leads to one of the better takes on the villain yet seen in the wider DC universe. While I liked The Suicide Squad, that film was more about those "heroes" than the giant alien starfish. This movie gives Starro his proper due, and that makes for one of the better villain takes in superhero media. Frankly, despite the light tone of this movie, Starro's parasites crawling out of their hosts mouths is creepy and a bit freaky. It makes for a wonderful contrast to the tone of the movie and really makes the villain feel that much more evil and effective. 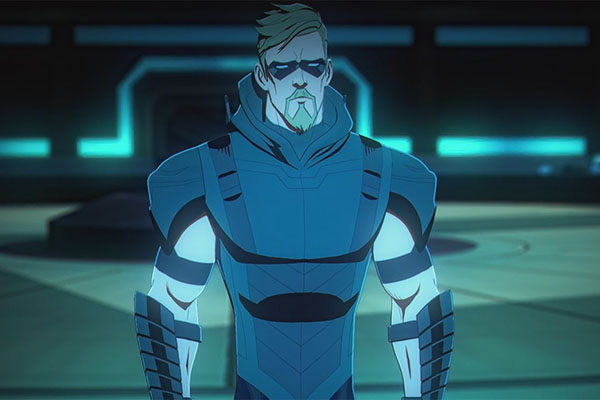 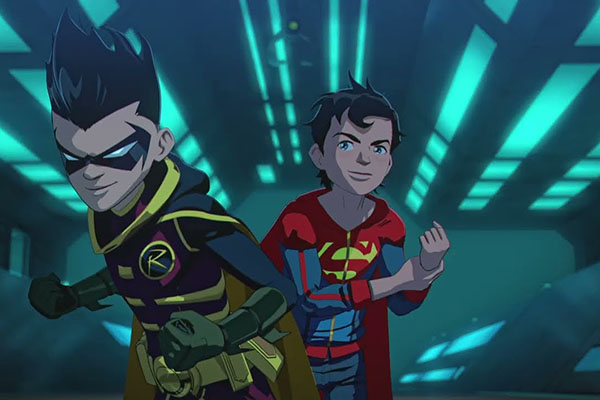 Honestly, every speaking character comes across really well here, from the lead characters to the little cameo apperances. Sure, not every character gets the depth you'd like -- most of the Teen Titans are seen but not voiced -- but in generall they're handled well and provide needed color for the film. Plus, you could easily see them showing up in a future sequel, such as Johnathan and Damien joining up with the Titans for an adventure. The possibilities laid out here, without the film even trying, show just how well this film handled its world.

I think it says a lot that I actually legitimately would like to see a sequel to this movie. DC has gone in big on building their new animated movie series, the Tomorrowverse, but honestly most of the films in that series have left me cold. A series of films set in the Super Sons-verse, though? Sign me up. Despite it's wonky art style this is the universe worth following, and hopefully DC can do more with these characters, and their version of the world, in future installments.