The Man in Black

Saying that the DC Extended UniverseStarted as DC Comics' answer to the MCU, the early films in the franchise stumbled out of the gates, often mired in grim-dark storytelling and the rushed need to get this franchise started. Eventually, though, the films began to even out, becoming better as they went along. Still, this franchise has a long way to go before it's true completion for Marvel's universe. is not like the Marvel Cinematic UniverseWhen it first began in 2008 with a little film called Iron Man no one suspected the empire that would follow. Superhero movies in the past, especially those not featuring either Batman or Superman, were usually terrible. And yet, Iron Man would lead to a long series of successful films, launching the most successful cinema brand in history: the Marvel Cinematic Universe. should not come as some big shocking statement. DC rushed the production on their flagship cinematic universe and have been paying the price for it ever since. Tonally the series has been all over the place, from grim-dark features directed by Zack Snyder to light-hearted fare, dark comedies, and everything else you can think of. There's been no through line, no single voice bringing it all together. That's how you can get two films, Shazam! and Black Adam featuring heroes with shared powers but where the films feel like they came from two completely different movie series. These films are not cohesive in any way, from Man of Steel on down the line, and it's hard to see how DC and its producers can pull this universe out of its tailspin. 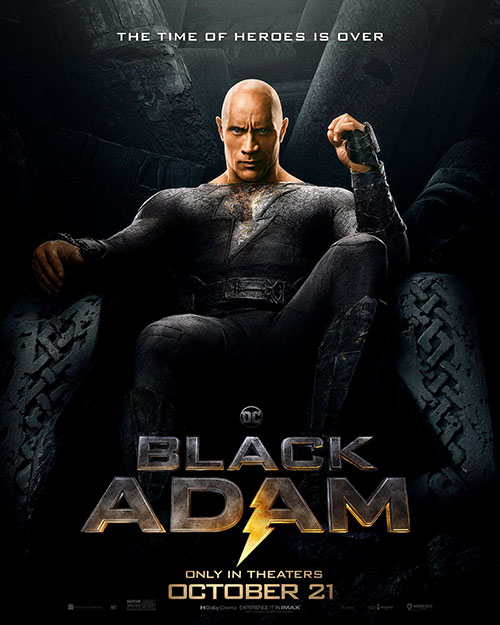 As a movie designed to help focus and bring the DCEU into the new future, as lead Dwayne "I am like a rock" Johnson promised, this film under-delivers. It's still tonally all over the place and doesn't really point us in an identifiable direction for the future. Putting that kind of weight on this film, Johnson's protestations or not, is too much for this cheesy bit of cinema to hold. You can't go into Black Adam expecting the next Justice LeagueThe premiere team at DC Comics, their version of the Avengers (which actually came before the Avengers and, really, has existed in some fomr since the early 1940s), the Justice League is the team-up to end all team-ups, featuring some of the most popular, and longest running, characters in all of comics history (and also Booster Gold). film (well, unless your expectations are built on the last Justice League film).

However, if you can turn off your brain and go into this film expecting a bunch of cheese then Black Adam delivers. I liken this film to another Johnson-starring franchise starter, The Scorpion King, as it shares a number of qualities with that movie. It's silly, despite the best efforts of his star and all the carnage written on the screen, and over-the-top, and Johnson can't help but deliver his standard, one-liner spouting performance. It's a craptastic movie that's watchable when you don't expect it to be anything more than that. That's why I left the theater with a big smile on my face; I went in knowing the movie would be fun but dumb, and I was right.

The movie tells us about the rise of the Protector of Kahndaq, a small kingdom that rose to power on the cradle of civilization thousands of years ago. There, an evil king, Ahk-Ton (Marwan Kenzari), enslaved his people so they could harvest the magical element he needed to create the Crown of Sabbac. With that crown he could gain the power of the Six Demons of Hell and become their avatar, an all-powerful being that would rule the world. Thankfully to combat him the six powerful sorcerers summoned a champion, one who they gifted with their magic, the power of Shazam. He battled the king and stooped the rise of Sabbac, saving the world. The sorcerers then entombed the champion to await a day when he would be needed again.

Cut to the present day and the land of Kahndaq has been taken over by Intergang. They've been searching for the crown, leading archaeologist Adrianna Tomaz (Sarah Shahi) to search out the crown, alongside her brother Karim (Mohammed Amer0 and friend Ishmael Gregor (also Marwan Kenzari). But when Intergang finds the crown at the same time our team does, Adrianna realizes she has to raise the protector buried at the site of the crown. With the utterance of "Shazam", up rises Teth-Adam (Johnson), who immediately starts beating the shit of the Intergang goons, killing anyone that stands in his way. This then draws the attention of the Justice Society -- Aldis Hodge as Carter Hall / Hawkman, Noah Centineo as Albert "Al" Rothstein / Atom Smasher, Quintessa Swindell as Maxine Hunkel / Cyclone, and Pierce Brosnan as Kent Nelson / Doctor Fate -- who see Teth-Adam as the greater threat to peace. Thus begins a multi-way battle for the crown, and the soul of Kahndaq, between all the forces in the country. 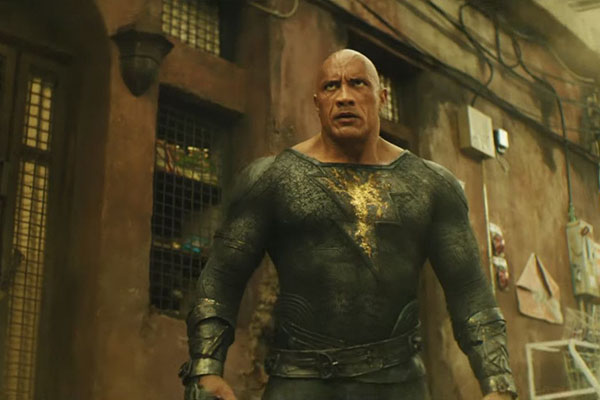 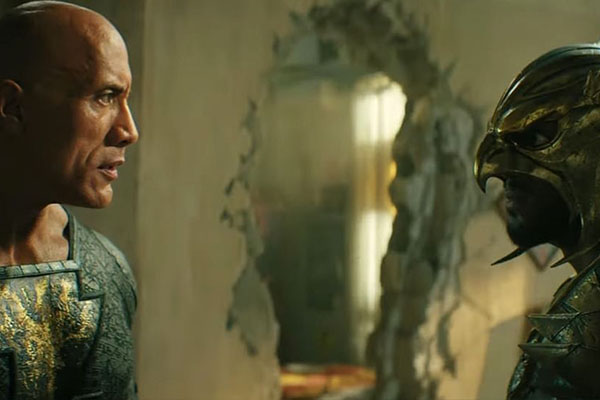 The plot for Black Adam seems pretty messy when you spell it out like that, and believe me it's even messier on the screen. There are plenty of elements introduced that battle with each other, characters who have to change motivations quickly and on the fly to suit the needs of the two-hour run time, and a lot of logic leaps to be had as well. This is not the most coherent movie, start to finish, and the film does assume you'll just go along for the ride for most of it.

Frankly, it feels like a three hour movie that was drastically cut down in post-production, something that had to have a bunch of re-shoots done for the quieter scenes just to cram as much plot in as they could. This feel doesn't really have much time to breathe, always rushing from one set piece to the next as the team smashes all its superhero toys together. Someone looking for a movie that fully explores all its ideas, all its characters, all the elements at play, is looking at the wrong film. The version of Black Adam shown on screen doesn't really manage all of that.

Instead it spends a fair amount of time on our hero, Teth-Adam (who eventually takes of the moniker of Black Adam) and the Justice Society, making sure that we understand all the superheroes. It wants us to but in not only on our central anti-hero but also Hawkman, Doctor Fate, Cyclone, and Atom Smasher. It doesn't pretty well in that regard as I would have stated, before this film, those characters were all but unfilmable. Sure, the movie doesn't go deep on anyone here -- we don't learn anything about Hawkman's many lives and quasi-immortality, nor do we get much back story for Doctor Fate either -- but we get just enough from their interactions, and their displayed powers, to want to see more from all the heroes (and anti-heroes) on display here.

As a bonus, the film doesn't feel like it's setting up all its heroes so they can go off to have their own side adventures. While I'm sure DC would love to launch a Justice Society film (and considering how well they displayed Cyclone and her powers, I would watch the shit out of a solo adventure for her), the movie never feels like its dragging its feet to do a bunch of setup. It focuses om the characters, and the action, and lets everyone fight it out on the screen as audiences greatly desire. The film is full of these kinds of simple pleasures, and that works to its benefit. 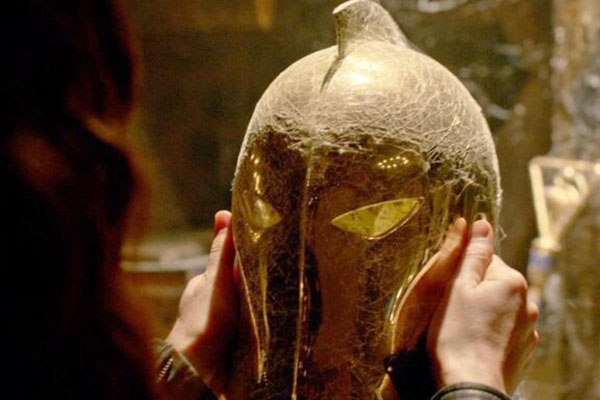 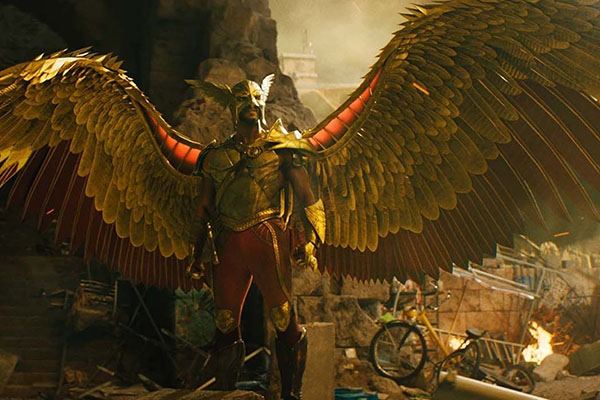 The greatest flaw of the film is that the nominal villains, Intergang, feel like an afterthought once Black Adam arrives. Sure, the crown and the man that wants it are the driving plot line, but once that villain is revealed, Intergang is reduced to just a bunch of goons. One would expect that they'll come up again in some future DC film (maybe to tie into Darkseid and his storyline) but who knows. They don't get enough development to feel like anything more than hired goons, and if you didn't know from the comics who Intergang were you'd have no clue after watching this movie.

There are other flaws we could harp on if we wanted, like how the film seems at odds with itself over the tone. Teth-Adam is a murderer, and he acknowledges this, but the film tracks all his carnage with a favorable eye designed to make it all look really cool. The Justice Society condemns him but the film never does, and its hard to really call him an anti-hero when the film hardly invests in it. The movie spends more time building him up as a hero, courtesy of Adrianna's son Amon (Bodhi Sabongui), than it ever does actually calling him a villain. He's he hero of this story and the film never really acts otherwise.

Still, I found myself enjoying this movie. Tonally erratic as it may be this flick at least knows how to have fun (something The Batman was sorely lacking). This film wasn't a big success at the Box office, and that's likely due to bad reviews (from reviewers expecting something more than they got) and audiences already burned out non-MCU superhero fare. Black Adam isn't BatmanOne of the longest running, consistently in-print superheroes ever (matched only by Superman and Wonder Woman), Batman has been a force in entertainment for nearly as long as there's been an entertainment industry. It only makes sense, then that he is also the most regularly adapted, and consistently successful, superhero to grace the Silver Screen. or SupermanThe first big superhero from DC Comics, Superman has survived any number of pretenders to the throne, besting not only other comic titans but even Wolrd War II to remain one of only three comics to continue publishing since the 1940s. so you can't expect him to pull in those kinds of numbers in this decade of superhero cinema.

You can't expect Black Adam to redefine the DCEU or be some MCU killer. It's not that kind of film. But if you can go in expecting craptastic cheese then you won't be disappointed.