The Bat Gets Shell Shocked

Comic crossovers are nothing new. From the moment a SupermanThe first big superhero from DC Comics, Superman has survived any number of pretenders to the throne, besting not only other comic titans but even Wolrd War II to remain one of only three comics to continue publishing since the 1940s. and a BatmanOne of the longest running, consistently in-print superheroes ever (matched only by Superman and Wonder Woman), Batman has been a force in entertainment for nearly as long as there's been an entertainment industry. It only makes sense, then that he is also the most regularly adapted, and consistently successful, superhero to grace the Silver Screen. were introduced, their owners were just itching for a way to cross them over. This begat Justice Societies, any number of Crises, and untold numbers of share continuities. Other comic companies got in on the action, of course, which is how we have any number of Alien vs. DC Comics, Star Trek vs. X-Men, and Archive vs. the Predator comics. I suppose what's most surprising is that it took until 2015 for a Batman/Teenage Mutant Ninja Turtles book to come out considering how long both those properties had been around. 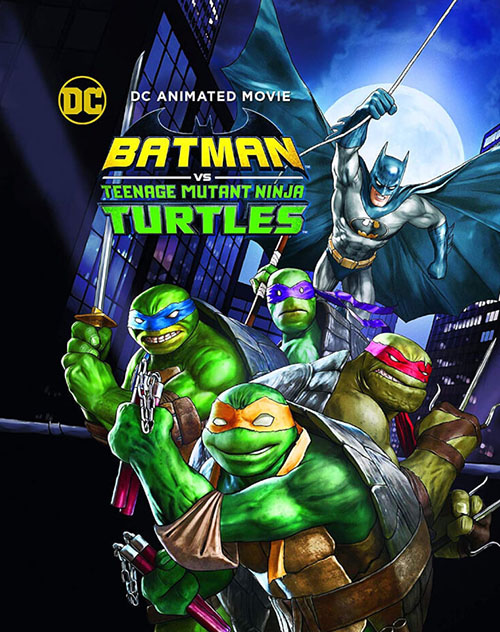 We're not going to discuss that comic (once I start doing regular comic reviews we'll likely get back to it then), but instead I want to look at the more recently released animated film based on that series, Batman vs. Teenage Mutant Ninja Turtles. While the basic structure of the stories is the same -- Batman fights the TMNT and then they team up to take on the Shredder and various Batman rogues -- the stories are different enough in construction that we can treat each differently. Plus, the animated movie just came out on home video which makes this a prime time to cover it. Any excuse to watch a silly animated movie.

The start of the film plays out much like you'd expect. We start in Gotham where a series of tech heists is ongoing. Batman (voiced by Troy Baker) is on the case, with the help of Robin (Ben Giroux) and Batgirl (Rachel Bloom). Unsure of who might be stealing the tech, and for what purpose, their paths cross with four mysterious turtles -- our favorite Teenage Mutant Ninja TurtlesOriginally dreamed up as a parody of Marvel's Daredevil comics (going so far as to basically reproduce to opening shots of that comic's hero gaining his powers), the Teenage Mutant Ninja Turtles not only launched a sudden boom of anthropomorphic fighting animal comics but have, themselves, starred in multiple comics series, TV shows, and movies. of Leo (Eric Bazua), Raph (Daren Cross), Donnie (Baron Vaughn), and Mikey (Kyle Mooney), and inevitably each side suspects the other. I mean, come one who would trust a man dressed like a giant bat? or four mutated, human-sized turtles?

Of course, neither side is at fault as they're both tracking the same suspects: the Shredder and Ras Al Ghul, two master nasties who have teamed up to further their plans. They have two goals: kill the heroes and infect all of Gotham with Mutagenic Ooze/Joker Gas. This will destroy the city and, in the process, rid both villains of perpetual thorns in their sides. Can the heroes stop the bad guys before the city is lost?

Despite its feature length, Batman vs. TMNT is a pretty plot-light story. Much of the time is spent not on the mystery of who the bad guys are but on pitting the heroes against each other and then against various Batman villains (usually right after they've been mutated from the ooze). This isn't a film looking to have a deep story because the goal, really, is to smash a bunch of toys together while the actors make the equivalent of "boom" and "zap" sound effects, just like a kid would. 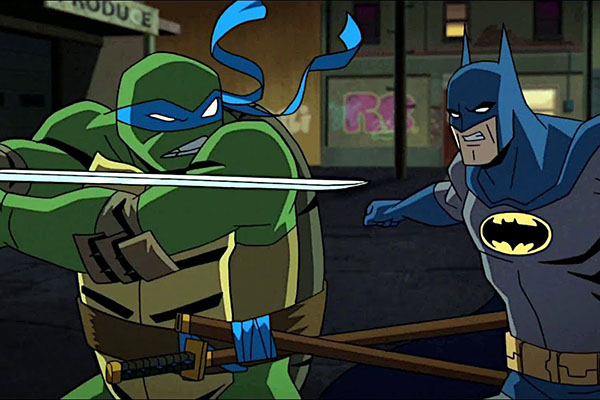 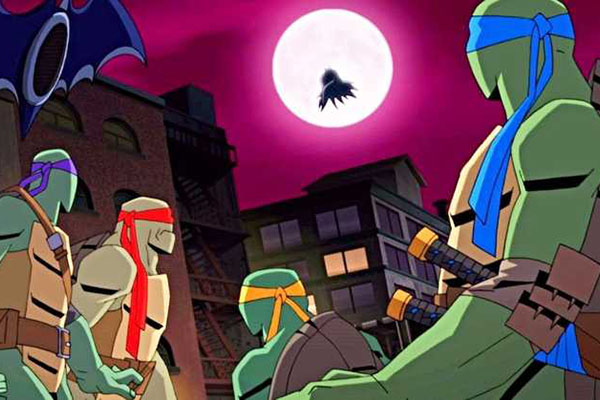 And, thankfully, on that front the movie does succeed. When you think of a Batman/TMNT crossover, all you really want is mutant action, lots of Batman villains, and plenty off fighting, and on that front the movie delivers. There are multiple action set pieces, each more ridiculous than the next, and the movie never stops trying to one-up itself. Have you ever wanted to see League of Assassins ninjas turned into wolf men? What about having all of Arkham Asylum mutated into hideous monsters? Does the thought of Mister Freeze as a polar bear delight you to your core? How about a climactic fight where a foot soldier is mutated into a T-Rex? If any of those moments sound great to you, then this movie is exactly what you want.

Does any of it make sense? Heck no. As established back in the comics, mutagen transforms a human into the animal they were last near (or transforms animals into humanoid forms of themselves). For a ninja to become a T-Rex it would have had to be near that dinosaur, a feat rendered impossible by the passage of the last, oh, 65 Million years. None of the Arkham inmates are anywhere near animals other than the Turtles so, in theory, all of them should become mutant turtles, but they don't. And yet I really didn't care. While it wasn't logical, based on the rules of the comics, for all these people to turn into random, stupid monsters, I also enjoyed every gleeful, idiotic moment of it, logic be damned.

Plus, the Turtles ad some needed levity to the proceedings. Batman movies are great, but they're all so serious and grim now -- the Nolan movies pretty well cemented that. It's nice to have a tale of the Bat (and his colleagues) that has actual humor and lightness to it. The humor is almost that of Batman: The Brave and the Bold, dumb and goofy but totally enjoyable, and it really works. The Turtles have come a long way from their own grim dark origins on the pages of Mirage, and I'm glad the producers didn't veer back into that territory, instead giving us the fun TMNT we're now used to.

Really, if anything doesn't work about the movie it's the fact that while we get plenty of time with the heroes, the villains never really come into focus. The movie just expects us to know who Ras and Shredder are (which, sure, we likely do) but it never really invests in them. Shredder is a grumpy thug with little more investment in his character than we ever got from the 1987 cartoon series. Ras Al Ghul, meanwhile, is all big talk and menacing speeches, but he barely does anything. He exists, but we never fear him. 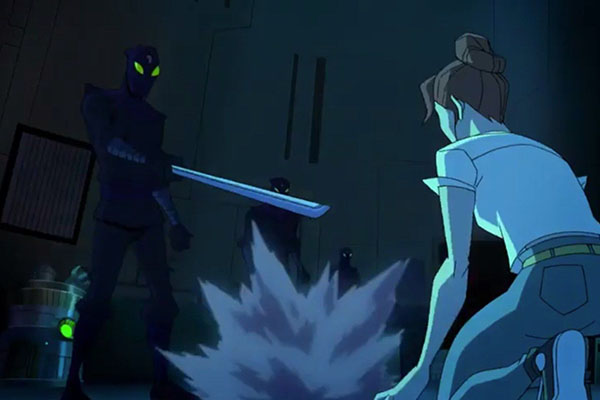 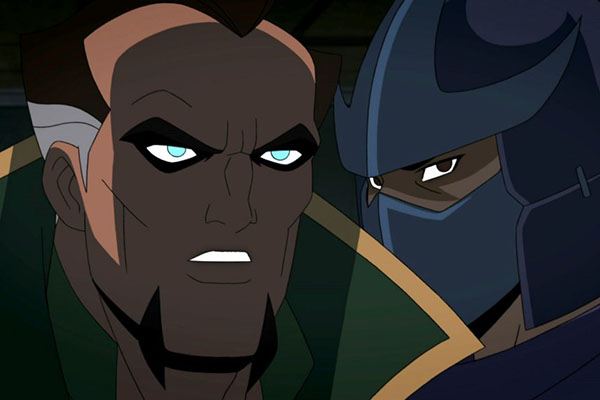 But does any of that really matter in the face of a sequence where Batman gets mutated into a Man-Bat and the TMNT have to fight him? Do we really need plot, or fleshed out villains, or detailed musings on the workings of mutagen and technology when we can have fun sequences of Batgirl and Donnie hanging out in a lab, goofing off. The amount of glee we feel watching this movie is like Mikey first gaining access to the Batcave: it's delightful and silly and that's all we need.

Admittedly this movie makes as little sense at times as Batman Ninja, and yet I found myself enjoying it a whole lot more. It's dumb, and bombastic, and never sits still for long, but it also manages to do all this while providing enjoyable heroes and coherent set pieces. Batman vs. TMNT is everything I wanted Batman Ninja to be, with the added bonus that I didn't have to watch an anime in the process.

Batman vs. Teenage Mutant Ninja Turtles is an explosion of action figures writ onto your television. It says everything it needs to in the title and the only question you have to ask yourself is if that's the kind of movie you want to watch? It holds together well enough that you never start questioning its (meager) story while at the same time throwing just enough distractions at you that you're willing to just go with the flow. If this kind of movie will appeal to you there's really nothing more to say; you'll enjoy it or you won't and everything you need to know is right there the second you pick it up from the movie shelf.