Up until now Ankh Morpork has been a nebulous entity. It's a place that's been talked about, and described in pieces, but we're still not at a point where the whole of the city really makes sense. The best view we've had of the massive, sprawling, megalopolis has been from the streets itself as the Night Watch, lead by Sam Vimes, lead us on a dragon hunt through the city in Guards! Guards!. It's still hard to tell how the city operates or who all are the true power players in society (well, beyond the Patrician, of course). 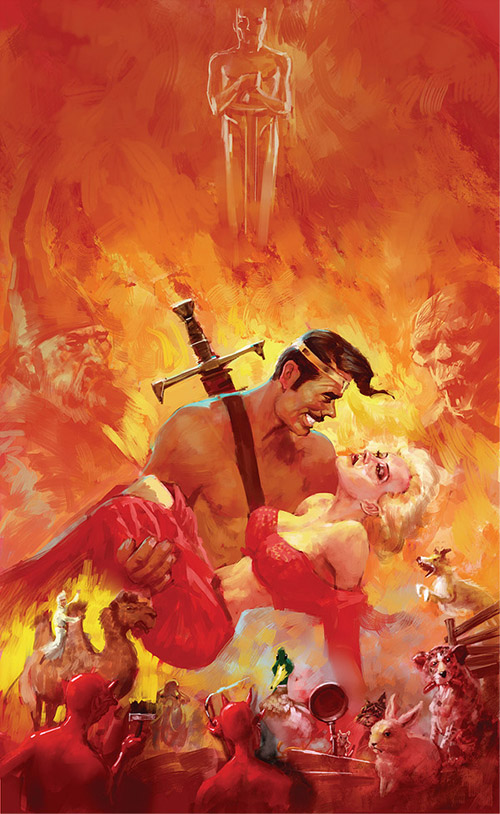 The city does begin to come into focus in the tenth DiscworldAt first blush, the Discworld series seems like just a parody of fantasy literature. Dig into any of the books, though, and you'll find deep and funny tales of a world just slightly off from our own. A world that, yes, is a flat disc carried through space on the backs of four elephants that, in turn, ride on the back of a giant space turtle. book, Moving Pictures, which is ironic since so much of the book takes place outside of the city. In Moving Pictures the Alchemist Guild of Ankh Morpork stumbles upon the idea of celluloid (octo-cellulose) which can allow light to be run through it and images can be streamed out to a screen. Of course, getting the pictures on there involves little demons in a box, furiously painting away one frame at a time at super high speeds, but that's just part of the magic of show business. Into this nascent business steps Victor, a wizarding student who really just wants to find a career that requires him to do the least amount of work possible. Being a star in front of the "click" (as films are called here) seems easy since he doesn't do anything "real". It's the perfect fit.

Wouldn't you know it, though, the idea for film was really just part of a larger plan. The unreality of the clicks allows for the fabric of the Discworld to become thin, and into that void could potentially step the creatures from the Dungeon Dimensions. Soon the moving picture business is crackling, everyone is making money, and the veil between our world and the dungeon dimensions gets thinner and thinner. It's up to Victor, his co-star Ginger, and Gaspode the talking dog (brought to life by the power of moving pictures), to find out where in the world the veil is most thin and find a way to stop the dungeon creatures before they break through and destroy the world.

While all the characters in the book come from Ankh Morpork -- not just Victor but also Ginger and Gaspode, along with many other new side characters introduced in this book -- this ends up being the Ankh Morpork book that helps define so many people to appear later in the series that, at the same time, spends a whopping 5% of its pages (or so) actually in the city. So much of the book is focused on the land of Moving Pictures, Holy Wood, a setting that never appears again in the series. And yet it does a lot to define Ankh Morpork by setting up so many characters that help to make the city feel fleshed out and real.

For starters there's Cut-Me-Own-Throat (CMOT) Dibbler, a character appeared in a few scenes in previous books (notably selling "genuine" dragon hunting gear that was both on-point and totally useless, like a stick that you could hold in front of you to detect dragon fire and, when it caught fire, you'd found a dragon). Here, Dibbler takes a larger role, becoming one of the leading managers of a click studio, making unscrupulous money hand over fist before losing it all when the clicks go belly up. This is a common pattern for Dibbler over the years as we move forward from this book, but Moving Pictures establishing a keep detail for Dibber's story: when CMOT gets involved in a venture, it will only end in ruin.

Perhaps the bigger character to get introduced in this book, though, is Archchancellor Munstrum Ridcully. In the previous wizard-related books in the series, there has been a rotating series of archchancellors for Unseen University, Ankh Morpork's premier (and only) wizard college. The wizards are probably the only part of Ankh Morpork society we've gotten to know in the past, but after Sourcery the exact makeup of the college, and how the groups within it worked, was decidedly unclear. This book addresses that head-on, realigning the school's structure and creating a new cast of characters to populate the upper echelons, from the Senior Wrangler to the Dean and the Bursar, all of whom will show up again and again (instead of rotating out like in previous books). But at the center of it all is Ridcully.

Ridcully is one of Pratchett's bets realized characters, up there with the Patrician and Sam Vimes. He's a brash, loud man unlike any of the other wizards in the school. Essentially a hedge wizard -- literally, as he prefers nature to life in the city, spending his days until he was promoted to archchancellor out on his lands, hunting and running and swimming. Ridcully loves nothing more than going out for a good job at 6:00 AM before taking in a hearty breakfast and then doing some exercises in the gym, while the rest of the staff prefer to sleep till noon and take in lunch as the first meal of the day. And Ridcully never listens, only hearing what he wants to hear before charging, head first, into whatever situation he wants. He's honestly, a breath of fresh air for the Wizards, someone to shake up the status quo established by Rincewind and the previous books.

Then there's the alchemists. Although we've been told about guilds in the past, such as the thieves and the assassins, this is the first time the Alchemist Guild has been seen in the series. The alchemists are an interesting group, a set of scientists (who abhor wizards even if they dress exactly like wizards) dedicated to probing the very nature of reality. Largely this involves them mixing chemicals together and then hiding behind something in case it explodes. And, usually, it explodes. The alchemists are a slapstick creation, one designed to add lightness and humor to the book, but they also serve to illustrate that any group can become a guild in Ankh Morpork and this, in turn, will help to add depth and color to the books moving forward; if the alchemists can have a guild, than anyone can (and will).

You will note that the one thing I haven't really talked about is the actual plot of the story. That's because of all the things going on in this novel, the actual plot of Moving Pictures is its weakest facet. Honestly, the adventures of Victor and Ginger falling into the clicks and then having to fight dungeon dimensions just doesn't feel that original with everything we've already seen in the previous books (not to mention all the interesting characters added to this novel). Victor comes across like a diluted version of Rincewind, maybe not as cowardly but also not as interesting (and I hated Rincewind so that should tell you something). Ginger fares worse, being little more than a prop for the book to move around but never really becoming a fully realized character. She's given very little to do to the point where, when she's not in a scene, I honestly forgot she existed in the book.

Worse still is that Victor and Ginger are supposed to have chemistry and end up in love by the time the book ends, but neither of the characters really comes across as interesting people and the story sets up zero chemistry between them. They're just blank voids set into the roles of lead characters but we're never able to attach to them, nor do they really attach to each other. There's something missing from this core relationship and it holds back the core story of the book.

And, honestly, the novel's parody of Hollywood just isn't that interesting either. Sure, there are a number of moments that line up with real movie production, scenes that elicit a small chuckle, but none of it really pulls together in the way a good parody like this should. The humor lacks sharpness leaving this an oddly toothless send-up of the industry. I've seen plenty of Hollywood parodies and even in comparison to the amusing but not great 1995 Get Shorty, this novel is lacking.

I've gone through and reread huge portions of the Discworld series over and over again (I've lost count of how many times I've read the Night Watch books), but this was only the second time I've read Moving Pictures and now I know why: it's just not that interesting. I like so many side character introduced here, but there just isn't enough meat to the main book to drag me back again. It's perfectly serviceable in a series with so many more interesting, funnier novels to read instead. If you're going through the series it's good to make a stop here to learn about many new characters that will continue onwards in the series. It's most telling, though, that neither Victor nor Ginger show up again after this. Clearly we all can see why.