Get Those Blasted Foreigners!

As the DiscworldAt first blush, the Discworld series seems like just a parody of fantasy literature. Dig into any of the books, though, and you'll find deep and funny tales of a world just slightly off from our own. A world that, yes, is a flat disc carried through space on the backs of four elephants that, in turn, ride on the back of a giant space turtle. series has evolved it's gotten more political as well. We saw that with Feet of Clay which, in the process of serving out a murder mystery and political assassination plot, raised questions about identity and the self. Different political matters are brought up again two books later in another "Nightwatch" story, Jingo, although this time it's about cultural identity and the plight of immigrants in a very inwardly-focused nation. 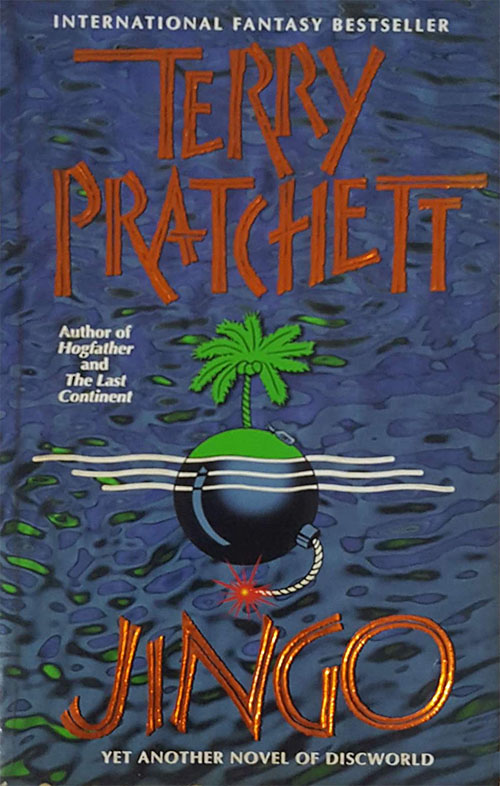 In Jingo, the island nation of Leshp, lost decades ago when it sunk to the bottom of the sea, has returned, right in the Circle Sea smack dab between Ankh-Morpork and Klatch. Unlike Ankh-Morpork, which is a big, walled city packed with people, Klatch is a large, expansive desert country so wide that it would take you weeks to walk across it (if you didn't die in the middle of sands). The existence of Leshp, a potentially valuable plot of land right in the middle of the Circle Sea, presents an issue for both countries as either one could now use the island as a bulwark and outpost against the other. Leaders in both countries want it, but for the sake of peace technically neither can claim it.

Into this mess steps Commander Sam Vimes, leader of the Watch. As a political figure, Sam has to go to political functions, making nice small talk while eating canapes. What he wants to do is go out into the streets and fight actual crimes and he feels like being at these functions is a waste of his time. However, Leshp requires all the higher-ups in Ankh-Morpork society to make with the pomp and circumstance. Enter into that Prince Khufurah, younger brother of Prince Cadram, elder of whom is also the leader of Klatch. An assassination attempt on the younger prince's life puts a strain on both sides, leading Cadram to declare war on Ankh-Morpork Suddenly the Klatchians living on the city are fleeing for their "home" country (even the ones that were born and raised in Ankh-Morpork) as the native citizens yell at them for being "foreign dogs".

And the assassination itself seems fishy, too neat and clean with all the clues presented so easily. Vimes doubts very much that everything is as it seems, but when idiotic dukes and Lords take over the Ankh-Morpork government and demand the city follow on the "acts of war' from Klatch, all hell breaks loose. It might just take Vimes going to Klatch to solve the whole mess.

The story of Jingo is largely focused on Sam Vimes, more than any other character. Sure, the rest of the Watch is there, from Carrot to Angua, Colon to Nobby, but unlike in previous books where many of those characters had their own major plot lines going on, this book feels much more tightly focused on Sam and the case. This main story is interesting, full of political intrigue, Sam battling against the idiots who want to depose the Patrician, and a particular nasty Klatchian free-agent, 71-Hour Ahmed. it has all the twists and turns you want from the best "Night Watch" stories in the series.

In fact, it's so interesting you tend to get bored with the other plot line, that of the Patrician, Colon, Nobby, and Leonard di Quirm, as they investigate Leshp and the political situation across the pond. While the story of Sam and the Watch is full of mystery and intrigue, the Patrician's Leshp plot line is more of a shallow farce. I'm sure the story was included as a way to lighten the book, to add some laughs into what could, otherwise, have been a very deep story. the Discworld books are comedies after all, right?

The issue is that this storyline also ends up being the linchpin of the entire back-half of the book, the plot line that actually solves many of the mysteries of the tale and sets the big climax in motion. But you don't care because Colon and Nobby are such idiots, bumbling their way through an unfunny and silly section of the novel. If other characters had been paired up with the Patrician for this section the storyline would have had more weight, but the fact is that Colon and Nobby are the idiot characters, good for making a point about something (as in, don't listen to these two because they're idiots), but they aren't strong enough to carry their own stories.

Including Colon and Nobby here, I think, was to make a point about racism. Colon, in his dumb, conservative ways, has a lot of racist ideas about the Klatchians that he shares with Nobby on the regular. The war with Klatch just allows him to air our more of the idiotic ideas. Sending him to Klatch lets him not only air out his idiotic notions about the foreigners by pretending (and failing) to be one of them (in his capacity as the worst spy ever) but also to learn a little about how the other side lives. And were it anyone other than Colon, I might have cared. I might have appreciated that he came away with a better understanding of the Klatchians. I might have felt like he earned it. But he's an idiot so I don't really care at all.

Jingo could say a lot, in fact, about politics and racism. It could be an interesting character study on how two nations can go to war and how the people living within each area might end up with real racist ideas about the other side. It could, really, be a strong, solid book with a voice and a perspective worth hearing. Instead it bungles the deeper storylines and ends up a mild, toothless farce.

I really wish the back half of the book were better because Jingo starts out so strong. It had a good setup, a tightly focused plot, and a lot of intrigue. It gets up to speed quick and then coasts forward for a while on the solid story and good will it's built up. Then it all comes crashing down in a mess of an ending. Right when the book should be reaching its climax it all comes apart, almost like the author wrote himself into a corner and had to end it somehow. It doesn't have a voice, it doesn't have much to say, and it's neither deep enough nor funny enough to really finish strong. I tend to like all the "Night Watch" books, but Jingo is the rare title in the sub-series that I just don't enjoy at all. It's a real missed effort from Pratchett.