The Discworld Comes to a Close

With this we reach the last full novel in the DiscworldAt first blush, the Discworld series seems like just a parody of fantasy literature. Dig into any of the books, though, and you'll find deep and funny tales of a world just slightly off from our own. A world that, yes, is a flat disc carried through space on the backs of four elephants that, in turn, ride on the back of a giant space turtle. series. Although there are other materials we could cover over time (the "Science of Discworld" books, various art collections, a few short stories, and series/movie adaptations of the novels), this is the last full book we'll ever get. The novel was the last one completed by Pratchett, with his daughter, Rhianna Pratchett, saying she wouldn't be writing any further novels in the series, and all of Terry's half-finished novels having been destroyed as per his wishes. This is it, and it's not exactly the greatest finish for the series. 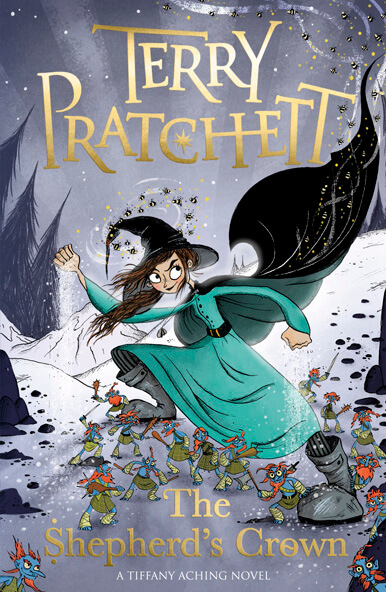 As an editor's note relates, this book was "complete", but the way Pratchett wrote, he probably could have gone on tinkering with this novel for a few more months, just to get everything right, until the editor had to rip it out of his hands (a common occurrence, apparently, as the writer hated to let his projects go). Reading through it, the novel does feel half-finished, though, like the book could have used another couple of times through for Pratchett to add the spit and polish to really make this novel sing. That couldn't happen, and that leave this book feeling oddly incomplete, a full story that still feels rather slight.

I've noted before that I'm a big fan of Tiffany Aching, finding her to be one of the best, most fully realized characters on the Disc. She shows how YA fiction can be done "properly" without making the character feel "twee", too smart of knowing for her own good and certainly never condescending to the audience at all (for an example of how not to handle a character like this, look no further than Enola Holmes). She's always felt solidly real, an actual person living in this made up world of dwarves and elves, of witches and wizards, might and magic. And she grounds this book, continuing the best the best thing in it, even as the book just kind of staggers through the motions.

We open with the death of Granny Weatherwax. As a witch she's knows when her time is coming, as as such she makes preparations and gets everything ready for the night of when Death arrives and takes her from her body. This leaves a power vacuum for the Witches of the Disc, as Granny might not have been their leader, but she was certainly the best leader they most certainly didn't have. Someone else now has to fill that role, and it was Granny's dying wish that Tiffany take over as the "not-head" of all witches. This is fine for many of them as Tiffany has helped her fair share of the witches over her many adventures, and proven herself time and again as just as capable as Granny was, if not more so. Not everyone, though, is happy with this arrangement, chief among them Mrs. Earwig (pronounced AH-wij), who though of herself as the "greatest among equals".

Tiffany's hold over her position is put to the test, though, when the Elves come back to the Disc. These nasty creatures, who love to toy with the minds of men as they slowly rip them apart for sport, were banished by first Granny (Lords and Ladies) and then Tiffany (The Wee Free Men). But with Granny gone, the magic holding them back has weakened, so they start making excursions into the Disc once more. It's up to Tiff to rally her witchy troops and prepare for a battle against the Fae for the fate of the Disc.

Although I'm generally not a fan of retreading material, I didn't hate the fact that the villain of this booth was, once more, an Elf. It had been long enough since the last elvish novel in the series -- eleven novels, to be exact -- and bring them back does have a certain symmetry to it as the elves were the first real villain Tiffany had to fight. The creatures that proved the young girl could be a witch should, in their own way, be the ones to prove that she's the top witch of them all.

That said, the Elves aren't really used all that much here. This is where the lack of constant editing from Pratchett really hurts, as the plot line for the Elves feels much more sketched in than it would in his other novels. Having eliminated their Queen, the Elves are now led by Lord Peasebottom, a nasty Elf indeed from the few glimpses we get of him. But there in lies the issue as they're just glimpses. In comparison to the Queen, or the Hiver, or any other villain Tiffany has gone up against, Peasebottom just doesn't have any substance to him. We get a couple of brief scenes and then he's relegated to the background until the big, last battle.

And, in that same regard, the last fight doesn't have the weight it should. It's too short, too lacking in climactic moments, to sell the "war" the Witches have brought to the Elves. With more time given, this last section would have been a real show-stopper, but it's just too slight, over too quickly, to really feel like the elves were ever a danger to the Disc at all. This section just needs to be longer, to draw out the meat of the story and give it the necessary depth to really sell the conflict.

The novel marks a growing maturity for Tiffany as well as she finds her own place, her own adulthood, in the story. She stops living in the shadow of other people -- no longer living at home with her parents, nor taking over Granny's cottage (which was left to her). Instead she builds her own cottage, learning the skills needed, so she can have her own place, be her own Witch. That's a great step for her, but it happens so late in the story it feels like an addendum without any necessary conclusion to come after. It's like the promise of a new adventure just around the corner, the hope of what she'll do next... but there won't be a next.

The Shepherd's Crown just needed more time, time it wouldn't get due to Pratchett's death. At the same time, if further stories had come up to flesh out Tiffany's new life -- her new place among the Witches, the future of her own life -- that could also have helped to make this story feel more complete. But, of course, we won't get that either (nor will we get to two or three partial novels that Pratchett had started, all of which were hinted at in the editor's note that opens this novel). We're left unfulfilled in part because there still so much left for Tiffany to do, and now she'll never get the chance.

I'm a huge fan of the Discworld (and if I'm overly critical of some of the novels as I've gone through them, reviewing them for this site, it's only because I care), and I enjoyed going through all these books again. But now, here, at the end, I just wish there was more. We hadn't reached the end of the journey for the Disc but, sadly, the Disc reached is own end without us. Tiffany needed a little more time, as did so many other characters (appearing here and in other books). It's sad to see Pratchett go, and sadder still that the ending we got wasn't quite the ending we needed at all.