Learning to Be a Witch

As I've noted before, I wasn't that big a fan of the DiscworldAt first blush, the Discworld series seems like just a parody of fantasy literature. Dig into any of the books, though, and you'll find deep and funny tales of a world just slightly off from our own. A world that, yes, is a flat disc carried through space on the backs of four elephants that, in turn, ride on the back of a giant space turtle. Witches. While I liked the individually as characters I didn't really engage with the stories that were told about now, nor with the way the author, Terry Pratchett, treated the characters (from his narrative voice). I like the author plenty (I've not written about 32 of his books in this series), but I always struggled with the Witches and the way he treated them. I know it's personal preference, of course, because I've talked with plenty of fans of the Witches, so obviously there's a certain amount of bias at play. 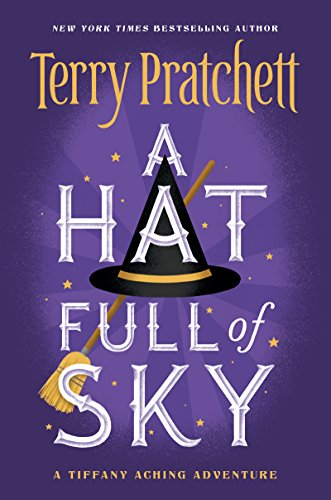 But while I never got invested in the main Witches books personally, I've been a big fan of the Tiffany Aching novels, the YA continuation of the Witches series that picks up and more fully explores being a witch on the Disc. While the Witches books focused on Granny Weatherwax, Nanny Ogg, and Magrat (with Perdita/Agnes coming along later), those novels were intent on the Kingdom on Lancre and that country's view of Witches. How they were Witches in that region was one thing, but we never really learned much about the witches beyond these three (or four) characters. There's a wide world of the Disc with, presumably, a lot of other witches working with their communities, but the books hardly bothered with them.

That's one of the things the Tiffany Aching books change, for the better, as, through Tiffany's eyes, we get to see a lot more of how the witches work and just what their community really looks like. And, frankly, it's an interesting community indeed. We've learned enough about the Wizards to know that they fight like cats and dogs -- in centuries past great wars were waged by the Wizards as they used their magical powers and blasted away at each other. Even when the Wizards weren't at war they still fought and bickered, often killing each other to get a leg up; the best way to get promoted up a level as a wizard was the kill the guy above you in the pecking order.

While the witches don't get along any better than the wizards, really -- they back-bite and snipe verbally at each other all the time, and witches are always looking for a chance to rise in power and become a de facto leader -- they don't resort to all-out war. In fact, witches tend to go for a different kind of magic, one from the head over that of incantations and evocation. Granny Weatherwax always calls if "headology", and that's about as accurate of a term as anything to describe witchcraft as, on the Disc, being a witch is all about using your head and out-thinking your foe (whether it's a world-ending threat or just the witch sitting across from you at tea).

Tiffany is a natural witch, one who came about on The Chalk (a land that doesn't normally produce witches because witchcraft needs steady rock under a witch's feet and chalk is generally too soft for that kind of magic). In her previous adventure, The Wee Free Men, Tiffany took on the Queen of the Faeries (who previously had been featured in the Witches book Lords and Ladies), and this deed earned her some respect from Granny Weatherwax. However, while, Tiffany went up in the esteem of this one witch, other witches-in-training -- among them bitchy Annagramma and shy Petulia -- have trouble believing the story Tiffany would tell. And, frankly, it even seemed kind of dreamlike to Tiffany after all this time.

Danger is waiting for Tiffany as she trains to become a full-fledged witch, though. Her self doubts and worries, along with her growing power, made her a target for an external threat: the Hiver, a formless immortal beast that, over the centuries, has gone from host to host, sucking on their power and feeding, eventually killing to host before moving on its its next target. It's chosen Tiffany as its next host and chases after her as she leaves the Chalk for a year training with another witch, Miss Level, and if Tiffany isn't careful it could take her over completely, wiping away all that makes Tiffany herself.

At first blush A Hat Full of Sky is a pretty solid adventure. Tiffany battles a force she's never even heard of before, taking on the Hiver in a test of wills for control of her life. The Hiver takes over sometimes and causes Tiffany to do bad things. Other times Tiffany can fight it off and battle against it as an external threat. What I really liked, from this story of danger and adventure, is that the tale doesn't end with some big battle but a coming together of minds. Tiffany can fight, and use magic, but it's her compassion in the face of a beast such as this that lets her win the day -- power is great, but heart is what's needed, and this book is smart enough to show you don't have to always have a fight to win the day (and, perhaps, maybe you never need to fight at all).

Looking at it from a YA stand-point, though, there's another angle to take with the story: that of growing up. Tiffany is hounded by her own doubts and worries, about not fitting in when she goes to a new place, about not making friends or being respected. I'm sure that's something a lot of kids can relate to, not only if they're forced to move with their family from one place to another, but also just going from one grade/class to another. Change is hard and self-doubt strikes everyone. For young adults to see a character like Tiffany, who has power and responsibilities, someone that can take on the Queen of the Fairies, have doubt and worry could allow the young readers to also think it's okay for them to have doubts and worries as well.

Tiffany is an interesting character. She's complex, both bold and full of worry, strong and capable but still learning. She has depths and dimensions and it's just one or two character traits, not just a caricature. That's an issue I felt the three older Witches (Granny, Nanny, and Magrat) had, that the books picked on their one or two character traits and failed to give them a lot of depth. There's also the fact that because Tiffany is starting out as a witch she doesn't have all the answers -- Granny might always have a plan and might have the solution for everything but Tiffany, a character positioned as someone that could one day be as powerful as Granny, doesn't have that. She doesn't know all the answers, she doesn't have all the solutions, and she's just learning to be who she wants to be.

I like how A Hat Full of Sky constructs itself, setting up it's foe but still letting Tiffany be Tiffany. It doesn't force her to grow up faster than she's capable, but it also doesn't treat her like a powerless child. It's trust in her abilities why outlining how she needs to grow. And, best of all, it gives her a satisfying way to solve her problems without resorting to trickery or deus ex machina plotting. It's a smart and well-constructed book that trusts its characters, and its readers, as it delivers a satisfying and interesting story. As far as the Witches are concerned, this is the best book in the series yet.