After introducing the goblins officially in the previous book, Snuff, Terry Pratchett really let them loose in the next (and second-to-last) DiscworldAt first blush, the Discworld series seems like just a parody of fantasy literature. Dig into any of the books, though, and you'll find deep and funny tales of a world just slightly off from our own. A world that, yes, is a flat disc carried through space on the backs of four elephants that, in turn, ride on the back of a giant space turtle. novel, Raising Steam!. As follows the pattern he'd set with his late-era series, one of the three last books had to be a Moist Von Lipwig book, one following yet another of his exploits as he worked, at the Patrician's behest, improving another part of the city. 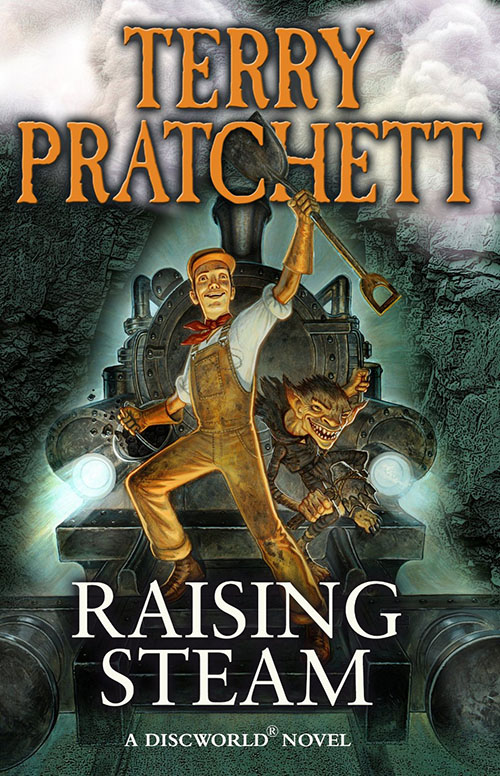 The twist this time, though, is that Moist isn't just changing the city but, really, changing the whole world. The book really pushes the Disc out of the Age of Reason, and the Regency, and straight into the depths of the Industrial Revolution, the Age of Steam. We're moving out of a time when wizards and warriors, dragons and barbarians are the main focus of the series, with a new dawn coming over the Disc. This is the age of the steam engine with the invention of the train.

The book opens not in Ankh-Morpork but out in the sticks where Dick Simnel (son of the previous Simnel we saw all the back in Reaper Man with his automatic thresher) has just invented the train. A very studious and exacting guy, the younger Simnel spent months working on his designs before even putting them to work (so as not to meet the fate his father eventually befell, that of the steam engine exploding and turning him into a fine pink mist). With his engine perfected he's come to the city to try and make money.

His first stop is at the offices of Harry King (who we saw before in previous Moist adventures, Going Postal! and Making Money!), the King of the Golden River (as he's known). Harry, being quite the businessman, already sees potential in the device, but he enlists the aid of Moist, the biggest salesman around, to help secure the train and start getting it out around the world. Moist takes it to the Patrician, and soon he's rushing off into the countryside, buying up land rights and negotiating deals, all to bring the train across the world.

Long term the goal is to get a railway set from the city all the way out to Uberwald, a journey that, by carriage, takes nearly a month to travel but could take as little as a couple of days once the train is set. Getting it there will be it's own task, of course, but when the Low King of the Dwarves is deposed, their throne stolen while they're abroad, the matter seems so much more pressing. The train has to be finished, the rails laid, and the plan set in motion to get the King back to his throne before weeks have passed, lest the balance of power in Uberwald, and the rest of the Disc, is thrown off.

Pratchett had big ambitions for this book, that's for sure, as this story is one of the longest and most involved in the series. Moist has a number of little adventures, from the discovery of the train to getting the first rails set out into the sticks, then to Quirm, before finally setting the big task of getting out to Uberwald. The renegade dwarves throw out their own issues, and then there's the big train trek to cap the novel. It's all a lot, and there's so much to keep up with the book has to fly to make it all happen (lest the novel reach the length of a Stephen King tome).

On the one hand I do enjoy how the Disc is evolving. This novel, feeling like a cap of so much of the series up until now, works in so many characters -- not just the goblins, but the Watch, the Wizards, denizens of Lancre, the Trolls, the Dwarves, and the citizens of Uberwald -- and it shows from everyone's perspective just how fast the world is moving as they all rush to keep up. It's a solid way to explore the world with this new technology being introduced, and the novel really does illustrate just how far the series has come since The Colour of Magic.

At the same time, though, the book is in such a rush to get through everything, to show the true evolution of the world and all the characters in it, that we never really get to spend a lot of time with the main characters of Moist, Dick, or Harry. We don't know that much about Dick or Harry and it would have been nice to get a lot more time with them, to really flesh them out beyond some tossed off facts while they stand around the train yard. It hurts Moist's world even more, though, and the characters around him. Most specifically we barely see anything of his wife, Adora Belle (aka Spike) who has been such a consequential character in the previous two books. She's sidelined here, and since she's such a fun character, one that can perfectly deflate the ego of our lead, the book really is missing something here.

That also leads to another big issues with Raising Steam!: for a novel set in the Discworld universe, it's not terrible funny. Sure, many of the books have had serious moments -- Vimes's battles with Carcer in Night Watch, Granny's efforts to get Eskarina into Unseen University in Equal Rites -- but by and large the books have always played with a light, deft touch, such that they easily all fit into the comedy genre. But Raising Steam!, while certainly adventurous, lacks much of the light humor that marked so much of the series.

If I had to guess, that's at least in party due to Pratchett's failing health at the time of this writing, which might have contributed to him not being able to spend as much time workshopping this novel as he would have liked. There are solid bones here, and a lot going on, but it's entirely possible this novel could have used another pass from Pratchett but he already had to move on to the next book (the final novel, The Shepherd's Crown) to get just one more done before he died.

Raising Steam! isn't a bad novel, and it's certainly got plenty of interesting moments to it. The novel just feels a tad incomplete, lacking that special spark that would have put it to the upper ranks of the series. It's good but not great, and maybe just needed a little more time in the hopper, time the author likely felt unable to give it.