What Makes a Being Who They Are?

The "Night Watch" books are my favorites in the DiscworldAt first blush, the Discworld series seems like just a parody of fantasy literature. Dig into any of the books, though, and you'll find deep and funny tales of a world just slightly off from our own. A world that, yes, is a flat disc carried through space on the backs of four elephants that, in turn, ride on the back of a giant space turtle. series, without a doubt. I know I'm not alone in these as I've talked to many other fans of the series and they're generally in agreement about this. Sure, we all have our personal favorite sub-series, from Death (who I also really like) to the Witches (who I don't), and even some who love Rincewind and his adventures (which I don't understand at all), but most readers also seem to have great affection for Commander Vimes and his bunch of men. Heck, even Pratchett was noted as commenting that he struggled whenever he put the Night Watch in his books because, very quickly, they wanted to take over and make the novel into a "Night's Watch" novel. 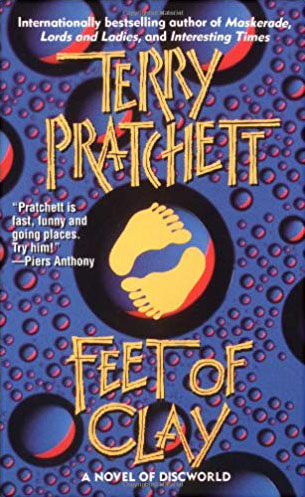 It's something about the characters, how well realized and detailed they are, with, of course, the core duo of Commander Vimes and Captain Carrot leading the way. These two are very different people but they each have a core that respects the rule of law. Well, really, the rule of justice and so long as the law lines up neatly with it they're just fine with that. When the law allows bad people to get away with bad things, that's when the problems happen, when Vimes and Carrot start to push against the walls they're trapped in and have to find a new solution to achieve true justice. And it's justice for all humans, and dwarves, and trolls, and anyone that can viewed as a sentient being (with even the under eventually making the cut).

But then there are the golems, a group that hasn't really been featured in Discworld before now. I think there were a few brief mentions of these creatures in the past, a reference here or there in previous books, but the golems were never really shown at all. That changes with Feet of Clay, a book dedicated to exploring the Golems, representation, and what it truly means to be alive. It's a lot of weight for the book to carry (and no pun intended since Golems are made of clay and very heavy), but the novel handles it with aplomb.

The novel opens with a murder. A kindly old priest was killed, his head bashed in, but what's really curious (beyond the fact that no one seemed to really want the priest dead, aside from whoever caved his head in) as the piece of paper stuck in his mouth (like a jaunty cigarette). The clues, such as they were, didn't really seem to add up -- the dead priest, the little note in his mouth, arsenic under his fingernails, and basic potting clay crumbled on the floor. What was going on and why did someone want to kill him? And then another body turns up, and then another. And then, seemingly unconnected, the Patrician starts getting sick, seemingly from arsenic poisoning. Vimes and his guards have to figure out who wants the Patrician dead, why, and how it all related to the dead bodies.

Somehow it all arrives at the Golems, the silent workforce of Ankh-Morpork, the clay automatons who work tirelessly, all day and all night, without need for food or rest. These clay beings have existed for centuries and will continue to go on living, slaves in nature but never viewed as alive. But what if the Golems really do have feelings, wants and desires, and what if they're tired of living under the thumbs of humans, of being ruled. Maybe one of them found it within themselves to kill. Could it be that the killer is a Golem? And if so, how does that tie back to the Patrician. It will take all the brainpower of the Watch to figure out this mystery and save the lives of the Patrician and everyone else who may be a target.

The mysteries in the "Night Watch" books have never been the draw for me in the series; instead, I've always cared more about the characters than the mystery at the center of these stories. That's mostly been because I've never felt the mysteries were all that great, and that's because the Discworld has always been more of a parody of fantasy literature, not mysteries. Sure, sometimes there are good twists and turns in the books, but most of the time the twists just kind of happen, on their own, without any reasoning behind it. Characters do what they want, how they want, and there's not always a build up for it.

Feet of Clay, though, definitely has a mystery worth paying attention to. it has clues, and clearly defined villains, and a way to link one to the other if you pay attention and pick up on the solutions. I part that's because this is one of the longer books in the series, allowing Pratchett to explore all the narrative ideas he had for this story. It also helps that this is one of his more focused novels, with clearly running parallel stories that tie together neatly, a plot (of a murder plot) that feels satisfying from start to finish without having to cheat to carry the mystery past the finish line.

But more than the mystery, this book is about Golems and here the novel really finds it's feet (pun also not intended). As beings that haven't really been shown before in these novels it seemed a little weird to me that we were suddenly getting new creatures thrown into the mix. While this could feel like a narrative cheat -- "sure, these guys didn't really exist before, but do you remember that?" -- the fact is that the Golems come out so well formed, so compellingly written, that they feel like they were major characters in the series up til now. The main focus of the book is Dorfl, the primary Golem we meet and learn about in this series. Golems can't talk, lacking functioning mouths in their clay, but despite this (or maybe because of it), Dorfl comes across as a deep, emotional, caring creature, one that you feel for, that you want to see gain his new lot in life and become more than just a slave for the system.

Maybe, though, Dorfl (and the rest of the Golems) are so compelling because we can view them as a stand-in for any downtrodden group. They're an underclass of society on the Disc, a group that is viewed as less-than-human because they aren't living creature but the strict tests of the living. And yet they care, and have feelings, so what makes them less sentient, less "human", than anyone else. It's a question raised within the Guards themselves as even the lycanthrope guard, Angua, hates golems (this despite her being "other" herself). What makes one group more or less "worthy" than another?

Naturally the book falls on the side of the Golems, making the case that anyone that is caring, that has a "soul" however you might define it, is worthy of being considered "alive" and thus deserves the same rights as anyone else. Pratchett took this view with all his characters, finding a way to the humanity in everyone, even his villains and monsters. He's visit this ground again in later books for the Orcs and then the Goblins, and in both cases you could clearly see Pratchett voicing his case for equality, no matter how different someone might be from ourselves. What mattered was that they were people, not what they looked like or how they were made.

But then Pratchett also uses another character in the book to make a similar point. Cherry, a dwarf introduced to the Watch in this book, has their own secret: they're a woman. It's a secret because dwarves don't normally go in for things like gender -- in their view, gender is something you quietly figure out among two consenting adults, but otherwise you don't talk about it. Every dwarf is a "man", no matter their gender, but Cheery wants to change things. She wants to be herself, a woman, and that means pushing against societal norms. She wants to be viewed as who she is and not "less than" just because she comes out. She's fighting her own fight, a fight the Golems more overtly illustrate, that you can be yourself and be free, no matter who you are.

The book agrees in both contexts, making the case for both of these characters, Cheery and Dorfl, as if there's no argument at all. The only people that say otherwise are the villains, but I don't think this is a flaw with the novel, really. Instead, the book gently pushes the readers into accepting trans-gender issues by coming at it from the side, working its way up to these weighty matters in a way that probably would lead even conservative types to accept Cheery without realize what they were accepting.

Of course, the case could be made that Cheery was always female and it's just a societal issue. But then, isn't that the case with trans women? Don't they feel like they've always been female even if their physical body didn't match? Cheery is a woman, whatever she may look like or be forced to show on her outside. Dorfl is alive no matter what society might say otherwise. These a being fighting for their rights and Ankh-Morpork changes for them. If only the real world were as understanding.