The Contract is Sealed

There is no question that while the "Night Watch" is my favorite DiscworldAt first blush, the Discworld series seems like just a parody of fantasy literature. Dig into any of the books, though, and you'll find deep and funny tales of a world just slightly off from our own. A world that, yes, is a flat disc carried through space on the backs of four elephants that, in turn, ride on the back of a giant space turtle. sub-series, Death is my favorite character in the run. One the author was past the first two books in the series (The Colour of Magic and The Light Fantastic), he started finding the voice for the character, such that the Death featured in Mort (two books later) bears little resemblance in personality to the Death at the start of the series. Of all the characters in the whole series, Death has grown and evolved to most, becoming, oddly, the warmest character in the run. 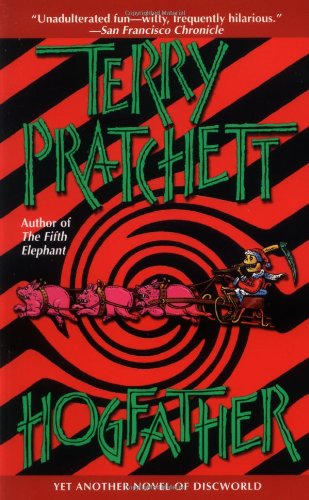 That's readily apparent in Hogfather, the fourth "Death" book in the series and the second to feature his granddaughter, Susan. Here, Death has to fill in for the Hogfather, the Disc's equivalent of Santa Claus, when "the fat man" goes missing. Death, of course, already knows what happened (and he knows because Death knows everything, being time with out time, beginning and end at once): the auditors of reality (nasty buggers first featured in Reaper Man) are back and they're trying, once again, to put some order to the chaos of the universe by removing humanity from the equation. Their plan is to kill the Hogfather so that, in essence, the sun does not rise, and the only way to stop it is for Death to (temporarily) become the Hogfather in his stead.

Of course, Death also ensures that Susan will not get involved. He does this by ensuring that the Death of Rats goes to Susan for assistance and then, when visiting the house Susan works in (as a governess), he explicitly tells her not to get involved. He knows her well enough to know this won't stop her, and will likely only encourage her. So she heads out to figure out what's really going on (since Death is mum on the matter), and she ends up teaming up with the Death of Rats, the Oh God of Hangovers (such a delightfully terrible pun), and eventually a tooth fairy, all so they can figure out what happened to the Hogfather, who is behind the disappearance, and how to bring him back.

There is a lot going on in Hogfather, with multiple plot lines all running concurrently, people zipping back and forth attempting to figure things out, and a whole lot of confusion. I mean, that's to be expected as this is a Discworld book and, more often than not, Pratchett loved to write his stories as if they were controlled chaos. That's how we get running plot lines about Death as the Hogfather, Susan on her quest to find the real Hogfather, the assassin who supposedly killed the Hogfather (an assassin named Teatime, pronounced Tee-Ah-Tim-Eh), and the Wizards of the Disc dealing with a sudden influx of free belief into the world. It's a lot all at once.

Honestly, it might almost be too much as, sometimes, the book gets a tad unfocused. Certainly the least essential of the storylines involves the Wizards. Because they're people with their foot firmly in the realm of magic, the Wizards are generally the first to notice when something weird is afoot. Here, with the Hogfather dead there's a lot of belief free floating in the world, which means new gods (little gods and big Gods) can be summoned into the world, and the Wizards keep accidentally summoning them, like a beast that eats dirty left socks, or a gnome that rips the hair off bald men, or a cheerfulness fairy sent to make everyone happier (to spectacularly bad results). The Wizards run around for a bit, and they do help to explain what's going on, but their part of the plot doesn't really resolve in any meaningful way, simply petering out as other characters take a lead role.

That's fine really, because Death and Susan need the spotlight for most of this story, obviously for different reasons. Susan is the one with the plot quest as she has to be the active agent to put things right. This is an actual requirement because, for all her shared powers with Death (the morpho-genetic traits shared through their "family line") Susan is very much human. She's not an anthropomorphic creation like Death -- no one imagines a Susan that takes care of special tasks of great belief and importance -- and thus the rules that contain Death (where he can go, what he can do) don't apply to Susan. She can go where she pleases, do as she needs to in pursuit of her quest. This makes her role key to the story even if she doesn't always understand why.

It's Death, though, that really steals the spotlight. Unlike in Soul Music, where Death was largely incidentally until the end of the story, the Grim Reaper here takes a lot of the pages in the book for his antics. And they really are antics, with Death learning about the holiday, figuring out how to be the best Hogfather he can be, dropping presents off at houses, pretending to be a mall Hogfather. These are all delightful scenes, and it's great to see Death in this role, being himself and getting everything wrong in hilarious fashion. It's a real treat.

Of course, the real driving force of the story is Teatime, the assassin hired to kill the Hogfather. He's a real piece of work, one of the most evil characters Pratchett ever wrote, and it's the kind of casual evil that shows the character has absolutely no regard for life in any capacity. It's a cold and dark evil masked by a friendly exterior that still, somehow, never manages to really be happy or nice. Teatime has plans beyond just killing the Hogfather, and as the story goes on, his whole plot comes into focus, and it's weird and messed up. And, of course, he kills a lot of people simply because he can (because they were there and he no longer had use for them).

Teatime makes a good villain for this story as he's one of the few mortal beings to go up against the Death family he feels like a real threat. Death has dealt with a lot of foes, from the auditors to another Death that was summoned back in Reaper Man, but Teatime is the first villain to actually feel like he might have a chance of besting Susan and eventually Death. The character raises the stakes nicely and manages to be real tension into the story, making us worry about our leads and what could happen to them. That's a solid bit of writing there from the author.

Hogfather is, in short, a solid book that manages to combine so many of Pratchett's best elements. It has his knack for parody, this time applied to Christmas, pair up with two of his best characters, Death and Susan, and a villain to really give them a run for their money. While I could live without the Wizard section of the story, I will admit they do at least make the concepts in the book a little more digestible. Hogfather is a solid story with some absolutely brilliant, hilarious moments, that comes together in a satisfying ending. There's a reason Death is my favorite character: he gets all the best books.