Throughout the DiscworldAt first blush, the Discworld series seems like just a parody of fantasy literature. Dig into any of the books, though, and you'll find deep and funny tales of a world just slightly off from our own. A world that, yes, is a flat disc carried through space on the backs of four elephants that, in turn, ride on the back of a giant space turtle. series, my favorite characters have, consistently, been the Night Watch. This group of officers, essentially the law for a land that has other people to take care of that (the Guilds take care of their own laws). It leaves them as a downtrodden lot that the rest of the governmental groups in Ankh Morpork look down upon. However, as we saw in the last book, Guards! Guards!, things were on thee up-tick for the Night Watch. They'd fought a dragon and saved the city, ensuring that the city went marching on into another bright future. 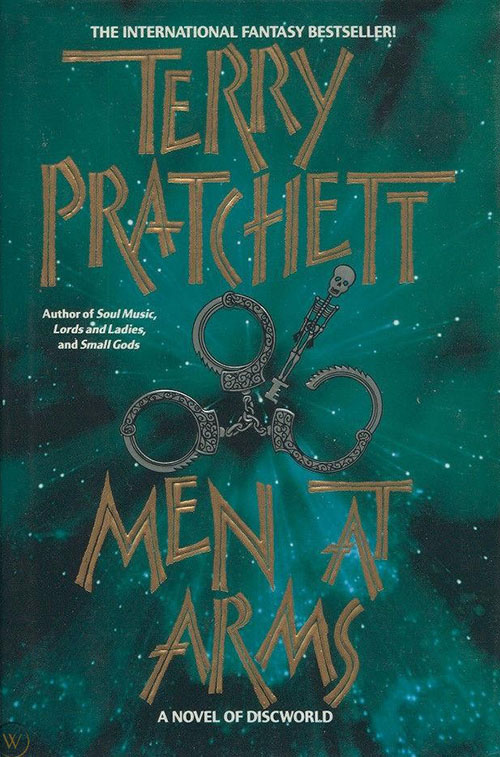 When we join up with the guards in Men at Arms, things have certainly progressed a bit. Carrot has been made a Corporal and has, quite effectively, inserted himself into the city, knowing basically everyone and becoming a reliable source for law and justice in the land. Vimes meanwhile, is preparing to retire into a life of luxury as he is engaged to Lady Sybil Ramkin, the lovely woman he met on his previous, dragon-fighting adventure. A bunch of new recruits have joined the Night Watch as well, with Cuddy (a dwarf), Detritus (a troll), and Angua (and woman... and more) rounding out the team. Plus, Colon and Nobby are... well, still themselves.

Things go pear-shaped, though, when a mysterious attacker start putting holes in people. Without a clue initially how its done (just the faint smell of fireworks left at the scene afterwards), the Night Watch have to figure out who is doing the deed and how. It's time for firearms to be introduced to the Disc, so here's hoping the guards are up to the task of hinting down a mad killer at range.

As with Guards! Guards!, the best part of Men at Arms is the characters. This crew is easily the most entertaining and charismatic batch of character Pratchett ever wrote in his series, fun and amusing while cynical enough to keep everything grounded. It's interesting, really, having characters like this in the book series because, unlike the witches or wizards or many of the other side characters we're explored so far, the Night Watch don't really have any special powers. Of the core four -- Vimes, Carrot, Nobby, and Colon -- the biggest super-power any of them have is that Carrot is likable and has an eidetic memory for the law. Beyond that, they're all just humans (or, in the case of Nobby, mostly human and he has a certificate to verify it). True, Angua, Cuddy, and Detritus add some fresh, non-human perspectives to the list (and the the case of Angua, who is secretly a werewolf, one new power) but they're all still the most grounded characters we're ever had in the series.

That's a good thing as murder via gun (or "gonne" as it's written in-world) is a very grounded (but still horrible) crime. Wizards and alchemists and the like might know how to handle dangers from other dimensions (sometimes of their own making), but to catch a sadistic madmen driven to kill for the sake of killing, you need people with their boots on the ground that can study the clues and think in very human terms. And, really, there's no one more real and human than Vimes. He's a cynical bastard (his words) and thinks the worst of everyone which means he doesn't pay attention to class or status or any of the things the guilds (and, really, the wizards too) worry about. If the clues lead somewhere he'll follow it, like a terrier (also his word) and chase down any suspect he has to. He's dogged, but he's human with a real, honest perspective.

Of the original group, Carrot is still my favorite character. As written, he continues to be simple, but simple isn't the same as stupid. He's not dumb in the least, he just thinks in direct, honest terms. When given an order that he's not allowed to arrest a suspect, only that he can talk to them, he'll tell the suspect, "my superior officer has given me an order, and I really don't want to do it. It's not good. So, please, just talk!" And it works. It's totally honest, colored in deception but only if you don't realize Carrot is 100% telling the truth. Its simplicity so simple it goes out the other side to complex again. It gives Carrot depth and shading that makes him into an even more complete character than he was before.

The new characters are also pretty great. being a dwarf and a troll, Cuddy and Detritus are at each others' throats in the beginning of the novel. That's because, of course, the Trolls and the Dwarves have had an acrimonious history since, well, the beginning of time (dwarves like the mine and there's nothing that annoys a troll more than a pickaxe into their back, and dwarves certainly don't like it when the rock they're breaking up suddenly rises and attacks). Naturally, then, Cuddy and Detritus are forced to work together (like any good buddy-cop setup), and they eventually form a pretty solid chemistry. Because of these two characters we get fresh perspectives on both the dwarves and the trolls and it helps to make both sides feel like real people and not just a simple collection of stereotypes.

Angua, I don't feel, gets nearly as much attention. It's good that the book introduces a female character into the mix but, as with Lady Sybil in the last book, Angua is almost immediately made into a love interest, this time for Carrot. And don't get me wrong, the love story between these two is pretty good, developed slowly over the course of the book with a satisfying conclusion. But it would have been nice to have a female character introduced into this group of men and not have her get married off, essentially, in the span of a single story. After it already happened with Sybil, I would have liked to see more here.

It does cloud her character since half her time is spent in relation to Carrot, and then, because of her status as a new Lance Constable, the rest of her story is basically following orders. Heck, when she's not following orders or the love interest for Carrot, she's in werewolf form fending off the interests of Gaspode the Talking Dog. She gets it from both species, which is pretty annoying. It'll be some time (another book or so) before she gets to go off and have her own adventures (and, sadly, she almost always one step away from Carrot on even the best of times).

The characters of the Watch help drive the book, and that's good because the actual mystery at the core of this story isn't all that great. There's plenty of twists and turn and adventure to be had, for sure, but the mystery is more red herrings than actual clues meaning that, by the end of the novel, there's been basically no chance to actually determine who the killer was. It's revealed, but that doesn't make it satisfying. It feels like a cop-out ending, a way to say "this is the killer" without necessarily having earned it through story. Everything about the killer is so obscured that you can't really know who the bad guy is until the last part of the last act of the novel when it's too late to really guess.

I wish the mystery was better because there's so much about the book that's great. All the characters are fun and interesting and they bounce well off each other. And, once Carrot gets to take the lead in the back half of the book, the story really starts humming along. The back half of this book is one of the zippiest reads in the series so far, so even if the mystery isn't great it doesn't really hurt the novel. I just can't help but think if the mystery were better, how much more interesting that would have made the conclusion of the novel.

Men at Arms is a solid follow up to Guards! Guards!, giving us a solid continuation of this group of characters and continuing their stories in satisfying ways. It'll just be a little while before the mysteries in these books become as good as the characters.