A Drag On the City

Here we go, now we're talking. While I do enjoy the previous books in the DiscworldAt first blush, the Discworld series seems like just a parody of fantasy literature. Dig into any of the books, though, and you'll find deep and funny tales of a world just slightly off from our own. A world that, yes, is a flat disc carried through space on the backs of four elephants that, in turn, ride on the back of a giant space turtle. series (especially Mort because Death is always a delight in the series), those books are feel like they're missing something. There's always something that keeps them from reaching greatness in one for or another. But then, that might just be because I've read through the whole series and know the heights it can get to. 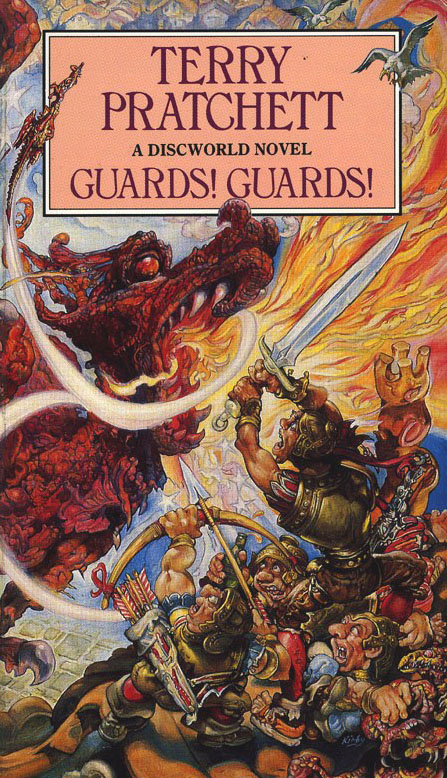 That, of course, leads us to Guards! Guards!, the point where the Discworld series really takes off. Although each of the previous books contained complete narratives (or, in the case of The Colour of Magic and The Light Fantastic, a completed, combined narrative), Guards! Guards! is a fully realized novel without the niggling flaws some of the other books had. There's a through-line story for the novel as well as growth for each of the main characters. It's a complete narrative in a way the previous books never quite achieved.

In Guards! Guards! we're introduced to Captain Sam Vimes, leader of the Ankh Morpork Night Watch and full-time drunk. While we'd had notes in the previous books about the "City Watch", this is the first book to actually introduce them as characters, and that might be because the Watch is a joke. Due to the way the Patrician engineered the machinations of the city, the various Guilds were all essentially responsible for policing themselves; policemen were largely unneeded in that arrangement and, over the years, the watch had dwindled until the night shift was only the drunken Vimes, career middling officer Sgt. Fed Colon, and questionable human being Cpl. Nobby Nobbs (questionable as in he's the only human in Ankh Morpork required to carry a card declaring that, yes, he's human). These are the men patrolling the streets of the city at night, very quietly proclaiming that "all is well," usually quietly so no one put it to the test.

This probably would have remained the status quo for the Night Watch if two events hadn't occurred to change matters. First, the Night Watch gained a new recruit: Carrot, a hulking beef of a man (and just as innocently naive) who was raised by Dwarves (and until recently, thought he was a Dwarf, all evidence to the contrary). Carrot was a volunteer for the job, traveling into town from high in the mountains, keen for the work and a need to uphold all

The most important part about Guards! Guards! is the way it fleshes out Ankh Morpork as a city. The city had shown up in multiple books before, but simply as a backdrop. Sure, we'd been told about Unseen University, been shown the Broken Drum tavern, and explored a couple of guild halls briefly, but those were always as a setting. Guards! Guards! treat Ankh Morpork as a character, giving the city (and her population) substance and style. It adds a necessary richness to the city that, before now, it lacked. There's a reason the books focus so much on Ankh Morpork, making it a capital of the world, essentially, and it's from this book that status really grows.

To the same measure, too, Guards! Guards! really begins to flesh out the Patrician. In the few times he'd been glimpsed before (in a brief scene in The Color of Magic and then again in Sourcery where he was, temporarily, turned into a lizard) we were told that the Patrician was a master manipulator. Here, though, we truly get to see his mind in action, watching him pit the various factions of the city against each other. There are also glimpses deep into how he thinks, and this is where you can see how Pratchett plotted out the character, having him not only eight steps ahead in the chess match, but playing an entirely different (and more complex) game over top. The Patrician is a key part of the story of Ankh Morpork, and that's thanks to Guards! Guards!.

But then, this book really is about two characters more than any other: Sam Vimes and Carrot Ironfounderson. Sam essentially runs as the lead character, running the investigation into the dragon. He's the one to initiate the case (despite the Patrician, and his own better instincts, telling him otherwise). He follows it, doggedly, not because a dragon has to be stopped (that's a job for heroes, as Vimes clearly states at one point). No, he pursues the case because the dragon came into his city and that's a bridge too far for a copper. Commit crimes in someone else jurisdiction all you want, but once you come into his city, Sam Vimes has to follow the case. Vimes gets his start here, and while he grows over the course of his future books, that dogged determination is a core to his character from the beginning.

Plus we also get to see him grow a personal life as well as a professional one. This is a change for the protagonists of the the books in the series; before now the "heroes" (a term we have to use loosely in the case of Rincewind) were all focused on their tasks. Rincewind had to run, the witches were focused on their magic and their territory, and even Teppic in Pyramids was more concerned with his position as King and the lands he ruled than on finding any kind of personal life outside of his job. Even when the characters had personal pursuits (like a brief love story for Magrat in Wyrd Sisters) it was secondary for the plot, not a primary focus. Here, though, Sam strikes up a kind of romance with Lady Sybil Ramkin, last heir to her noble line.

Not only is she a love interest for Sam, Sybil is also the preeminent expert on dragons in Ankh Morpork. Their love story develops slowly over the course of the book and while she has professional obligations to the story (which makes her a vital character as much as any of the men) Sybil also gets to have a personal story with Sam. Their plot line never feels secondary (in fact, the book ends with a scene of the two of them) which in turn allows us to finally bond with a protagonist in these books in a real, personal way.

As much as I like Sam, I enjoy Carrot even more. Carrot is never a focus in this book, always more of a cudgel used to break situations wide open, but his character does it so well. Given a book of the laws and rules of the city, Carrot dives in, memorizing each and every law and rule perfectly (including ever note, number, and special character) which he can then recite, from memory, perfectly. He's also big and brawny but with a heart of gold. When given a task he takes the most direct (and literal) path but he does it all in the name of protecting his city. Sam has a copper's instinct to protect Ankh Morpork, but Carrot treats it like a sacred duty. Plus, even in this book, it's hinted that Carrot's innocence may hide a calculating mind below, one that uses his naivety as a mask, a tool to be used.

There is so much to like about this book. It has depth and substance that many of the prior books lacked. Everything up until now has been fun ad funny to be sure, but it's with Guards! Guards! that the series becomes more than just a parody of what came before. With this book, Discworld matures into a real living, breathing world. For anyone new to the series, this is really the best book to start with. It's a solid entry and show the promise of what's the come for the series.