Dwarves and Trolls Just Can't Get Along, Man

Through the long line of DiscworldAt first blush, the Discworld series seems like just a parody of fantasy literature. Dig into any of the books, though, and you'll find deep and funny tales of a world just slightly off from our own. A world that, yes, is a flat disc carried through space on the backs of four elephants that, in turn, ride on the back of a giant space turtle. books, one thing has been pretty consistent: dwarves and trolls have, historically, not gotten along. It's easy to see why: the dwarves like to mine rocks and trolls are made of rock, and no one likes it when (a) a short creature starts hitting you with a pickax or (b) the thing you're mining suddenly standing on and smashing a fist into your head. Thus, for centuries, the two sides have been at each others' collective throats. 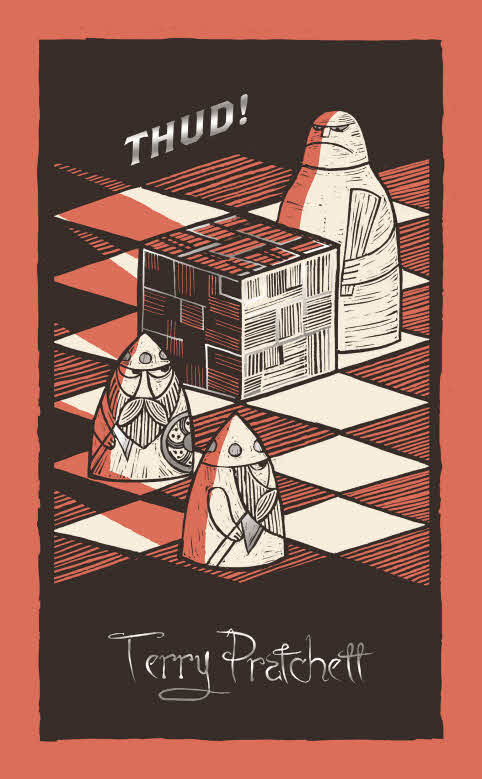 Except, things clearly have been shifting since, even back in the second "Night Watch" book, Men at Arms, the two races have slowly been getting less and less angry with each other. Two of the guards found a way to be friends there, and over time more and more trolls and dwarves joined the Watch, treating each other with respect and trust. Sure, as later books showed, sometimes the two sides were still bickering, an acrimony fueled by the Deep Down Dwarves and their conservative viewpoints (see: The Fifth Elephant), but it seemed like things were finally mending.

That's what makes the setup for this next "Watch" book (and, technically, the last of the Discworld novels to feature the full collection of Watch characters) so odd: after all the progress the races have made, the animosity is back once again, and it's once more fueled by the Deep Downers, the ultra-conservatives of dwarven society. In Thud! we're reminded of Koom Valley, the battle, centuries ago, when the dwarves ambushed the trolls, or the trolls ambushed the dwarves, or they both ambushed each other. Whatever the case, Koom Valley went on to be a flash-point for the two cultures, with several more battles being fought over the years since, all at that same damned valley.

It's now the anniversary of that battle and, once again, tensions are high between the dwarves and the trolls. The peace is hard to maintain in Ankh-Morpork, as Commander Vimes notes, and as the day of Koom Valley gets closer and closer, trolls and dwarves continue leaving the Watch, each going back to their sides of the divide so they can fight the battle once more (and this time on the streets of the city, not just at a valley). Worse, in the midst of all this, a troll apparently broke into a Deep Down mine under the city and, in the process, killed a dwarf. Both sides blame the other and the Watch is sucked into the middle of it all. Can they solve the murder mystery and keep the peace? And is there more going on with both factions? Only Vimes will be able to find out.

I'm a huge fan of the Watch books, with this sub-series within the collection of Discworld novels being among my favorites (with, only recently, the Tiffany Aching novels coming in as a close second). But, going back through and reading all of these novels again, in order, I've realized that a number of the Watch books are rather flawed, and Thud! is no exception. While I like where the novel eventually leads -- a final, proper release of tensions between the dwarves and trolls -- I don't feel like the novel really does justice to the story its trying to tell or all the pieces it puts in place to get there.

The Watch books have, by and large, been treated as a series of mysteries (usually murder mysteries), and the setup for this novel is no exception. Against the backdrop of Koom Valley, Vimes and his team have to solve a murder. I like that in concept -- Vimes slowly putting together the clues and bringing the mystery together works when the novels pull it off just right -- but for a plot line like this to function there have to be enough clues to make the mystery solvable for a reader and that's where the novel falls apart. There's so much history between the dwarves and the trolls, let along so many new concepts introduced in this book, that trying to put together the mystery from Vimes's perspective (the only real perspective we get) is impossible. Yes, the conclusion makes sense, but the novel basically has to outline it for us at the end.

On top of that, the Deep Down dwarves just aren't an effective villain. They'd already been used once, in The Fifth Elephant, and their scheme that time had been shut down. Coming back and using them again here feels like a retread; there's nothing new or fresh about them as villains, and it's pretty obvious (from what we saw of them the previous time) that nothing they say or do can be trusted. The fact that, in the end, they're the bad guys (and it wasn't all a clever misdirect) means there really isn't much mystery in that regard. Yes, you don't understand the What or Why or How of the mystery, but the Who of it all is never really in question.

There are some elements brought in here that I do like, mind you. To compliment the Low King of the Dwarves introduced in the last Watch book (and character I rather liked for the few brief moments we got with them) Thud! brings in Mr. Shine (Him Diamond!), the kind of the trolls. Trolls are generally depicted as dumb creatures in the city, stupid not by design but because their silicon brains suffer in the heat (if the city were up in the cold air of the mountains, the trolls would be the smartest beings in the setting), but Mr. Shine, due to the fact that he's made of diamond, can regulate his heat and think intelligently and clearly. He adds a new perspective to troll society and gives us a fresh viewpoint that the trolls needed. He's a solid character (no pun intended), and my only complaint is that I really wish he'd been introduced earlier in the series.

Then there's Sally (full name Salacia von Humpeding), the newest recruit in the Watch who also happens to be a vampire. While vampires have existed in the series for a few books now (I think Reaper Man was the first to mention vampires on the Disc), the largest exploration of them as characters was in Carpe Jugulum where they were the villains. Here we finally get a vampire in a heroic role (and not as a side character, like Otto in The Truth) and this adds yet another fresh perspective to the novel. Vampires on the Disc are interesting, especially the "Black Ribboners" that don't drink blood, and I'm glad we finally get a character that can present her perspective for exploration.

Again, though, I wish Sally had been introduced in an earlier book so we could have learned more about her and gotten this perspective sooner. This, really, is an issue with much of the book: due the fact that, knowing now, there are only so many books left in the series its hard to see new characters like these introduced and not think, "well, its great we have them but we really won't get any more time to explore them. This is it." If the series went on for another twenty novels and Sally went on to have her own adventures, or we had a novel set in troll society so we could learn more about Mr. Shine, that would have been great. This is a solid introduction for each of them, but there won't be any more after this.

Thud! is hobbled under the weight of introducing so many ideas, layering so many plot lines on, and trying to do so much that, at times, it feels like a real mess. It's readable enough, powered of course by Pratchett's humor and delightful prose, but it's certainly one of the weaker books in the Watch series, let only the whole of the Discworld cycle. Pratchett tried to do a lot here but Thud! is just too overstuffed to be able to capitalize properly on everything introduced here. And then, due to when the series ends because of the author's own death, there just isn't any chance for more growth from this point forward. Another novel for the whole Watch, set after this book that let the characters grow more, probably would have let this story breathe and show evolution after the fact. Sadly that just never was going to happen.