Discworld Book 1: The Colour of Magic

I like books, but (as should be obvious from how much I watch) movies have always been my favorite way to relax. I'm not a fast reader so if I want to get into a story, enjoy it, and then move on, books haven't been a big a draw for me as the ease of cinema. I do read regularly, usually in the evenings before hitting the sack as a way to relax my brain, but they aren't my focus. 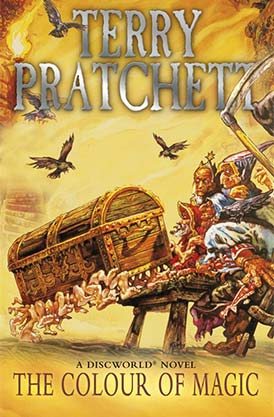 Still, I do tend to keep an eye out for any series that can catch me. I don't like just picking up random books from a shelf, I want some kind of pre-built assurance that I can get into a series. If I like an author and enjoy a book from them I want to then be able to pick up every book from that author or a specific series they've written and really dive deep. It's the reason I spent so much of my youth reading Stephen King since that author has written a metric crap-ton of books. Of course I then outgrew his books (as I started getting too used to his very formulaic writing) and I had to find new authors to catch my fancy.

That was how I ended up reading the DiscworldAt first blush, the Discworld series seems like just a parody of fantasy literature. Dig into any of the books, though, and you'll find deep and funny tales of a world just slightly off from our own. A world that, yes, is a flat disc carried through space on the backs of four elephants that, in turn, ride on the back of a giant space turtle. series: I needed something new to read, someone suggested checking out the series, and when I saw there were 20-plus books in the run, I figured it was worth a quick peek to see how the series shook out. And, of course, I absolutely devoured the first book I read in the run and went back to read everything else I could.

Now, admittedly, The Colour of Magic wasn't the first book in the series I ever read; that would be Carpe Jugulum, a pretty decent book from later in the run that featured witches and vampires (it was the vampires, naturally enough, that caught my attention). But even before that, I'd tooled around with a friend in the first of the Discworld point-and-click adventure games (he rented it from Blockbuster and we had a fun weekend trying, and failing, to get through the game on his PlayStation). I had enough of a knowledge of the world going in to The Colour of Magic that I knew kind of what to expect.

It's good I'd spent some time in Discworld before reading this book, though, because this first novel is pretty rough. It's good, and it's funny, but it's not nearly as well formed of a narrative as later novels in the series. While the books down the road will tell single, focused adventures usually based around a single setting (two or three plot lines that all twist and converge on a big finale), The Colour of Magic is more episodic, short adventure tales following the main character, Rincewind, as he tried (and often fails) to avoid whatever danger is lurking in each location.

The strange construction is by design, of course, as this novel is really a travelogue to explore, and setup, the world. In the story we are first introduced to Rincewind, a wizard who has no magical abilities of any kind. Kicked out of Unseen University for being bloody worthless at wizarding (and also for getting one of the eight forbidden spells stuck in his head, never to be seen, or used, again), Rincewind has been bumming around his home town, (the largest city on the disc) Anhk Morpork, picking up odd jobs where he could. That's how he's introduced to Twoflower, the disc's first-ever tourist. Twoflower wants to see the world and all its miraculous dangers, and he has plenty of money to pay for it all. So Rincewind takes on the job and then the two are immediately set upon by bandits. Then they run to a new location, and have to deal with barbarians, and dragons, and insane civilizations that want to throw the heroes off the edge of the disc. In short, it's Twoflower's greatest vacation.

As a book setting up all the strange and wonderful sights of the disc, The Colour of Magic is a pretty decent read. Because each section is fairly short (like a collection of novellas stitched together with a couple of common protagonists) none of them ever drag on or outstay their welcome. By the time one each of the disc has been explored well enough, the heroes have run off, ready to get sucked into a different adventure (at least one of them wants nothing to do with).

And yet, that strength of the book is also it's weakness. Taken on its own the book is great, but once you've read through the series and then come back this book hardly resembled the well-built and detailed world we're used to. Most of the places Rincewind travels to are never seen again, and even those areas that appear time and again in later books (like Anhk Morpork) feel very different here than in the later novels. The Colour of Magic very much feels like a first draft of the world, a novel to read once to see if you like Pratchett's style of writing before you move on, in the process removing this book from your head-canon entirely.

That's another issue with the book, of course: it's very easy to ignore everything that happens here as none of it will have consequence in later novels. Beyond Rincewind, who pops up in a number of books down the road, and Twoflower, who shows up once more, there no one that will show up down the road. Every character we meet here is a one-off to fill a space in the novel but they won't have any real bearing on this story or future novels. Once Rincewind and Twoflower run away from a character, you can bet we'll never see them again. Ever. It's hard to care about any of the side characters the first time you read the book; by the time you're going back through it becomes all but impossible to care at all.

And then there's Rincewind. Oh, Rincewind. As a side character to add some colour, Rincewind can be pretty funny. He has two traits: the inability to actually cast magic (a fatal flaw for a wizard) and a preternatural, subconscious ability to sense danger and flee from it. As he states, "the point is now where you're running towards. It's what you're running away from." The jokes made from him, and about him, are pretty solid. Unfortunately he's not a great character to build a book around and it'll be awhile before the author figures this out.

I can understand the desire to make Rincewind the hero: he's the exact opposite of the heroes from classical fantasy (especially the barbarian tales Pratchett was apparently spoofing in this first book). As a joke he's amusing, but he's also shallow with very few redeeming qualities to him. He's a drag on this book, hindering it instead of elevating it.

Thankfully, Pratchett's prose helped to make up for a lot of this. He was a very funny author and even in this first book his writing shines. He prose is witty, constructing elaborate jokes along with puns and asides that make every passage delightful to read. What's especially great is that the humor is there to accent the story without distracting from it. There's never a moment where the characters effectively turn towards the reader to spell out a joke or riff on a line in a mugging kind of way. The humor comes (sometimes in the footnotes) and moves along just as quickly so the reader can get to the next scene, the next gag, and the next amusing moment. It's very well constructed.

The Colour of Magic is an enjoyable one-off for the eventual series. If you're a first time reader you'll delight in the strange new world to explore. Just bear in mind that this is probably the hardest book to get back to once you're read more of the series; it's a good read, but it's also easily my least favorite novel in the series. Thankfully, things pick up even in this books direct sequel, The Light Fantastic...