Double, Double, Toil and... Something...

Considering how much I enjoy the DiscworldAt first blush, the Discworld series seems like just a parody of fantasy literature. Dig into any of the books, though, and you'll find deep and funny tales of a world just slightly off from our own. A world that, yes, is a flat disc carried through space on the backs of four elephants that, in turn, ride on the back of a giant space turtle. series, I do have to admit that it gets off to a bit of a slow start. While the wizards and witches are very well explored early on, so many of the characters we come to know and love (such as the Night Watch and Death's Grand-Daughter) aren't even glimpsed in these early books. Even Ankh Morpork, a fixture of most books of the run, is barely explored at all in the early volumes. 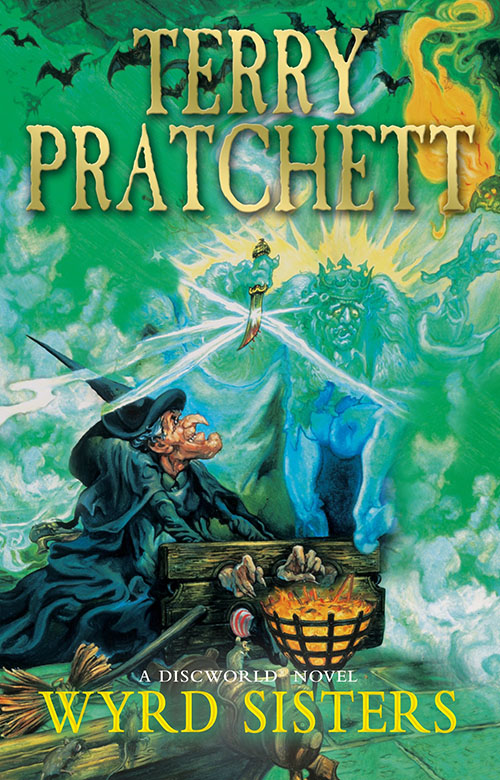 Not that this books is going to change that just yet. That said, it does at least give better focus to one section of the disc, setting up characters and situations that will reverberate through the series. Likely you remember my commenting in the various wizard-focused books (The Colour of Magic, The Light Fantastic, and Sourcery) that the books still don't give us a clear idea of how wizards are truly organized. While that's going to hold true for some time yet, Wyrd Sisters at least does a good job of setting the outline for how the witches are organized.

Or, to be more accurate, how they aren't organized. As we see at the start of the book, three witches -- Granny Weatherwax (co -star of Equal Rites), Nanny Ogg, and Magrat Garlick -- are meeting for their monthly coven. It's an informal affair thrown together by the youngest of the three, Magrat, all because she feels witches need to meet and have regular coven discussions. The two older witches, though, only go along with it because it's a good time to have tea and biscuits. Witches, as they establish, don't really like meeting up -- two witches meeting is like two ill-tempered cats meeting, with all the scratching, hissing, and pulled hair that entails. Witches prefer to remain solitary, only coming together when absolutely necessary.

And then the old King of their kingdom, Verence of Lancre, dies. Everyone assumes it's at the hands of his cousin, Duke Felmet, but that's right and good since being a king means having other heirs to the throne fighting for position beneath you (and often literally stabbing you in the back for your throne). However, the Baron wants his claim to seem legitimate and doesn't like any talk about how the old King might have died. Since the witches don't respect his authority (since they don't respect any authority ever), he views them as a threat to his throne. This begins a war of words and lies between the Baron and the witches as they work to stop him from taking the throne (and establish a different heir instead) while he does everything he can to turn the countryside against the coven.

While the first few Discworld books were about parodying barbarian stories and basic fantasy novels, Wyrd Sisters looks for different material to parody: the novel is a play on the oeuvre of William Shakespeare, most specifically Macbeth. Obviously the witches themselves are a direct reference, paralleling the three witches from the original play (although with a nicer demeanor and and more altruistic reasons for getting involved). The Baron is another parallel, half Macbeth (since he killed his cousin for the throne) and half Lady Macbeth (always trying to wash the blood from his hands but unable to do so). It's an antagonistic relationship between the two sides, although the witches take a more active hand in the play and, really, are the primary figures of the story.

Looked at another way, there are similarities between Wyrd Sisters and Rosencrantz and Guildenstern are Dead (well, or Rosencrantz and Guildenstern, both of which are parodies of Shakespeare's Hamlet). In both cases, we see a new perspective on the play (or a parallel retelling thereof) with out main characters bouncing around outside the events of the story, catching only snippets relevant to their own through-line. Of course, by making it more a parallel story than a straight parody, Pratchett's is able to explore more of the world around the witches while also throwing in his own artistic touches (several appearances by Death, a bit of time in Ankh Morpork, and a play-within-a-story) to spice up the proceedings.

Although Macbeth is plot of this novel, it's not the real focus. That remains on the witches: who they are and what they want? For the most part the latter answer is simply, "to be left alone". Witches respect nature and, because of that, swear not to meddle in the affairs of man. They strive to keep a balance in the world and know, full well, the second they start to "take an interest" they'll meddle all the time. Each change will lead to a new change, and then another to follow. Soon enough they'd be running the place, three evil witches forcing everyone to do their bidding (and, as they note in the book, that way leads to "cackling," the laugh of an evil witch when they're plotting mischief). Witches can, too easily, fall into that trap which is why they refuse to meddle. Much of the book, in fact, is the witches toeing that line, trying not to get sucked in too deep into the story.

It's an interesting dynamic for the book, especially when viewed from the context of Macbeth. There, the witches appear in the first scenes of the play, ready with a magic spell and a prophetic word. They are, clearly, evil witches ready to meddle. And sure, maybe in the end the results are the same, with the evil royal depose one way or the other, but the action of Wyrd Sisters is seeing them try to keep their sanity (and not "cackle") while they work to save the kingdom from a clearly evil man. The Macbeth witches don't care while, clearly, the Wyrd Sisters care too much.

That's what really shows the dynamic of the witches moving forward. As we see more of them, and other witches as well, we learn that witches really don't work together not out of hate (although they certainly don't like anyone telling them what to do, even other witches) but because when you get two or more witches together, they start to get ideas. They can feed on each other, harness their powers together, and before too long they're meddling. Black cats and gingerbread houses are sure to follow after that.

While I enjoy the previous books in the series for their simple pleasures, Wyrd Sisters is the first book in the series that really feels like a true Discworld book. It shakes off the need to play in the basic ground well-trodden by barbarian tales and fantasy stories and starts to find its own groove. It's interesting that series does this by first parodying Shakespeare, but this first easy step is an indicator to that first novels of the Discworld will soon be shoved aside as (it's put in the next books) the series moves into the "Century of the Fruit Bat." The novels are growing, and it's exciting to see where they go from here.