Death is a constant character in the DiscworldAt first blush, the Discworld series seems like just a parody of fantasy literature. Dig into any of the books, though, and you'll find deep and funny tales of a world just slightly off from our own. A world that, yes, is a flat disc carried through space on the backs of four elephants that, in turn, ride on the back of a giant space turtle. series. Although rarely the focus of the story, Mort being the one book to look at the world of Death in detail so far, Death has still manage to become a well-crafted, detailed character in his brief appearances. That's interesting in and of itself since in his first appearance in The Colour of Magic, Death was more of an antagonist for Rincewind, less a shaded character than just a bad guy to chase the hero once in a while. 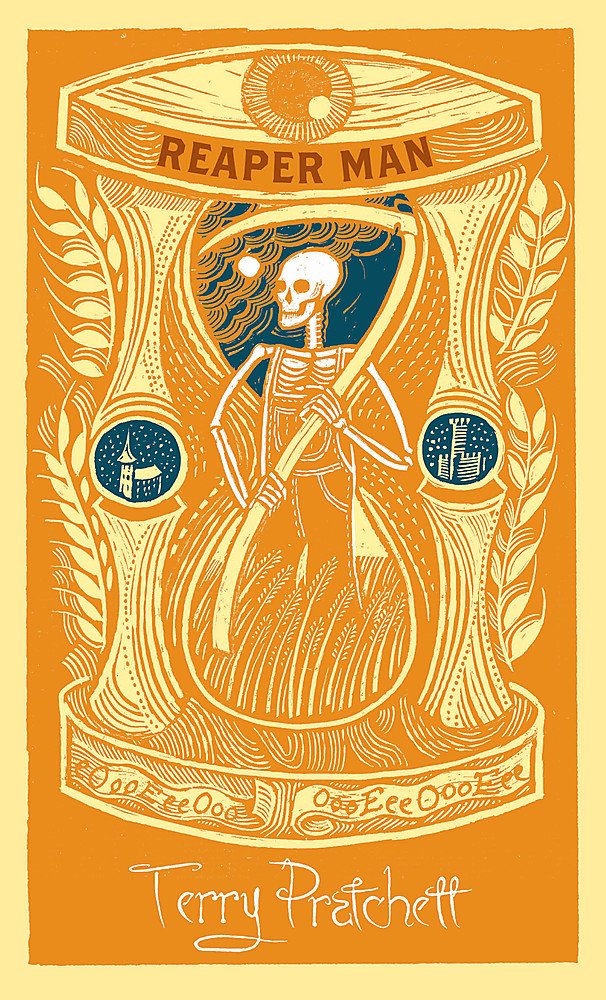 Obviously a character like that can only stay a black-and-white villain for so long and, as he showed up time and again, Death evolved, becoming more of a general force of human passing, not unkind but always inevitable. It was inevitable, really, as no character can show up time and again without gaining some kind of nuance. Of course, the book that really fleshed out Death and gave him the character we truly know -- that of the Reaper Man that will show up when people die to gently, and again no unkindly, usher them off to the afterlife -- was Mort. That book recast Death, and character that up until now had been unfeeling, a force without emotion or soul, into the role of a doting teacher and (in his own way) kindly father. Once that book fleshed out Death, his character could never go back to its old ways.

Death has shown up in every book so far that we've looked at (and, will appear in every Discworld book in the series, save one), but it would take another seven books for us to once again explore Death and his own personal journey. Reaper Man, the 11th book in the series, posits the idea that Death has become too invested in the lives and the world of the humans, that he's somehow ill-equipped to do his job and has to be replaced. Death is retired, given a gold lifetimer, and sent out to live the rest of his life among the people. Meanwhile a new crop of Deaths will appear, one per species, to pick up where Death left off. This leaves a period where the world is without any Deaths to handle all the people dying, and life energy begins to build up. This causes it's own issues that could lead to a new threat upon the existence of the Discworld.

I like Reaper Man a lot, and it's all because of Death. Honestly after his first couple of appearances, once his character started to settle down and he had his own book (Mort, which is really about Death's apprentice, but Death is the main draw), Death became my favorite character in the series. The Death-focused portions of Reaper Man are some of its best giving us time to enjoy Death settling into life as a mortal and learning what it truly means to be one of the "people". For someone that is endless, timeless, and always present at every where and every when simultaneously, being a single, linear mortal is quite the adjustment for Death. The book mines its best humor out of Death's story.

There's also a solid bit of world building around Death with the establishment of the Auditors of Reality. These figures (who are basically floating grey robes without any other substance to them) keep track of the universe ensuring it stays orderly and operational. While this might sound like a good thing, the Auditors are actually the antagonists of the book because they don't understand that the universe cannot operate at peak efficiency -- simply by having humans in it, the universe will always be a disordered, chaotic mess. Death understands this and appreciates this basic fact about humanity. So, as the book goes on, Death actively works to thwart the auditors at all costs. And, because they're such effective villains here, we'll see them again in later books in the series.

Unfortunately, despite the title of the book being "Reaper Man", much of the story isn't actually about Death and his adventure in mortality. Instead, a solid two-thirds of the book actually serves as a sequel (of sorts) to the previous novel, Moving Pictures. That novel liberally features the wizards of Unseen University, and we're back with them for a large chunk of Reaper Man. Specifically, the focus is on Windle Poons, the oldest member of the UU and, within a few pages of the novel, a very dead man. Unfortunately, due to Death's forced retirement, there's no one to reap Windle's soul so the poor Wizard eventually settles back into his dead body and becomes a zombie in search of meaning in his afterlife.

On it's own I don't hate this storyline. Exploring a world where death ceases to happen and the "dead" have to find something else to do with this afterlives is interesting. Some sequences, like Windle joining an afterlife support group with a bashful bogeyman, a mumbling banshee, and a reverse werewolf (a wolf who, three days of the month, becomes a wolfman) allow us to explore the world of the undead in interesting ways. Heck, it even introduced Reg Shoes, zombie rights activist (and zombie himself), an amusingly crafted character who will continue to live on in later books.

Windle's story, though, gets muddled up with an Ankh Morpork tale about an alien entity feeding off the excess life force to try and gain a toehold on the Discworld. It does this by first populating the world with its eggs -- snow globes -- that hatch into drones -- wire shopping carts -- before giving rise to its massive edifice -- a shopping mall. I get that this is supposed to be some kind of comment on mass consumerism and, in the right context it could somehow work on that level. It just never feels like this storyline ties in well to everything else going on in the book. This is especially the case as Death never once crosses into this storyline (as he's off on a different part of the disc dealing with his own troubles), making me wonder why it was even in a book titled "Reaper Man".

The shopping mall story is one thing -- it's half-baked and never really seem to amount to anything. It's certainly not an effective villain as the mall is never a character so much as a weird edifice the wizards just get trapped inside and have to escape -- but it also is indicative of the bigger issue with Reaper Man: it's very disjointed. Other books in the series have had their narrative diversions and A-plot/B-plot setup, such as the Rincewind/Wizards plots in Sourcery, the Night Watch/dragon-summoning Brethren in Guards! Guards!, and Rincewind/the Demons in Eric, but in each of these cases the stories eventually tie together at the climax. Reaper Man doesn't have this same build up; it has divergent tales that never unite.

Despite this, though, I do still really enjoy the book. I like specific moments with Windle enough that I feel they redeem his rather shaggy storyline. And, of course, I enjoy every minute of Death. Death being mortal is great, and then Death going on a quest to regain his Death-ness is also solid. Plus we eventually get a new character to add to Death's ranks, the Death of Rats (aka "The Grim Squeaker"), and he's amazing. So while this might be one of the messier Discworld novels, it's still at times deeply satisfying. Maybe not among the best books in the series but still very good.