But They're So Pretty!

I think I've been pretty open at this point that the DiscworldAt first blush, the Discworld series seems like just a parody of fantasy literature. Dig into any of the books, though, and you'll find deep and funny tales of a world just slightly off from our own. A world that, yes, is a flat disc carried through space on the backs of four elephants that, in turn, ride on the back of a giant space turtle. Witches are not my favorite characters. While they certainly have their moments -- Nanny Ogg's sassy horn dog shtick can be pretty funny, and when she gets going I can appreciate Granny Weatherwax's cut-through-the-bullshit attitude. On the whole, though, I've never really been able to get into their stories. Something about the way the characters interact with each other -- catty and mean and, most of the time, getting in their own way -- really bothers me. I know the Witches have their fans, but the early books featuring the trio of Granny, Nanny, and Magrat never thrilled me. 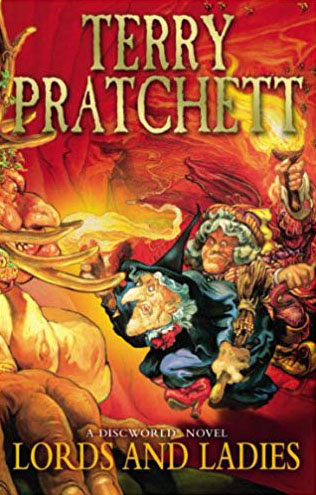 Of course that might have been, in part, because my favorite character from the early Witches books, Eskarina from Equal Rites, essentially disappears from the series after her first book (only showing up for a cameo much deeper into the run). Esk was an interesting character, a witch that also could be a wizard, who had all the headstrong qualities of Granny but wasn't yet so set in her ways that she couldn't learn and evolve, so it was a pity to basically lose her after her first appearance. In her place we got a trio of characters that were fun at times but never as interesting for me.

That's especially true in their first novels together: Wyrd Sisters was a Hamlet riff that felt like it took too long to get going, more setup than action; and Witches Abroad felt like a half-baked book and fairy tales that ended right as it finally started to get interesting. So the thought of going in for a third dive with the three ladies didn't exactly thrill me. I wasn't really in the mood for another undercooked adventure starring the Witches (even if the "worst" Discworld book is still a fun and enjoyable read). But I set out to do all these books in order, to watch the world evolve as the novels came out, so I had to read Lords and Ladies simply because of the momentum of the project.

With Lords and Ladies, though, a few of my major issues with the Witches sub-series actually get addressed, making this the first of the Witches books I've really enjoyed. A lot of that has to do with the fact that this book feels like a proper, complete story, one that isn't just a riff on other, external material. While parodies of Shakespeare and fairy tales are fun, it never felt like enough to base an entire novel. Even this novel has its allusions to Shakespeare, specifically A Midsummer Night's Dream (all because this book features fairies), but that's just a wink and nod and not the whole basis for the story. This novel feels complete in a way the previous Witches books were not.

In the novel, the trio of witches have just returned from their journey across the Disc (in Witches Abroad, making this one of the few direct sequels in the Discworld canon, by author Terry Pratchett's own admission) and, by and large, want to get back to their old lives; being out in the world was nice, but there's nothing like the chores at home. Trouble starts brewing almost immediately, though, when Magrat meets up with her beau, King Verance. Expecting a proper courtship (since they two had been making awkward moon-eyes at each other for a while), instead she finds that Verance has already setup a wedding day, ceremony all arranged, set for a short while hence. Worse, having found a note that Granny and Nanny sent, telling Verance to step and get it arranged because Magrat will just piss about (harsh, but not untrue, really), Magrat becomes angry with the other witches and breaks up the coven.

It comes at a bad time, though, as a new group of young witches have sprung up in town, messing with forces they don't understand. This is especially true when Granny and Nanny discover that someone (read: the younger, newer witches) have been hanging out by The Dancers, an arrangement of iron stones meant to protect a soft spot between this world and the land of the fairies. By going up to The Dancers and messing about, the young witches have allowed the Queen of the Fairies to reach across the world and touch their minds. Now the fairies have a way in and, without the might of the three witches the fairies could very well take over the world. So the witches have to make up and play nice to save the say. Yes, in that case, the Discworld is doomed.

One thing the previous Witch books have struggled with is giving Granny a good villain to play off of. In Wyrd Sisters it was the evil Baron and his wife who had a good plan but they failed to execute it at all well. Meanwhile, Granny's sister seemed like the right kind of villain for Witches Abroad -- who better to take on Granny than someone that knows her inside and out -- but the evil sister never really came together as anything more than a vague threat (as evidenced by the fact I can't even remember her name and its only been a short while since I finished that book). Granny is a powerful character, one who has the skills and abilities to defeat any situation (usually just by staring at a problem until it bends around her). If you're going to challenge Granny you have to be even more powerful to even stand a chance.

The fairies are that kind of threat, and otherworldly force that can be reasoned with, bargained with, or made fearful. The fairies are pure evil, sadistic and mean, but their real power is the stories about them, how their fun and nice and pretty and dance through moonlight like delicate, loving creatures. The reality of the fairies is very different from their stories (and from the glamour magic they use to support those stories). Fairies can take over a world because humans already believe fairies are kind and lovely creatures and, due to their magic, the human mind bends to support those stories despite all the evidence. Defeating a power like that requires an iron will like none other. Oh, and iron because fairies are as allergic to iron as vampires are to sunlight.

It's not just that the faeries are powerful but that the Discworld versions of them are also well thought out. There are plenty of myths of the fairies, the Seelie and Unseelie courts, their powers and abilities and the world, but Pratchett uses these stories as just a guide for his own creation. The concept of the fairies being from a different world, wanting to find their way into the world of men, of being ravening little shits that love to terrorize and maim. It all feels like a synthesis of other stories made into something very different and new and very threatening. This is the kind of villain Granny needs to work against -- anything less feels like just another ho-hum day at the office for her.

Even better, though, is the fact that each of the witches get a real plot line to themselves. Granny not only has to deal with the fairies but also a suitor from her past come back to the town of Lancre to maybe rekindle their romance: Munstrum Ridcully of Unseen University. The addition of the Wizards doesn't make this a "Wizard Book" -- this is still a Witches book through and through -- but it does help to connect the Witches to the rest of the world and show that, yes, there is still a lot of history to explore between the groups. Plus, Munstrum as the lovesick puppy gives us a different facet to granny's history and her personality, new shades to explore for the character. This is some needed depth for the crotchety old witch and I appreciate the depth given to her here.

Magrat, too, comes into her own in this book. The past novels tended to treat her like a punchline, someone to ridicule and then ignore, the door mat for the other Witches. Here, though, Magrat finds her own inner strength, forced to rethink her knowledge of the fairies (she's one of those "daft" people that believed the nice stories of the fairies) and then take the scoundrels on when they crash her wedding rehearsal dinner. She has to step up, to save lives and rescue her love, and also to stop being the door mat the other two walk all over. This book does a lot to remedy her character and make her into someone truly enjoyable.

And then there's Nanny. Nanny, sadly, has the least amount of growth in this novel but that's probably because her character is already fully evolved -- she has a loving family, a good life, and knows exactly who she is. There's not much the book can add to that so, instead, it uses Granny as the go between for the other two storylines while, also, giving her the pivotal plan that saves the day. In the end it's really Nanny, not Granny for once, that manages to defeat the villain (in a way) and save the world.

Over all, then, Lords and Ladies is the Witches book I was waiting for. It solves a number of character problems, brings a ton of elements together, and ends in a pretty satisfying way. About the biggest issue I have with the novel is that to really enjoy it and appreciate how it builds the story of these characters, you basically have to read the previous two (much less) novels in the sub-series. This novel is really good but I'm not sure it's that good.