The Power of the Printed Word

When the DiscworldAt first blush, the Discworld series seems like just a parody of fantasy literature. Dig into any of the books, though, and you'll find deep and funny tales of a world just slightly off from our own. A world that, yes, is a flat disc carried through space on the backs of four elephants that, in turn, ride on the back of a giant space turtle. was first introduced (all the way back in The Colour of Magic), the very concept of the world was quite different from where it is now, twenty five books in. The series started very much as a fantasy novel, something to poke fun at the old Conan and John Carter novels (there's a certain John Carter quality to that novel's second protagonist, Twoflower, as a stranger in a strange land). But while the series starter with a novel wanting to poke fun at the conventions of the fantasy genre, it's grown into quite a different beats in the intervening novels. 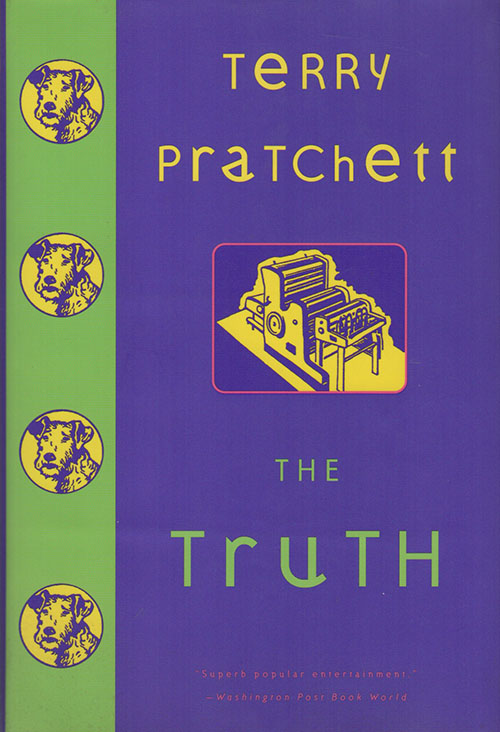 Although this doesn't feel quite like he right word, the nations of the Disc have become more "civilized". It might be better to say they've become more "modern", but however you look at this there's been a push to slowly turn the Discworld not just into a parody of fantasy worlds, but a parody of our own modern times. There were nods towards this before -- the parody of the ear days of the Silver Screen in Moving Pictures, the creation of a shopping mall in Reaper Man, the advent of Rock 'n Roll in Soul Music), but in prior instances the tendency was to have the world revert back to where it had been before. No modern change seemed to take ahold on the Disc for very long.

But then something changed. As they put it in the novels, there was a desire to move "The Century of the Fruit Bat" (i.e., get with the times). Suddenly the world was moving forward with new technologies and new ways to do, well, everything. The first step of this was the Semaphore Line, communication first noted in the "Watch" books before growing move useful to the point that everyone is using the tech, looking for messages from all over the world and being able to send their back via "c-mail".

And with words being so very important, it was only a matter of time before Ankh-Morpork received its own newspaper. This was actually a huge development (if you're read this whole series up to this point) because, up until now, movable type hasn't been allowed anywhere on the Disc. As characters have noted, time and again, words have power. That's especially true on a world where magic lives in everything and magical words (and the books that house them) can practically be alive. The fear was always that if movable type was used for the printing of magical books and then the letters were reused, the letters would remember the magic. As such, you just couldn't have movable type.

But leave it to the dwarves, those headstrong individuals that take a very practical view of everything in the world (is it a gem, or gold, because if not it's just a thing and things can be dealt with), to charge ahead with a printing press. Although not the first people to ever come up with movable type they certainly were effective at finding the materials, putting them together, and making it work. That's how the first newspaper comes into being in Ankh-Morpork, from the dwarves. Well, and our protagonist, William de Words.

As with many of the heroes in these novels, William is the right man for the right task who shows up at the right time. Not because he seems particularly special in any way but simply because he has the right bearing and attitude to make a particular job work. When William stumbles upon the dwarvish printing press, in the hopes of simply getting his monthly newsletter (which he was paid reasonably for by a small selection of nobles around the continent) printed, he ends up accidentally creating a newspaper with the dwarves and, very quickly it has to get published, regularly, because suddenly "news" starts happening everything (at least, for a certain definition of "news"). And then, the leader of the city, Lord Ventinari, seemingly attacks his head clerk, apparently being interrupted in an attempt to steal a giant pile of money, and William's "Ankh-Morpork Times" has a real story on its hands: conspiracy, murder, and potentially the framing of an innocent man. Suddenly the news never seemed more important.

The Truth is an interesting story, a novel designed specifically to fill a gap missing from the Disc and to bring yet another piece of the Modern world into the Discworld (very soon we'll have many more of these kinds of tales). As an introduction to the idea of newspapers, and how a city starved for information would suddenly view a limitless supply of "news", it's quite a fun book. I manages to get a full and realized idea of "the news" from the perspective of a single character (almost the entirety of the book is told from the perspective of de Worde) and let us see just how much this innovation is changing the city, even in short order.

That said, the book does have a major flaw: it's primary mystery -- what happened with Ventinari and, if he didn't do it than who really did? -- just isn't that mysterious. That's because the culprits behind the whole plot (well, the henchmen responsible for the dirty work) are revealed near the start of the story. While I can understand the desire to have a couple of interesting villains running around, the fact is that these two don't add much to the story (one is a weasel who just threatens a bunch of people while the other guy is a series of weird quirks that don't actually amount to anything) but they do remove any doubt about Ventinari's innocence. A real mystery for de Worde to solve, and not just a series of clues we already knew, could have given this story a real edge.

Even with this issue, I do rather like this novel. William is an interesting character, someone with a strong moral core and very definite "thoughts" on matters. The truth is important and, no matter what else he'd do he'd never mis represent the truth at all. That's what makes him the perfect person to lead a newspaper because the facts will be reported by him, unvarnished by anyone's desires otherwise. Around him gather a good collection of characters -- associate editor Ms. Crisplock, Otto the vampire cameraman (who adds an Uberwald connection to the story, finishing out a trilogy of Uberwald-adjacent tales), and all the dwarves. This is a motley crew who remain fun to read about start to finish.

So while the book could have used a slightly more whip-crack interesting mystery it still, on the whole, comes together nicely. And, most importantly, a modern innovation for the Disc shows up, fails to cause everyone to go crazy, proves itself useful, and gets to stick around back the end of this novel. The Discworld really is changing, indeed.