As the sub-series has gone on the "Witches" books have grown on me. Although I'm not a fan of them like I am for the "Night Watch" or "Death", I do still enjoy the fun little parody tales the Witches have told. It does make this 23rd DiscworldAt first blush, the Discworld series seems like just a parody of fantasy literature. Dig into any of the books, though, and you'll find deep and funny tales of a world just slightly off from our own. A world that, yes, is a flat disc carried through space on the backs of four elephants that, in turn, ride on the back of a giant space turtle. book a bit bittersweet, in fact, because this is, in essence, the last of the Witches book to focus on the three main witches -- Granny, Nanny, and Magrat (and four if you could Perdita). After this the series evolves, spinning out a side-series of Young Adult books that (after one book featuring talking rats) focus on a young witch, Tiffany Aching. If you really want to see more of our original witches, well... you won't. 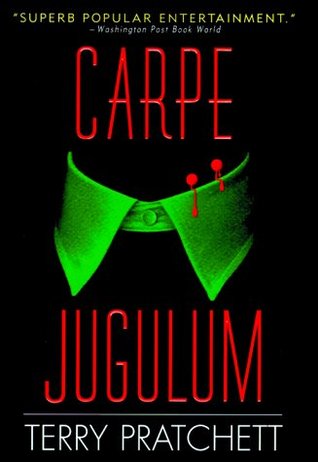 I can understand why Pratchett decided to move on from tales of these three (or four) in the future. For starters, Granny Weatherwax was basically at the end of her story here. Although she's never admit it (because that would be making a fuss), she is the most powerful witch on the Disc. There's really nowhere else to go from there except either the grave or villainous madness, and Granny, with her backbone of steel, was never going to become a villain. She worries about mortality, and her place in the world, but by the end of the book its pretty clear that she's the reigning Witch and all other witches have to come to her. All the world is her coven, in essence.

In the case of Nanny Ogg, she hasn't really had a major plot line in a while. Here she gets a taste of what it's like to be the leader of the coven when, due to confusion about whether she's invited to a naming ceremony for Magrat's new baby or now Granny leaves town to be a wildwood witch away from everyone (because she thinks no one needs her anymore). Nanny is not suited to be the leader but that's about as far as the story delves into it -- she tries, she shrugs, she moves on since inevitably Granny shows up again to handle matters (as she always does).

That matter in question that needs handling: vampires. King Verence (husband of Magrat), sends out invites to all the dignitaries around the world and, wouldn't you know it, he invites a family of noble vampires, the Count de Magpyr and his clan. They immediately setup shop at the castle (because they were invited), and it's up to the witches to find a way to stop them (which is easier said than done since, once you invite a vampire in you cede all your power to them). How do you get vampires out of a castle when they've been invited? Through trickery and mind games, all of which are Granny's specialty.

I liked the idea of the vampires more than I liked the actual characters. The Count is obsessed with bringing his family into modern times, getting them over their fear of sunlight, of holy items, or garlic. It's all in their mind, he says, and over the years he's trained them to not be afraid of the weaknesses vampires traditionally have. It's a neat idea in practice, but the problem is that the County and his flock aren't really well sketched in characters. Characters like this need time to develop, not only to become effective villains but also to be interesting characters. Relegated to the villain role of this book, with so many other A-plots and B-plots going on (as any good Discworld book would do), his ideas come across as a barely sketched collection of tics. A set of tropes for the book to parody but not really development for a character.

I think this is really an illustration of the big issue with this book: it has so many characters with all their different needs -- not just Granny and Nanny, Magrat and Perdita, but also the villains, their associates, an Igor, a bunch of townspeople, the newly introduced Pictsies (who we'll get to in more detail in Tiffany's book), and the King, and they all have their own little stories, their own plot points, their own things that have to do. Not all of it amounts to anything, mind you, but it's all pull in the book in different directions over the course of its complete length. It's kind of a mess.

That probably goes a long way to explaining why, after this, the Witches books focus on a new, young character instead of these same gals one more time. Where can Granny or Nanny or Magrat go now that they've each settled into their own lives as wise elder leader of the witches, or as the head matriarch of her entire clan, or as the queen of all Lancre? Sure, they can show up for cameos and be their delightful selves time and again, but it's hard to see them having a storyline that would really lead them towards some kind of growth at this point; they're already fully-grown characters.

Perdita is the one character deserving of more. Introduced back in Maskerade, Perdita (or Agnes, or whatever she wants to be called) was supposed to function as the new Magrat (with that character going off to be a queen and a mother). Here, though, she feels at times like a fourth wheel, a character awkwardly made to fit into different roles depending on which witch is missing from their trio of four at any particular moment. What the book fails to do, though, is establish a proper place for her in the group (and considering the fact that she doesn't show up in any later novels in any substantive way, the books never will give her that kind of ending).

It's sad because Agnes/Perdita is an interesting character (when the book isn't making fat jokes at her expense). She has her own special power -- her singing voice which, it just so happens, get retconned into this whole other part of her character, an inner voice -- and between her two minds she has the ability to defy the mind-powers of the vampires. "Oh, you have hypnotic force? I can ignore than with my other mind." I like the development the book starts to five Agnes/Perdita, but this novel doesn't finish the job (and we'll never see further about it after).

Really, the best and most lasting factor of the book, then, is introducing Uberwald, the land of vampires, werewolves, and other creatures that sits off towards the hub from Lancre. This is the first book to really discuss that nation and, over the next few novels, more and more development will be added to give us a clearer sense of Uberwald and its place on the Disc. Having a land that houses vampires and werewolves, like a version of Ravenloft stitched into the Disc, is a neat idea. We don't get to see a lot of it -- just a town, a vampire's castle, and the resident Igor -- but what the book showcases I rather like. Like everything else in the novel, though, we only get a little sampling of Uberwald before it's time to move on again.

Carpe Jugulum feels like the start of a larger adventure, not the end of a saga. And yet, because this is our last real adventure with Granny and her coven, an ending it is. The Witches will go on but we won't be there with them most of the time. Instead, we have to accept this book as the conclusion of their saga and, honestly, it lets them all down. It has too many ideas, many of them good on paper, but not enough time to delve into all of them. Pratchett, honestly, bit off just a little too much here and couldn't quite pull it altogether. The book is fun, like all Discworld novels, but it's hardly a fitting conclusion for the "Witches" series.