It's a Rat's Life

Discworld Book 28: The Amazing Maurice and His Educated Rodents

Terry Pratchett regularly had fun parodying fairy tales and fables in his DiscworldAt first blush, the Discworld series seems like just a parody of fantasy literature. Dig into any of the books, though, and you'll find deep and funny tales of a world just slightly off from our own. A world that, yes, is a flat disc carried through space on the backs of four elephants that, in turn, ride on the back of a giant space turtle. series. Many of the "Witches" books were built on the premise of taking a known story -- Macbeth in Wyrd Sisters, Cinderella with Witches Abroad, A Midsummer Night's Dream in Lords and Ladies, and of course Phantom of the Opera and Maskerade -- but there was always a twist, something that poked a hole in the story or changed it in a way that twisted everything around. 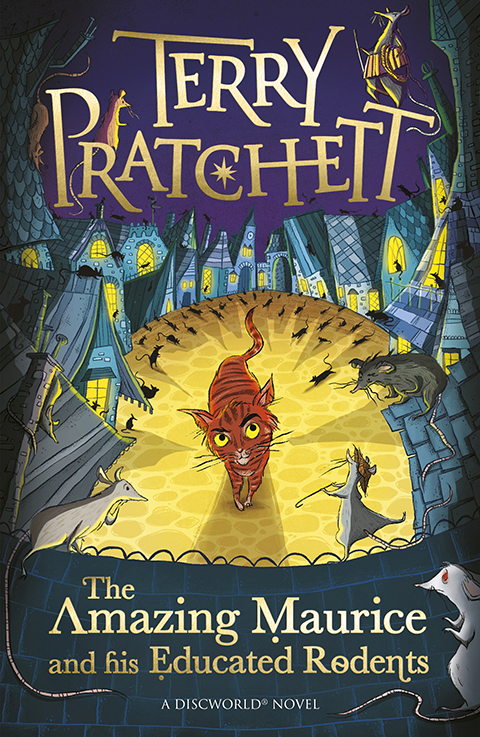 That's the same intent with the first of Pratchett's YA books set on the Disc, The Amazing Maurice and His Educated Rodents (although sans the Witches). Here the tale being twisted around is that of "The Pied Piper of Hamelin", although with the usual Discworld flair, which in this case means talking rodents who grew smart on the refuse from Unseen University (notable as this is also how the world's only talking dog, Gaspode the Great, gained his sentience and learned to talk). How these "Educated Rodents", their own piping lad, and the intelligent cat that acts as their ringleader, play into the story is what really bends it around.

What's interesting about the original story, made famous by authors such as the Brother's Grim, is that there was probably some small grain of truth to the tale. Hamelin is a real village in Germany, and the tale truly did originate there, probably as some kind of fable about the plague -- the fleas on rats being the primary source of the plague, of course. Over time the story twisted and took on fantastic aspects until it became the story we know now. Of course, with the Discworld, everything morphs and twists when it's put through this world's comedic filter.

The Amazing Maurice and His Educated Rodents we're introduced to Maurice, a talking cat, the "stupid looking boy", Keith (who is also a piper, although really he can play any instrument put in front of him), and their pack of "Educated Rodents" -- a batch of smart, talking rats with names like Peaches, Inbrine, Hamnpork, and so forth; names they came up with reading labels off of trash. This group moves from town to town, playing the "Pied Piper" trick on towns, with the rats moving in first, mucking up food, swimming in milk, and tap dancing across counters (well, only one rat does the tap dancing). Then Keith would show up, offer his services for a fee, and then magically as he played all the rats would leave town. It's a good con, and was helping to fund the plans the rats had for their own rat island where they could live free.

The rats, though, had grown conflicted over time, thinking the con was very wrong. Maurice talks them into "one last job" before they all go their separate ways. That's how they all end up at Bad Blintz, a town already seemingly beset by a rat plague. The people are starving, the town is broke, and the only people that seem to be making a decent living are the rat catchers. But, when the rats explore the underground of the city they find a lot of traps, and a lot of rat poison, but absolutely no rats. What could be going on in this town? Who is behind the missing food and all the problems? And what else might be lurking underneath the city?

The best part about the book is certainly the rats. Calling themselves "The Clan", the rats are a varied and interesting bunch. The way they go about their business, moving through the tunnels in teams, taking out poisons, traps, and other dangers with efficiency before getting into mischief, is quite interesting and gives the book a certain tone of adventure that really suited the story. Plus, the rats on their own are fun characters, from the hyper-intelligent Dangerous Beans and his protector, Peaches, to Darktan, the leader of the Trap Disposal Squad. There's depth and variety to the characters, making for a very engaging side to their story.

Maurice, on the other hand, isn't nearly as interesting a character (this despite him getting top billing on the book). He's essentially Rincewind in talking-cat form. Maurice is a con artist and a coward, one without any real skills who gets by leeching off others. Maybe that's a harsh assessment of both the characters (Maurice and Rincewind) but it also seems fair. The point of the characters is to force them into heroic situations (which the book does do with Maurice), but it never feels like the cat (like the Wizzard) actually learns anything or grows as a character. He starts as a con-artist and ends the book as a con-artist. And since we don't see him again after this novel, there's no way that any progression he might have made can come to fruition down the road.

In all honestly Keith isn't that great a character, but then he's not really the protagonist of the story. He's there to aid the rats, and the cat, but he's an assistant, not the main figure. Plus, the character he's paired with -- Malicia, a local girl obsessed with fairy tales -- is really annoying. She's a drag on whatever story Keith might have been given, and the pairing of the two of them really doesn't go anywhere when it comes to character growth. Both of these teens end the book right where they started, which is disappointing.

Frankly, Malicia is another annoying female character in a long line of annoying female characters in these books. Pratchett is fantastic at writing male leads who are varied and interesting and get to shine, but it seems like every one of his female characters end up having a ton of flaws and are immediately taken down a few pages (and then harassed and made fun of throughout their books). Even the Witches -- Granny, Nanny, Magrat, and Agnes -- are all the butts of their own stories despite also being the heroines. This isn't something the series is really able to correct until Tiffany comes along in the next YA book.

I love the rats in this story, but they're only effectively half the novel. Their part of the story is fantastic, don't get me wrong, but the rest of the novel around them is a real snooze. That might be why I barely remember anything about this novel each time I come back to read it again. I've been through it three times now and each time I finish I sit there going, "so... what actually happened?" It's a pity, too, because this is the only books the rats get and then we never see them again. They deserve a better story, one that gives them more to do and a broader adventure to explore. This book barely scratches the surfaces of these characters and I want to spend more time with them. Maybe it would have been better if it had just been "The Adventures of the Educated Rodents"; Keith and Maurice maybe should have stayed home for this one.