Too Much Magic Can End the World

When it comes to magic, it's already been clearly established that wizards of the DiscworldAt first blush, the Discworld series seems like just a parody of fantasy literature. Dig into any of the books, though, and you'll find deep and funny tales of a world just slightly off from our own. A world that, yes, is a flat disc carried through space on the backs of four elephants that, in turn, ride on the back of a giant space turtle. aren't supposed to engage in sexual congress (or even vaguely sexual activities) because those kinds of activities dilute the magical energies. But what if there was a deeper reason for this ban on on fun, frolicking activities? Maybe wizards don't engage in this kinds of events because it can lead to some very dangerous consequences. Wizards, as noted in Equal Rites, come about from various special incidents, like someone being the eighth son of the eighth son (because the number 8 is powerful on the disc). If a wizard were to have children, each child would be a natural adept, but their eighth child would be a wizard cubed. A sourcerer (as in a natural source of magic and gifted adept). 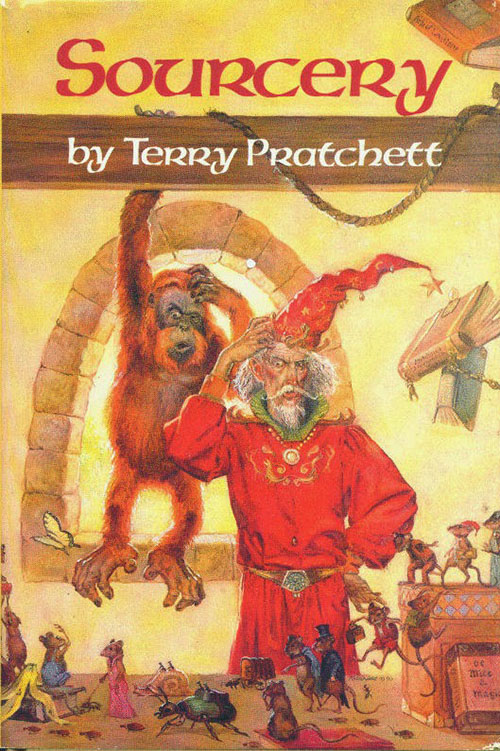 Magic like that hasn't existed on the disc for a long time, not since the early days of creation. Back in those days every wizard could hurl about magic with ease and they did, usually at each other. This lead to the Mage Wars, and part of the disc still bear the magical scars from these battles. Since then, magic was calmed and wizard all over agreed to a set of rules and principals to prevent these kinds of wars from every happening again. Adepts still get on like a house on fire, but their focus was turned inwards to climbing ranks at their universities and back-stabbing each other at dinner time. The wizards of the modern disc are different, less power hungry, than they used to be. That is until a natural sourcerer, Coin, once again crops up on the disc. Soon enough magic starts flowing across the world. It's only a matter of time before the Mage Wars begin anew. And wouldn't you guess it: Rincewind is right in the middle of it all.

As I've clearly noted in the past, Rincewind is not my favorite character. A natural coward who runs from everything, he never really steps into the hero role which, then, means he also never grows as a character. Sure, he's good at running away from danger, and seeing him get stuck in it time and again is good for a laugh, but that's a joke that wears thin the more often it's used, and Rincewind shows up a lot in the early books of Discworld (not to mention a number of video games that were also created for the series).

That said, I do like Sourcery more than the previous two Rincewind-centric books in the series, The Colour of Magic and The Light Fantastic. In part that's because there are interesting characters around Rincewind that make the novel much more enjoyable to read. The first is Conina daughter of Cohen the Barbarian. I enjoyed Cohen when he was introduced before, and Conina as fun of a character as her father. She's a natural barbarian (playing on the idea that traits, like fighting and magic, carry through the blood) but all she's ever wanted to be was a hair dresser. She whirls through battle, her knives and swords whirling, but she's as dangerous with a blade as she is a hair comb. She serves as a great foil for Rincewind (the perpetually afraid) and helps to keep the book moving forward at a solid clip.

The second new character introduced is Nijel, a barbarian just starting out in the field. That's literally, too, as he's been on the job all of two days having read a number of books about barbarians and figuring he'd better give it a go. He walks through life with his weak muscles, reading glasses, and long underwear beneath his woolly barbarian garb, and tries his best (even though his best isn't enough). While I like Conina and Cohen has ideas of how the disc can take the barbarian trope and push it to its limits, Nijel serves as an even better parody. He's someone that has taken the barbarian ideal to the other extreme: you don't have to be born a barbarian to want to get into the life, and by jove he's going to.

And then there's also the luggage, the magical (and sentient) prop that always follows Rincewind around. The luggage wasn't much of a character in the previous books, but here he's given more personality and style. While he still doesn't talk (because it's an animated steamer trunk), the Luggage still gets a number of great moments carving a path through the world with blood vengeance.

Really, it's the wizards in general that betray the book, which is funny since it's supposed to be their book. This book spends a lot of time on developing the wizarding culture of the disc, but none of it really matters. The wizard character aren't memorable, and very few of them have any real bearing on the climactic scenes of the novel. Wizards as a whole are the bad guys here, but not one of them actually serves as a good antagonist for our heroes.

The evil and danger of the book come not from the people in power but from the magic itself. This much magic can cause devastation all over, and we see any number of those consequences around our heroes (as they regularly run towards, or away, from it). it would have been helpful, though, to actually learn about the wizards and develop characters in the University that we could have actually cared about. Instead, half the characters are toadies to the sourcerer, Coin, and the other half dies by his hands. The book wastes the wizards instead of exploring them.

Coin isn't even that interesting. He might be a sourcerer but his actions aren't really his own. His father cheated death and put his soul into Coin's staff, and that staff has been guiding the child ever since, forcing the boy to be evil even when he never wanted to. Essentially the child has no agency of his own and only regains his power (and, honestly, becomes interesting) at the climax; before then, he's a void, powerful but uninteresting.

Sourcery ends up having implications for the wizard books in the series going forward, largely because an entirely new cast of wizards has to be introduced by book's end, and, thankfully, most of these stick around for a while. It also conveniently soft-boots the old books as well, using the mage wars as a possible excuse for why so many places Rincewind visited before now are never mentioned again (probably because they were wiped off the map). It's a good bridge between the books that came before and what would be released afterwards, but as a stand-alone title, Sourcery leaves me wanting. I've read it a few times now and it missing that spark that would make it great.

Thankfully Rincewind, and the wizards, will take some time away as we explore new lands, and new characters, in the new two books to come...