Danger Is the Other Way

The first book in the DiscworldAt first blush, the Discworld series seems like just a parody of fantasy literature. Dig into any of the books, though, and you'll find deep and funny tales of a world just slightly off from our own. A world that, yes, is a flat disc carried through space on the backs of four elephants that, in turn, ride on the back of a giant space turtle. series, The Colour of Magic, isn't the easiest read. I mean, yes, it's a light and happy book that's easy to get into and enjoy your first time through the series. If you're a fan of the series, going back to read the first book is a bit rough, though, just because the world it describes feels far removed from the Discworld that eventually forms in the series. Beyond Rincewind and the Luggage, there aren't any characters that will appear again later in the series, and just about every place the travelers go (after they leave recurring city Anhk Morpork) is a place we'll see in the book and then never visit again. It's a weirdly closed off novel that just so happens to start a series. 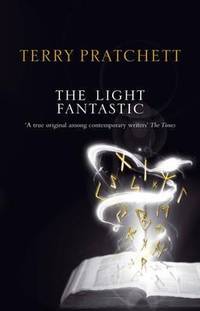 And then there's the ending. Or, really, the lack of one since The Colour of Magic ends on a cliffhanger (the only book in the entire series to do so). It's a funny move when you view the first novel as an adventure serial aping the style of the old barbarian adventure stories that used to get published in magazines (like Conan and the like). It doesn't make for a solid, self-contained novel. It's just kind of annoying in that regard.

Thankfully, the second novel in the series, The Light Fantastic, picks up immediately after the events of the first. After plunging to their deaths off the side of the world, Rincewind, Twoflower, and the Luggage are magically transported back on to the disc. Why? Well, remember that Rincewind has one of the eight forbidden spells trapped in his head (this is part of why he's such a terrible magician, beyond a complete and utter lack of any talent for the craft. since the spell scares off all other spells he tried to learn). It seems that these eight powerful spells all have lives of their own and the spell in Rincewind's head didn't want to die so it transported the "hero" back on to the disc. That's a good thing, not just for Rincewind but for the whole world, since the disc is in trouble and all eight of those powerful spells will be needed to save all of civilization. Now the spell just has to get Rincewind on board with being a hero long enough to save the day.

In many ways The Light Fantastic is an improvement over The Colour of Magic. While the first book very much felt like ab adventure serial -- Rincewind and Twoflower travel to a new place, run into (and away from) danger, solve the problem, and then it's on to a new place for a new adventure -- the sequel tells a much more focused story. On the one side we have Rincewind and Twoflower, along with new companions Cohen the Barbarian and recently saved sacrifice Bethan, traveling the world running from a bunch of people going crazy (because the world is going to end, naturally), and on the other we have the wizards of Unseen University who are trying to capture Rincewind so they can use the spell trapped in his head. Everything in the book revolves around the apocalypse and the various factions working to stop it (or aid it).

Having an actually through-line plot aids the book a lot, giving it far more momentum than the random adventures of Rincewind and Twoflower in the first novel. Now we're not just watching people get into danger over and over again simple because that's what happens. This time there's an end goal, a reason for these characters to be on the run, and something that, in the end, they will actually have to confront and solve. This really pulls The Light Fantastic together in a way the first book just couldn't manage.

Let's be frank: giving Rincewind something to do makes the character at least slightly more tolerable. While Rincewind still isn't a great character as he doesn't really have much of an arc even in this novel. He goes from cowardly, terrible wizard at the start of the book to cowardly, terrible wizard by the end of it, and about the only thing that changes for him is that he no longer as the spell in his head. It doesn't feel like he really earned his resolution -- spell free and once again enrolled in the university -- as he survived long enough that it became inevitable.

Thankfully the book does give us a new character to latch on to instead: Cohen the Barbarian. Cohen is a great character, fully realized in a way the best Discworld characters tend to be. Cohen is a barbarian so renowned in myth and legends that the stories of his adventures are still told far and wide. The thing about being a barbarian that good, though, is that only Death himself ever has a chance of taking the hero down, and even Death would be given a run for his money, so Cohen is still traveling, still adventuring despite the fact that he's 80 years old with a bad back, clicking knees, and no teeth. Even in this state Cohen is still five times the hero of anyone else. From the moment he's introduced we have a clear idea of who Cohen is, what his capabilities are, and why we should root for him. He's a great character, and a great parody of the barbarian heroes from the old serial stories.

Cohen as exemplifies the kinds of parodies Discworld is capable of. The disc is a heightened reality, a place that's not dissimilar from our own world, but each time a new idea or concept is introduced, it has to get carried to it's obvious and natural conclusion. In the case of Cohen, the thought is thus, "what happens when you have a barbarian who's the best hero on the planet? He's going to live forever, not as an immortal but to such an elderly age that only time itself will be able to kill him." The best parodies shine a light on something and take it to a believable (and hilarious) extreme, and that's what Discworld does best. Cohen is a harbinger of the finely-crafted parody to come.

Still, not everything about the book is going to work for long-time fans of the series. While the world seems similar to the disc we eventually know, it's still a little off. The wizards of Unseen University, for instance, are organized in a way very unlike how they eventually shake out in later books (admittedly because of events in the next wizard-focused book, Sourcery). There are also, still, plenty of places explored in this novel that won't show up again later in the series. Even the big bad guys, the demons from the Dungeon Dimensions, eventually fade to the background, barely mentioned after the first few books. At a certain point the series matured and many of these early concepts and settings just weren't viable in the long-form setting of the books.

As a conclusion to the first book, though, The Light Fantastic works. It creates a satisfying second-half for the first novel, and gives all the characters involved a decent, proper ending. The series still has a ways to go before it becomes the Discworld we know, but even here it has that glimmer. The novel is fun and funny and a good start to the eventual 40-novel long series to come.