When the Women Go to War

I have been a touch critical in the past of the way the DiscworldAt first blush, the Discworld series seems like just a parody of fantasy literature. Dig into any of the books, though, and you'll find deep and funny tales of a world just slightly off from our own. A world that, yes, is a flat disc carried through space on the backs of four elephants that, in turn, ride on the back of a giant space turtle. has handled its female characters in the past. Most of the heroes of the series are men, but the times where there have been female characters that either aren't the focus or, in the case of the Witches, are somehow a source of ridicule even as the series tries to elevate them at the same time. It's an awkward way for the series to treat one of the two genders. 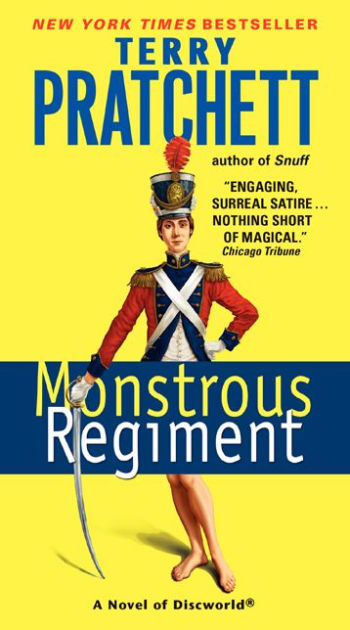 Most recently, thought, the series has done a turn around, finding a better way to handle the female leads of the series. Tiffany Aching, the newest (and littlest) witch, was introduced in the previous book, and she's a real, solid, well-written female character. And now, with the next novel, we have an entire batch of strong female characters. This is the Monstrous Regiment, and it's a novel all about reinventing the direction of the Discworld series.

We're introduced in this novel to Borogravia, a land under the "guidance" the god Nuggan. Nuggan hates, well, everything, not limited to chocolate, garlic, children, proper farming techniques, and women. Nuggan, really, is a pretty stupid god, all things considered, but he regularly released new commandments for his followers (called "Abominations"). His religious book is, quite literally, a living document, constantly updating itself as the god comes up with new things for his country to hate.

Of course, with a country this messed up, it has a lot of people that are constantly tied up in knots about what to do. So, for the most part, they just go and declare war on every other country around them. It's made them the enemies of everyone else, to the point where there's an alliance of all the other countries, all of them united to take down Borogravia. And in the middle of it all is Ankh-Morpork, all because the clacks towers (that the city owns) are considered Abominations (so the Borogravians burned them down).

Into this mess is dropped Polly, the daughter of a barman (who owns his own tavern). Polly has a brother, Paul, who is a simple but sweet man. A year ago Paul joined the war to fight for Borogravia, and then hadn't been heard from much since. So, to find a way to save her brother (if he was still alive) and maybe do her bit for Duchess and country (as the land is ruled by the Duchess), Polly cut off her hair, threw on some pants (an Abomination, to be sure) and joined the war effort. Little did she know that the group she joined would suddenly have a lot of secret women in it.

Credit where it's due, the book manages to craft a large number of interesting women. There's not only Polly, of course, but also the cook/quartermaster Shufti, fire-starter Lofti and her defender Tonker, and the doc Igorina. These ladies (all of who pretend to be men to join the war) have their own stories, and the novel slowly hands those out, tells us why they joined and what they hope to gain. They're real characters, real people, the book excels because of it.

If there's a flaw with the book it's that so many men in the story end up being women. The trick, that there's more than one woman that joined the unit, becomes more and more of a joke until, eventually, it stops even being a joke anymore. It's gag that runs on a little too long, even leading in to an ending that's a touch too convenient. I like the construction, and I think the focus on these women is great, but the novel is a little too willing to run with it to the point where it's beyond ridiculous. That part just doesn't work.

But the lead up to it, with just bonding with the women and discovering over time who they are, is fantastic. And, really, it's all united by Polly. Unlike other books in the series that will often bounce between characters and perspectives, Monstrous Regiment is focused solely by Polly. Yes, there are a couple of brief moments early on that that focus on other characters (Sam Vimes, mostly, acting as the political arm of Ankh-Morpork), but Polly is the dominant story-teller here, which is smart. It ups the tension, since Polly doesn't know how many people in the regiment are women, and it increases the mystery as well as the tale rolls on.

If there's any other character that takes a part of the focus its Sgt. Jackram, the de facto leader of the regiment. Jackram is a force, strong and tough but also super protective of his "little lads" (as he calls the squad). Jackram is our guide through the war, our instructor on how to be a good soldier, and the toughest mo-fo in the war. He balances Polly (even thought he story never comes from his perspective) while also serving as her guide and compass. Jackram is a great character, and between him and Polly, the book finds its legs.

In many ways, this book is one of my favorites -- funny and quick paced with real characters we can enjoy. The first three-quarters of the book, focused on the ladies as they navigate the war (a war that Borogravia is losing), is fantastic and it's the reason this book is one of my favorites in the series (I've read it almost as many times as I have all the books from the Watch sub-series). It's that last chunk, though, where everything falls apart, and even then it's not that bad. It leads up to a twist that doesn't quite work for me. Even still, it does have a satisfying conclusion for a number of characters and it ends in a way that really pays off for Polly (and Jackram as well). It's not a perfect novel, but it does a lot of things right and provides a pretty solid adventure all around.

And, thankfully, the series really start to do well by its female characters as it goes forward. Thank all the gods (except for Nuggan) for that.