A Tiny Tortoise to Rule Them All

As much as I might rant and rave about the DiscworldAt first blush, the Discworld series seems like just a parody of fantasy literature. Dig into any of the books, though, and you'll find deep and funny tales of a world just slightly off from our own. A world that, yes, is a flat disc carried through space on the backs of four elephants that, in turn, ride on the back of a giant space turtle. books, poking at the inconsistencies and grousing about the flaws, I do it from a place of love. These are books I deeply enjoy and, even with the ones I like the least, I've reread them over and over again. This is easily my favorite book series so when I grouse about details in the book, it's because I know the series can do better. 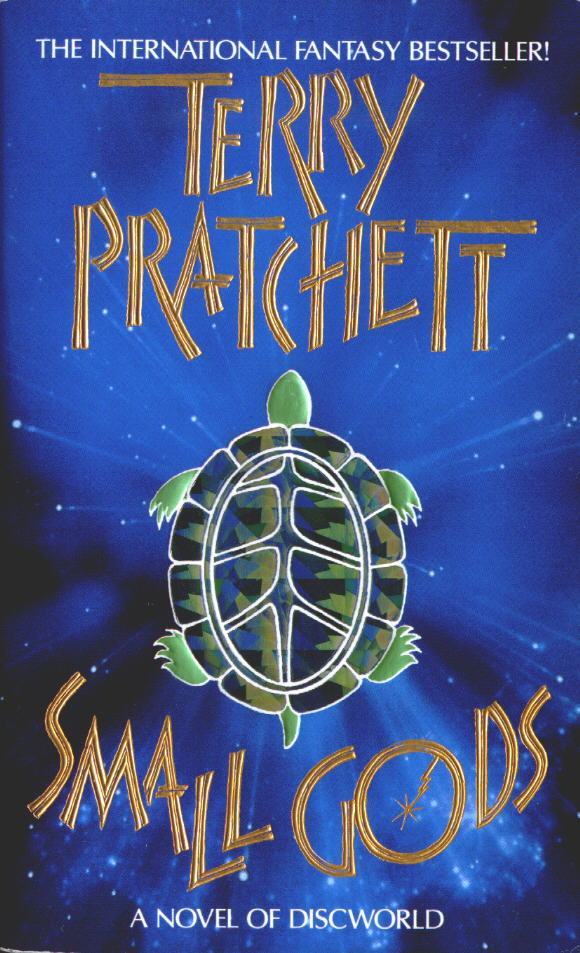 With Small Gods, though, I have very little to complain about. This is easily my favorite book in the series. It's a self-contained story about Omnia, a country never mentioned before in the series but emerges, fully formed, in the span of a single novel. But it's about more than Omnia, as the book also explores another underrepresented facet of the Discworld universe: the Gods of the Disc. And the fact that it does it from the perspective of a god who basically has no power, no abilities, and is just trying to keep alive, gives it a unique perspective.

We pick up with Brutha, a low-level accolyte in the Church of Om. Om is the "One True God", and the entire way of the nation of Omnia is built around the ceremonial worship of the god. The thing is, though, that while everyone worships Om, only one person actually believes in him: Brutha. This comes as a shock to Om one day when he goes from his glorious, godly self to a de-powered tiny tortoise. Stuck wandering the Disc in this tiny, slow form. In fact, when outside of Brutha's aura of belief, Om forgets he's even a god, revert to the tortoise form in body and soul. Paired together, though, Om can use Brutha as a beacon and, maybe, find a way to restore his belief. The only problem is the Quisition, the religious order tasked (via bloody violence) with maintaining order in the Church of Om. Lead by Vorbis, a nasty, evil minded priest, the Quisition doesn't really want true belief and they will stand opposed to Brutha, Om, and their eventual religious revolution.

Brutha is an interesting character. Normally overly religious characters are annoying in stories, generally to the point of being preachy as their belief guides them. Brutha, though, is different -- he's meek, guided not so much by his belief as the fear of what would happen if he didn't believe. His belief isn't his only trait, though -- he also has an eidetic memory, able to remember every step he's ever taken from the moment he had awareness. In a way it's a parody of the holy man always being sure of his steps, knowing he's on the right path, because Brutha literally knows his steps so he knows the right ones to take. And then, when he's put on a boat halfway into the story he loses his path -- he can't remember steps on a boat, on water -- which is like him losing his connection to his "way". Brutha is depicted as a simple man (in a way, not unlike Corporal Carrot), but there's depth to him that is subtle and only comes out over the course of the story.

But a lot of the depth, and humor, in the story comes from Om, the small god who acts as co-lead of the story. Om is a delight, an one-time all-powerful god reduced to a tiny form with only a single follower. He used to be able to smite all who opposed him, a lord of the skies with terrible thunder. Now, though, the best he can do is cause a tiny lightning bolt to hit Brutha's head, sharp as a static shock. All he wants, all he craves, is to find some way to regain his power and the only one he can rely on is Brutha. The problem, naturally, is that Brutha believes deeply in Om and it's hard for him to wrap his mind around the idea that his god isn't residing in Dunmanifestin (seat of the Gods of the Disc) but is a tiny turtle hanging out by his side. Sure, no one else can hear the turtle, and the turtle is able to do things a turtle shouldn't be able to do, but that's not a sign of godliness -- if anything it's just a sign that Brutha is going crazy.

The meat of the book, then, comes down to the bond between Brutha and Om. It's their conversations on religion, on faith, on what it means to believe in a god, that define the book. It's worth nothing that Terry Pratchett wasn't religion (I believe he was an atheist, in fact). So a book exploring religion from his perspective would, naturally enough, be a kind of tearing apart of the whole concept of religion. That's how we can get a true believer that's confronted with a god (in the form of a tiny tortoise) that really doesn't care about his people, or the church, but just wants to go back to being a powered being because it's fun. It's how we can have a church that is obviously corrupt as if to highlight that all power institutions of religion will always become corrupt. There's a very strong anti-religion undercurrent to the book and, depending on your thoughts on the matter, that may turn you away from this story.

But then, much of the exploration of religion, while it can be apply to the real world, is really focused on the Disc itself. This is the first book to truly explore what it means to be a god and how they get their powers. Belief is a finite thing and the gods need it to survive. Every believer in a god makes the god more powerful but, by the same token, if the god starts losing followers they also lose power until they're just a tiny creature clinging to one supporter or, worse, a whispering voice in the ether that no one listens to because there's no one to believe in it. The book shows both sides of this, from the all-powerful gods to those just clinging by, desperate to find even one mind that can support it.

It's interesting that the author even decided to explore this facet of the Disc because, honestly, the gods were never really a force in the stories before now. Sure, we did have Pyramids, which explored godliness from the perspective of a pharaoh, but the actual gods to show up in the story were essentially cartoons, illustrations of the mistaken idea that all aspects of a religion have to be correct. Outside that book, though, the gods were often mentioned but never actually paid attention to. The wizards, for example, know the gods exists but they don't believe in them because knowledge and belief are two different things. So this book is the first to really tackle belief and it does it from the perspective of a true believer.

But then while the author clearly wanted to have a discussion about the evils of religion run amuck, the book ends basically with an acknowledgment that religion can, in the right situations, be a force for good. Or, really, that faith on its own can be useful, that people can find what they need in their beliefs, but that maybe organizing it and making it strict and rigid isn't the best idea. It's a thoughtful conclusion to the story, one that really cements the ideas the novel is grappling with and brings them together in a satisfying way.

Plus, of course, the book is really funny. Pratchett was a witty writer and this book saw his writing at the top of its level. That's what makes Small Gods such a satisfying novel. It has big ideas to grapple with but it keeps the story focused. It has a couple of heroes -- Brutha and Om -- that are relatable and interesting, and uses them to explore all facets of the story without ever getting preachy. And it remains, start to finish, a fun read that's hard to put down. Of all the books in the series, Small Gods is the one I've read the most; it's a good book taken from any angle, fun and enjoyable with enough of a message to leave you thinking when you finally finish it.