A Foul Soul Haunts the World

Discworld Book 38: I Shall Wear Midnight

And now we're back with Tiffany Aching once more. It's pretty clear that Pratchett was inspired by Tiffany, giving her a regular novel in the DiscworldAt first blush, the Discworld series seems like just a parody of fantasy literature. Dig into any of the books, though, and you'll find deep and funny tales of a world just slightly off from our own. A world that, yes, is a flat disc carried through space on the backs of four elephants that, in turn, ride on the back of a giant space turtle. series, giving her a tome once every three books or so. In the end, she was about as regular of an actor as Moist Von Lipwig, helping to shape her world and the characters around her as much as Moist reshaped Ankh-Morpork. The world of the Witches revolves around her now as she has her adventures and wraps the power, and the night, around her. 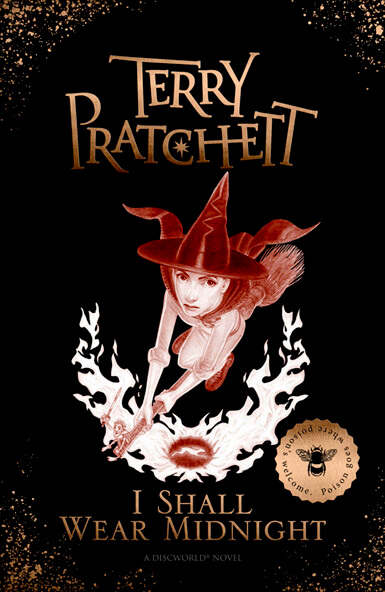 And now that we're back with her there's another danger on the horizon. Of course, that's the way of it in these books. Time passes on the Disc at about the same pace as in the real world, with young characters growing and aging into adults (while most adults tend to stay an indeterminate age), and we naturally only check in with them when they have something interesting going on. For the rest of the time they just go about their business, doing chores and living lives, which might be realistic but doesn't make for a thrilling novel.

So while it seems like Tiffany is only ever seen when she has a problem, it does also make for more interesting stories. Such is the case here as Tiffany has a new foe to battle: the Cunning Man. At "nearly fifteen" years of age, Tiffany has had plenty of adventures and gathered more acclaim as a witch than just about any other before her, except for maybe Granny Weatherwax herself. Tiffany has seen many foes so far -- the Queen of the Faeries, the Hiver, the Wintersmith -- and she's handled each of them with aplomb. Now, though, the Cunning Man -- the lost and biter soul of am ancient Witch Finder, a nasty ghoul that corrupts the minds around it and sours them to witches -- in on Tiffany's scent and wants nothing more than to destroy her, body and soul.

While Tiffany is deal with this, there are all kinds of local issues that she has to tend to as well. The old Baron is dying and his son (and Tiffany's one-time beau), Roland, will ascend to the throne. He's also getting married, to a lovely is utterly boring girl named Letitia. Meanwhile, Tiffany just doesn't feel like herself -- she keeps making mistakes and making things around her worse. She has to wonder if this is all the work of the Cunning Man or if there's more going on. Could an outside force be affecting her in this dangerous time? She'll have to find out before it's all too late.

As in the previous novels, Tiffany's world is richly constructed. There is, of course, the Feegles on her side, the pictsies that have been a steady presence (such as they are) in her novels, and they once again add some delightful humor and color. I wouldn't say the book uses them as heavily as in the past, although that's also a sign of Tiffany's growth as a character as she relies on them less and less, just as the novel does as well. More and more this is becoming a series about Tiffany, with the Feegles, a group that used to take co-billing with the witch, lending a simple, supporting role.

More time is spent at the Baron's castle as we gather together a new set of characters. Firstly there's Preston, a young guard at the castle and also one of the smartest people in its employ. Unlike the others at the castle who seem to be affected by the Cunning Man's evil magic, turning against Tiffany even though they've known her for years, Preston doesn't seem to feel that evil poison in his mind at all. He remains steady and honest, becoming someone Tiffany can trust in this trying time (as even Roland turns against her).

Meanwhile, Roland's bride-to-be, Letitia, also becomes a major force in this story. As Tiffany eventually learns, Letitia's jealousy toward Tiff, the fact that Tiff and Roland knew each other for years and seemed to have a connection, leads Letitia (a dabbling witch although she never thought she had power) to cast a spell against Tiff, cursing her in a way. This also ended up being the trail that the Cunning Man uses, tracking Tiff and causing troubles for her. Once Tiff confront Letitia, the two become friends, and Letitia ends up learning about real magic and becoming a ally in the fight.

By letting Tiffany have a larger collection of friends around her, ones that aren't witches or pictsies, it helps Tiff craft her own world. Now she's not just a witch, not just living in the world that Granny and Nanny and Magrat created but gets to have her own world, her own adventures. Yes, the witches show up but remain on the sidelines. Yes, the Feegles arrive, but Tiffany makes them swear (under a geas) to not be involved. This is Tiffany's problem and she has to find her own solution using the people around her. Her new allies become her friends, and her friends become her strength.

If I have an issue with this book it's that the ending doesn't quite come together for me. Much like in many of Granny's books, the final solution for the Cunning Man eventually comes down to a dues ex machina that doesn't get well explained and just kind of happens. Tiffany pulls a solution out of her butt and while the novel tries to act like it hinted at her solution it all remains amazingly obtuse. Tiffany solves the problem because that's what the witch does, but it doesn't feel well earned.

Still, on the whole this novel works quite well. Tiffany's world becomes richer, she grows a little more independent, and her steading becomes a little more her own. She the witch of the Chalk and, in a way, is growing to be the most powerful witch in the land, with her novels remaining satisfying because we get to see, and understand, her growth as a character. There's something to be said for the third-person-limited perspective of YA novels as you really learn and grow about characters. Tiffany (to make another unintended pun) is an open book in a way Granny Weatherwax never was, and I enjoy her stories, this one included, all the more for it.

We do have one more Tiffany book to go, one that will close out this whole series. It'll be a bittersweet end when we get there, but the time spent with Tiffany has been great. This novel is another fine entry in her series, one of the better over all of her books. If the ending had been a little better it would have been an absolute knock-out, but even then it's still largely well-told and enjoyable throughout.