We're heading into the final set of books, the last three novels of DiscworldAt first blush, the Discworld series seems like just a parody of fantasy literature. Dig into any of the books, though, and you'll find deep and funny tales of a world just slightly off from our own. A world that, yes, is a flat disc carried through space on the backs of four elephants that, in turn, ride on the back of a giant space turtle. to come out before Terry Pratchett's death. What's interesting to me is how they tie together as they kind of tell an evolving story amongst themselves, that of the goblins, the final race Pratchett would introduce into his world (although they were mentioned briefly as well back in Unseen Academicals. It creates a trilogy, basically, about the goblins and the affect these creatures have on the modernization of the world. 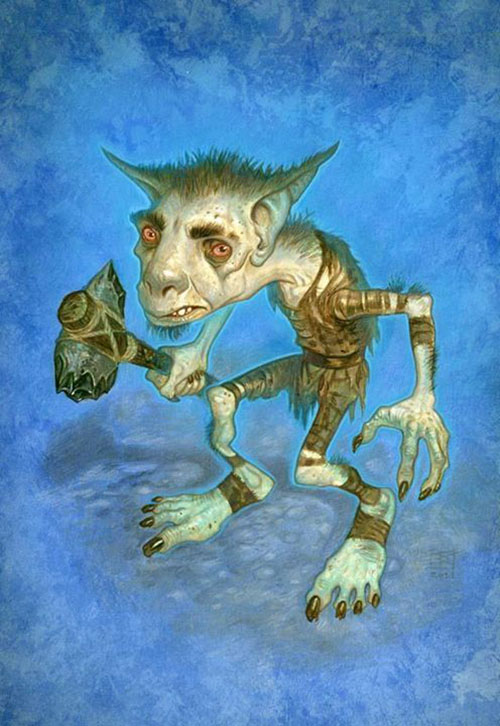 It's really an interesting time for the Disc as, up until now, it would have been easy to argue that the series took place in a kind of Middle Ages but with magic (if we align the Disc with our own Earth). The first book in the series, The Colour of Magic, was basically a parody of the Conan-style barbarian epics, just with the least epic wizard at the center of the novel. Certain additions have been made that moved the technology of the world forward -- the introduction of the clacks in Going Postal!, the creation of Ankh-Morpork's first newspaper in The Truth.

With Snuff we've clearly moved beyond the Middle Ages, even beyond the Renaissance (best exemplified by Leonard of Quirm in Jingo), and have no definitely entered the Regency period of the Disc. That's some fast evolution for the series, but you get the feeling that Pratchett wanted to push the Disc forward as fast as he could, that whatever he was parodying when the series first started he wanted to be able to use the Disc to look at our own world, and to do that he had to give it some technological upgrades.

Not that the series isn't still parodying, mind you. This novel, the last to focus on Sir Samuel Vimes of the Watch, takes place out in the idyllic countryside outside the city. Here, at the Ramkin family estate (which, as Sam married Lady Sybil Ramkin a few novels ago, is his mansion), Sam learns what the countryside is all about, far away from the streets he has memorized and the crimes he can easily see because he's always on alert. But when he starts poking around the surrounding farmlands and nearby town, he stumbles on a case that just might need his specific expertise: that of a right bastard that never lets go of the facts and always gets his man.

When the town blacksmith goes missing, the crime is framed so that Vimes would look to be the one at fault. Vimes, though, continues to be Vimes, talks his way out of the crime, and proves that the entire case was a fabrication -- blood on the ground where he was supposed to meet the blacksmith for a late night chat is proven to be that of a dead goblin woman, and the nearby goblins (a beaten down race of "pests" if ever there was one) attest to this fact. The local constable, Upshot, teams with Vimes to find out just what is really going on, how it ties into goblins (who keep disappearing, often in large groups), and just what other mysteries the countryside just might be hiding.

From the framing of the novel, one would think Pratchett were parodying two different sources: Jane Austen's Regency era novels, and crimes story pulp tales from that same time. Although Snuff occasionally plays with the former, it's really the pulpy crime novels that have its true focus. All threads of Regency-era novels are quickly tossed aside as the book invests fully in its tale of murder and intrigue. Anyone hoping or a long-form tale of Vimes ruining everything for the ladies of the Regency will be disappointed by the novel as that really wasn't what Pratchett was going for.

And, really, by the same metric anyone that was hoping for a murder mystery story will also leave disappointed. Like with many of the "Watch" books, Pratchett hasn't really crafted a mystery here at all. In fact, this is probably the least mysterious novel the author has in his series. Instead of laying out a bunch of crimes and having Vimes put the pieces together, as in so many books in the series, there's just one crime here, it ties to a bigger crime that happened years earlier (the kidnapping a whole swatch of the goblins, making them all disappear), and then Vimes just follows a single, linear trail until he captures everyone involved.

That's not to say the book doesn't have its charms, mind you. Seeing Vimes, a seasoned pro in the criminology department, come to a new location and basically take over all policing is terribly amusing. And by now the relationship between Sybil and Vimes has become quite lived in, with the two playing off each other in the story with palpable chemistry. When you also include Vimes's butler, Willikins, you have a collection of characters that steamroll the world they've moved into, deriving plenty of great moments (and a lot of humor) from the inversion of the fish-out-of-water concept. Instead of Vimes floundering in this new setting, its the rest of the countryside that has to adjust to him.

Really, the story Pratchett wanted to tell had little to do with mysteries or intrigue and everything to do with justice and classes in society. The goblins are a beaten-down race, treated as "less than" by just about everyone else. When, years before, a bunch of them were hauled away to the islands off the Cou8nterweight Continent and made to work on plantations, no one in the surrounding countryside batted an eye. Heck, even after Vimes finds out all about this, the prevailing thought is, "goblins aren't people, so they can't be slaves." This is an unsubtle poke in the eye of our own history, and even our current treatment of certain people, with Pratchett firmly establishing that anyone that thinks like that is wrong.

This novel, really, is the most socially conscious of all the books Pratchett has written. It's certainly the most obviously so, at least. But because of the way the novel treats to goblins it's hard to do anything other than agree with Pratchett: they're people, just like anyone else, and need to be treated as such. People are people, no matter what they might look like, and while the novel might beat it into the readers' heads just a little (or a lot), it's still a message worth conveying.

I don't think, on its own, Snuff is the strongest book in the series, even just among "Watch" novels. But in carrying for a seed from Unseen Academicals, letting it grow and then setting the stage for the next two novels to follow, it is a solid first story for the final trilogy of Discworld books to come. Not the greatest in its own right, but fantastic when taken as part of the larger whole.