Whether Rain or Sleet or Glom of Nit

As the DiscworldAt first blush, the Discworld series seems like just a parody of fantasy literature. Dig into any of the books, though, and you'll find deep and funny tales of a world just slightly off from our own. A world that, yes, is a flat disc carried through space on the backs of four elephants that, in turn, ride on the back of a giant space turtle. transitioned it introduced a few new characters: William de Worde, Tiffany Aching, the fighting ladies of Borogravia. Not all of these characters lead to full series for their characters (the Ankh-Morpork Times would become a fixture in the background of other books, while Borogravia was never visited again), but the occasional new series did eventually rise as other characters (like the Witches and Rincewind) were quietly retired. Tiffany, for instance, took over the world of the Witches, but it was a different character introduced next that was more intriguing. 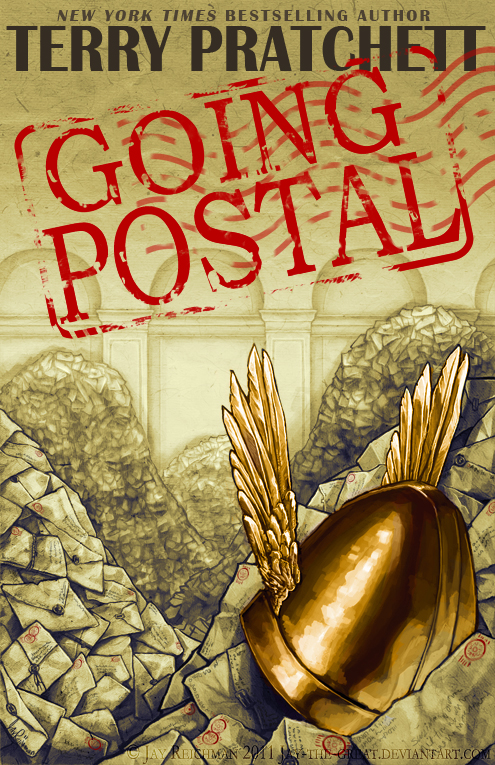 Moist Von Lipwig is a con artists by trade and not the usual kind of character the Discworld books would focus on. Sure, his closest analogue would be Rincewind, a character of low moral fiber and a tendency to run from everything, but where Rincewind was a coward, Moist was a calculating bastard, and I mean that in a nice way. Moist added something needed to the larger series, a perspective not based on magic, of headology, or even justice, but just in getting ahead and not getting hanged by the law. We'd never spent that much time around someone that was a true criminal, at least not where they were treated as the real hero of the story.

But that's Moist's exact role: to play the hero. Caught before the start of the book by Vetinari's guards, Moist was put to death... very nearly. Hanged until passed out, but within an inch of his actual life, Moist was given a new lease by the Patrician, and a single goal: rebuild the Ankh-Morpork Post Office into a properly working machine (with the rest of the threat being the "or else" danging on the end). Moist could be a proper, honest member of society or he could be put back to death (for that last inch).

Eventually accepting the job (after trying to escape once), Moist finds that the Post Office isn't just in need of some help, its in complete disrepair. Once it was a wonderful, well-oiled machine, but that was decades ago. Now it's just an empty building with only two workers, it's floors packed with undelivered letters, and everything covered in a patina of bird guano. Moist will have his work cut out for him if he wants to take this crumbling edifice and make it into anything close to its former glory. But he'll need to work fast because the new Clacks system (think telegraphs) is stealing all the business (and charging an arm and a leg for it) and they don't look kindly on the city trying to rebuild a direct competitor for the Clacks and its business. Death could very well come for Moist from every direction if its not careful.

The Truth certainly opened up the world of Ankh-Morpork, allowing us to see stories beyond just the Wizards or the Watch. The world of newspapers was thrown open, giving the Disc the use of movable type and allowing for the spread of information. This, coupled with the clacks, led to it seeming like author Pratchett was growing his world out of the forced medieval fantasy setting into a more modern era (if not truly modern like we have now then at least something more akin to the late 1800s). Having Moist them come in an upgrade yet another institution, to grow the city even farther, felt like the next right and necessary step.

What's fun about Moist's adventure, though, isn't that he remakes the Post Office but that he does it his way. He's a weasel, a cheat, a huckster and a cad, terms he wears as badges of honor. He knows what he is and his story isn't about growing to be a better person but, instead, to use his skills to help the city grow as well. Moist does have his moments of change (a late development that sees him donate one of his secret stashes of cash to the Post Office being a case in point), but he doesn't change so much that he stops being a con artist. He just uses his powers for good (or a certain definition of good, anyway).

The way Pratchett writes Moist -- and it's worth noting that, like the Tiffany Aching books, this novel is told largely from the perspective of our main character -- he sounds like a realistic con artist. I don't know if Pratchett did a lot of research on cons if this was just a character he created whole cloth, but either way Moist sounds authentic. He has plans and schemes and the way he carries them off (with aplomb) does a service to the story. You enjoy the ride as you travel along with Moist from one scheme to the next, seeing how it slowly fits together while, at the same time, seeing how he does all this, long term, for the good of the Post Office.

This is a character that, by rights, should be a villain. That's one of the things Moist realizes, in fact, as he slowly learns about the consequences of some of his past schemes and what they did to people. He always thought he was a minor annoyance at worst, doing things to "keep his hand in" but that the never really caused anyone any harm. Suckers are duping themselves! Banks are insured! But then he learns that people did have to pay and there were those he suffered because of his schemes and this puts all his past actions in a new light. He finds out he was the bad guy and he wants to change that.

But, again, he doesn't change himself. He keeps acting like his delightful huckster self, he just does it for the "right" reasons now, using his skills to bring down an evil business and save an institution of the city. When he meets a woman, Adora Bell Dearheart (who chain-smokes and has a wicked temper) he learns from her not only consequences but also ways to be a better person. Well, okay, a "better" person, but again for the right reasons. He'll never stop swindling people, but he does it so they get a better deal instead of walking away a sucker. It's a fascinating way to construct a character.

I will admit that the first time I read Going Postal! I didn't warm to Moist. I disliked the book because it was told, effectively, from the villain's perspective. As I've gone back to the story and reread it, though, it's grown on me. I've realized what the book is doing, how it's growing Moist and grooming him, turning him from a villain to a hero. It's a wonderful trick the story pulls, it's own kind of con, and it adds a layer of depth to the whole tale. Going Postal! is great because it shows you, up front, all its cards and then still, somehow, gets the better of you. That's Moist's kind of story.