When I noted a while back that Carpe Jugulum was the last "Witches" book in the DiscworldAt first blush, the Discworld series seems like just a parody of fantasy literature. Dig into any of the books, though, and you'll find deep and funny tales of a world just slightly off from our own. A world that, yes, is a flat disc carried through space on the backs of four elephants that, in turn, ride on the back of a giant space turtle. series, it was with a caveat: the books would no longer follow the direct adventures of Granny Weatherwax, Nanny Ogg, Queen Magrat, and Agnes/Perdita, but that didn't mean witchery in general was no longer a part of the series. Instead, the mantle of "Witch" was being passed to a new character: Tiffany Aching, the smallest (and soon to be one of the most powerful) witch on the Disc. 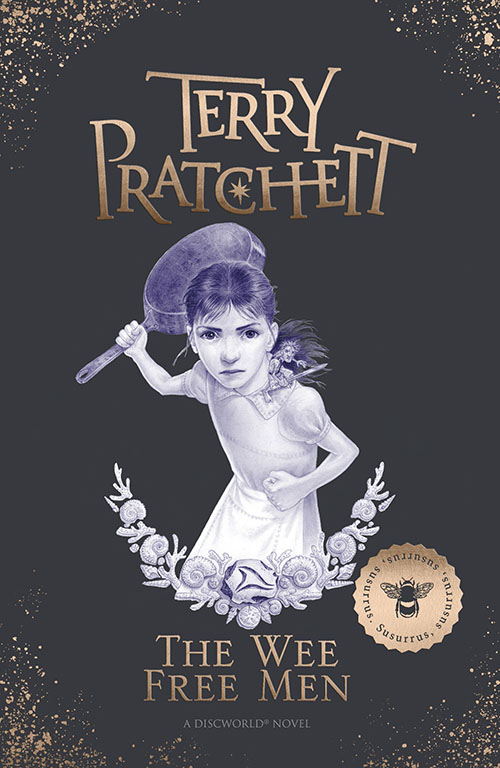 Although The Amazing Maurice and His Educated Rodents was the first official Young Adult book in the series, it's fair to say that the Discworld novels had been trending that way for a while. They started off as parodies of the classic Conan and John Carter stories, with brave men in skimpy leather outfits saving women (in even less) from evil attackers, with just the hint of sex and language to spice everything up. Over the years, though, most of the even vaguely illicit subjects had been ditched, making the books much more palatable for all ages of readers. Most of the books in the series, at this point, could be considered "Young Adult", even if Maurice was the first to official bear that title.

Tiffany's adventures, starting here in The Wee Free Men, carries on this new tradition of Young Adult reading, but I'd venture that it does it with more style and substance than that previous adventure of talking animals. Where the characters in Maurice were barely sketched (and, frankly, a tad annoying), Tiffany is a vibrant interesting character, one you can actually engage with and respect. Plus, she has a whole cadre of fun characters around her (the aforementioned "Wee Free Men") to spicy up her story and give it all the life it needs. While I wasn't a fan of the Witches, I absolutely love Tiffany's tales.

As I noted, Tiffany is a witch, although she doesn't really know that in her first book. A young girl (all of 9-years-old in this first novel), Tiffany wants nothing more than to be like her (recently departed) Grandmother, a wise woman taking care of the flocks of sheep in her shepherding community, the Chalk. Witches have never lived on the Chalk before because the soil was supposedly bad for witch magic -- the soft stone couldn't support the deep, earthy magic of the witches. And yet, Tiffany can tell she's different, able to see things others ignore, to spot the world not only as it presents itself (first sight) but as it really is (second sight, and maybe even third thoughts).

When her younger brother, Wentworth (a boy she doesn't really care that much about, because he's young and annoying and always sticky, as younger brothers tend to be), Tiffany knows she has to be the one to find him and get him back. This is because Wentworth isn't just missing but was taken by someone powerful, and evil, and magical: the Queen of the Fairies. But what can Tiffany, a girl all of 9, do against such a powerful foe? Well, she can grab a frying pan and set off form the world of fairies to bring the stick little tyke back. And, thankfully, she has some assistance: the Wee Free Men, the group of pictsies (like pixies, but tattooed and much more drunk) that live on the chalk. They view Tiffany as their "hag" (witch) and will do anything to help her. So, with that, the clan sets off to fight fairies and save the day.

Here is an unpopular opinion I'm sure, but it's something I've noticed over the course of reading all these books again: Pratchett's Discworld didn't really have a high opinion of women. It's rare that women are the heroes of their own stories, more often relegated as sidekicks or annoying hangers on. Outside the Witches, the only major female protagonist was Susan (Death's granddaughter), and she was, well, kind of a shrew and hard to like (it took me a couple of times reading her books to really warm to her at all). The Witches, too, have a hard time overcoming all the crap the books throw at them, from the disparaging comments about Magrat's looks, to the nasty little comments about Granny's attitude (fair, Nanny Ogg was generally liked for her crotchety, oversexed ways). Women, in general, just don't fair well in the novels.

Tiffany, though, is different. She's the lead of her stories but the books never degenerate her or try to point out her flaws. I think that's because, unlike with the grown ups who aren't generally supposed to be paragons of virtue (Granny certainly isn't), Tiffany is supposed to act as a role model for young girls reading the novels. As such, Tiffany has to be above to usual slings and arrows of the series. It certainly makes for a more enjoyable novel and the heroine is allowed to live and learn without comment or criticism.

Plus, honestly, she's just a refreshing character, interested in the world but also honest about its flaws. She can see the world as it is, but more importantly she can work out solutions to her problems. Yes, she may be assisted by the Wee Free Men (aka the Nac Mac Feegles), but when a problem comes along she's the one to solve it, to guide her "troops", to save the day. She's the heroine of the story, backed up by the pictsies but never saved by them. I really appreciate that aspect of this novels (as well as her stories to come).

And, let's face it, the Nac Mac Feegle are great fun. The pictsies were introduced back in Crape Jugulum as a bit of color, a humorous little set of characters brought into the Disc but never really explored. Here, though, the Nac Mac Feegles get to have a bit of the spotlight so you can learn about the drunken little ruffians, learn to appreciate their culture, style, and attitudes and, honestly, pick up more than a few enjoyably Scottish (or, at least, Scottish-sounding) swear words in the process. They are, frankly, a delight (and, again, they continue through this series of books).

There is just, frankly, so much to enjoy about this story, from the solid heroine to all her colorful characters. Even the villain, the Queen of the Faeries (herself introduced back in Lords and Ladies, gets some exploration, with a better understanding of her powers, her needs and wants, her desires. This book is able to tackle each of these subjects, all of these characters, and make them interesting and enjoyable. And, best of all, it never dumbs down the material -- it may be Young Adult but it never stooped to being "kiddy" (something, I'd argue, Maurice struggled with).

Tiffany, then, is a great character and the perfect lead to take over the "Witches" novels. From here the stories around her only get deeper and more interesting. Tiffany, frankly, becomes the highlight of the latter Discworld novels.